We recently had 420 Day in San Francisco. A slang term for marijuana became a joke about April 20th, and within a couple of years it was an excuse for people to drive to Golden Gate Park from all over the Bay Area to get stoned. It’s a recent thing. A bit older, but not by much, is the SantaCon pub crawl, when people dress like St. Nick and journey from bar to bar, giving everyone the holiday treat of Father Christmases vomiting in streets. What we don’t have anymore—or it’s so underground I’ve missed it—is May Day. 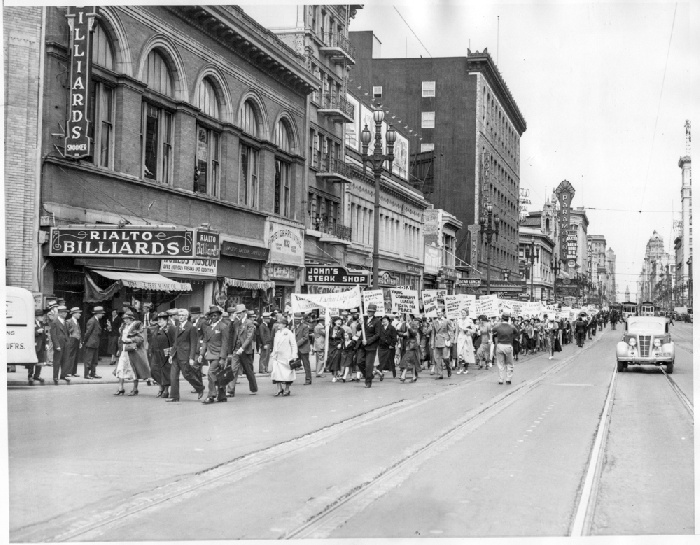 This sort of May Day parade, in support of workers’ rights and social justice, continue today. Market Street at 7th Street, May 1, 1936. (wnp27.2689.jpg, Courtesy of a private collector.)

I don’t mean any of the May 1st pro-labor strikes, ever-hopeful Socialist rallies, or International Workers Day marches that are still held in liberal cities like San Francisco. I mean the pageantry with pagan roots of crowning a May Queen and dancing children braiding ribbons around maypoles. May Day was an actual holiday for San Francisco’s school children in the early twentieth century, when free cookies and milk were served at Golden Gate Park’s Children’s Playground and hundreds of 6-12 year-olds participated in a pageant with mock royalty. 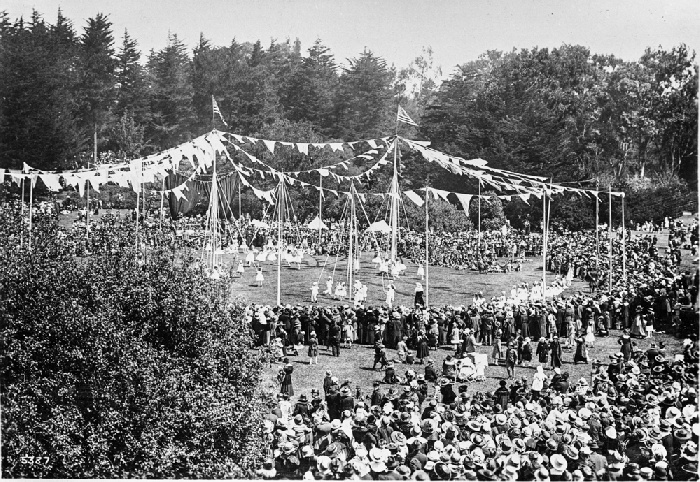 In the early 1890s, May Day events were mostly hosted by benevolent or fraternal organizations and consisted of band music, picnics, and private military company drills. The local post of the Grand Army of the Republic hosted a big event on May 1, 1891 in the Mechanics’ Pavilion at the civic center and just a small part of the lineup was a May Pole Dance, described as “Sixteen young ladies on the ribbons surrounded by sixty young Misses in ballet costume.” Miss Eva Dold Brand was crowned Queen of May, drawn on a cart pulled by dozens of her less fortunate peers. United States president Benjamin Harrison, in the midst of a visit to the city, attended. Queen Brand had a pretty address ready to give him, which began “It is most fitting that the Queen of Utopia should pay her respects to the head of a nation…” Over at nearby Woodward’s Gardens at a different event, Miss L. O’Brien was crowned “Queen of the May,” and I suppose we are fortunate that the two queens didn’t have a war over Market Street with the president in town.1

The Midwinter Fair was in full flower for May Day in 1894, and as part of the exposition in Golden Gate Park four hundred girls between 10 and 12 years old were recruited for a May Day dance on what is today Big Rec ball fields. More than twenty applied to be the May Queen, with the qualifications set forth she must be “a little girl 10 years old and very pretty.” Her court was to number 150. Dance instructor Professor W. J. O’Brien, in charge of the affair, had his hands full with the arrangements, which included a flower-decked chariot for the queen pulled by two ponies.2 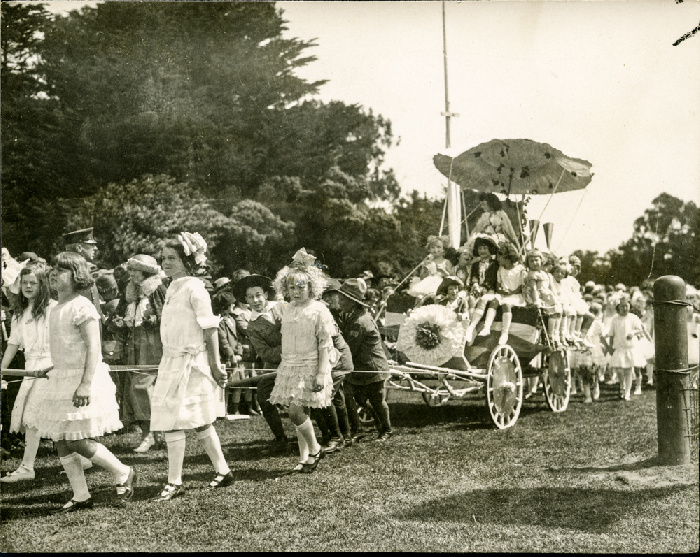 May Queen and court pulled on cart by attendants in Golden Gate Park, circa 1920. (wnp27.4744.jpg, Courtesy of a private collector.)

By 1910, the city park department had become the host of a giant May Day festival in Children’s Playground with maypoles, dancing, games, athletic events, and lots of free food, from oranges to beef sandwiches. The San Francisco Chronicle promised that “every child who takes advantage of the holiday will be given all he or she wants to eat and all the fun he or she can stand.” Scottish and Gaelic dancing schools had begun to emerge as primary participants. As many as 60,000 people attended and fifty police officers were assigned to the event.3

In addition to the giant Golden Gate Park celebrations, neighborhoods held their own pageants and crowned their own local queens. Mayor James Rolph drove all over town on May 1, 1912, to honor four different queens. As the century progressed, the maturing Parkside neighborhood’s May Day pageants crowned a queen from the 1930s to the mid 1970s, and were a must-attend event for the political elite.

The park department ceremony moved to Kezar Stadium after World War II. The photos on OpenSFHistory from that era are a little sad, with the smaller crowds and dance groups diminished by the cavernous size of the stadium. The last queen officially crowned under city auspices may have been Mary Elizabeth Gleim in 1969, as maypoles and May queens ceded the Golden Gate Park stage to hippies, rock concerts, and Vietnam War protests. 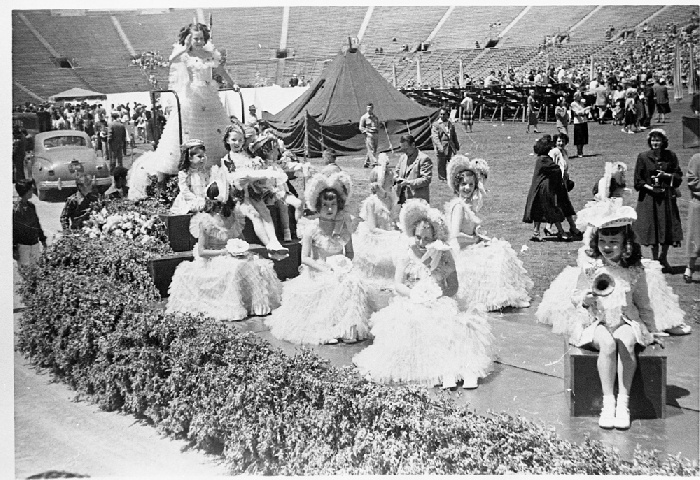