Fifty years ago this week four members of the Grateful Dead appeared at the San Francisco Hall of Justice to face sentencing from Judge Neubarth in Superior Court on marijuana charges. From the news photographs we have in the OpenSFHistory collection, the band was pretty sanguine about their fate. 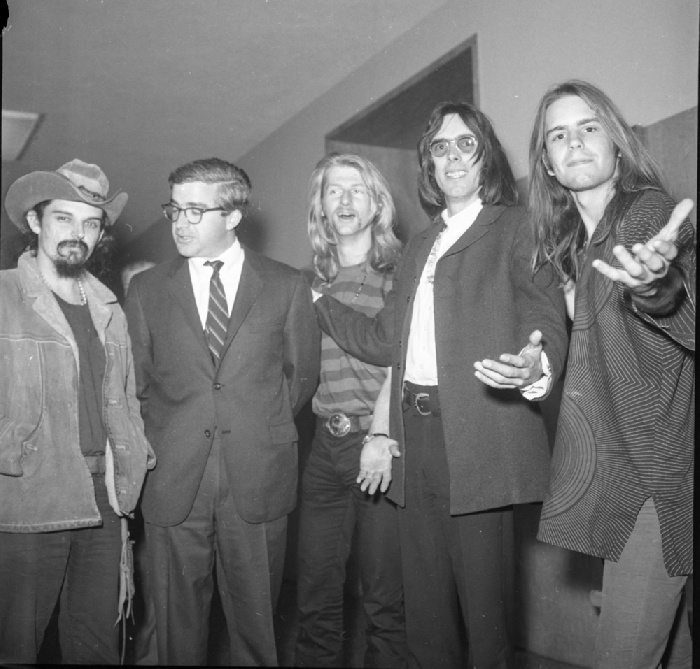 Grateful Dead and friends in the hallway of the Hall of Justice, 850 Bryant, after sentencing for their marijuana bust. Ron ‘Pigpen’ McKernan, attorney Brian Rohan, Robert Matthews, manager Rock Scully, and Bob Weir, June 24, 1968. (wnp28.2450.jpg; courtesy of a private collector.)

The previous October, San Francisco police had raided 710 Ashbury Street, the 13-room Haight Ashbury mansion that the Dead made home, and discovered, no doubt to their shock and surprise, that marijuana was being used by occupants. Today, young professionals line up on Friday evenings to buy cannabis-infused lemon tea cakes from dispensaries that share design aesthetics with boutique olive oil stores and high-end hair stylists. But in 1968 just being in a house where someone smoked pot was a crime.

Rock Scully, the band’s manager, and Robert “Knobs” Matthews, the audio engineer, pleaded guilty to charges of maintaining a residence where marijuana was used. Ron “Pigpen” McKernan (singer and organist) and guitarist Bob Weir pleaded guilty for being present. Fines of $100-$200 were given and all were placed on probation for one year.

Skully, described by the San Francisco Chronicle as “the long-haired group’s long-haired business manager,” very wisely leaned in to the publicity the sentencing offered. He revealed to the assembled press in the hallway that the Grateful Dead (called a “hard-rock band” by the Chronicle) would release its second album the following month, and were looking into taking over the Carousel Ballroom for a Fourth of July concert with Jefferson Airplane, Quicksilver Messenger Service, and Steve Miller.1

Other news photos in the OpenSFHistory collection reveal how long the journey to decriminalize marijuana has been. On September 6, 1964, a handful of demonstrators met in Union Square to continue a series of Sunday marches advocating for legalization.

Union Square used to be the place to get attention for anything: stop nuclear testing, bring the Beatles to San Francisco, elect Richard Nixon president… The parade in these photos is a small affair with young people carrying a few signs and handing out flyers to pensioners sitting on benches. 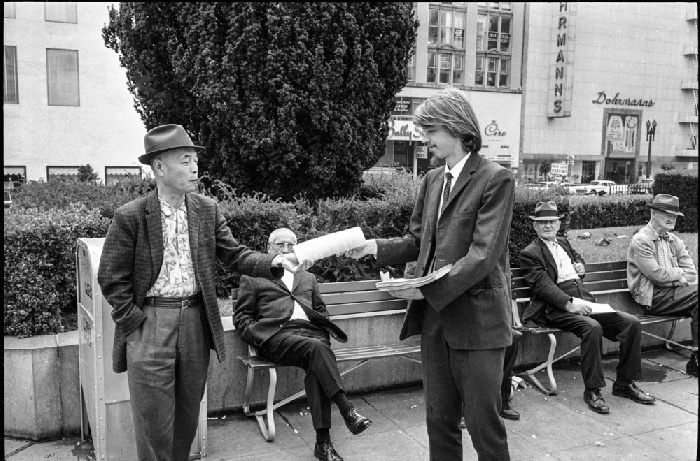 One of the leaders is a photogenic 22-year-old poet named Chet Helms, who would go on to fame as a music promoter and counter-culture organizer in the Haight Ashbury. Here Helms is before his owlish eyeglasses and big beard of the hippie days. He wears a rakish mustache and goatee over a skinny tie. A suit coat hangs loosely on his thin frame.

Photographer Fran Ortiz captures Helms politely handing out flyers and engaged in a public debate with the Rev. Mrs. Naomi Annette. The 68-year-old woman, bible in hand, hectored the marijuana advocates every Sunday, perhaps less irked by their cause than their treading on her turf as a Union Square “freelance evangelist.”2 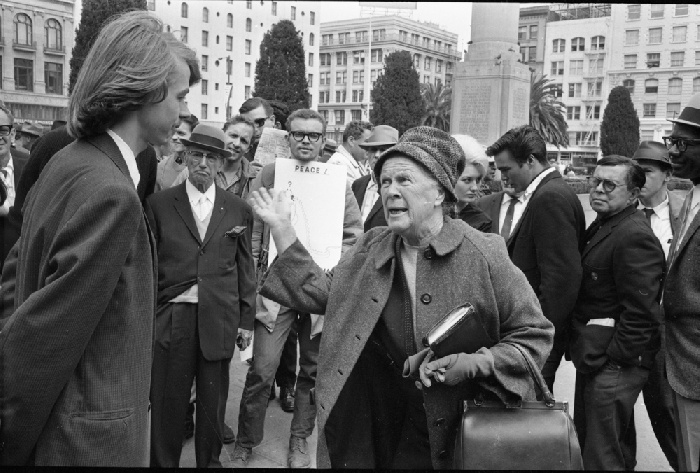 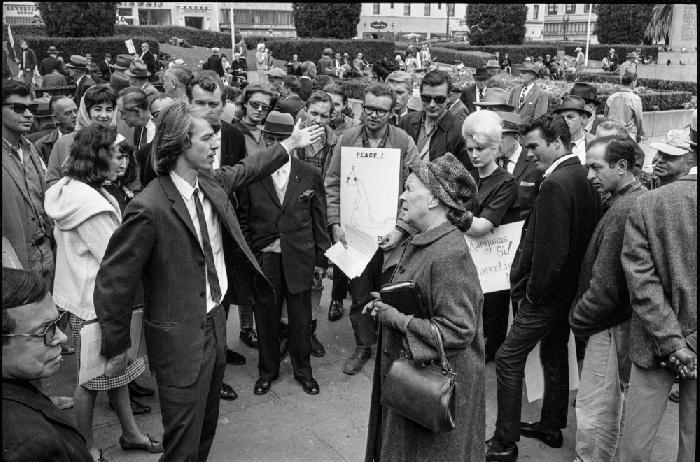 Annette’s frequent complaint that the nation was corrupt with sin switched to a pun about the country “going to pot.” She warned the group: “Your children will be outlaws and idiots.”