Seventy-five years ago this week, in the middle of World War II, residents of the Outer Mission and Crocker-Amazon neighborhoods heard the roar of a plane circling low overhead, then an explosion. 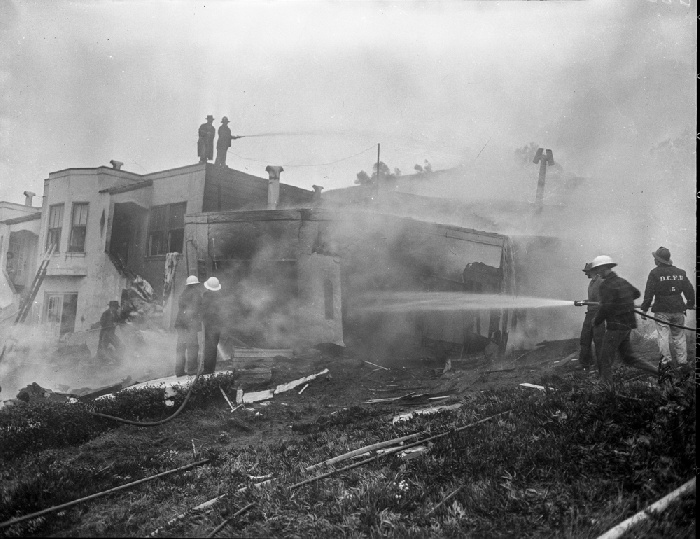 When we first found a series of ten news negatives in the OpenSFHistory collection, a cursory glance had us assuming the event was a common house fire. Then we came to this shot of a woman goggling at an aircraft engine in her yard. 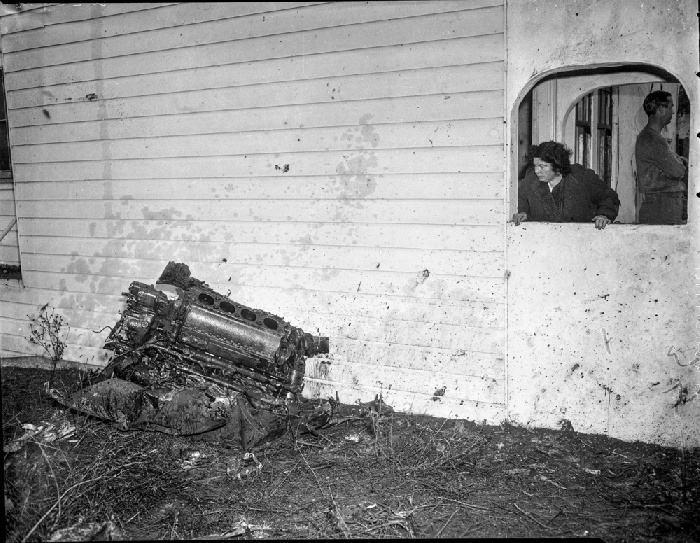 Mrs. Ralph Carboni at 52 Alexander Avenue looking at the plane engine beside her house on December 5, 1943. (wnp14.4092; courtesy of a private collector.)

On December 5, 1943, a U.S. Army fighter plane fell from the cloudy skies, tore through high-tension electrical wires, clipped the top of a house, and crashed into a suburban street just over the county line in Daly City. Explosive ammunition shells, fuel, and the aircraft engine flew in all directions along Alexander Avenue between Roosevelt and Templeton in the Crocker Terrace neighborhood. The body of the poor pilot landed with a thud on the roof of one house, while one of his severed hands ended up at the front step of another. Chunks of sidewalk and street concrete ripped through walls and “the entire street had become an inferno from high octane gasoline.”1

Another plane had crashed into nearby hills. The two fighters had departed San Francisco Municipal Airport together on a routine mission, flew in formation, and careened out of the sky within minutes of each other, both pilots killed. Early conjecture was a midair collision, but military officials quickly called the two accidents “purely coincidence.”2

On the street, one house, 73 Alexander Avenue, was totally destroyed by the exploding fighter and a fire ignited by airplane fuel. No one had been at home; the property had just sold to new owners who planned to move in that very day. (This close call must be a family story that has never been forgotten.) Two neighboring houses had been knocked half a foot of their foundations. A thirty-pound hunk of metal fell through the bedroom ceiling of Harold Udby at 48 Alexander Avenue—narrowly missing his canary—while the pilot’s body landed on his roof. “We heard three or four explosions. I look out and saw the street blazing with gasoline, which was running in a river down the hill. My car was standing by the curb, also ablaze. I could see the house had been moved on its foundations and that the whole side of it was aflame. So we grabbed the children and beat it.”3 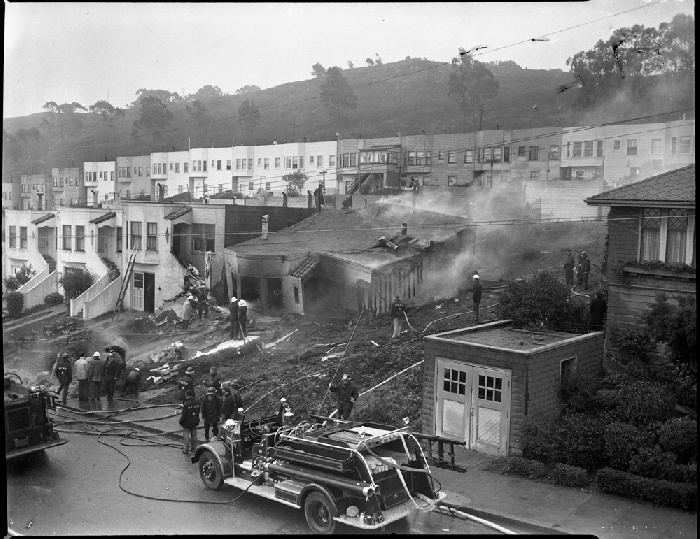 The shell of 73 Alexander Avenue collapsed and smoldering. December 5, 1943. View to the southeast with San Bruno Mountain in background. (wnp14.4088; courtesy of a private collector.)

Most of the residents of the street had been home on the Sunday morning and it was considered a miracle that, outside the pilot, no one had been injured or killed.

The U.S. Army Air Forces (USAAF), the predecessor service of today’s U.S. Air Force, brought on 193,000 new pilots during World War II, with another 124,000 candidates either failing to qualify or dying in training accidents. More than 54,000 accidents were suffered by the USAAF in the continental United States in those years, resulting in more than 15,000 fatalities, or the equivalent of a World War II infantry division. The same day the two planes came down in Daly City, a third fighter crashed in a vacant Santa Rosa lot, killing another pilot. These are the deaths in war that don’t get made into Hollywood movies, but count just the same.4

Fire and police from Daly City, assisted by San Francisco squads, contained the fire on Alexander Avenue while Navy patrolmen and Army military police scoured the area for unexploded ammunition. The Army opened a board of inquiry investigation into the accidents. Two days later, a general told the press that an inexperienced pilot attempting to avoid low clouds was the cause of the crash and that any Army fliers who flew lower than 1,000 feet in nonemergency situations would face court-martial. The war went on.5 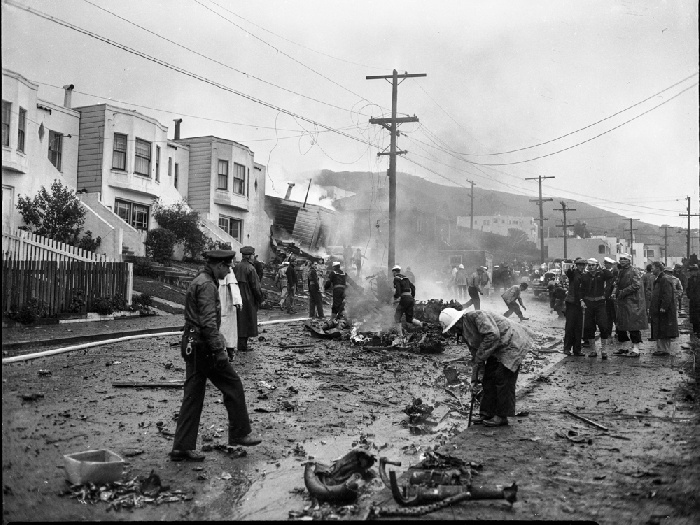