90 years ago this week, on August 25, 1929, San Francisco was greeted with a never before seen sight…the Graf Zeppelin floated above the city. The huge German dirigible arrived just a little after 6:00 p.m., having completed a trans-Pacific flight from Japan.

Named for Count Ferdinand von Zeppelin, a leading proponent of lighter-than-air technology and travel, the Graf Zeppelin was close to completing an around-the-world trip that had started at Lakehurst, New Jersey on August 7, 1929. Graf Zeppelin completed the Japan to San Francisco, 6000-mile leg in 68 hours, setting a record for the fastest crossing of the Pacific, beating the old record set by Army pilots in 1924 by several hours.

After leaving Lakehurst, New Jersey on August 7, 1929, under the command of Dr. Hugo Eckener, the Graf Zeppelin landed at its home base in Friedrichshafen, Germany on August 10, 1929. Four days later, it set out for Japan, arriving there on August 19, 1929. The dirigible suffered slight damage when it was being removed from its hanger in Tokyo, delaying its departure in order to make repairs. It finally left Tokyo on August 22, 1929, managed to elude a storm and get through heavy fog, before approaching the Golden Gate on August 25, 1929. 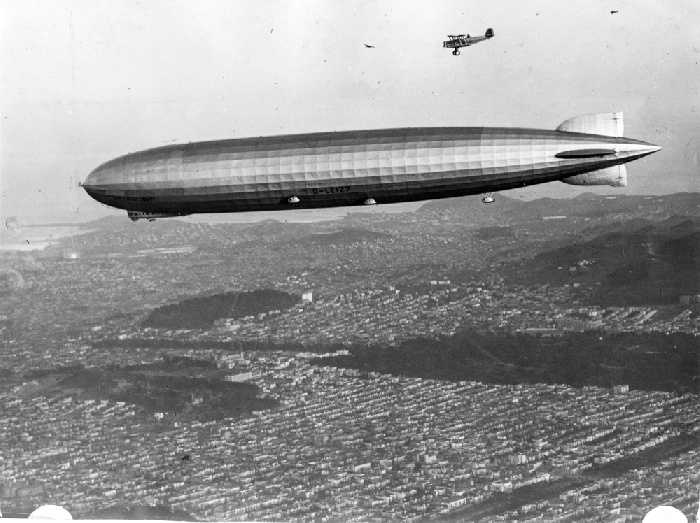 Graf Zeppelin above the Golden Gate with view of Richmond District, Golden Gate Park, and Lone Mountain below it, August 26, 1929. (wnp27.6626; Courtesy of a Private Collector.)

The keeper of the Point Reyes lighthouse, G.W. Jaehne, was the first to spot Graf Zeppelin with his binoculars at 5:49 p.m., marking the entry in the lighthouse log. Amazingly, it approached the West Coast within eight miles of where it intended to be. A few minutes later, watchers on the Farallon Islands caught sight of it. At 6:05 p.m., eager eyes atop some of the City’s tallest buildings also caught sight of the dirigible. Graf Zeppelin appeared to be heading south toward Los Angeles and there were some initial worries that it would bypass San Francisco. After passing the Farallons though, Dr. Eckener turned the ship to the west and it floated in through the Golden Gate, passing the Mile Rock Lighthouse at 6:25 p.m. Dr. Eckener had timed his arrival into San Francisco for maximum possible dramatic effect.1 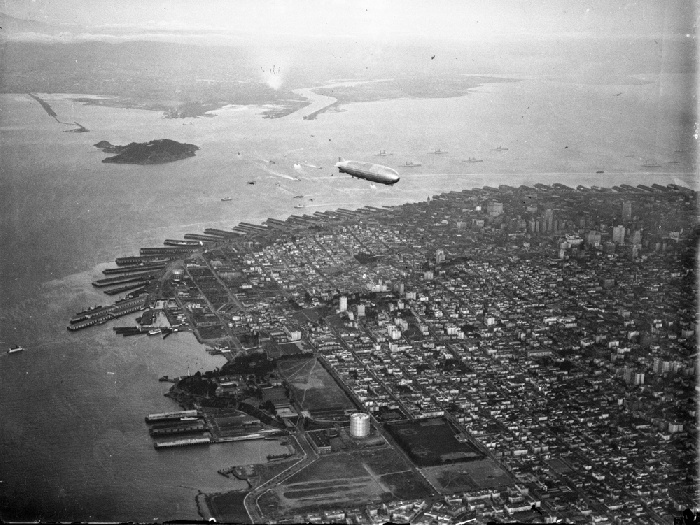 “San Francisco greets you, your officers, passengers and crew with profound respect and admiration, as you float over American soil after your stupendous transpacific voyage. You give us new visions of world unity and crown the record of achievement of our age of scientific wonders. We honor your name with those of Magellan, Fulton and Lindbergh, and offer you all our good wishes for your journey to Lakehurst and across the Atlantic to the triumphs that await your homecoming.”2 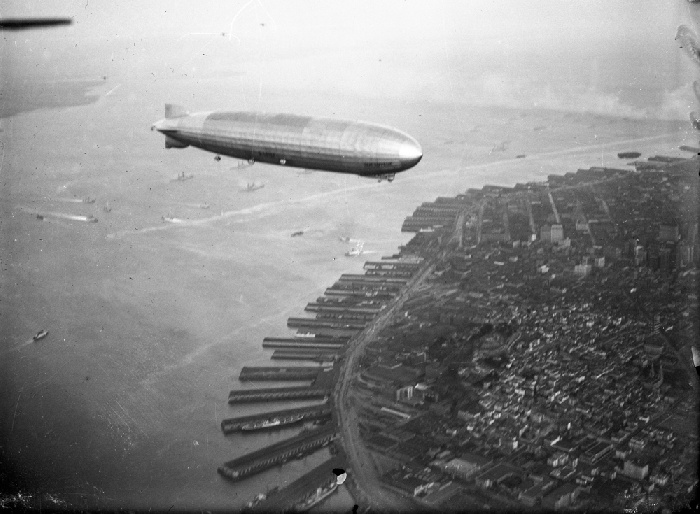 The Graf Zeppelin’s globe circumnavigation excursion had been bankrolled by William Randolph Hearst. So on its way to L.A., the airship did a flyby over the San Simeon home of Hearst, but found it dark with no lights on. As it drifted by though, a switch was flipped and Hearst Castle exploded with lights for the benefit of the crew. After radio greetings were exchanged, the Graf Zeppelin continued to Los Angeles, arriving early on August 26, 1929. It would arrive back at Lakehurst, New Jersey on August 29, 1929, completing its worldly voyage in 22 days.

Dirigible travel would continue to expand for the next eight years until the Hindenburg disaster at the same Lakehurst naval base where the Graf Zeppelin began and ended its trip. The Hindenburg explosion and fire destroyed public confidence in airships. Airplane travel would soon take over.