A closer look at an OpenSFHistory image recently posted.

When we scanned the image below of earthquake damage to Holy Cross Catholic Church in 1906 (another view is here), one of our content experts first typed the title as “St. Patrick’s,” before I noticed and corrected it. Our expert wasn’t too far wrong with the name. Just next door to the two-towered church, out of view in this shot, stands San Francisco’s first St. Patrick’s Catholic Church, two-and-a-half miles from where it was erected in 1852. Outside of Mission Dolores, this humble wood-frame building, designed in a simple Classical Revival style, may be the oldest standing religious structure in the city. 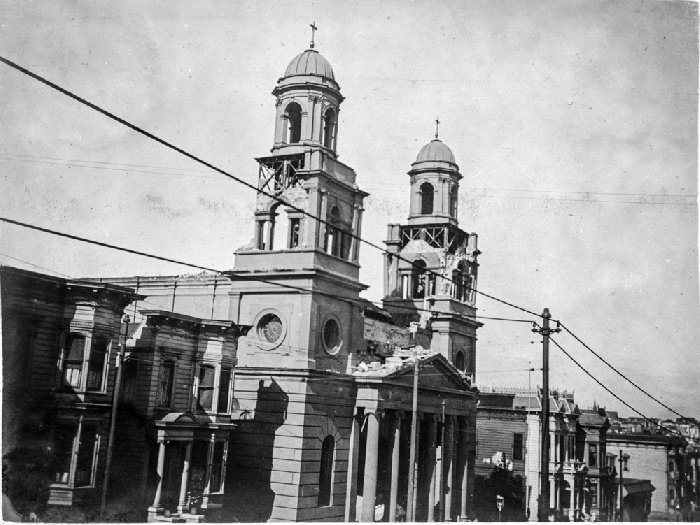 Below is an 1854 photograph by George Robinson Fardon. St. Patrick’s Church, on the right, stands in its original location on Market Street between 2nd and 3rd Street, then known as “Happy Valley.” (The handsome brick structure on the left is the Roman Catholic Orphan Asylum.) In 1872, a new large brick St. Patrick’s was dedicated on Mission Street, between 3rd and 4th Street, where, rebuilt after the 1906 earthquake, it stands today. To make room for the construction of the Palace Hotel, the original St. Patrick’s building was moved to the nascent Western Addition on Eddy Street between Octavia and Laguna Streets, where it became St. John the Baptist church. When a massive new St. Mary’s Cathedral opened on Van Ness Avenue in 1891, St. John’s congregation was folded in, and the little church building was conscripted once more to serve a young parish.

The Church of the Holy Cross formed in the 1880s, with mass held in the chapel at the entrance of the Calvary Catholic Cemetery on Lone Mountain near Divisadero Street. With the parish growing, Holy Cross’ pastor, Rev. John McGinty, had St. John the Baptist Church moved seven blocks to Eddy Street near Scott Street, where it was re-dedicated as the new Holy Cross Church on May 24, 1891.

No one was under the impression that after being outgrown by two parishes the small hall would be Holy Cross for long. The San Francisco Chronicle noted at the time that the forty-year-old building would “probably only be used as a church for the parishioners of Holy Cross parish for a short time, as it is Father McGinty’s intention to build a fine edifice in the near future.”

After a few years of fundraising, Father McGinty did have his fine edifice. The cornerstone-laying ceremony—complete with grand neighborhood parade—was held on April 3, 1898, and the new Holy Cross church was dedicated on August 13, 1899. The 1852 church building became the parish social hall. 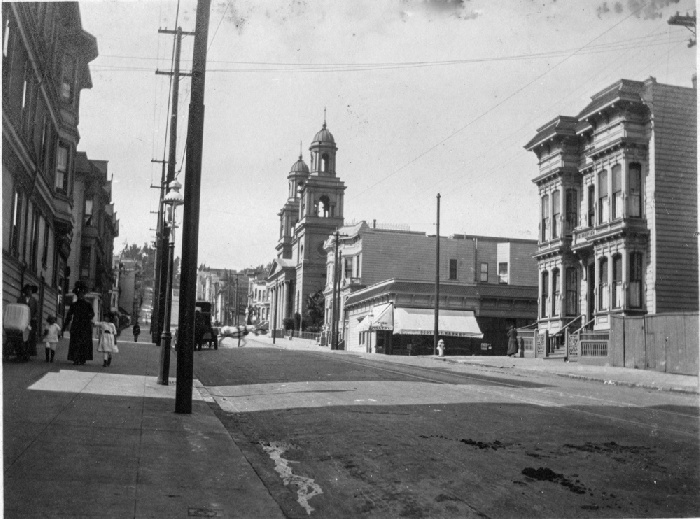 Eddy Street near Scott Street. Beyond the Scott Street Market rises the new Holy Cross Church with towers and classical portico, circa 1900. (wnp27.0258, courtesy of a private collector).

Despite the damage in the 1906 photo, Holy Cross was rebuilt after the earthquake and served Western Addition Catholics—including a few of my relatives—for close to ninety years. But the estimated $3 million cost of seismic retrofitting after the 1989 earthquake persuaded the archdiocese to put it up for sale in the late 1990s. Developers consolidated part of the church building into a condominium complex. The rest of the 1899 church, and the old St. Patrick’s, are now occupied by a Buddhist temple, the Macgong Monastery.