The 1915 Panama Pacific International Exposition (PPIE) was a typical worlds fair of its time. Commercial, political, and industrial powers filled palaces for horticulture, machinery, and “food products.” Establishment art, architecture, and culture were spotlighted, and the public got an over-the-top recreational experience of amusements, parades, and electric light displays. (View our OpenSFHistory photo gallery.)

Held in San Francisco, the PPIE was meant to celebrate the opening of the Panama Canal, but was as much a celebration of San Francisco’s recovery from the 1906 earthquake and fire. Some 18 million people visited it over the course of 1915, with 459,022 coming just on closing night.

Two years after the fair, as this Department of Public Works photograph taken on April 15, 1917 shows, the revelry and wonderment of the PPIE had given way to a muddy hangover. 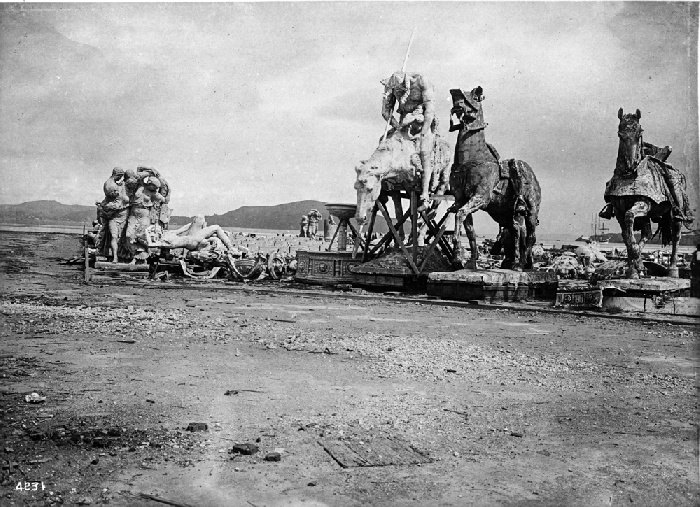 James Earle Fraser’s iconic “End of the Trail” statue—a slumped, oblivion-facing American Indian and horse—stands on the bay fill amid a field of classical detritus. The rider keeps company with more stalwart chargers and a divinity awkwardly reclined with dancing acolytes. Fraser’s sculpture would be moved to a park in Visalia, California, and eventually to a cowboy museum in Oklahoma.

Another view from the same day shows, on the left, the city jewel that is the Palace of Fine Arts, which was saved and restored—and has had to be saved and restored a couple of more times in the intervening century. On the right is the fair’s California Building, doomed to destruction after plans to make it a state teachers college fell through. In between the two is the base of the Column of Progress. Once situated among the broad boulevards and fantastical architecture of the PPIE, it survived at the foot of Scott Street while the plans began for the winding streets and Mediterranean flats of the Marina District. Progress accomplished, the city demolished the column as a traffic hazard in 1924. 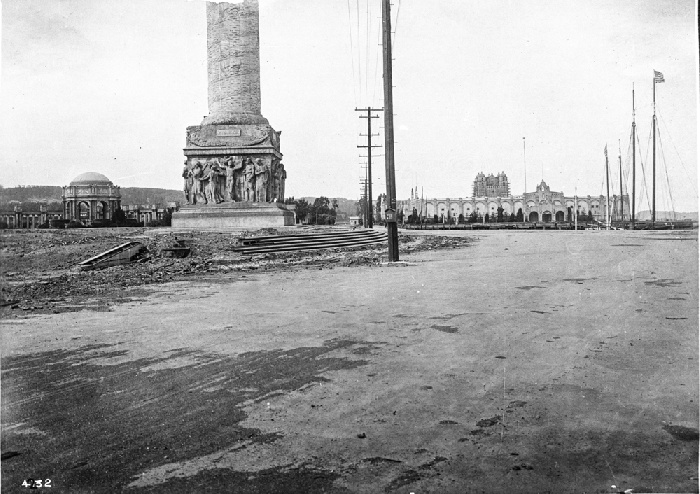 Two years ago, the City of San Francisco celebrated the centennial of the fair. A “1915” light was displayed on the Ferry Building. Commemorative talks, books, and publications were issued. Local historians, elected officials, and business dignitaries wined, dined, and danced at a glittery soiree inside the Palace of Fine Arts.

We love anniversaries with a round number, and attention has moved on this year to celebrate the 50th anniversary of the Summer of Love. Silk gowns and peacock feather tiaras have given way to tie-dye and love beads. San Francisco Travel, the city museums, and brands from Levis to a British marmite manufacturer are all getting into the spirit of hippies, rock photography, and psychedelic fashion.

There’s another round number anniversary this year, not talked about as much. The week before the mudflat Marina photos were taken, Congress declared war on Germany, voting to put the United States into the heart of World War I. No doubt the 100th anniversary of our country’s march into mustard gas attacks, muddy trenches, and the war-that-didn’t-end-all-wars is a harder sell than a Summer of Love. 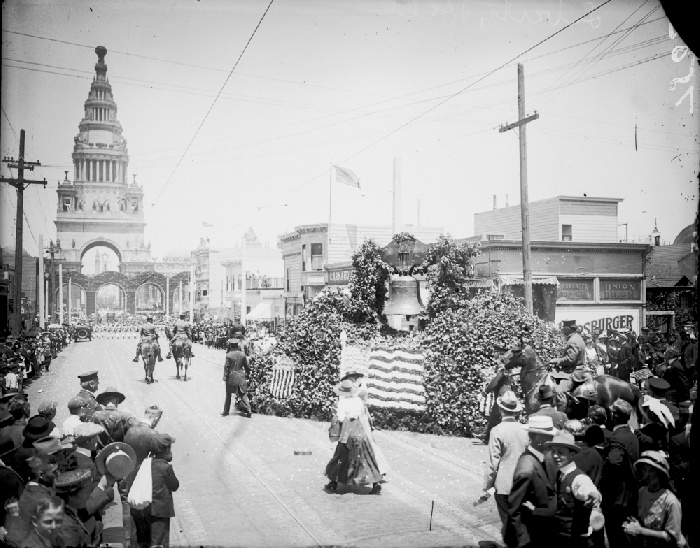