One hundred and eleven years ago, in the early morning of April 18, San Francisco shook and trembled through a massive earthquake. Stone buildings shed their skins. Chimneys and brick walls collapsed on streets and adjoining buildings. Roadways split and sunk. People were gravely injured or killed by crumbling boarding houses, apartments, and warehouses. (See our 1906 earthquake-related OpenSFHistory images as a gallery and marked on a map.)

The disaster became much worse as fires broke out from the Embarcadero to Hayes Valley and, aided by wind and inept attempts to create fire breaks with explosives, joined into larger maelstroms that gobbled up almost 500 city blocks of cottages, factories, tenements, hotels, stores, banks, and government buildings over the next three days. 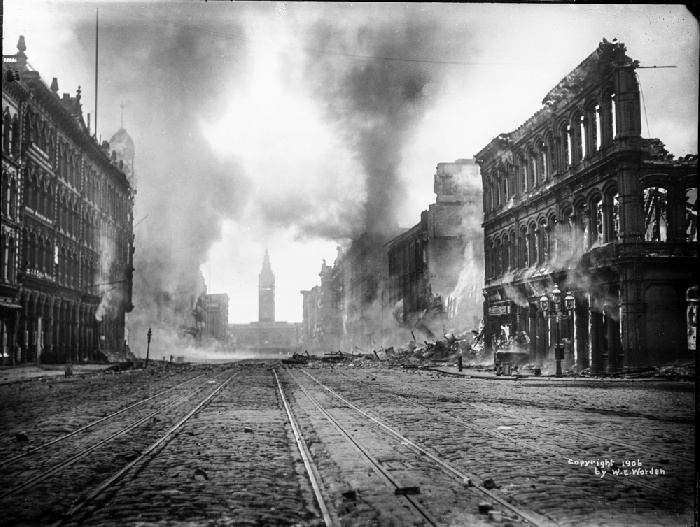 San Francisco speedily rose again and again from fire in its early boomtown days, as the Argonaut William Shaw described in his 1851 book, Golden Dreams and Waking Realities: “…ere the ground had cooled, the charred mass of cinders had disappeared, contracts were made, and hundreds employed in laying the foundations of new edifices.” The phoenix reborn from ashes is a central element of the city’s seal, and San Franciscans pride themselves on their resilience. In the OpenSFHistory collection are numerous views of humble encampments and street kitchens named with good humor after the 1906 earthquake: “Camp Cheerful,” “House of Mirth,” and “Hotel St. Francis.” 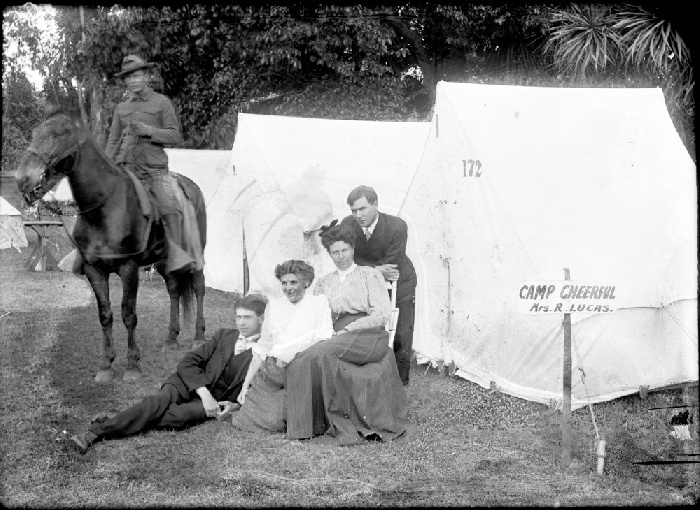 We admire and remember fondly the optimism and fortitude of our ancestors, who had so much pride in being San Franciscans that they preferred to stay and rebuild a city of rubble and ashes instead of starting life over in Oakland, Portland, or Los Angeles. Yearly commemorations are held at Lotta’s Fountain on Market and Kearny Streets at 5:12 in the morning, and at 20th and Church Streets, where participants paint the “golden hydrant” that produced water to save the Mission District and Noe Valley from the flames. These gatherings celebrate the city’s enthusiasm to endure.

But in the face of this boastful narrative it’s important to remember that the 1906 earthquake and fire was a real disaster that killed thousands and left many more homeless. The view below, of a crowd gathered in Hamilton Square in the immediate aftermath of the earthquake surrounded by the few belongings they could drag with them, shows the shock, bewilderment, and worry in people’s faces. 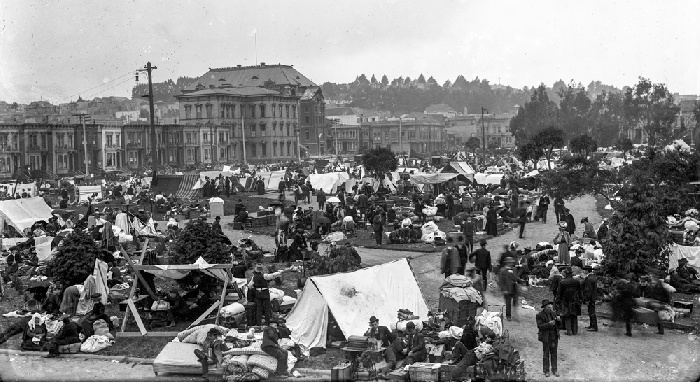 Why is it important to remember disaster and deprivation alongside the can-do spirit of rebirth? Because what happened in 1906 will happen again. A massive earthquake is coming, as early as this afternoon. Attendant woes of destructive fires, landslides, inundation, and disease from broken sanitation systems are all possible, even likely. We must be prepared to not only rebuild the city of San Francisco, but to aid the destitute, the injured, and the homeless. The phoenix rises from the ashes not only as new buildings, streets, and businesses, but also as new life for the poor, helpless, and the not to be forgotten.