“Mayor Rossi will never make good as a welder. There were three links to be burned. William P. Filmer had a gold one. Frank P. Doyle, a copper one and Mayor Rossi’s was silver. He came in a poor third.” – San Francisco Chronicle, May 29, 1937. 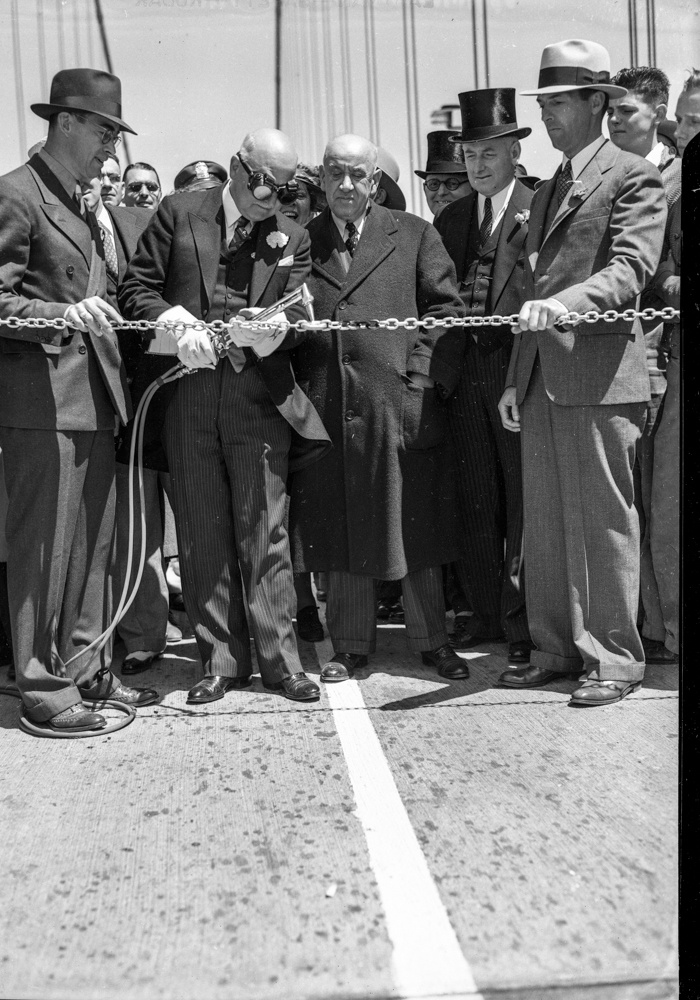 Mayor Angelo Rossi cutting a silver chain with acetylene welding torch. Timothy Reardon (President, Board of Public Works) wearing an overcoat, stands at the Mayor’s left, and George C. Miller, Vancouver mayor, is in the top hat. – (Courtesy of a private collector.)

This week marks the eightieth anniversary of the opening of the Golden Gate Bridge. As with every round number anniversary for the span, stories shall be published on the engineering, the design, the perseverance of its creators, and the role the world famous icon plays in popular culture. But in reviewing the many images in our OpenSFHistory collection of the opening week celebrations in 1937, the best story has to be Angelo Rossi, San Francisco’s 31st mayor, using an acetylene torch to cut a chain for the traditional “ribbon cutting.”

In some ways, the two men described by the Chronicle reporter as handier with a blowtorch had stronger connections to the famous span than Mayor Rossi. William P. Filmer served as president of the Golden Gate Bridge and Highway District, the special-purpose governing agency in charge of bridge operations as well as running Golden Gate Transit and Golden Gate Ferry. Frank Pierce Doyle, a Santa Rosa banker, was described as the father of the Golden Gate Bridge for his tireless work rounding up support and funding for its construction. The San Francisco approach to the bridge from the Marina District—recently rebuilt as the Presidio Parkway—was named Doyle Drive in his honor, and his car, driven by a bridge worker on an inspection a few weeks before the official opening of the bridge, was the first private automobile to cross the span.

Being first to cross the bridge was an honor shared by many during the week’s festivities. Harland Swanson, a 16-year-old living at 2116 18th Avenue, “ran under three women and a dog and was first through the turnstile.” Del Jones from 1307 12th Avenue drove the first motorcycle with his friend Ted Cossman being the first motorcycle passenger. The first twins crossed, the first man on stilts, and the Chronicle even noted the first misplaced child: Betty Tandy, nine years old, of 1221 29th Avenue. 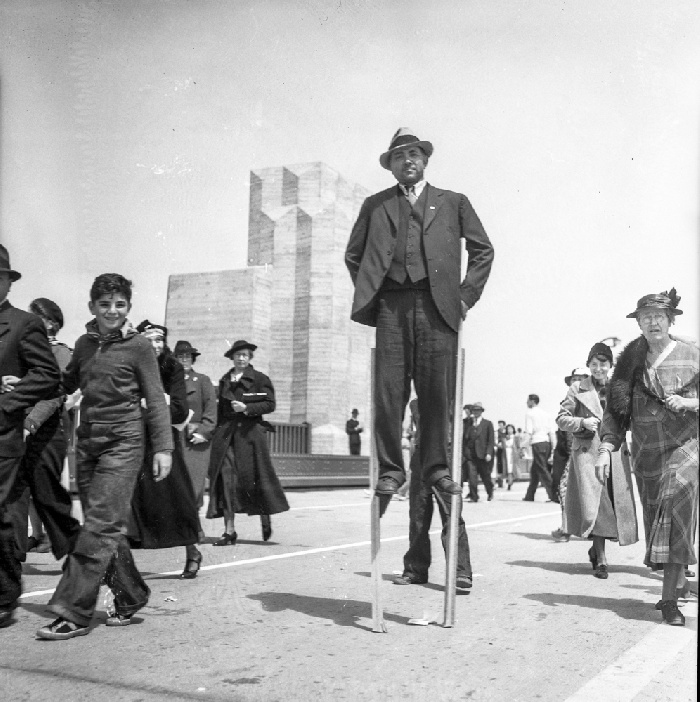 Florentine Calegeri, a houseman from the Palace Hotel, has the distinction of being the first to walk across the Golden Gate Bridge and back on stilts on May 27, 1937. (Courtesy of a private collector.).

The man in the top hat on Mayor Rossi’s left was George C. Miller, His Worship the Mayor of Vancouver, British Columbia (that’s really how they say it up there). He and his Canadian contingent were brave to wear high-topped headwear. Winds were howling at 25 mph during the ceremony. A wise-cracking reporter noted “someone could have done a thriving business reclaiming Mi-lady’s hairpins from the bridge deck,” and that “one hat blew over the railing and the sharks got that for a souvenir.”

The chain-severing ceremony took place at the north tower and the dignitaries proceeded to drive towards San Francisco. At the toll plaza they faced a barrier perhaps more daunting than chains of gold, silver, and bronze. “Queen Empress” Vivian Sorenson and her court of nineteen beauty queens, all in fiesta outfits, met them in a human chain of mantillas and ruffled skirts. FasTrak® accounts were not accepted.