In processing and scanning images for the OpenSFHistory project, there are views we easily identify (so many shots of Fisherman’s Wharf and the Golden Gate Bridge…). Others have become familiar, such as early city hotels, the first Palace, the Occidental, and the Baldwin. Then there are outliers that stump us from the start and need some detective work. This image of “Native Sons Memorial Grove” is a good example: 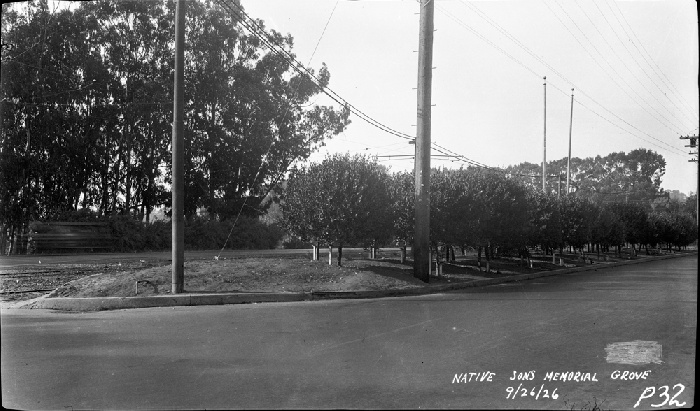 The view is obviously a city street and not a park. There are telephone poles, a traffic median, and streetcar tracks visible on the far left. The grove has two tall flagpoles. Our first guess, with the open spaces, lack of buildings, and trees in the background, was Sloat Boulevard, perhaps Junipero Serra Boulevard. Luckily, the date scratched on the negative, September 26, 1926, gave us a jumping off point for newspaper archive research.

On June 6, 1926, the San Francisco Chronicle had a story about a troop of 300 boy scouts participating in memorial services held by the Native Sons and Daughters of the Golden West at “the Grove of Memory, Ocean Avenue and Junipero Serra boulevard.” The Native Sons and Native Daughters are social organizations formed in 1875 and 1886 with a focus on California heritage. The 1926 ceremony honored 39 members of the Native Sons who had died in service during World War I. Each acacia tree in the grove had a nameplate at its base. A local band played taps while the scouts set small flags beside the name of each serviceman. The participants held another memorial service the following June.

There’s no sign of this grove on Junipero Serra Bouelvard between St. Francis Circle and Ocean Avenue today. The road has been renovated for increased car traffic and the median is now all streetcar tracks. What happened?

In 1927, The Park Commission designated land between 15th and 17th Avenues on the north side of today’s John F. Kennedy Drive in Golden Gate Park for a new Grove of Memory. The Native Sons and Native Daughters hosted a series of whist parties to raise funds for an appropriate monument at the grove, and in November 1927, the new grove site was dedicated. In addition to a grove of redwood trees, a seven-foot-high boulder was placed and reserved for a plaque of names on the rock face and commemorative statue on top of it.

For the statue, artist M. Earl Cummings shunned the typical war memorial pose. Instead of a heroic man in action, Cummings created a young doughboy holding not a weapon, but a wreath. Both the statue and plaque were dedicated in 1930, and on June 3, 1951, a new plaque, listing additional honored dead from World War II, replaced the original.

Today, the Grove of Memory consists of dozens of mature redwood trees. Thousand of drivers on Crossover Drive curve around it on their daily commute. This year is the centennial of the United States entry into World War I. For Memorial Day, the doughboy should have some flowers placed at his feet. 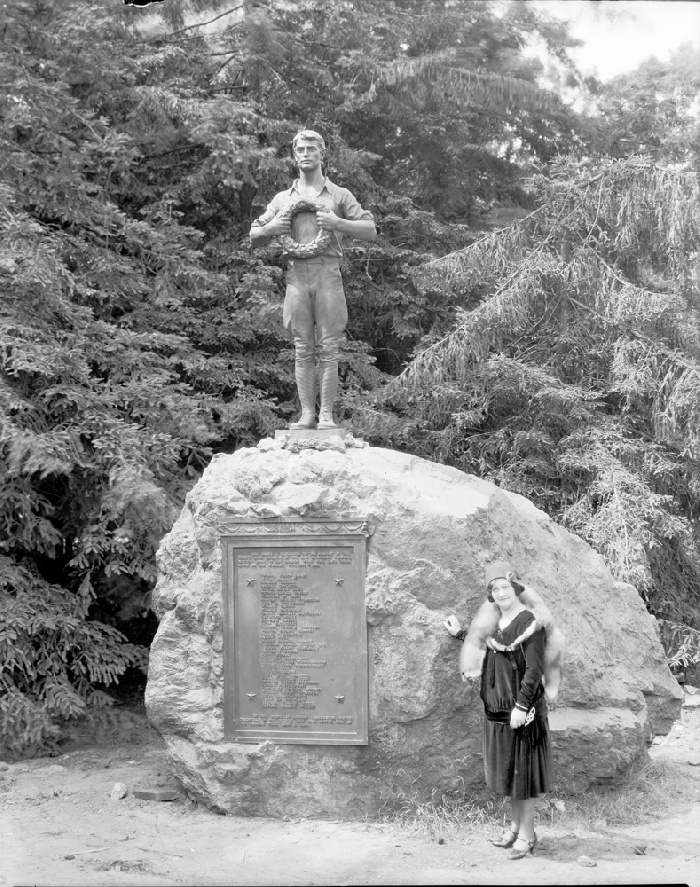 M. Earl Cummings’ doughboy statue and memorial plaque in front of the Grove of Memory in Golden Gate Park, May 27, 1930. (Courtesy of a private collector.).