This week, San Francisco Chronicle architecture critic John King did a nice piece on a Folsom Street building that has been an archaic sight: a century-old working blacksmith shop an anvil’s toss from downtown.

While now new slick towers rise around it, thirty years ago the rustic shiplap-sided building was surrounded by empty lots, quiet warehouses, and a stark PG&E substation. In the early 1990s I took lunch walks on the mostly deserted streets of Rincon Hill, and actually heard an occasional rooster crow behind a weed-rimmed fence underneath the Bay Bridge anchorage. I’d pass Klockars’ and, blacksmith signage or not, I assumed the place it was probably rented by some well-off gearhead to store his cars rather than actually housing a true smithy. 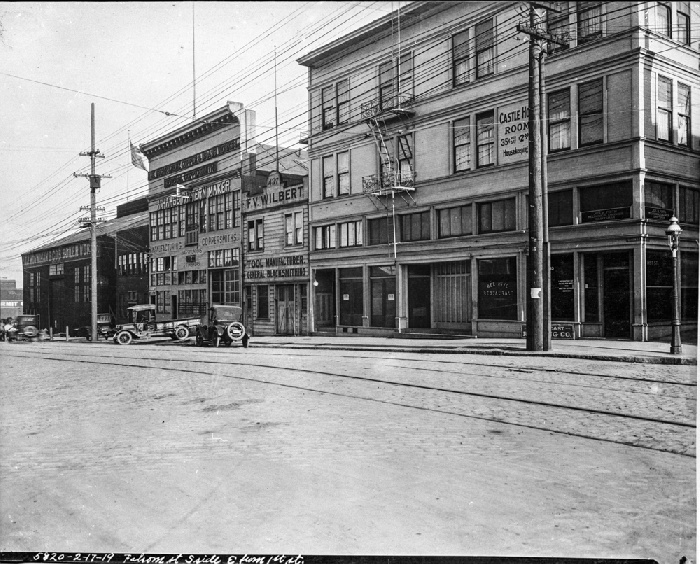 In the photograph above, a scan of a Department of Public Works department image, 443 Folsom Street was only seven years old, a relative newcomer to Rincon Hill. Blacksmith F. V. Wilbert shared the block with a coppersmith, a boilermaker, and the Castle Hotel, where rooms were 35 cents a day. Other photographs taken from the department in 1919 show a neighborhood solidly working class, full of smelters, dark corner bars with swinging doors, ramshackle cottages, and residence hotels for sailors. 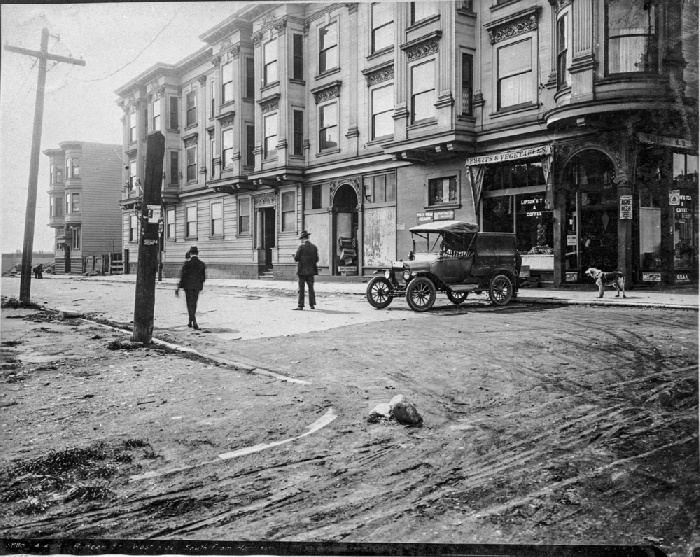 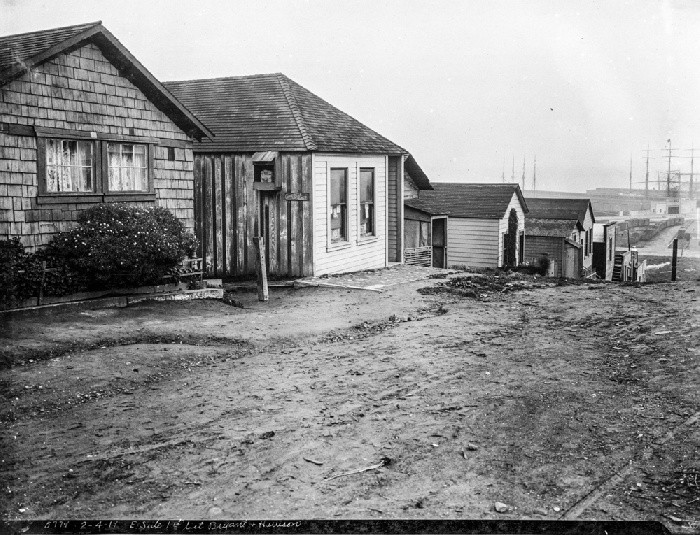 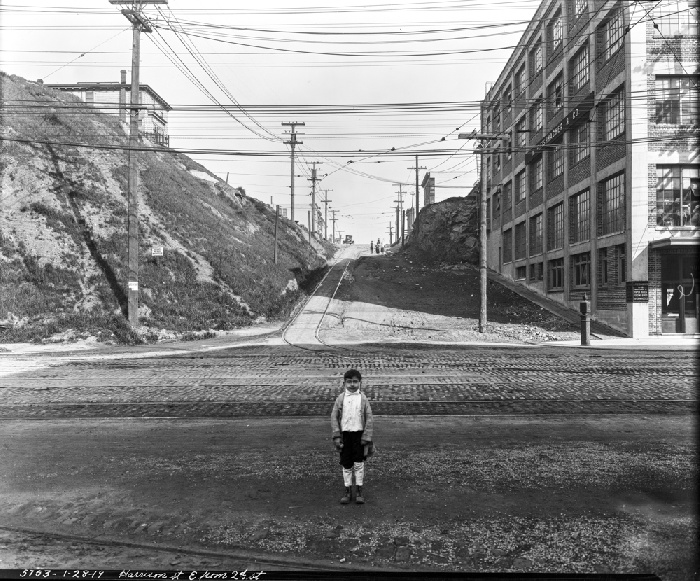 Harrison Street East from 2nd Street. The boy posing has influenza mask around his neck. Fleishhacker Box Company at right, and the hill in background has since been cut down. (wnp26.088, DPW Image 5753 by Horace Chaffee. Copy negative courtesy of a private collector)

While these eerily empty industrial streets from the 1910s are hard to match up with the building boom of today, they were as markedly different fifty years earlier. In the 1860s and 1870, Rincon Hill was the neighborhood of genteel Victorians, where the fashionable, politically-connected, and wealthy lived on the sunny hillside. 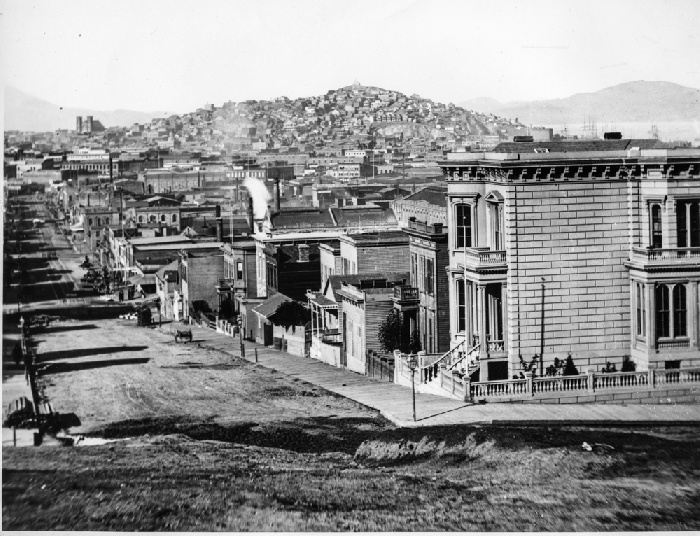 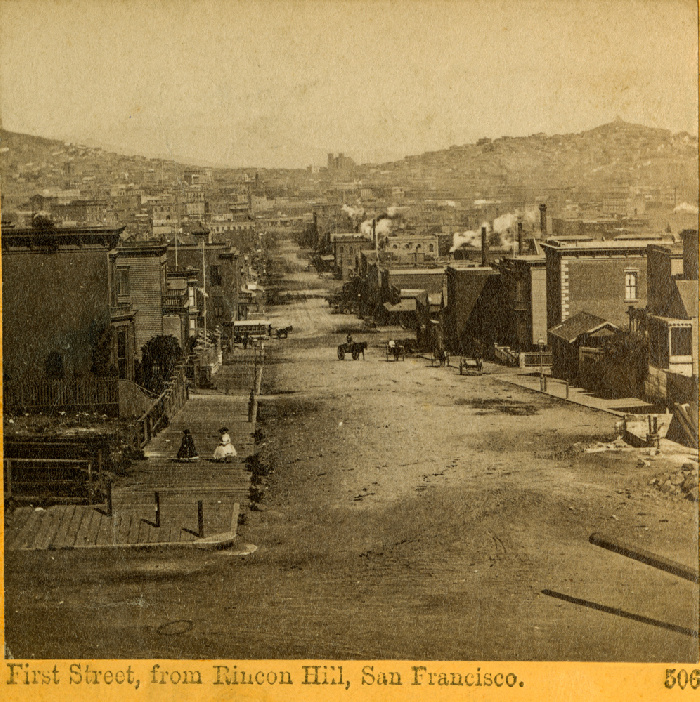 2nd and Folsom Street in the 1860s, looking north to Telegraph Hill. (wnp24.215a, stereoview image by Carleton Watkins. Courtesy of a private collector)

The nabobs relocated to Nob Hill and Peninsula suburbs in the 1880s, their retreat hastened by the infamous 2nd Street cut through the hill, which connected the city’s South of Market neighborhood with shipyards, docks, and industrial concerns to the south. Soon, the area became a blue-collar light-industry zone, with rail lines connecting to warehouses across dirt paths and cobblestone streets surrounded by smokestacks.

When the Bay Bridge was constructed in the 1930s, even more of the hill was obliterated to the point that today some real detective work was necessary to see any hillside among the on-ramps.

Forty- and fifty-story residential towers are now looming or being constructed on all sides of the old Klockars building at 443 Folsom Street.

The last blacksmith’s grandson wants to turn the landmark building into a cannabis dispensary.

Browse the Rincon Hill neighborhood images in the OpenSFHistory collection.