There is joy and delight in this image from 1968. A motley band marches down the steps of Buena Vista Park. On the Haight Street sidewalk, a smiling mother and her child watches them. Another little girl leaning on the telephone pole across the street waits expectantly. 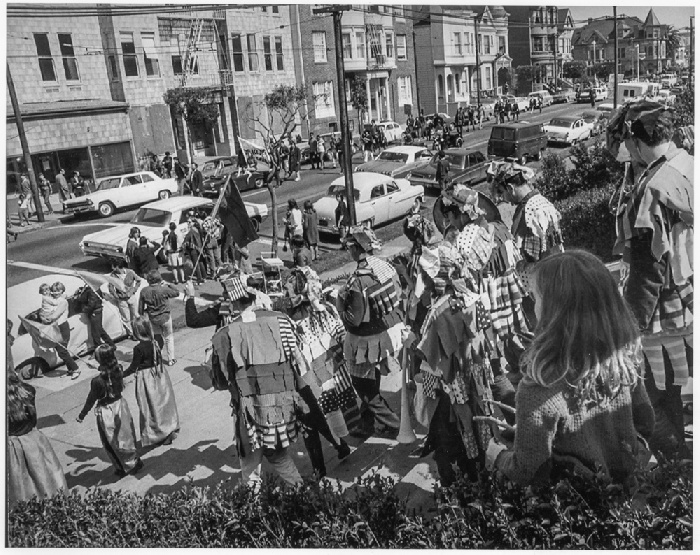 The parade on Haight Street that the Mime Troupe’s Gorilla Band is about to join is part of the “Freedom Festival Week” put on by the Peace and Freedom Movement in March 1968. The San Francisco Chronicle said the point of the festival was to “make the square community aware it has neglected basic arts and has become more warlike than the flower children.”

The Gorilla Band that day had 27 members, including three flag-bearing majorettes, a chorus, a brass section, and, the Chronicle noted, “a man who hummed through a comb.”

When this photograph was taken, the Mime Troupe had been performing political theater in Bay Area parks for close to a decade. Fifty-eight years and a Tony award later, the group still tries. (Can we agree that the political world—presidential tweet by presidential tweet—has almost been put beyond the reach of satire?) The Troupe’s rag-tag Gorilla Band drummed and fifed its way through protests, sit-ins, strikes, and socialist rallies for years.

At Peace and Freedom Party conventions the Gorilla Band would enter with “When the Saints Come Marching In” and open proceedings of meetings with seriocomic renditions of “Yankee Doodle,” “Battle Hymn of the Republic” or the Star Spangled Banner (after the “rockets red glare, bombs bursting in air” lyric they would moan, cry, and bewail.)

Under its inviting commedia dell’arte format, the Mime Troupe’s message was societal change and provocation, even if the audience was 99% in agreement from the start. As the Troupe’s Sandy Archer described it in 1970, “the content antagonizes.”

But Mime Troupe messages from a half century ago don’t sound radical today, at least in the Bay Area: women’s liberation, peace instead of war, individuals over corporations, income and health equity, ending police misconduct, protecting the environment. But, radical or not, all these issues are still with us, still unresolved, and still fought over at the highest level of government and social discourse.

But as the calendar inexorably moves on, we will soon be fifty years from the “death of the hippie” parade, the commercialization of a no-cash giving spirit, the arrival in the Haight of hard drugs and hardened characters, and a long bleak struggle protesting the Vietnam War. Type “United States” and “1968” in your browser if you don’t believe me that San Francisco Travel won’t be highlighting any fifty-year anniversaries next year.

But, as the clouds gather, let the record at least show that on March 9, 1968, the Mime Troupe’s earnest, radical, Marxist, clown-ragged Gorilla Band made a mom smile.