This Saturday, 167 years ago, California was admitted as the thirty-first state of the United States of America. While September 9 is observed as a day off for some state employees, and you might find an office here or there closed, most everything, including the DMV, is open for business. And what one certainly won’t see on the streets of San Francisco this weekend is a parade such as the one shown below in 1910. 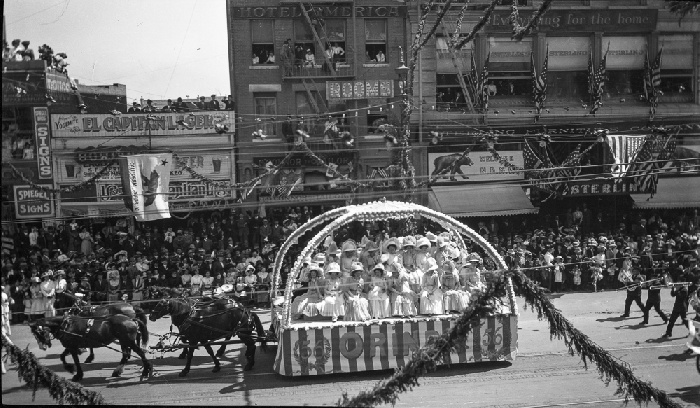 What happened to Admission Day? There are many who remember recognition of the day in school and the inculcation of state pride with the singing of the official state song, “I Love You, California.” (The lyrics are very “This Land is Your Land,” focused on grain, mountains, and rocky shores. It also rhyme “dear to me” with Yosemite.)

Labor Day’s rising as a popular national holiday during the same week certainly cut into Admission Day enthusiasm. State pride went down as disillusionment with government went up in the 1960s and 1970s (Vietnam War, Watergate, etc.). Plus, Admission Day could come off a little hokey, as illustrated by the photo below of Governor James Rolph cutting a giant cake while the Queen of Admission Day awaits with plate. 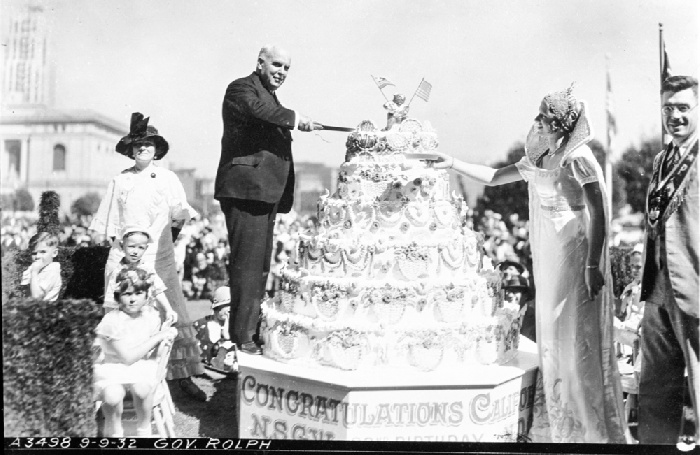 San Francisco’s most enduring offering to state pride is the Admission Day monument at the intersection of Market and Montgomery Streets. A young miner waves a United States flag exuberantly, with a pick on shoulder, gun in holster, boots on feet. On the column above him a winged woman holds outstretched a tome with the date of admission. In 1897, the monument was installed where Turk and Mason Streets intersect Market, then was moved in 1948 to Golden Gate Park, and in 1977, the peregrinating edifice was hauled back downtown to its present home. 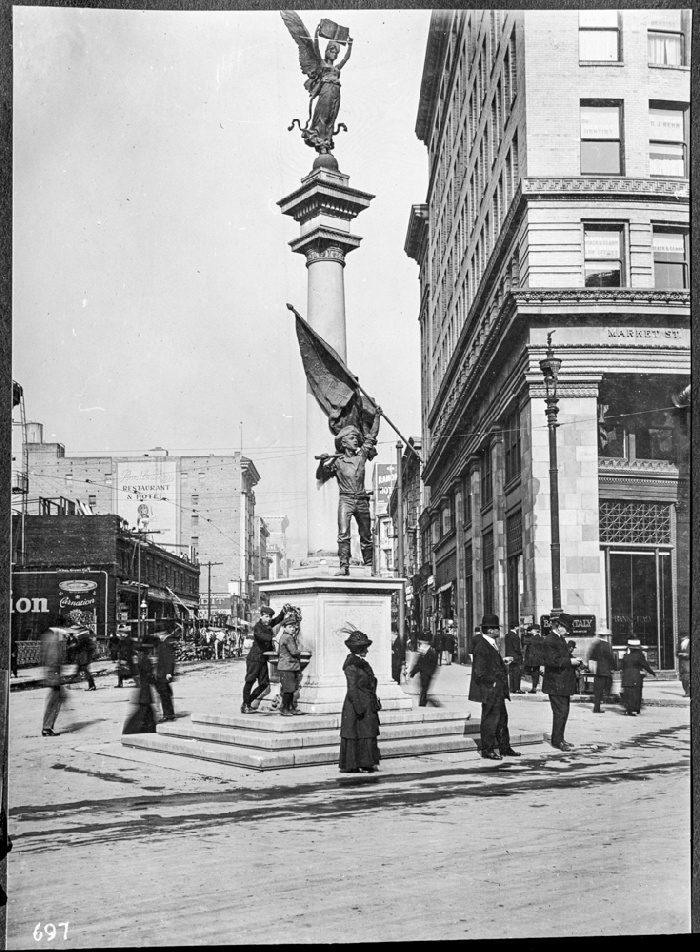 Another name for the Douglas Tilden-Willis Polk creation is the Native Sons Monument, as it was dedicated to the Native Sons of the Golden West fraternal organization. Mayor James D. Phelan commissioned the work out of his own pocket.

The racist opinions of Phelan and many of the Native Sons at the time may also have eventually played a part of the decline of Admission Day. The Native Sons and Daughters of the Golden West (both organizations still exist today) were prime organizers of parades and events for Admission Day. Their leadership a hundred years ago mirrored the opinions of James Phelan: California was for white men and women. People of Japanese ancestry were particularly vilified.1 Like Columbus Day, whether plainly stated or not, Admission Day celebrations could be seen as honoring the conquest of European races over Native Americans and Mexicans.

Racist and nativist groups are back in the headlines once more. While California stands politically at odds with the current presidential administration, divisions in the state are acute enough that proposals keep cropping up to split us into two, three or even five separate states. So there’s little likelihood that a unified pride in being Californian and part of the United States of America will bring back Admission Day popularity.

But I’m proud of being a Californian and wish the anniversary could be reclaimed and reimagined. While September 9 marks the admission of California to the United States, it can also honor the idea of the California Dream. The state known for anti-immigrant movements over its history is also famous as a destination for new ideas and fresh starts. Admission Day could repudiate xenophobia and racism and offer to the seekers, the refugees, the tempest-tossed from around the country, and around the world, a message of welcome admission.

1. In dedicating the Native Sons building in 1911, Phelan gave one of his typical anti-Asiatic speeches: “It is a crime against free government and Caucasian civilization to allow unrestricted immigration.” (“Phelan Pleads for Exclusion,” San Francisco Call, February 23, 1911, page 2.) Founders of the Native Sons of the Golden West organized Anti-Chinese clubs and the San Francisco parlor had Anti-Japanese committees through the first half of the twentieth century. (“A Danger to California,” San Francisco Chronicle, March 13, 1905, page 9, and “Petitions for Anti-Japanese Laws Planned,” San Francisco Chronicle, April 11, 1920, page 66, for just two of many examples.)