On a rainy September 16, 1927, Charles Augustus Lindbergh flew in to San Francisco. By the time hundreds of thousands of people met him on Market Street, the sun had begun to shine and one reporter opined, “Apollo must have felt bound to add his homage to this fellow rider of the skies.” 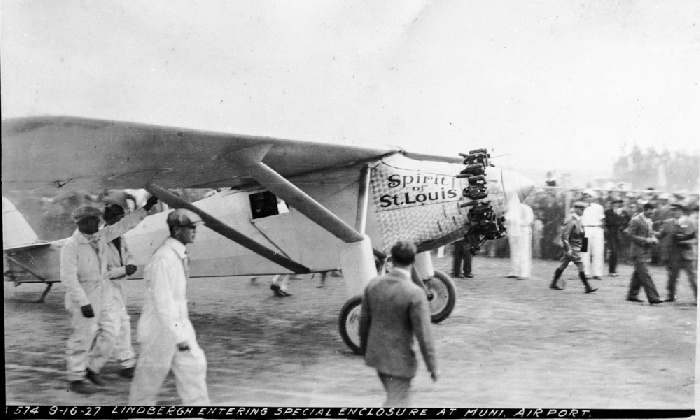 Lindbergh and the Spirit of St. Louis entering special hangar at the municipal airport at Mills Field, September 16, 1927. (wnp36.03528, Department of Public Works photo by Horace Chaffee, negative courtesy of a private collector.)

It’s difficult to conjure a modern day example that compares with the acclamation Lindbergh received for being the first person to fly solo across the Atlantic Ocean in May 1927. Today, in the United States, such hero worship with motorcade parades and thousands cheering themselves hoarse are reserved for championship football or baseball teams. Even then, an entire squad of victorious athletes shares the accolades over a series of vehicles, and in only one city for one day. Lindbergh’s life from May 1927 to April 1928 was a series of mad parades from New York City to Mexico City. He made 82 stops in 48 states flying the Spirit of St. Louis around North America and had the hero’s welcome wherever he went.

Banqueted, feted, pelted with ticker tape, deluged by fan letters, mobbed by hoards in hotel lobbies, Lindbergh also had to make speeches, wear tuxedos nightly, and deal with hundreds of reporters asking him about his love life.

It was the same in San Francisco. He had left Portland, Oregon, at 6:20 a.m., flew down the coast and buzzed San Francisco’s nascent skyscrapers at 1:45 in the afternoon, and then landed at Mills Field on the peninsula. The second the monoplane was in view of the field, some 5,000 people who awaited his arrival stormed the runway. Lindbergh had to circle repeatedly, gesturing he couldn’t land, until infantrymen were able to push back the receiving committee of thousands. 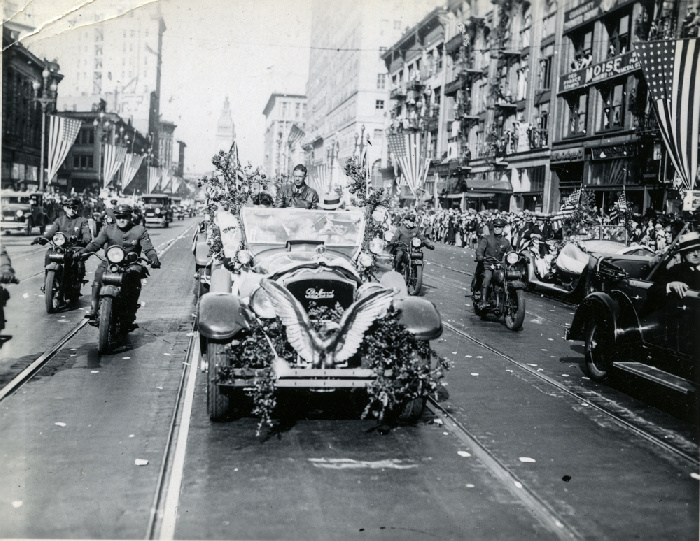 After his parade into the city, the flyer fought through the Civic Center (“a pin cushion for people,” a reporter described it) to City Hall’s balcony to be introduced by the mayor and to give a short speech. A reporter wrote that the weary Lindbergh spoke “as though he was reciting a piece he had learned by heart and he appeared relived when the piece was finished and he could sit down again behind the friendly screen of the balustrade.” He was presented with proclamations, scrolls, and medals from an eleven-year-old boy (representing San Francisco’s children), the postmaster (who recommended to Lindy that he marry a California girl), and the Swedish Consul-General (Lindbergh’s father was Swedish). 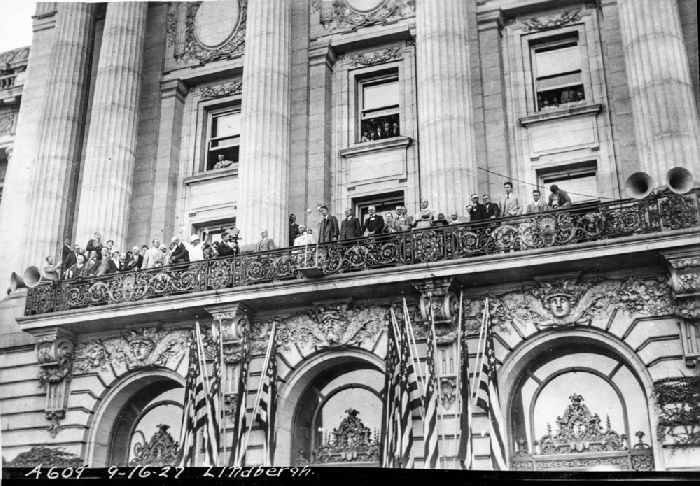 After a short rest at his hotel, where reporters asked for his opinion on the uncertain morality of modern youth, Lindbergh changed into dinner dress, and went to the Palace Hotel to dine with 1,800 of the city’s fine society. There he gave his much-practiced short pitch for the establishment and growth of commercial aviation—he proposed airports at all cities and predicted that passenger carrying planes would soon be widely used—before finally be allowed to retire for the evening.

The next morning, Lindbergh flew to Oakland, and did the same thing all over again.