In 2017, Western Neighborhoods Project added 15,000 image scans to this website and we wrap up the year at 25,000 historical views of San Francisco (with a few in the surrounding Bay Area).

Our great thanks go to the Bland Family Foundation and the city’s Historic Preservation Fund for providing the support to accomplish this achievement. Dave Lucas did an amazing job scanning the vast majority of the images, with help from volunteers Greg Gaar, Linda Pomerantz, and Steven Pitzenbarger. A larger group of individuals gave their time to research, describe, and map the thousands of images, and our particular thanks in this endeavor goes to Jaime Borschuk, Barbara Cannella, Emiliano Echeverria, Judy Hitzeman, William Kostura, Andy Lee, Judi Leff, John Martini, Tim McIntosh, Greer Montgomery, and Art Siegel (see the About page for a fuller list of all the dedicated volunteers to OpenSFHistory).

The latest update alone reveals the variety of images we have put up for public education and enjoyment this year. Here are ten of my favorites from the most recently posted: 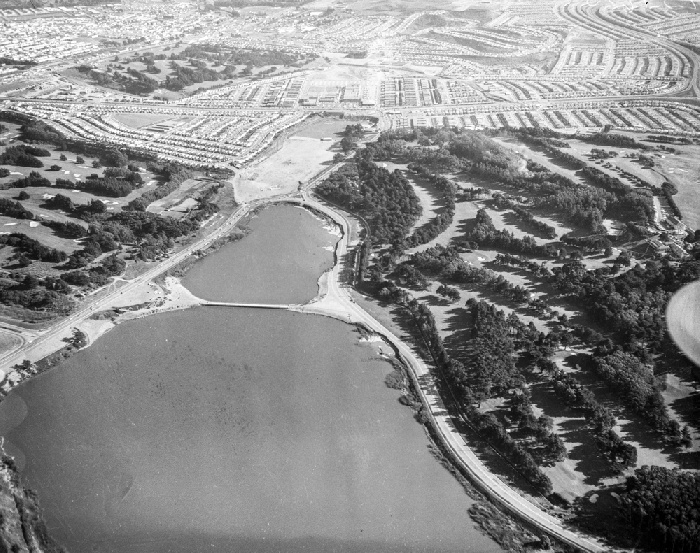 Taken after the 1957 earthquake, in which the most visible damage was evident around the lake’s roadways, this photo looks south past the concrete bridge separating South Lake from Impound Lake to the growing Westlake development. (wnp14.10911, acetate negative courtesy of a private collector.) 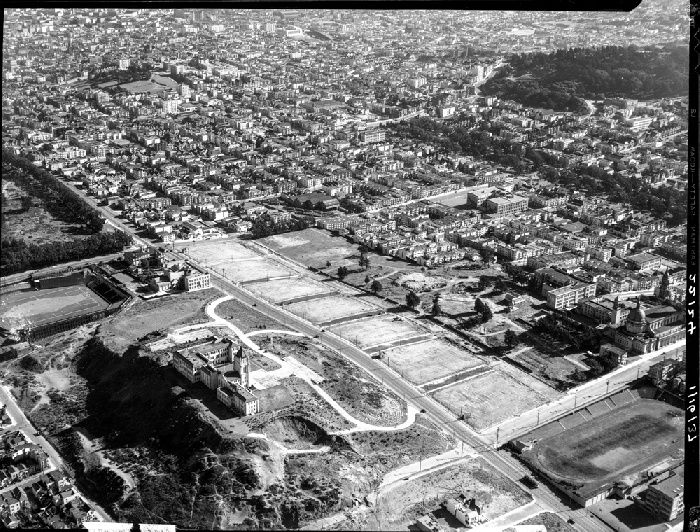 This view shows how much work was done to create the landscape around today’s University of San Francisco (USF). Lone Mountain’s peak has been flattened for the San Francisco College for Women campus (now part of USF). The Masonic Cemetery has been removed and blocks graded south of Turk Street for new homes. (wnp14.10919, acetate negative courtesy of a private collector.) 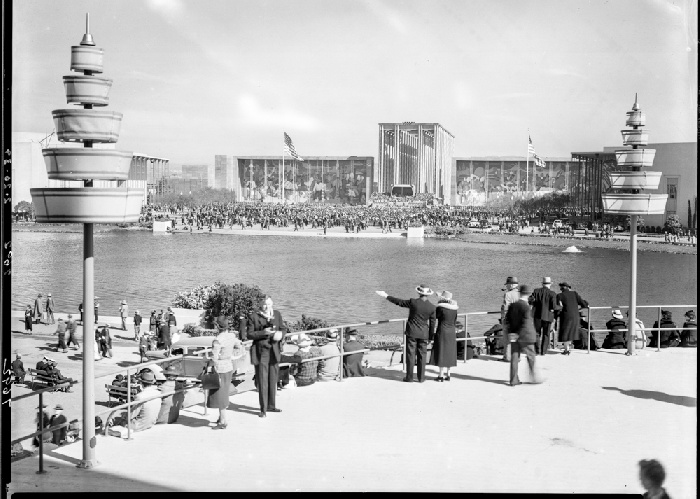 The scale of the plazas and monumental buildings created on Treasure Island for the GGIE are shown in this great image of the Lake of Nations and the Federal Building beyond on March 30, 1939. (wnp14.10925, acetate negative courtesy of a private collector.) 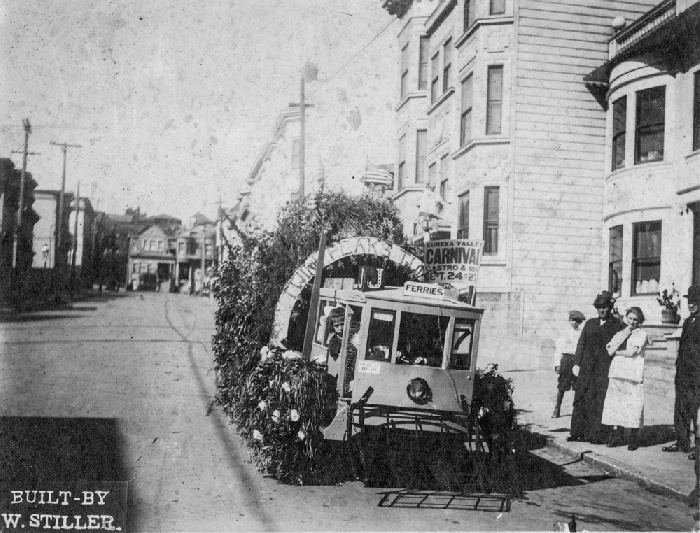 You have to love the guy who made his own little J-line streetcar AND a Twin Peaks Tunnel for it to come out of. This is Collingwood near 18th in the Castro, looking north, and the sign advertises a Eureka Valley Carnival, Sept 24-27. The centennial of the opening of the tunnel will be this February. (wnp27.5949, print courtesy of a private collector.) 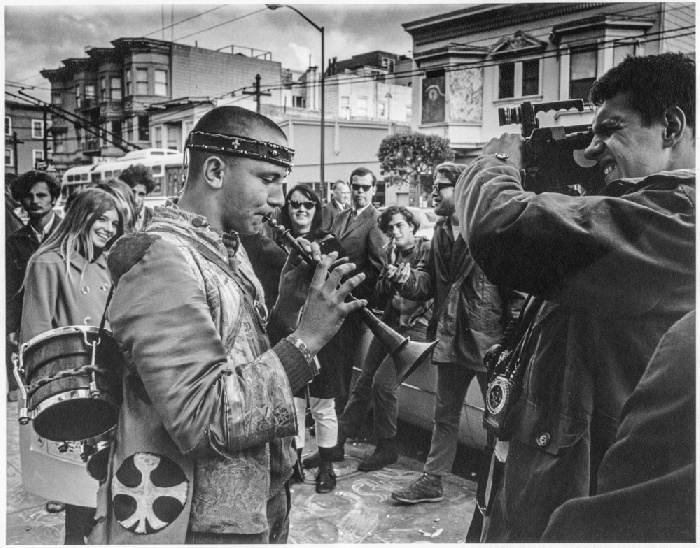 As we leave 2017 and the 50th Anniversary of the Summer of Love behind, this image of a Haight Street musician with a camera in his face perfectly illustrates the public fascination with hippies in 1967 and ever since. (wnp27.5954, print courtesy of a private collector.) 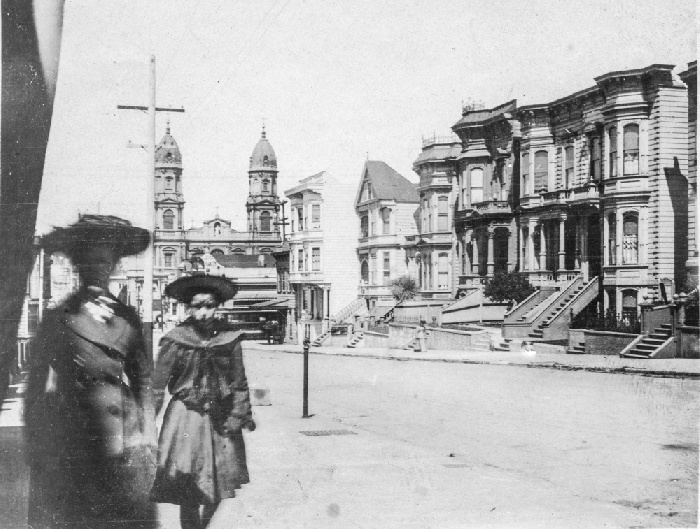 I used to pass this block of Bush Street near Webster daily on the 38AX bus headed downtown, and so love this “new” view of the neighborhood shown on June 5, 1905. A streetcar on Fillmore Street and the old St. Dominic’s Catholic Church are in the background. The next year, the April 18 earthquake shattered those twin-domed towers, but some of the residences on the far side of the street stand today. (wnp27.6046, print courtesy of a private collector.) 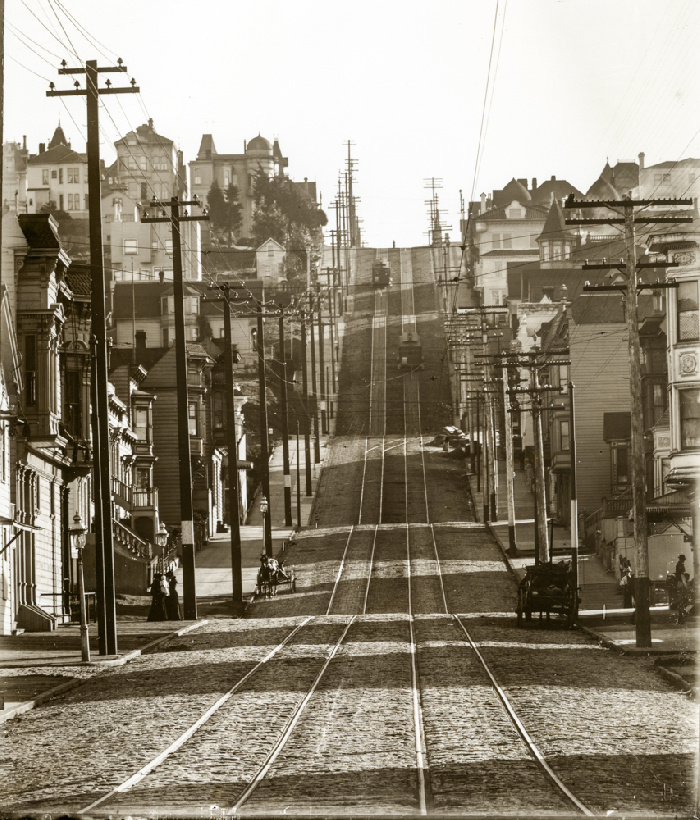 Farther north on Fillmore Street, one could transfer onto an unusual counterbalance car to go down the steep hill to Cow Hollow. In this stupendous circa-1905 photograph looking up cobblestoned Fillmore to Pacific Heights the descending car gives the power to pull the one going uphill. (wnp4.1537, copy print courtesy of a private collector.) 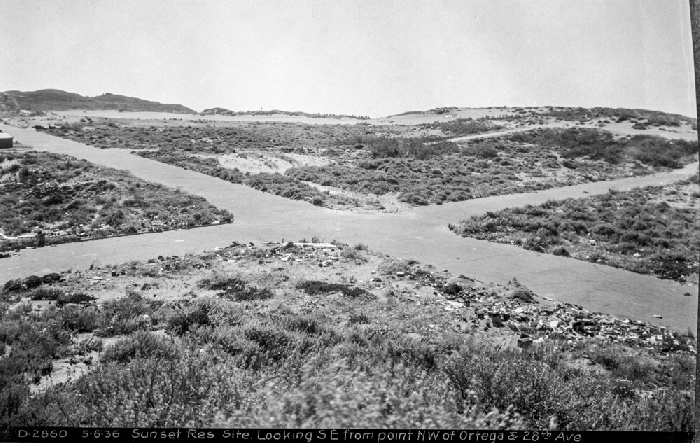 Images that originated from the San Francisco Water Department archives offer some rare scenes of transition between natural landscapes and developed neighborhoods. This view of the intersection of Ortega Street and 28th Avenue, taken May 6, 1936 to document the site for the Sunset Reservoir, looks like a haunted crossroad where a bluesman might meet the Devil. (wnp36.10115, copy negative courtesy of a private collector.) 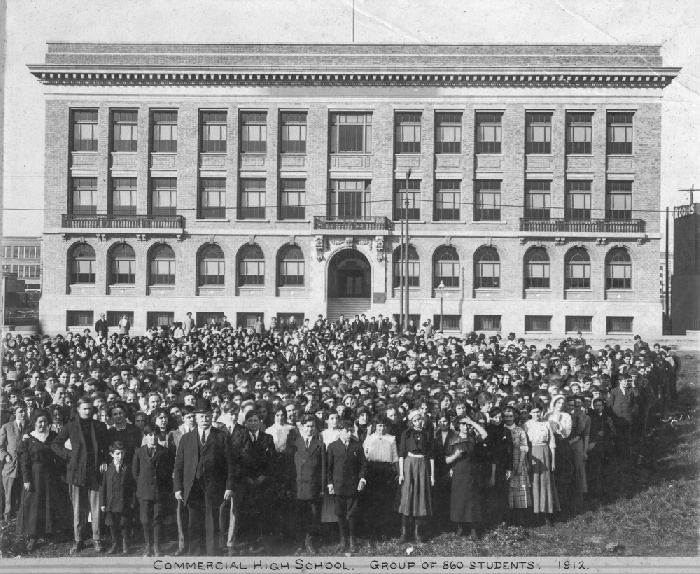 This high school building still stands, but not where these 860 Commercial High School students are posing in 1912. It was moved just a couple of years after its construction to make way for the creation of the Civic Center plaza we know today. The massive brick structure was rolled four blocks south and west to Fell and Franklin Streets. (wnp27.5944, print courtesy of a private collector.) 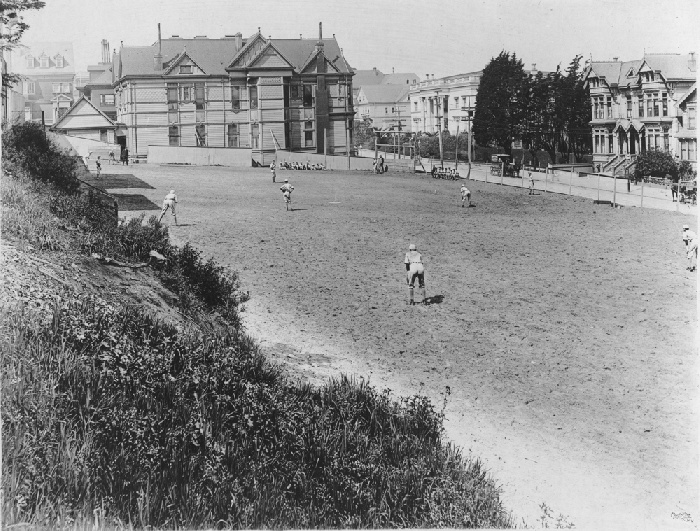 Part of the value of the OpenSFHistory program is to tap the public’s collective knowledge for images we can’t identify. We knew this sandlot baseball game on a hillside surrounded with fine Victorian homes was definitely in San Francisco. The little bakery wagon appears to have the business address of 1433 Divisadero on its side and the roadway has cable car tracks. We put it up as unidentified and hoped someone could figure out the location.

Quickly, in response to our public plea, friend and researcher Glenn Koch identified this empty lot being on Pacific Street between Franklin and Gough Streets. A couple of the houses visible in the background still stand, while the rest is gone today. (wnp27.5950, print courtesy of a private collector.)

Want more? We have a target of adding 15,000 more in 2018. If you would like to help our efforts, consider remembering us in your year-end giving with a donation to Western Neighborhoods Project.

Happy holidays and best wishes for the New Year from all of us!