Founded in 1860 as the United States’ first private athletic club, the activities of San Francisco’s Olympic Club once dominated the local sports pages. Boxers, shot-putters, bicyclists, and swimmers set world records and won Olympic medals with the club’s “flying O” logo on their chests. With a mission to foster excellence in amateur athletics, the organization embodied the spirit of the Olympics three decades before the modern games were invented. 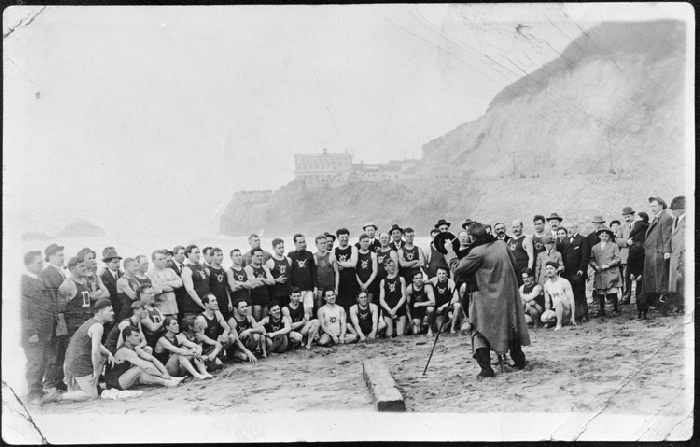 At the beginning of the twentieth century, the Olympic Club was well known for an annual New Year’s Day member run on Ocean Beach. Noncompetitive, the event sort of resembled the party atmosphere of today’s Bay to Breakers race without the elite Kenyans or naked people. The men—women were only admitted as members beginning in 1992—ambled through Golden Gate Park from Baker Street, changed into bathing suits, and, as a group, splashed through the waves. After their horseplay in the brisk Pacific Ocean, the club members retreated to the Cliff House or one of the other beachside cafes for lunch and libations. 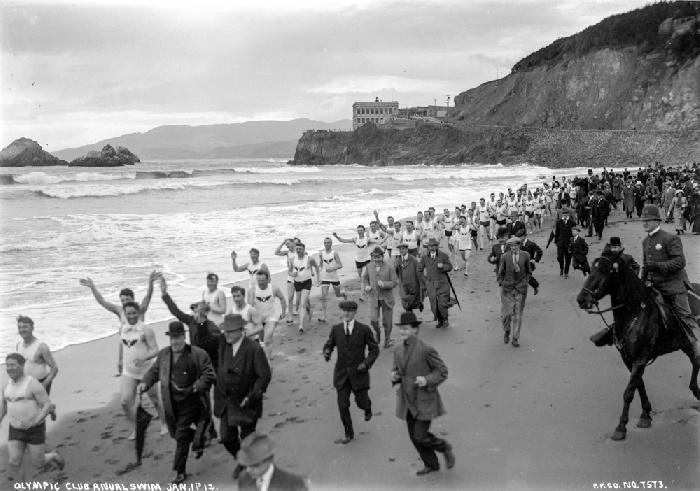 In later years, club histories claimed the New Year’s Day run started in the early 1890s, but its seems it was inspired by a Christmas Day romp in 1903. In glorious sunshine, the “wearers of the winged O” bobbed in the waves and skylarked on the beach while hundreds of San Franciscans, drawn out by the holiday and the fine weather, watched the men wrestle, sprint, and swim. The San Francisco Call reported that photographs of the event would be sent to the World’s Fair the next year in St. Louis to “advertise the equable climate of California” because “Easterners will hardly believe that residents of this city were able to swim in the ocean on Christmas day.” 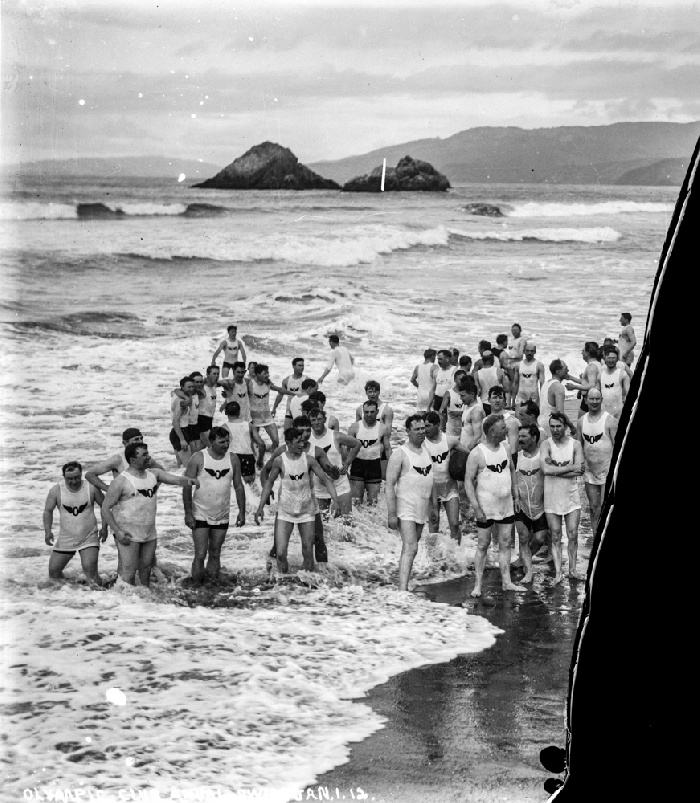 Delighted with the event, the Olympic Club held the first organized New Year’s Day run on Ocean Beach the next week and a tradition was born. Every year afterwards local newspapers featured photos of dripping wet men cavorting in the waves and published alongside the images reports of goggling Easterners amazed at such ample proof of California’s mild and pleasing climate. (Writing as one who has gotten his feet wet at Ocean Beach, I suspect the reporters conspired to suppress the hypothermia cases.)

When San Francisco had its own fair planned—the Panama Pacific International Exposition of 1915, held in today’s Marina District—the San Francisco Call’s headline of January 2, 1912, made clear the promotional quality of the beach run: “Olympic Clubmen Lure Easterners, Annual Run Pictured to Draw the ‘Oh, So Colds’ Westward.” By then the run drew thousands of onlookers, and long distance swimmer Walter Pomeroy entertained the crowd with a swim around Seal Rocks just before noon.

Does the tradition continue today? Take a walk on Ocean Beach on January 1st to find out.