On September 9, 1875, Mayor Otis unveiled a new public fountain at the intersection of Market and Kearny Streets. The cast-iron monument with Gold Rush scenes, sailing ships, and lion head decorating its sides was a gift from entertainer Lotta Crabtree. San Francisco had embraced and celebrated her as prodigious child talent. Now she was the highest paid actress in the nation, the belle of Broadway, and she wanted to show she remembered and appreciated the city that made her a star.

At the unveiling ceremony, held on the 25th anniversary of California’s admission to the United States, a reporter archly noted that the crowd “consisted largely of idle hoodlums, to whom it was apparent that water would be a precious boon…” Lotta’s aunt, no doubt excluded from the reporter’s label of hoodlumhood, took the first draught from the fountain. 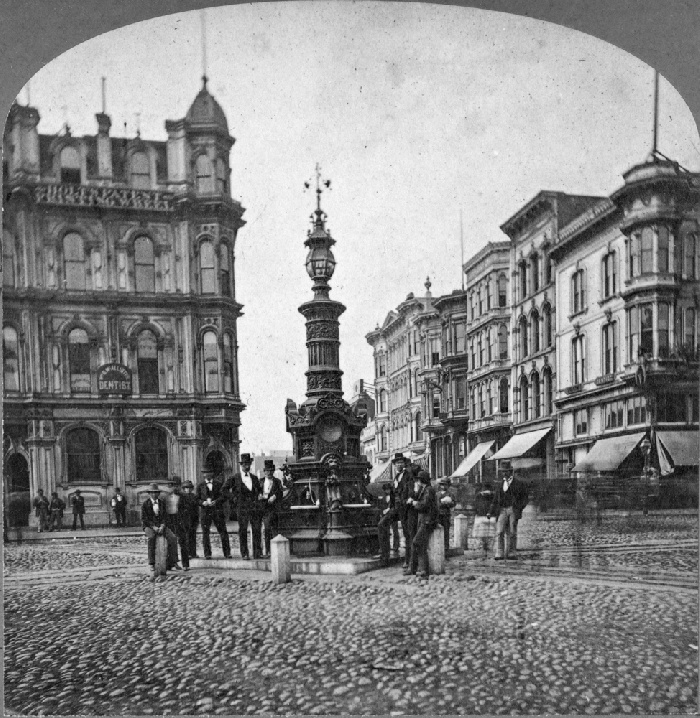 View up Geary from Market. Idlers enjoying a drink, circa 1880. (wnp24.0033a, stereocard view, courtesy of a private collector.)

One of the speakers at the ceremony predicted, “the solid iron fabric must last and survive the ruins of centuries and the name of the kind-hearted little actress will long be upon the lips of those who will in the far distant future experience the benefit of her thoughtful deed.”

The provision of clean, accessible drinking water in a teeming dirty city was rightfully considered a generous public benefit in the nineteenth century. (The ongoing contamination of water in Flint, Michigan serves as a reminder of what we take for granted.) 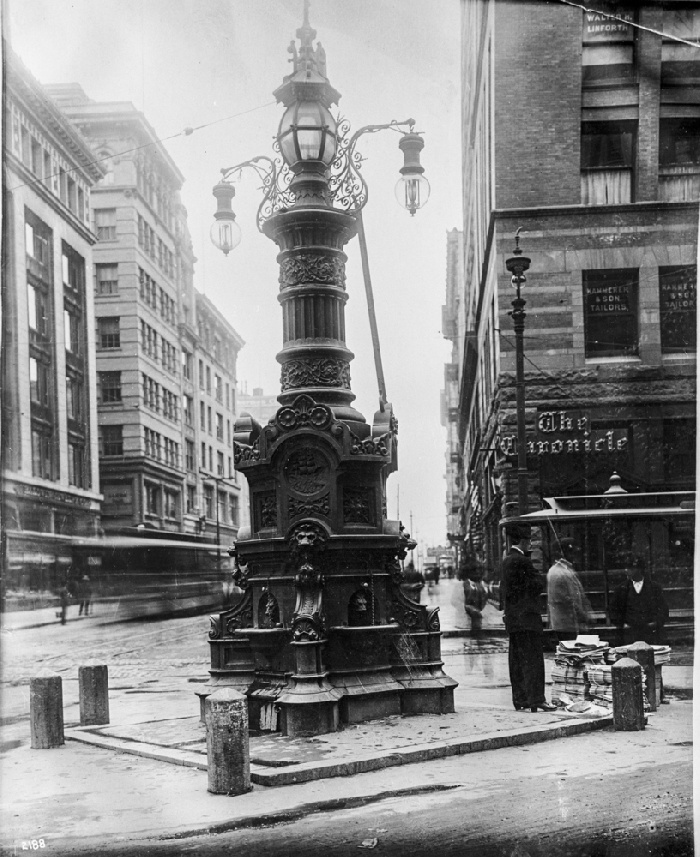 View north up Kearny in 1914. The fountain had been modified with extra light fixtures. (wnp36.00683, Department of Public Works, DPW book 10, image 2188, copy negative courtesy of a private collector.)

But while Lotta’s name lives on, water from the lion’s mouths has not proven the reason the fountain holds such a place of reverence for San Franciscans. For 142 years the fountain has been a meeting place, a beacon, a lighthouse set amidst tides of human traffic at one of the city’s busiest intersections. 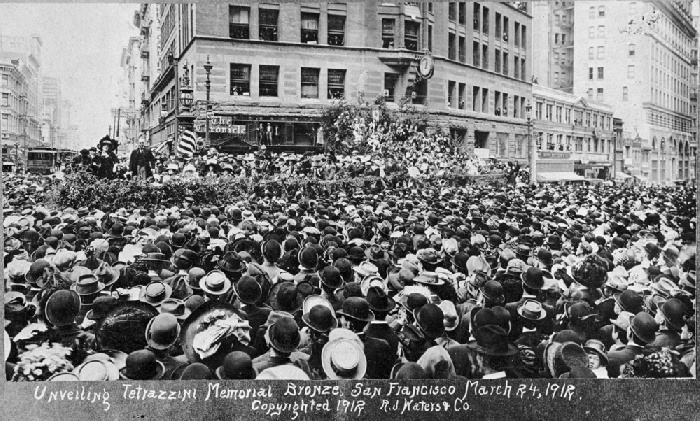 Soprano Luisa Tetrazzini, who had sung in a Christmas ceremony at Lotta’s Fountain in 1910, was honored with a commemorative plaque affixed to the fountain on March 24, 1912. (wnp37.01984, R. J. Waters postcard image, courtesy of a private collector.)

In 1916, as the city expanded its installation of grand “Path of Gold” light standards along Market Street, the shabby state of Lotta’s Fountain became a theme of letters to the editor of the San Francisco Chronicle. A new streetcar pole obscured it. Grimy newspaper boys congregated too close. The whole thing needed a paint job.

In January 1917, artist and park commissioner M. Earl Cummings submitted a plan to the Board of Public Works to add a tall shaft and extend the monument to the height of the new light standards. By mid-1917 it was done and now letter-writers complained it was a desecration and Lotta Crabtree must be insulted. (Crabtree, living on the East Coast, apparently gave her approval for the modification.) 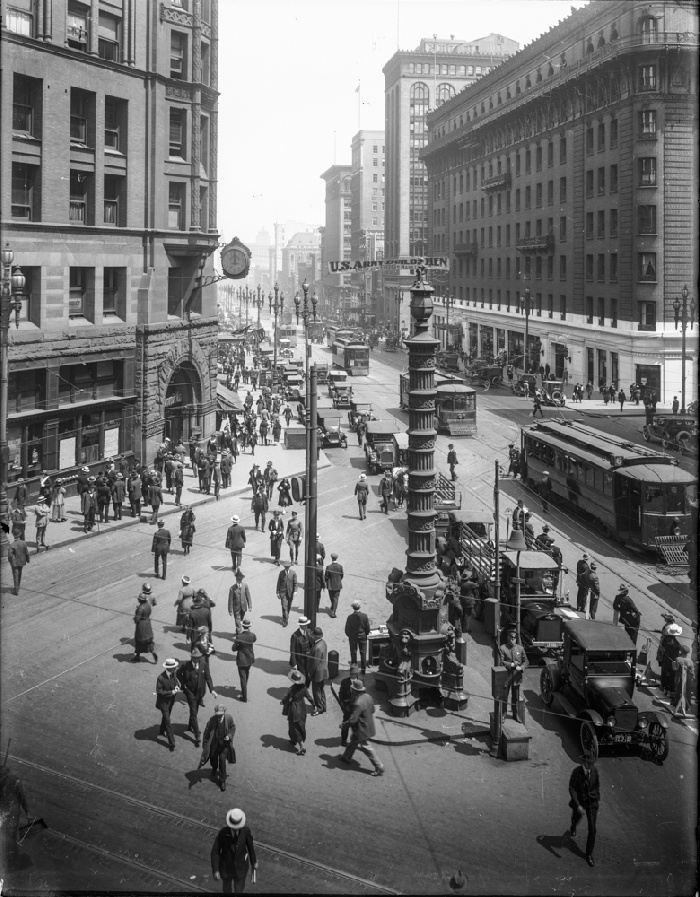 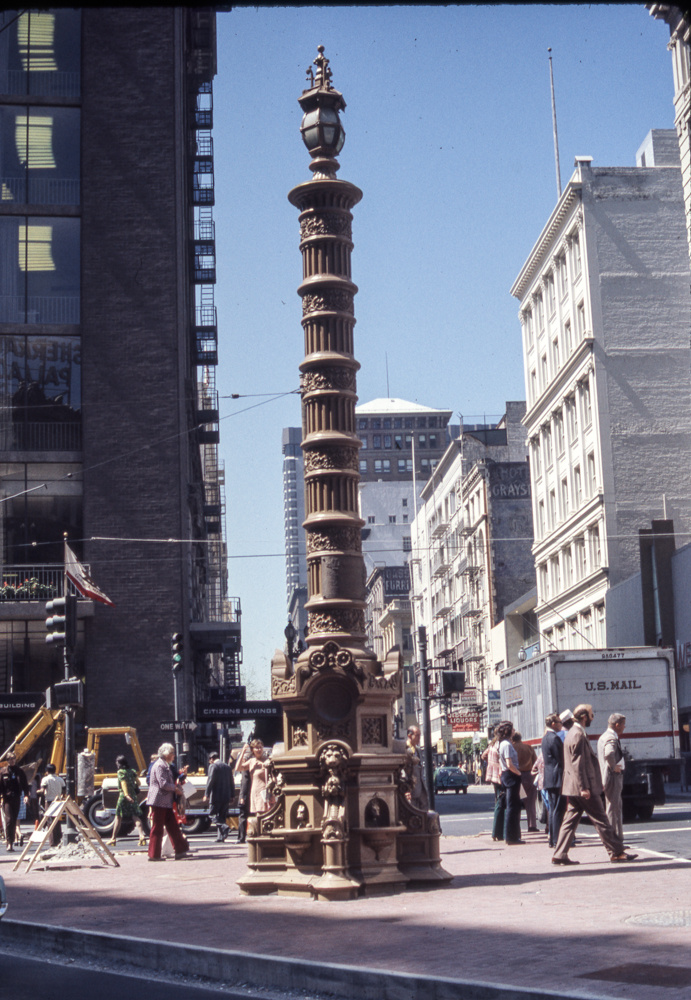 The super-sized version lasted until 1998, when a windstorm damaged the shaft. A restoration effort brought the landmark back to its original height. The fountain supposedly is once again able to run, although I can’t say I have ever seen a drop of water come out of it in my lifetime.

We put online, on average, 300 historical images each week. With more than 25,000 scans now on OpenSFHistory, it’s difficult to sift through the riches. Below, from just the 333 most recently posted, I have chosen five (really six) great San Francisco views.

This batch contains a lot of early and later commercial views from photographers such as Isaiah West Taber, Eadweard Muybridge, and Zan Stark, images that were frequently published at stereoviews and postcards. Some are numbing in their familiarity (the cable car turnaround on Powell… again), while others are delightful surprises (check out the Hammam Turkish Baths on Grant Avenue). It was hard to chose just five, but here we go: 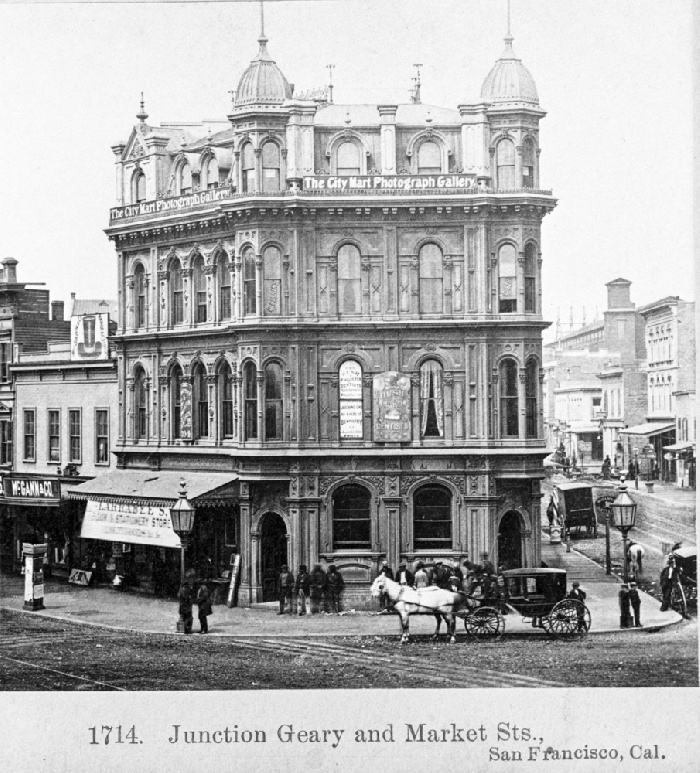 I have always had a soft spot for this little office building that stood on the gore between Market and Geary. Built in 1867, it hosted a series of dentists, cafes, and news stands across from Lotta’s Fountain while larger and larger skyscrapers, such as the Chronicle and Call buildings, rose around it. (wnp37.01786, copy negative courtesy of a private collector.)

Here it is rebuilt after the 1906 earthquake and fire, with the Mutual Bank Building trying (and failing) to intimidate it (wnp37.01526, copy negative courtesy of a private collector.): 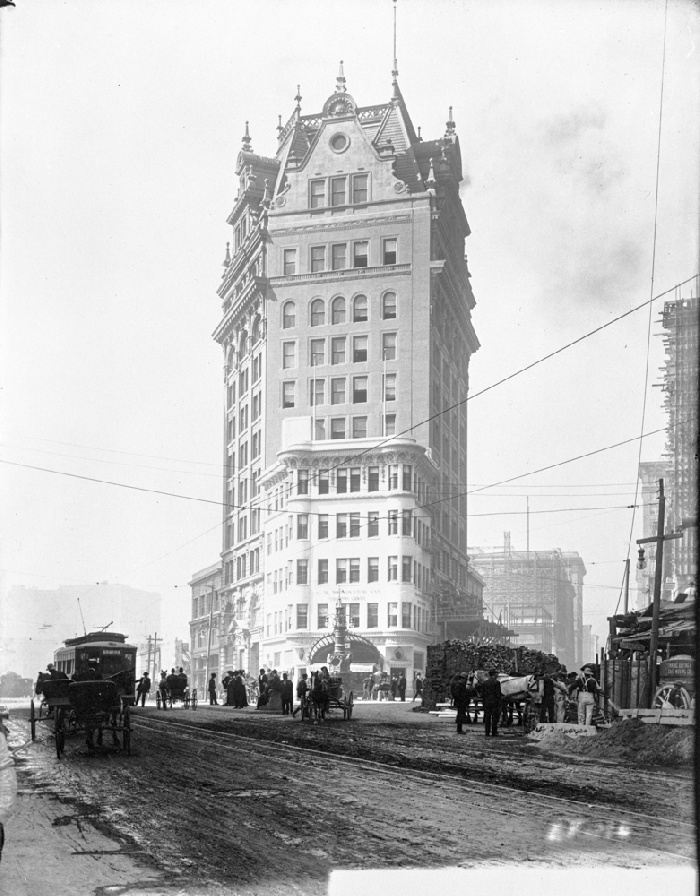 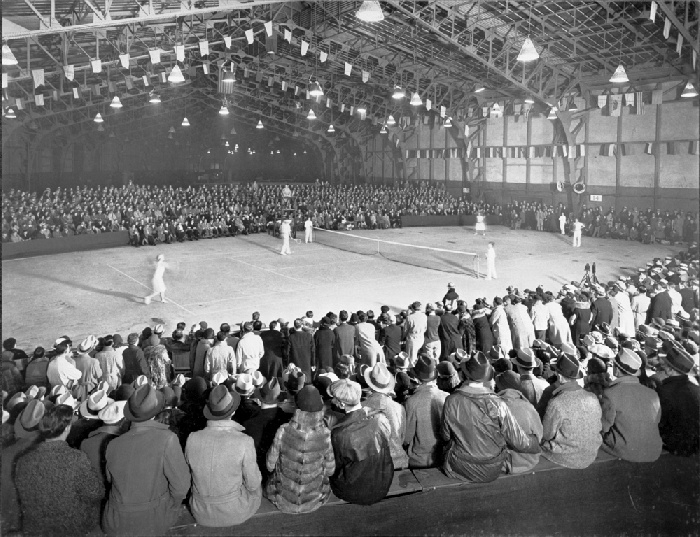 Looks like a mixed doubles match is in progress inside the Palace of Fine Arts. Since the Exploratorium left the building, there have been some struggles to find a proper use for the cavernous hall adjoining the beautiful dome, colonnade, and lagoon from the 1915 Panama-Pacific International Exposition. Maybe indoor sports is the answer? (wnp37.01775, copy negative courtesy of a private collector.) 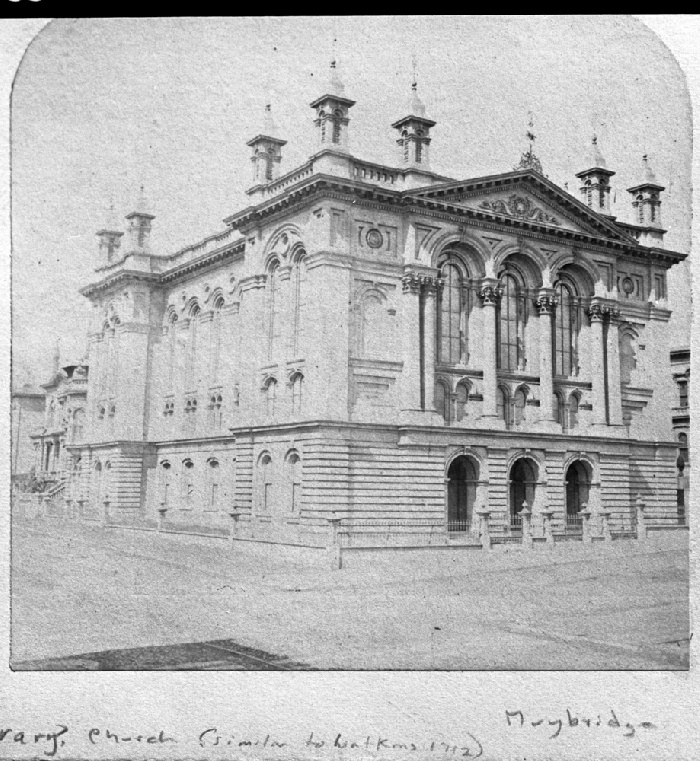 At one time, the northwest corner of Geary and Powell, facing Union Square, was a serene place for a church. But the busy city grew westward, and the leaders of Cavalry Presbyterian, who had already moved the church once, took apart the whole structure—one million bricks—and rebuilt it on the corner of Fillmore and Jackson Streets, where it still stands today. Now the St. Francis Hotel rises from this very busy corner. (wnp37.01597, Eadweard Muybridge photograph, copy negative courtesy of a private collector.)

Masonic and Fulton, circa 1890 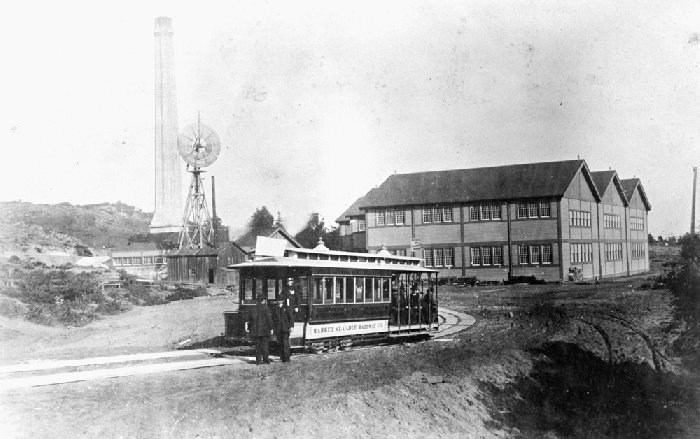 Yes, at one time you could take a cable car all the way west to Masonic and Fulton. The site of the facilities of the Market Street Cable Railway, then a very undeveloped locale, is now in the heart of the city near the University of San Francisco. (wnp37.01668, copy negative courtesy of a private collector.) 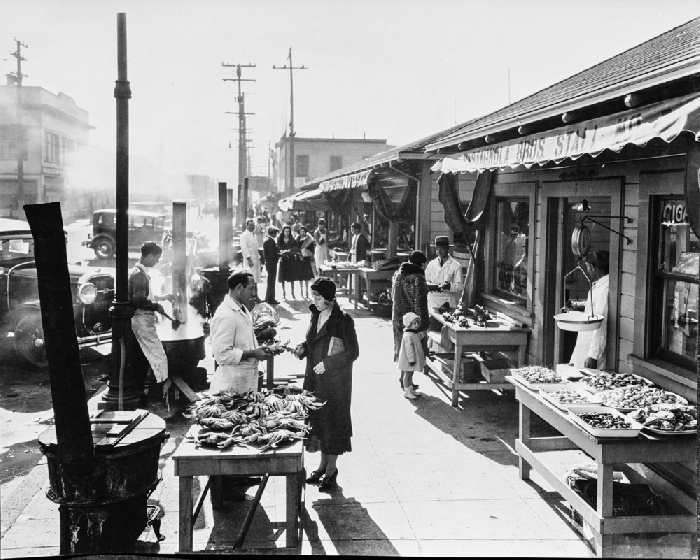 OK, maybe yet another shot of the iconic tourist destination isn’t terribly exciting, but I love the composition of this photograph, the little girl, and the simple way the Castagnola Brothers display their catch on the tables. (wnp37.01744, copy negative courtesy of a private collector.)

Take a look at all 333 recently-uploaded images. If you have a correction, comment, or can help us identify the location of our current mystery shots (which street is this parade on?), just click on the button that says “Contact us about this image” in the right column.