This weekend, March 3-4, 2018, San Francisco History Days will once more fill the Old Mint at 5th and Mission Streets. While the main draw for the free event is the gathering of history groups, authors, presenters, museums, libraries, and interpreters of the city’s past, a close second for many is an opportunity to walk around inside the massive historic landmark itself. 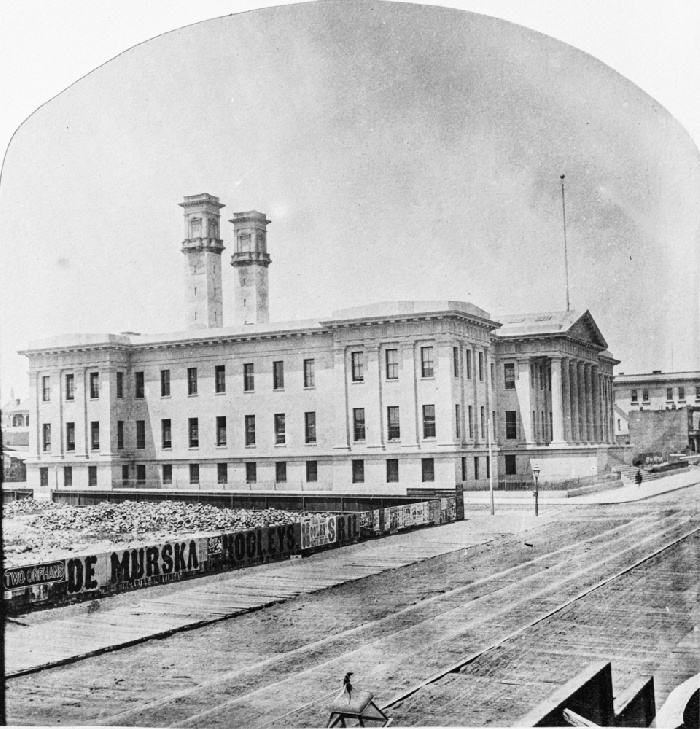 Looking north on 5th Street across Mission at the Old Mint in May 1875, shortly after it opened. (wnp37.01599, copy negative from Marilyn Blaisdell Collection, courtesy of a private collector.)

Opened in 1874, the classical Greek Revival temple to coinage survived the 1906 earthquake and firestorm thanks to heroic efforts by the employees under the supervision of Frank Leach. Minting operations ended onsite in 1937 as the Treasury Department moved west to a new building at Hermann and Buchanan streets. The Old Mint building was unused and forlorn-looking for years—many of us remember going inside as school children in the 1970s and 1980s, when a small museum operated out of part of the cavernous complex. 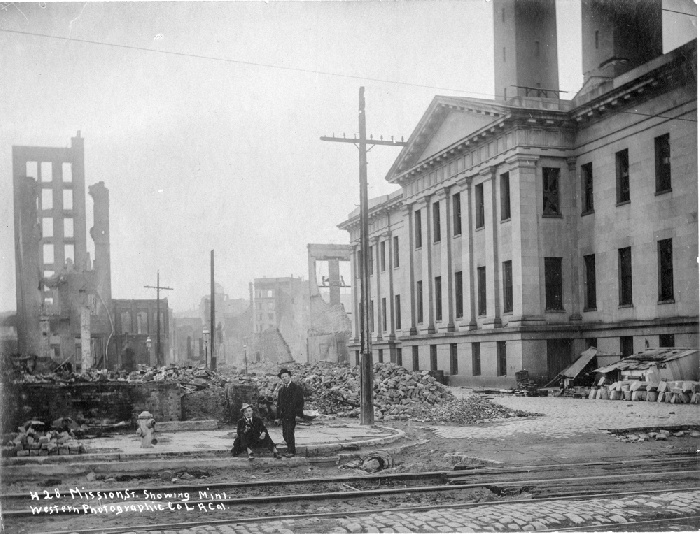 The steep entry steps to the portico entry, elegant public counting rooms, and massive smokestacks rising behind the center courtyard are impressive in a way the new overcompensating Salesforce Tower can’t quite capture. The curving bannisters, inscribed doorknobs, and vault brickwork speak to an era when “craftsmanship” and “government building” could keep company in the same sentence. 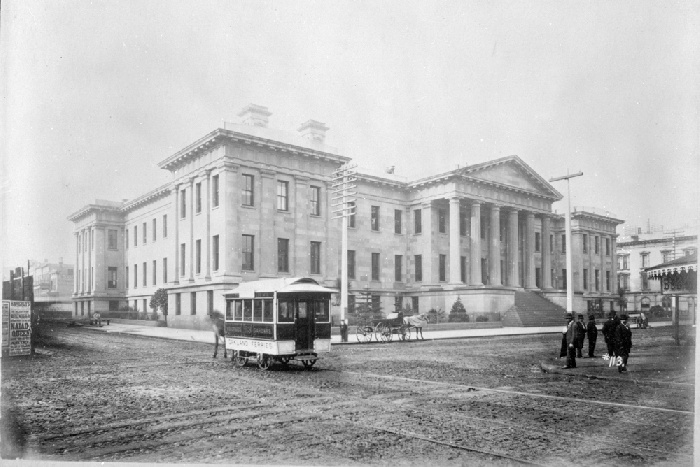 Horse car passing the intersection of 5th and Mission Streets with U.S. Mint behind, circa 1883. (wnp26.338, courtesy of a private collector.)

The Old Mint’s future has been up in the air for decades. The San Francisco Museum and Historical Society tried to turn it into a city history museum, but the 2008 economic crash killed initial fundraising efforts and the group could never really get out of the hole. A new effort spearheaded by the California Historical Society has gained some traction (and funding) to restore and revive the national landmark. Specific plans are still in development, but historical interpretation and public accessibility are almost certainly two main starting points.

Here are a few of our historical images of the Old Mint to whet your appetite, but make sure you come out to see the real thing this weekend. Western Neighborhoods Project will be there as we are every year. Drop by our table and say hello! 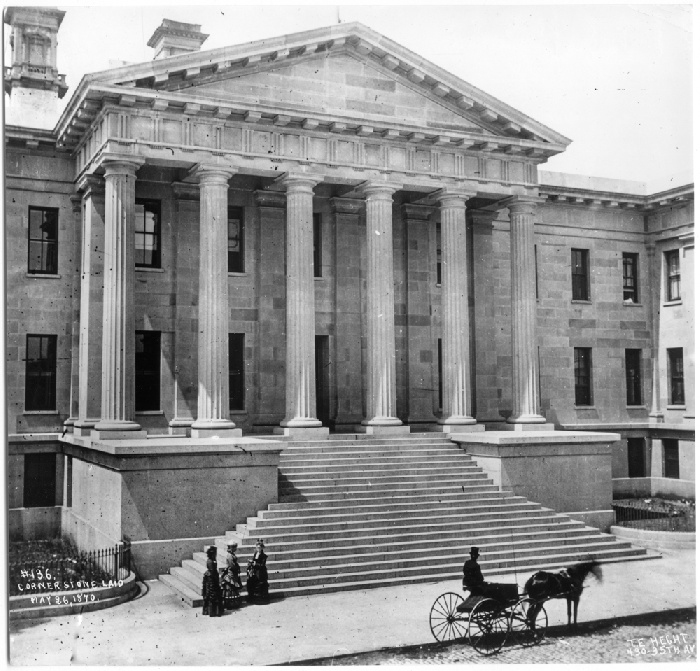 Front steps and portico entrance to U.S. Mint, circa 1875, showing in detail the sandstone facade and original chimneys. (wnp27.6093, print courtesy of a private collector.) 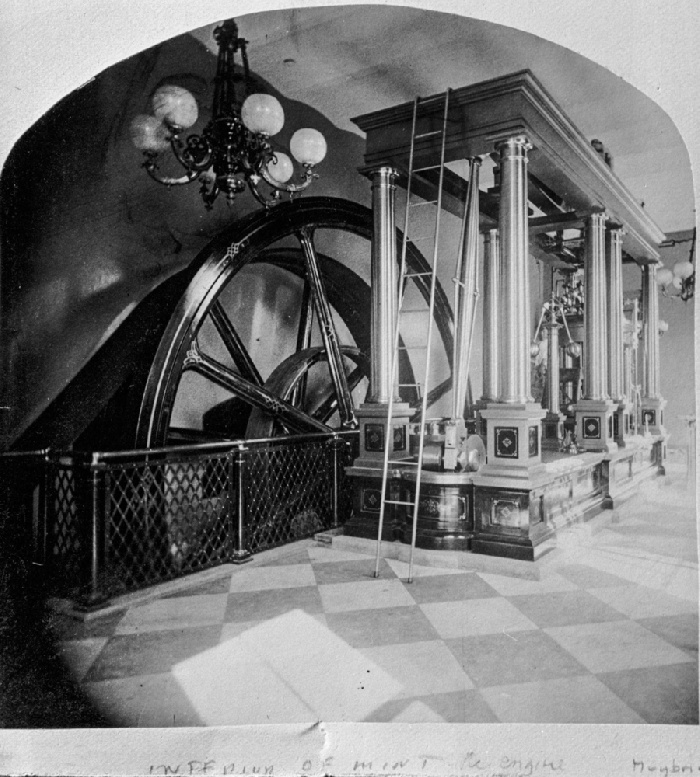 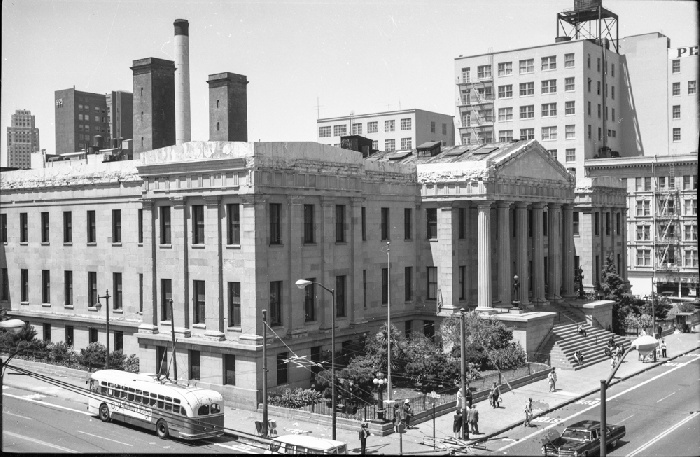 The roofline and cornice work of the building had significantly deteriorated by the 1960s. Intersection of 5th and Mission taken from parking garage. (wnp147.1670, John Harder photograph. Print courtesy of a private collector.)