In early March 2018, excavation work in a parking lot of the City Center shopping complex on Geary Boulevard between Masonic Avenue and Lyon Street unearthed dozens of grave markers and cut stone. Workers carefully stacked the headstones and granite curbs in piles while an archaeologist on site noted what was found.

We shared the news on Western Neighborhoods Project social media (facebook.com/outsidelands and @outsidelandz on Twitter) where even long-time locals expressed surprise to learn that, in the heart of the city, thousands of San Franciscans had been laid to a final rest that turned out to be only temporary.

The shopping center and the Anza Vista neighborhood to the south had all once been part of the Roman Catholic Calvary Cemetery. The archdiocese purchased the land on August 16, 1860, when Divisadero Street represented the western edge of the City of San Francisco. Calvary was one of four major cemeteries established in the 1850s and 1860s around Lone Mountain: to the north was Laurel Hill Cemetery and on the west were the Odd Fellows Cemetery and Masonic Cemetery (the origin for the name Masonic Avenue). 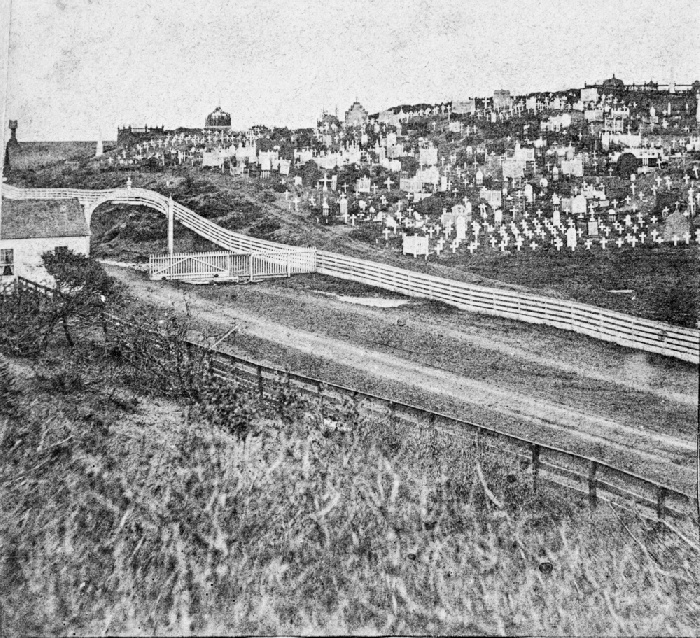 Calvary Cemetery, circa 1865, looking southeast over the Point Lobos Road (now Geary) near Masonic Avenue; tollhouse and gate for the road; (wnp37.01364, Marilyn Blaisdell Collection, courtesy of a private collector.)

Beginning in 1864, the Central Railroad horse car line carried visitors up Bush Street to the land of the dead, terminating at what was known first as Cemetery Avenue, then Central, and now Presidio Avenue. There, those looking to continue farther west could rent a horse and buggy and pay a toll to drive on the Point Lobos Road (today Geary) to Ocean Beach. Beginning in 1880, the Geary Street Park & Ocean Railroad ran cable cars to the summit, where those headed for Golden Gate Park could transfer to a small steam train that went as far as 5th Avenue and Fulton Street. 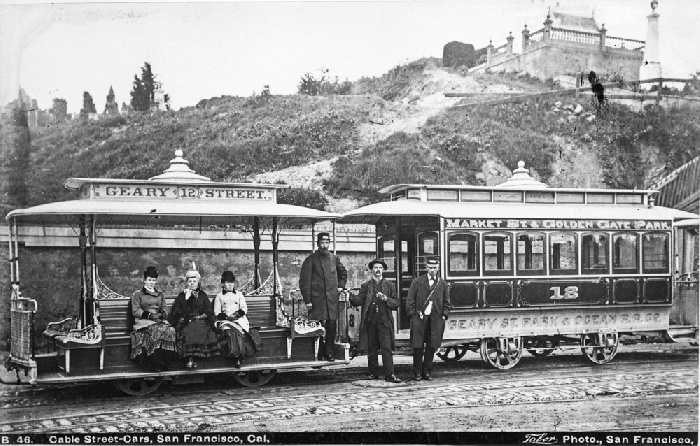 Calvary Cemetery’s first entrance was at the Central/Point Lobos transfer point—today’s Presidio Avenue and Geary Boulevard—but the riotous behavior from saloons that opened at the intersection forced the Archbishop to create a new entrance on the east side at Ellis Street. For four decades Roman Catholics of the city were laid to rest on the hillside.

The City of San Francisco banned new burials within the city limits in 1901. As development stretched west, Richmond District neighborhood groups, real estate concerns, and leaders in city government agitated for the cemeteries to be removed from San Francisco altogether. Masonic and Odd Fellows Cemeteries were the first to go in the 1930s. After a long fight, Laurel Hill and Calvary succumbed at the dawn of World War II. Those from Calvary were reinterred at Holy Cross Cemetery in Colma, California.

In the early 1950s, the Calvary Cemetery land was redeveloped as Anza Vista featuring a large Sears department store, today’s “City Center,” with a Target, Ulta Beauty store, Starbucks, and a couple of small quick-food restaurants.

Holy Cross Cemetery shared our Facebook post on the recent excavation, and has apparently agreed to take the stones: “We received these remnants from the contractor this morning and are busy researching what names we can decipher.” Preliminary research indicates that the people were indeed relocated to Colma, even if some of their memorials were not. 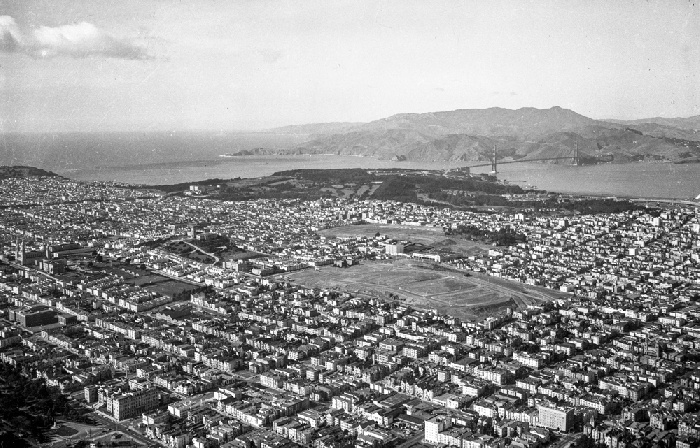