In May 1906, San Francisco was still recovering from the great earthquake and fires that had destroyed most of the city a month earlier. In addition to caring for the refugees camping in parks in tents and shanties, the city faced restoring vital services and transportation links to rebuild the city. A massive clean up job was underway.

Researcher Robert Bardell has written a comprehensive analysis of how the remains of thousands of buildings, twisted rails, and buckled streets were cleared away. He notes, “The unsung heroes of this story are men and animals, not machines.” With some limited use of derricks, steam engines, and explosives to demolish large building walls, it was muscle, sinew, picks, and shovels that did most of the work. I recently came across a newspaper article from 112 years ago this week that illustrates Bob’s point. 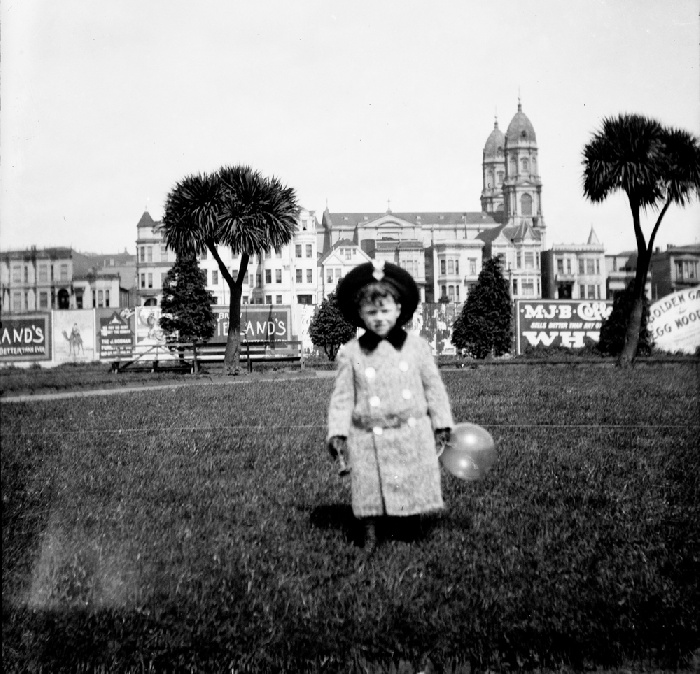 St. Dominic’s two towers are visible in the distance viewed from Hamilton Square before the 1906 earthquake. (wnp14.0896-1.jpg, David Peyser photograph; Courtesy of a private collector.)

St. Dominic’s Catholic Church in the Western Addition at Bush and Steiner Streets suffered heavy damage from the earthquake; its north tower was shaken away to the spired framework and surmounting cross while the south tower had part of its dome still intact, apparently balanced precariously on a point. Outside of the fire zone, it was a popular subject for photographers, and we have dozens of images in OpenSFHistory, both professional and amateur. 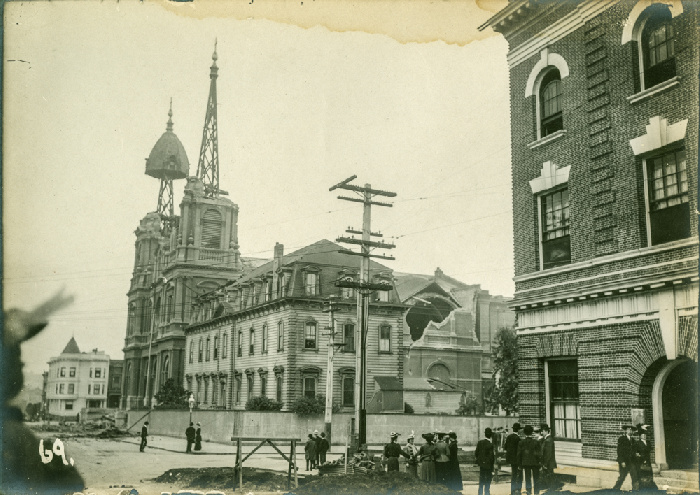 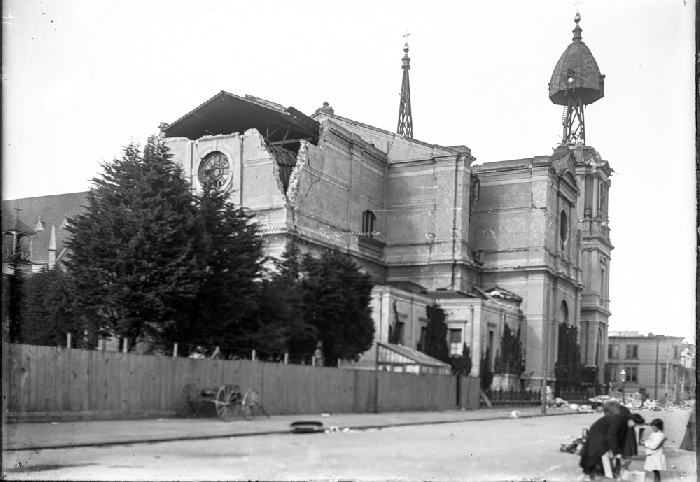 On May 14, 1906, a gang of wreckers was dispatched to pull down the southern tower, using a wire cable pulled by a steam engine set up at Pine and Steiner Streets. The cable snapped. The workers tried repeatedly the same method, but each time the cable broke or yanked free of its attachment to the stubborn tower. Finally, three men—Gus Moore, Paul Abel, and Joseph Lewis—were dispatched to climb the tower and weaken the supports. The San Francisco Chronicle reported the next day “The scene was an impressive one and was viewed by considerably more than 1000 people.”1 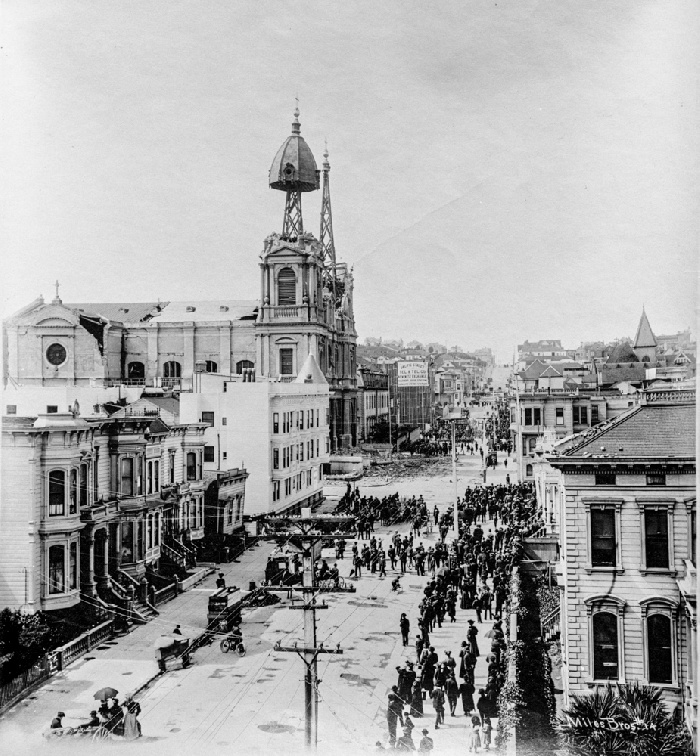 “First these men used saws on the timber supports, cutting through until the merest strip of solid timber remained. Then they descended, and again the strain was put on the cable and again the cable snapped. Abandoning the saw, the men took their axes with them on their later trips and wielded them persistently, until those who stood far below, with necks craned, feared that the supports would collapse, and let the tower down on the fearless men, who smoked their pipes as they stolidly swung their axes.”

After four hours of labor, the men and the machine finally pulled the tower down. It crashed through the center section of the church, covering the front entry steps.

Once the dust had settled the crowd rushed upon the pile of ruins, along with the wreckers and police on duty, “for in its fall the tower had carried away the great, glimmering cross that surmounted the center of the front wall, and the cross was somewhere under the debris.”

The cross was unearthed from the debris intact. “As the crowd had looked at it before the fall it had seemed a small thing, possibly a foot high, but when it was taken out of the ruin it required the united strength of eight sturdy men to carry it to a place of safety.”

Perhaps the cross was incorporated into the rebuilt St. Dominic’s, which, retrofitted with buttresses after the 1989 earthquake, still stands at the corner of Bush and Steiner.