What I love about historical research is the way it opens up the past and allows us to connect with people, understanding ourselves more in the process. I had one such experience this week in relation to two negatives that caught our attention early on in processing the OpenSFHistory archive, but didn’t get my focus until now. Historical kismet is a very real thing. After some sleuthing, we learned that these negatives showed the aftermath of the Baldwin Hotel fire of 1898. 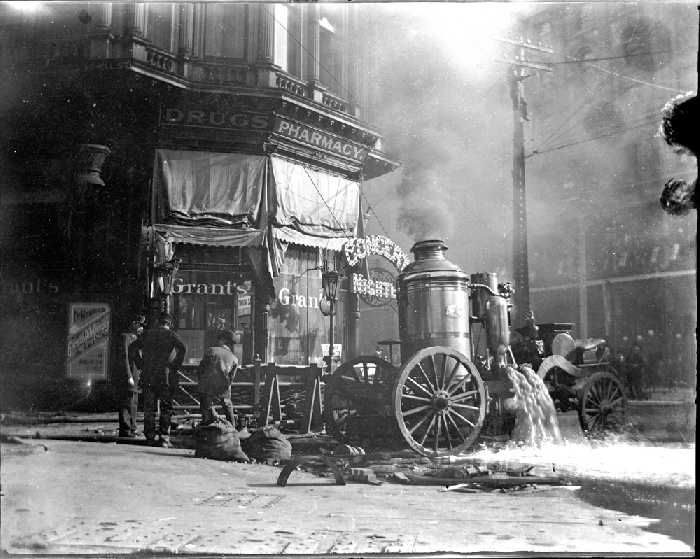 One of the two negatives that caught our attention showing fire wagons pumping out water after the Baldwin Hotel fire on November 21, 1898. (wnp14.0979, negative courtesy of a private collector). 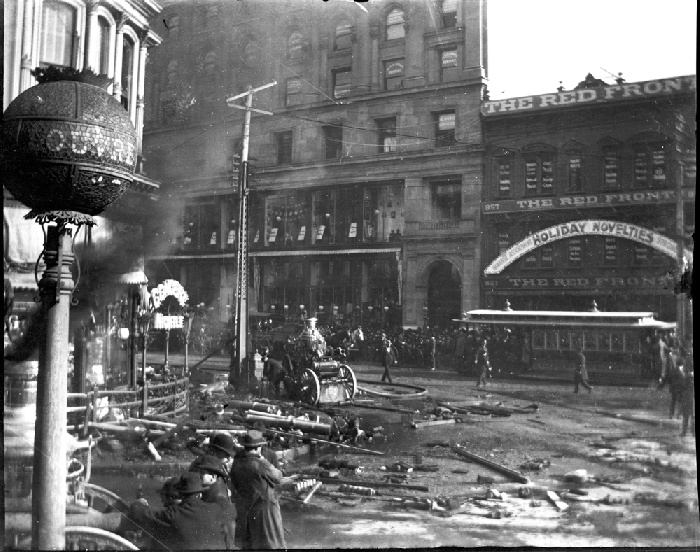 Built by Elias Jackson Baldwin at Powell and Market Streets in 1878, the Baldwin was second in luxury to only the Palace Hotel and in the early morning hours of November 23, 1898, it burned to the ground. As I researched more about this event, I learned more about Baldwin, his life, and its curious intersections with my own—proof that history is always unfolding, becoming more relevant and intimate the closer we care to look. 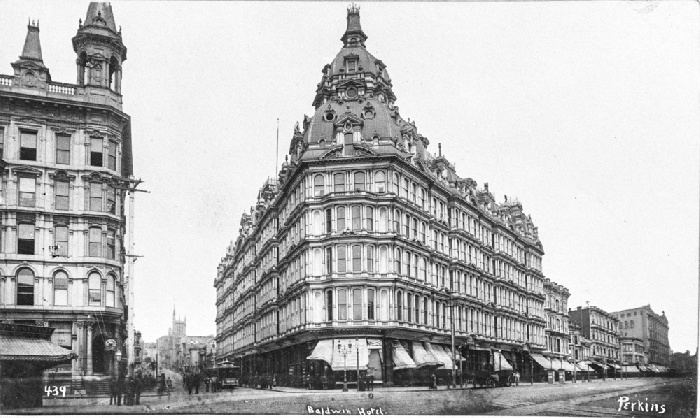 A Perkins street view of the opulent Baldwin Hotel at Market and Powell Streets, 1885. (wnp37.00277, Marilyn Blaisdell Collection, courtesy of a private collector).

Elias was better known as “Lucky” after striking it rich on a single Comstock silver mine plunge worth over $2 million. He used this profit to purchase thoroughbred horses from Kentucky as well as broad swaths of ranch land in Southern California between 1875 and 1880. At his Santa Anita ranch, he raised livestock, bred horses, stocked a nursery, and made brandy and wine from crops grown onsite. It was also here, a little over a hundred years later, that I would grow up and live most of my young adult life.

As lucky as he was in business, Baldwin was less lucky in love—peppering four marriages with innumerable affairs. He had two daughters (that he knew of), but his daughter Anita was by far his favorite. Born in San Francisco to Lucky and Jane Virginia Dexter, she was the “belle of the Bay Area in her youth,” and, at the age of almost 16, she secretly married George W. Baldwin—a clerk at the Baldwin Hotel who also happened to be her second cousin—on a tugboat just outside the Golden Gate in 1892 on January 5 (my mother’s birthday). The elopement coincided with Lucky’s trip to the Santa Anita ranch, and newspapers rolled out headlines like “Lucky Baldwin’s Daughter Anita Mated Against His Wishes.” Clearly, working and living at the Baldwin Hotel was no longer an option so George took a job in the county clerk’s office, working out of City Hall, and the couple took rooms with a “private family” on McAllister Street after the honeymoon. Soon, however, the young couple moved back into the Baldwin Hotel after father and daughter formally reconciled. The little family limped along.

The evening of November 22, 1898 was a normal one in the hotel. Guests and locals took in a performance of Secret Service in the basement-level Baldwin Theatre. Some perhaps enjoyed a meal at a fashionable café across the street called The Louvre, which was counter-intuitively known for its German fare. Then, at 3:20 a.m., a fire started in the basement and shot upwards towards the roof. The San Francisco Call of November 23 reported, “In a very few minutes the firemen were at the scene…The ladders…placed with inconceivable rapidity against the side of the building. The shadowy figures of men mounted the ladders…while a thousand voices gave vent to tremendous cheers as one life was saved from the building.”1 The word tremendous was used repeatedly in this article, and much of the reporting was more…incendiary than factual. 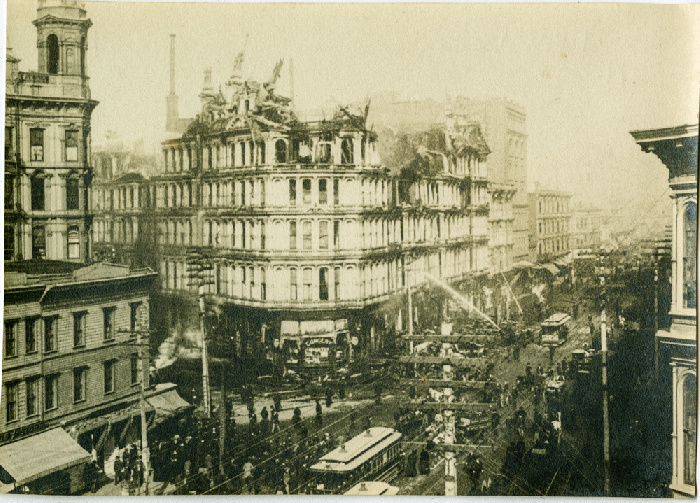 Fire-fighters hosing down the Baldwin Hotel at Powell and Market after the early morning fire on November 23, 1898. (wnp32.0283, Emiliano Echeverria Collection)

Meanwhile, the San Francisco Call reported, Lucky was “racing around like a madman,” asking for someone to retrieve something from his room. What could Lucky not live without? Insurance papers, perhaps? No…a set of gold mounted harnesses valued over $7,000—appropriate for the man who later founded the Santa Anita Racetrack. Many were injured and lost their lives in the fire, but many more escaped physically unharmed thanks to heroic efforts by the San Francisco Fire Department. Adjacent businesses only suffered severe smoke and water damage, although ground floor businesses reported total losses, citing insufficient insurance, and the hotel was gutted largely due to the fact that the city’s water supply couldn’t handle the work load in an eerie premonition of what was to come in April 1906. The day after the fire the Sacramento Daily Union reported “The Baldwin Hotel, for almost thirty years one of the principle landmarks of San Francisco, is no more.”2 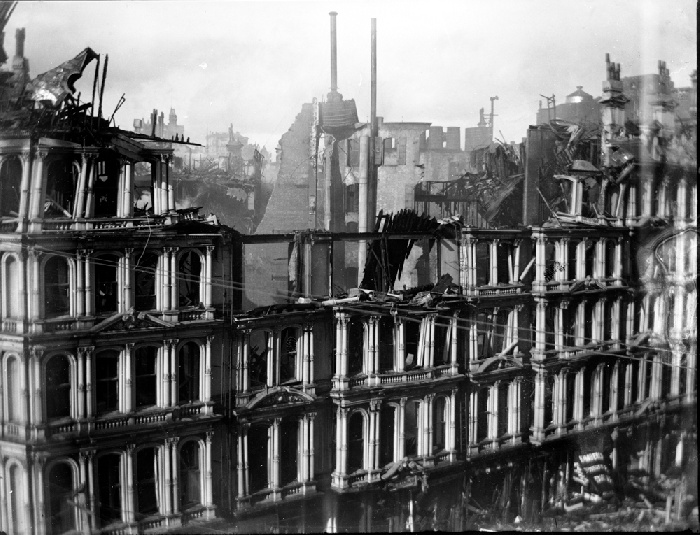 The Baldwin family escaped physically unscathed and left the city for greener pastures in Southern California. George, who had purchased several racehorses (perhaps to get closer to a disapproving father-in-law?), took his stable to the east coast in January of 1899, hoping to earn some quick cash. Sadly, he returned to annulment papers and Anita filed for divorce on the grounds of desertion in October of 1900. More accurately, she filed on the grounds of Hull McClaughry—a Democrat and Harvard law grad who gave her the vapors during George’s time on the Atlantic Coast. Lucky, a dyed-in-the-wool Republican, was no more amused by him than he was by cousin George. Asking Anita to do nothing hasty, Lucky left on a trip north looking to recoup his money in the gold fields of Alaska. Anita promptly married Hull in Carson City, Nevada on October 26, 1900; she certainly had a flair for elopement.

Things worked out okay, though…for Anita and her father. When Baldwin founded my hometown of Arcadia, California in 1903, Hull became a valuable resource for Lucky as one of the first men to be elected to the town’s Board of Trustees. Anita and her husband continued to live and flourish in the Bay Area as their family grew, while Lucky finally accomplished a lifelong goal: building the Santa Anita Racetrack in 1907. The San Francisco Call reported, “It matters not to him whether the venture proves to be a financial success or not. That is for others to see. It is sufficient that the track has been established—that after years of planning and repeated disappointments he has achieved the aim of his greatest ambition.”3 I spent most of my youth at this racetrack because my father worked there as a jockey’s agent from the 1980s until he retired due to illness in the early 2000s. This is where I spent hours listening to old-timers tell tall tales, which is probably why I’m now a historian. Who knows what I would have been without Lucky’s obsession with Kentucky thoroughbreds?

When Lucky died in March of 1909, he left Anita nearly $10 million and most of the San Gabriel Valley, including the Santa Anita ranch where the couple increasingly spent much of their time until Hull also got the boot in 1913. Anita alleged cruelty and testified at her divorce hearing that “she and her husband quarreled so often over the cost of living as a result of his economical ideas that her health became impaired.” She paid him $300,000 to get lost, then dropped $225,000 on a pearl necklace at a San Francisco jewelry store and built a 50-room mansion in Arcadia called Anoakia where she would live until her death in 1939. I drove by this mansion more times than I can count and I never knew its history. It’s funny the places you never think to think about. It became a private school for many years and then plans moved forward to demolish it and build luxury homes—a very common story in the San Gabriel Valley. Despite efforts to save it, they tore the whole thing down in 1999. Ironically, my dad’s jockey, Laffit Pincay, Jr., was one of the first residents to live at the comically-named Anoakia Estates.

Anita’s mansion and Lucky’s hotel may be no more, but their stories remind us that Northern California may have more common threads with Southern California than the regional feud would like to admit. History is funny that way. I also see many parallels between the grandiose life of Lucky and his spirited daughter to that of San Francisco mayor and plutocrat Adolph Sutro and his favorite daughter, Emma, and wonder if the two families ever crossed paths. Despite living much of their lives in Arcadia, both Lucky and Anita chose to spend eternity in the Bay Area and both are buried in a family crypt in Cypress Lawn Memorial Park in Colma. In fact, several of the Baldwin heirs preferred living in the Bay Area despite their origins in Pasadena, much like myself. I often say I’m a Californian by birth and trade, and this little research adventure has made that all the clearer to me. After all, who could have guessed that two little negatives could remind me what a lucky lady I am to be born in Baldwin’s shadow and then find purpose on Sutro’s west side? That is the power of History.