My grandmother and I would take the 21-Hayes bus downtown to shop at the Emporium in the early 1970s, and she would tell me how she used to go to Mid-Market and the Tenderloin to see movies, listen to music, and dance. This was difficult for me to grasp as a child—and not only because my grandmother did not look the flapper type. The theatres that still operated on Market Street showed adult films, and the once stately buildings in between housed shabby Army surplus outlets and knock-off camera stores.

In her younger days, my grandmother worked as a server for Fosters, a local chain of diners with a location on the northwest corner of Eddy and Jones Streets. Here is an advertisement for the Arcadia Dancing Pavilion on the opposite corner, back in the Tenderloin’s rollicking era of jazz clubs, burlesque shows, and dance halls: 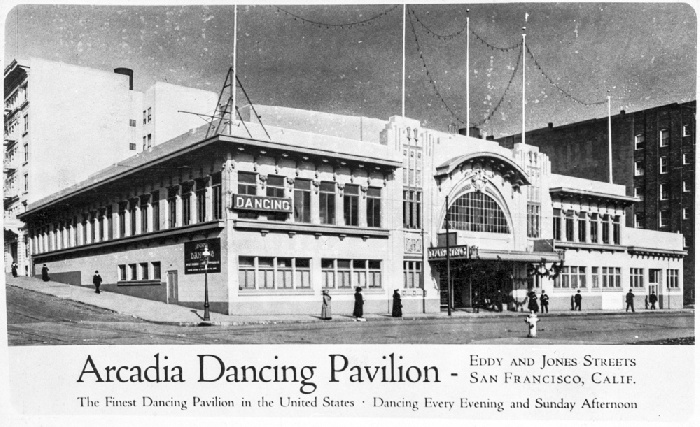 Advertisement card for Arcadia Dancing Pavilion at Eddy and Jones Streets, circa 1920. “The Finest Dancing Pavilion in the United States. Dancing Every Evening and Sunday Afternoon.” (wnp37.04316.jpg; Marilyn Blaisdell Collection, Courtesy of a private collector.)

Before the 1906 earthquake burned the block, this northeast corner was home to the Wigwam and Alhambra Theatres. (No relation to the landmark movie palace on Polk Street near Green, today home to a gym.) Some have speculated that elements of the burned-out theatre structure were preserved in the Arcadia Dancing Pavilion, which had a similar shape when it opened in 1915. Boxing matches, an ice skating rink, and bowling alleys all operated out of the Arcadia building through the twentieth century. Here’s a cable car passing in 1935, when the Arcadia was pushing skating as an attraction: 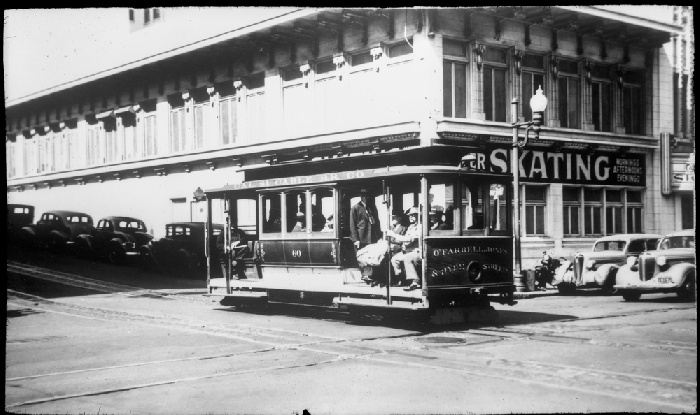 Jones Street Shuttle Cable Car #60 on O’Farrell, Jones and Hyde Line. View toward northeast corner of Eddy and Jones, circa 1935. (wnp14.1905.jpg; Courtesy of a private collector.)

Before the San Francisco Public Utilities Commission shut it down in 1954, this cable car ran just five blocks on Jones Street, shuttling passengers from O’Farrell Street (where another cable car line operated) to Market Street. Here’s the same Jones Street shuttle car and a 31-Balboa streetcar meeting in 1948 in front of the Arcadia building after a remodel: 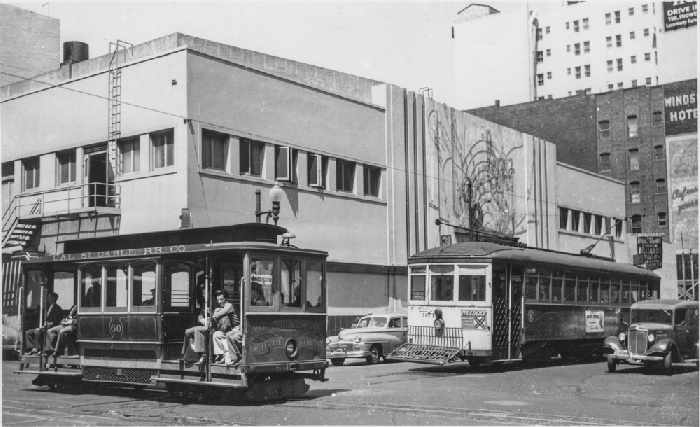 From 1942 to 1977, Downtown Bowl occupied the building as “the show place of Bay Area bowling.”1 Our friend Jack Tillmany remembers a beautiful and elaborate neon sign of pins flying out front. Big-name bowlers and a very loyal community of clubs and teams patronized Downtown Bowl until, in the words of San Francisco Examiner columnist Bill Mandel, “It went to terminal seed and was replaced by a bum-proof public park.”2

That would be Father Alfred E. Boeddeker Park, which opened in May 1985 after the city purchased and demolished the old Arcadia building. Named after the Franciscan priest who created and ran the famed St. Anthony’s Dining Room soup kitchen, Boeddeker Park was not considered the Arcadia of city parks over the next thirty years. To “cut down on low-life habitués,” the corner was enclosed with an uninviting high iron fence that made it seem more prison than park.3 While Tenderloin residents deserved and fought for a slice of open space in one of the most urban neighborhoods of the city, Boeddeker was dirty, dangerous, and rated as the worst park in San Francisco. The San Francisco Chronicle’s John King remembered, “Again and again the space was ‘reclaimed.’ Again and again it slid back.”4

Just as the city changed dramatically from my grandmother’s prime to my childhood, San Francisco has again remade itself just in my adulthood. Anyone with a ten-year tenure in the city will agree, as towers loom over South of Market, $30 cocktails are served in the Mission, and private jitney vans weave with Ubers and Lyfts through the Western Addition.

For a long time it felt the Tenderloin would stay the same, surrounded by wealth and upheaval, but more a victim than a beneficiary of the money pouring into town. While an extremely diverse neighborhood, it is still where the intractable and shameful sides of our modern society are most on public display, as those who live on the margins, who suffer from homelessness, drug addiction, mental and physical illness, and poverty, are crowded together, pushed out of gentrified neighborhoods, priced out of the new construction. It is also home to thousands of children.

Positive change has come in the last couple of years. In December 2014, Boeddeker Park was reclaimed yet again, redesigned with a determined and concerted effort by The Trust for Public Land, the city, and neighborhood residents. (Check out this video from the Trust for Public Land about the park’s redesign.)

This time it seems to be working. On the old corner where San Franciscans like my grandmother once came to dance and play, now senior citizens stretch, children run, and a little sunshine slips through the apartment towers.