In 1919, in the midst of a massive bond-fueled effort to improve city infrastructure and streets, the Department of Public Works prepared to take on the one block of Quesada Avenue running west from Railroad Avenue (now 3rd Street). The street had a jumble of Victorian cottages on either side, which, while humble, had a polished elegance the rough, weedy roadway lacked. 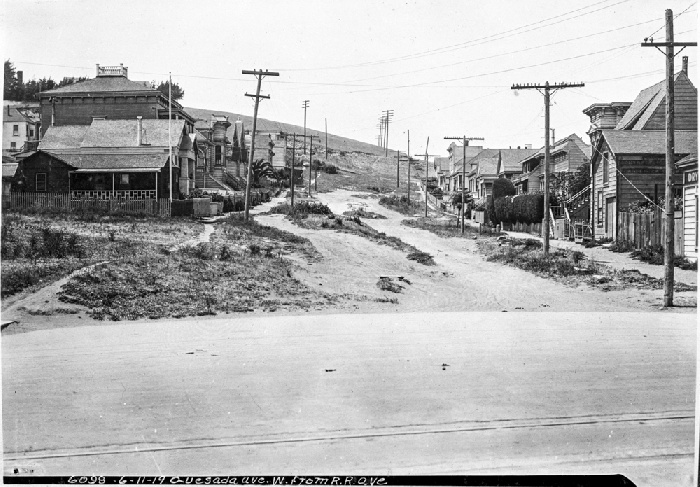 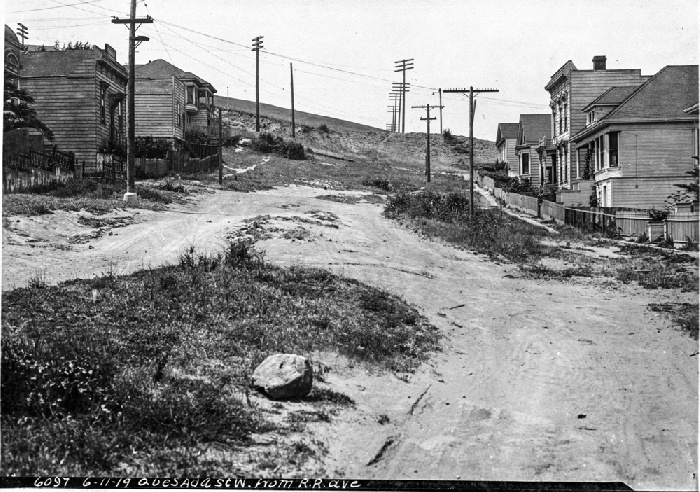 Many of these homes were built around 1903, when the street was named 17th Avenue South, petering out at the hillside where the Silver Terrace neighborhood stands today. Real estate brokers Lyon & Hoag offered lots on the block for just $350 then, appealing to the working men looking for housing near their jobs at the California Fireworks factory, the shipyards, and the meat, poultry, and tallow processing plants of “Butchertown.”

By November 1920, the residents of Quesada Avenue had a newly paved street with center median. On the west end, a concrete retaining wall made a dead-end of half the block, but had a staircase giving walkers access to the Mount St. Joseph Roman Catholic orphanage beyond. Soon after, the Quesada median was planted with Canary Island Date Palms, same as the better-known ones along Dolores Street in the Mission District. (Over the last twenty years, from the Embarcadero to Ocean Avenue, palms have been a popular choice for renewing streetscapes in the city, but they still rub many old-time San Franciscans the wrong way as “too L.A.”) 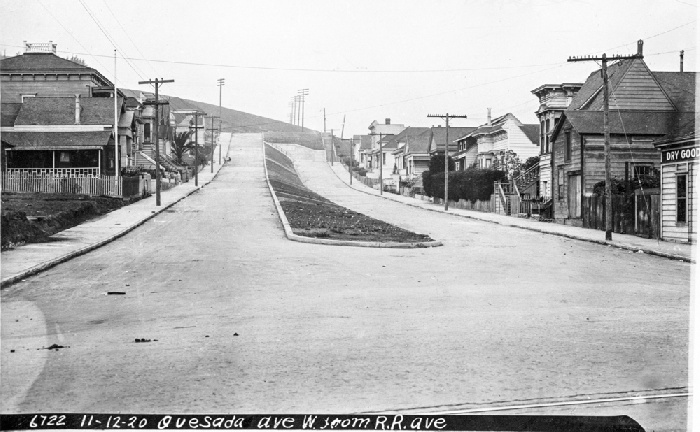 The palms and a good deal of the early cottages survived the twentieth century as the Bay View (now commonly spelled Bayview) District swelled in the 1920s and post World War II years. By the first decade of the twenty-first century, however, the street had become decidedly uninviting. Situated on busy 3rd Street, but not a thoroughfare to anywhere beyond the block, Quesada Avenue became a magnet for litter and a hangout for drug-users.

Resident Annette Smith described the median at the turn of the century in this great article by KALW reporter Jen Chien: “There was a lot of dead grass, weeds […] It had all kinds of debris: beer cans, liquor bottles, needles of where they were using drugs, condoms. Name it, it was out there.”

It was again time for a remaking of Quesada Avenue, but this time it wouldn’t be a city agency doing the work. Neighbors, led by Smith, Karl Paige, and Jeffrey Betcher began turning the ground between the old palm trees into gardens for roses, vegetables, and sunflowers. The Quesada Gardens Initiative was soon born, not only beautifying a block with gardens on the median, murals on the retaining wall, colorful tile on the concrete staircase, but broader community-building with newsletters, a blog, film nights, and art projects across the extended neighborhood. The Quesada Avenue project grew into a model of community building activism. The initiative’s inspiring website says it all: “Together, we are bringing back the days when all who live, work & play in Bayview Hunters Point greet each other by name.”

This is a reflection, a positive one, of the times we live in. In 1919-1920, with pavement and palms, the city improved what must have been a dusty-in-summer/muddy-in-winter road for the residents of Quesada Avenue. Today, neighbors are doing it for themselves, planting seeds that flower far beyond their front yard.