Eighty years ago this week, on July 14, 1938, the president of the United States swung through town in a motorcade. Tens of thousands stood along the route just to get a glimpse. The San Francisco Chronicle admitted that the man was popular:

“San Francisco tendered him as frenzied, as spontaneous, as uproarious a demonstration as it has given any men of the generation. Upwards of half a million persons lined the streets through which the presidential automobile caravan passed. They knew they were to hear no speeches, that the President would not even stop. Yet they came there and stood for hours…”1

President Franklin Roosevelt was doing a “look-see” of the nation in July 1938, stumping for Democratic candidates and struggling to keep his New Deal going. A new economic downturn, labor strikes, and his own strong-arm policies had Roosevelt facing defections within his party and real gains by Republicans across the country.

All those political details did not seem to be weighing on the minds of the people who came out, or perhaps they did, and this was their supportive response. 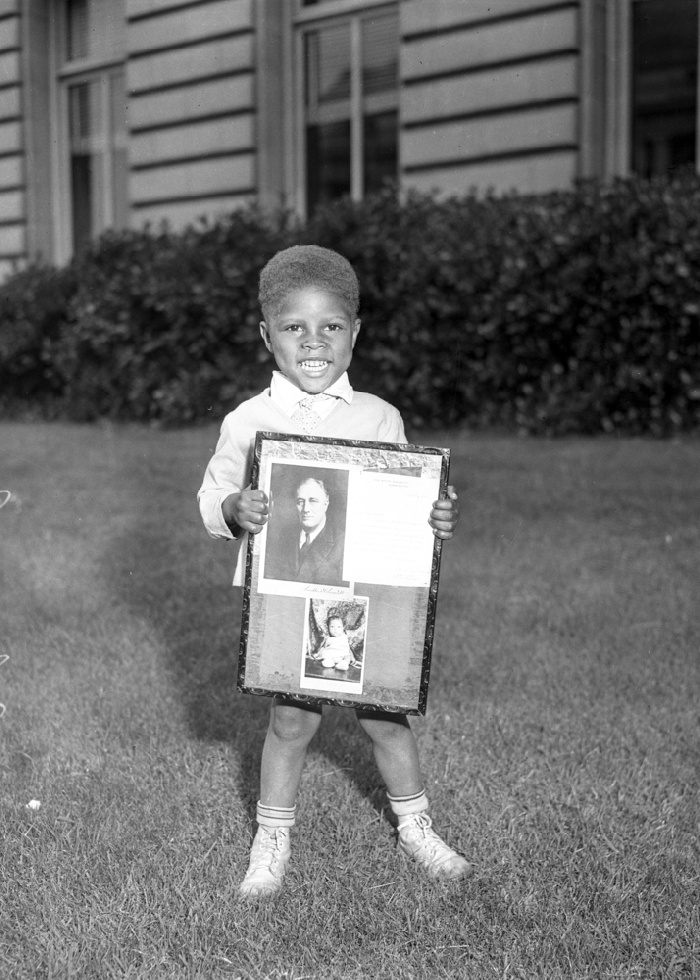 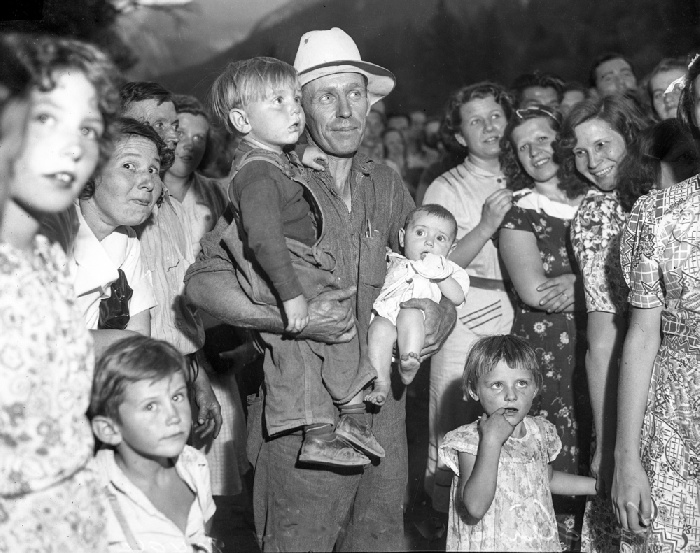 Families waiting to greet President Franklin Roosevelt on his drive through the Bay Area, July 14, 1938. (wnp14.11614.jpg; courtesy of a private collector.)

After his train stopped in Crockett at the Carquinez Strait in the morning, Roosevelt transferred to an open automobile for his tour of the Bay Area beginning with brief visits at Mare Island and the Marin Civic Center; then, into the city, speeding past landmarks familiar to us today, but newly made at the time. The Golden Gate Bridge, just a year old, was closed to other traffic for his arrival. Photographers and families found good seats to welcome the presidential motorcade’s emergence out of the fog to San Francisco. 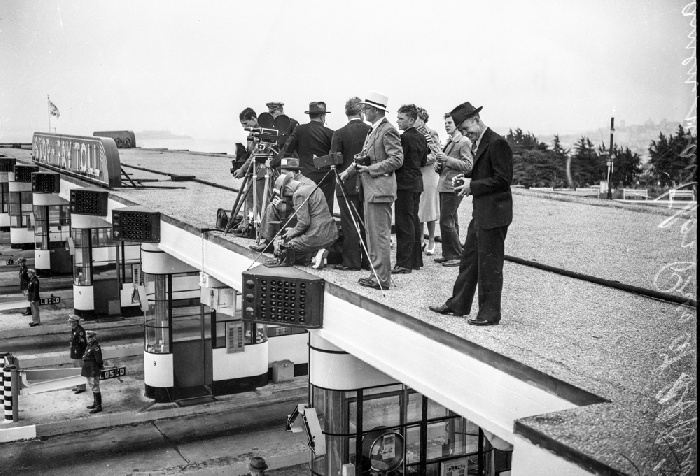 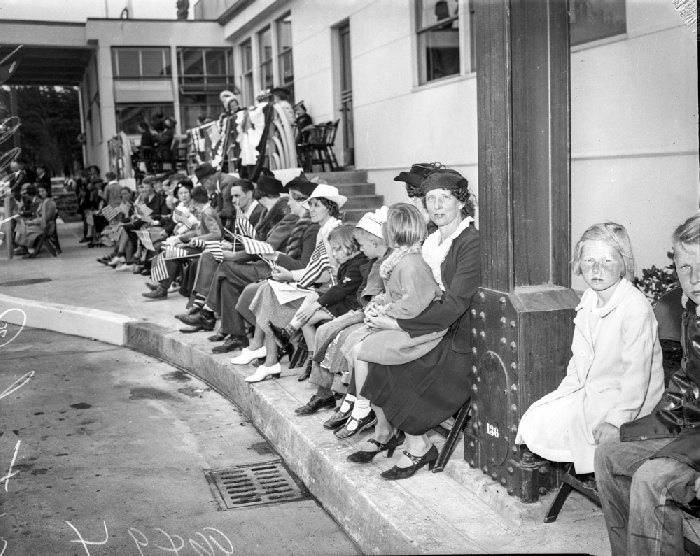 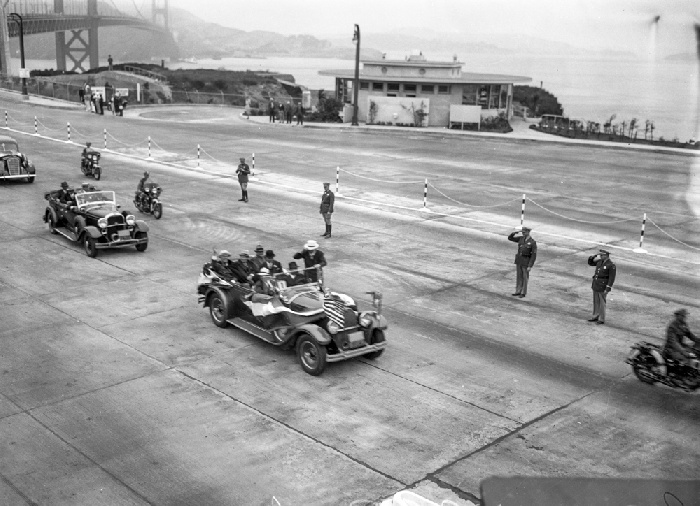 Demonstrating the perks of being president, the directors of the Golden Gate Bridge District graciously voted to waive FDR’s toll in crossing.

After a loop through the Civic Center, the line of cars, with Secret Service perched on running boards, took the Bay Bridge (opened two years earlier) to Treasure Island (just created for the Golden Gate International Exposition of 1939 and a planned airport), where a 1,000-person luncheon awaited Roosevelt.

After lunch and speeches, the president and his group boarded the USS Houston for a review of the United States Fleet assembled between Alameda and Hunter’s Point. Each battleship, cruiser, destroyer, submarine, and aircraft carrier offered the president a twenty-one-gun salute as the Houston wove through the armada. 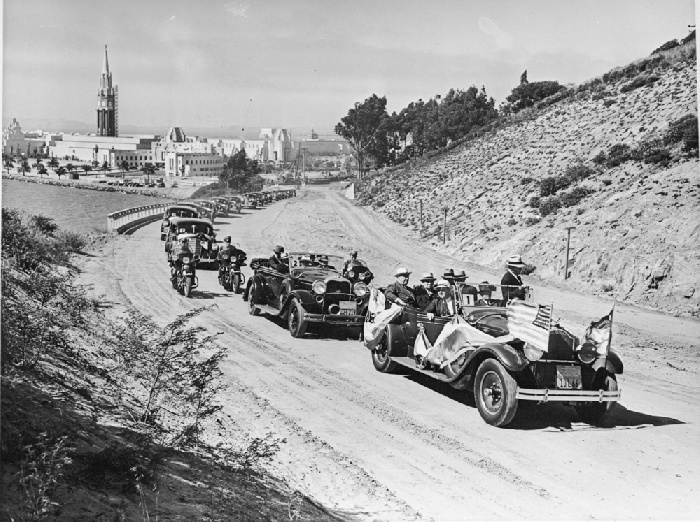 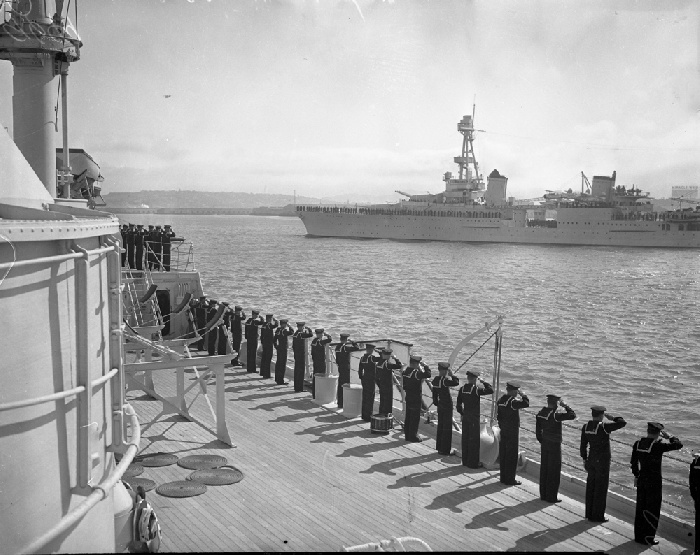 Then it was back on a train headed east to visit Yosemite. Roosevelt would later meet up with the USS Houston again in Southern California for a fishing trip in the Galapagos Islands and a return to Washington, D.C. via the Panama Canal.

We catch ourselves saying (more than we should), “It was a different time.” Make no doubt of it, politics was just as cutthroat, partisan, and acrimonious in 1938 as in 2018, but there was a public show of civility, at least at the highest levels.

The San Francisco Chronicle was no friend to Franklin Delano Roosevelt. A high compliment from the Chron at the time was that, while FDR was a dictator, he wasn’t as bad as Mussolini or Hitler; but columnist Royce Brier, writing of the visit, grudgingly admitted “Many opponents [of the president’s politics] will be taken by surprise when they find themselves cheering a little, along with the President’s most devoted admirers.”2 California’s Republican governor, Frank Merriam, rode in the automobile with the president and spoke at the luncheon. San Francisco mayor Angelo Rossi, another Republican, gushed FDR a hearty welcome from San Francisco. Perhaps these men would be dismayed at how public discourse is conducted today.

But the future is always hazy. During his own speech at the Treasure Island luncheon, Roosevelt said he looked forward to the Golden Gate International Exposition. He promised “I shall come back to see it next year confident that in 1939 there will be peace in all the world.”

See all images from the FDR visit on OpenSFHistory