We depend on individual donations to survive. Please Donate any amount to help keep this non-profit effort going.
by Nicole Meldahl

San Francisco has a unique ability to create characters. This is a city that revels in its lore, and its people are often the makers of their own myths. What we do as historians is try to sort fact and fiction, but sometimes the fictions people create for themselves are as true as any truth. The line between what’s real and what’s remembered becomes irrelevant as the repetition of telling makes information more “factual” the more frequently it is told. 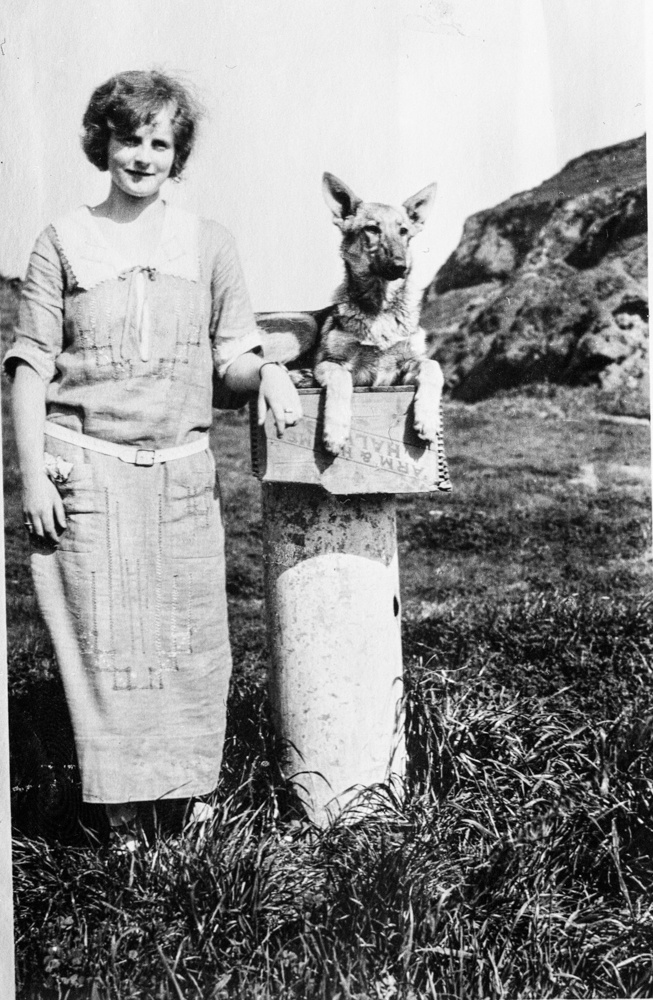 I was first introduced to Norma after we digitized her wonderfully vibrant photo album. Here was a San Francisco family filled with life: group portraits outside of the Ball home in Corona Heights; Norma with pets, and friends, and her beau (who became her husband); photos of the Norwood family in the Richmond and Sunset; picnics at Ocean Beach, fun at Fleishhacker Pool, and games at Kezar Stadium tempered by a photo of a man (possibly her father) wearing a influenza-fighting facemask during the first World War. And most of these gems are captioned—an archivist-historian’s dream! Then I discovered that Norma Ball Norwood’s truth is truly one to behold. 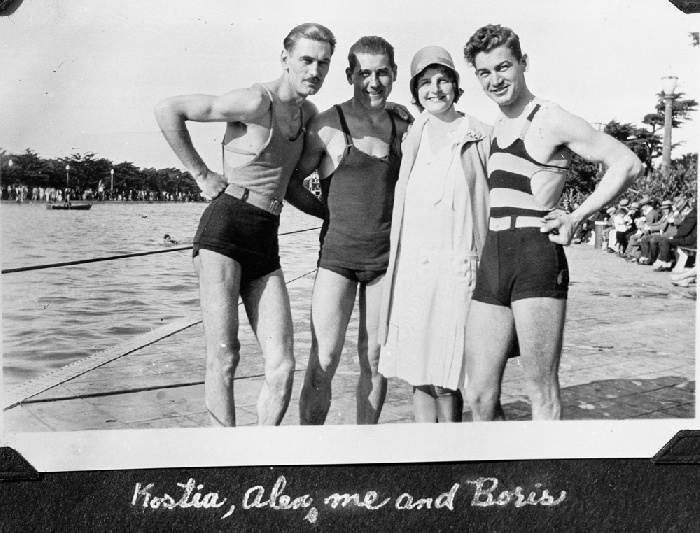 Norma Ball Norwood left us with one of the most San Franciscan obituaries I have ever read. For starters, it opens with a Herb Caen quote about the 1906 earthquake and fire. This earth-shattering event in local history burned the home of her parents, Christina (Maschmann) and Lester Ball, to the ground. They sought refuge in tents like so many other San Franciscans, and it was here that Norma’s tale begins. She remembered, “My father said it was cold in the tent, and they had to snuggle to keep warm. And what happens when you snuggle? You have a baby.” That’s right: Norma Ball Norwood was conceived in an earthquake refugee tent in Golden Gate Park.

As the obituary continues, the tales feel increasingly taller. Norma’s mother, a native of Germany, named her daughter after a favorite cow. The family lived on States Street near Levant, and Norma accidentally started a fire that burned all the grass off of Rocky Hill (now known as Corona Heights). Her parents owned a saloon, and Norma, who took dancing lessons from the age of six until she graduated from grammar school, would pirouette and dance acrobatically as sailors and longshoremen threw pennies and nickels in praise at the stage; she often called herself a saloon dancer with pride. When she wasn’t entertaining bar patrons, she was under the watchful eyes of prostitutes that worked beneath the saloon.

Here is where the historian in me took pause, wanting to verify these truths, and I did find some. A June 1906 article that ran in the San Francisco Chronicle and the Los Angeles Times refers to Lester Ball as a “San Francisco saloon man” arrested for fraud in San Jose. The Balls did own saloons all over the city—the Hamburg Saloon at 416 Kearny (destroyed in 1906), others at 807 Howard street, 106 Oak Street, 791 Folsom Street, and 421 Drumm Street, and more. And while I can’t prove that prostitutes babysat her, Lester Ball’s 421 Drumm Street saloon was located near a Scandinavian Sailor’s Home, which gives credence to her Shirley Temple-tale. 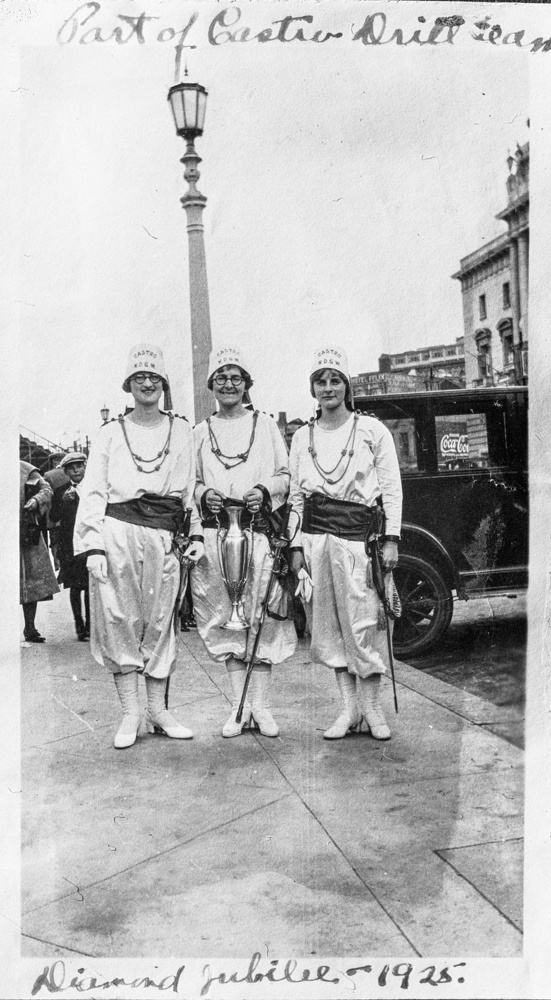 Apparently Lester Ball the San Francisco saloon man traded up, and, according to a June 1917 advertisement in the San Francisco Chronicle, began selling saloons as well as delicatessens and restaurants with the Eureka Investment Company. He was an enterprising businessman but still an “old-fashioned dad” that didn’t believe his daughter needed high school, sending Norma to business school instead. Wanting your daughter to have a practical education seems more avant-garde than old fashioned to me. Regardless, it paid off. Norma began working as a legal secretary at the age of 14, later serving as president of the San Francisco Legal Association in 1964—a fact we were able to verify. She retired at the age of 84 only because she outlived all the attorneys for which she worked. That’s what her obituary says.

As she aged, she looked more and more like her mother. Norma married Jack Norwood and started a family, moving to a Sunset special on the west side with their son, Robert. Her brother, Stanley, also settled in the Outside Lands with his wife, Doris, and their daughters, Claire and Elinore, and the 1930s and 1940s show their kids living a more modern childhood than the bucolic Ball upbringing in Corona Heights. Norma would live independently on Judah Street until her death in 2007 (just two months shy of 100 years old), and in that time she became a 9th and Irving regular. Norma was asked about the secret to her longevity in 2005, and her response was priceless: “I have a drink every day… What’s the other thing? I say sex.” 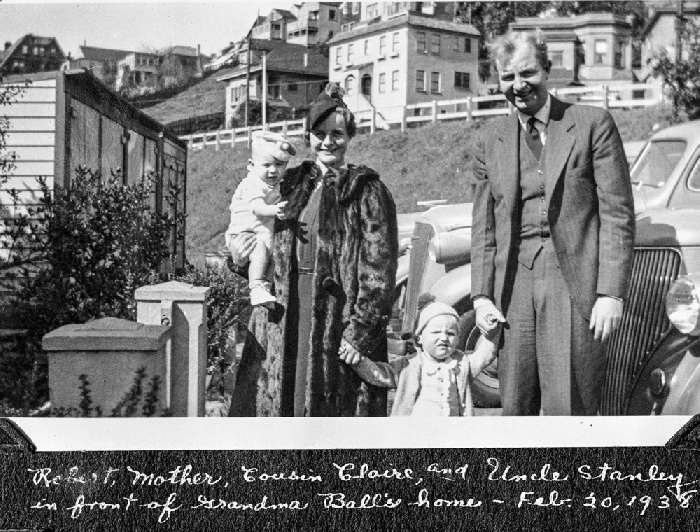 In 2006, as the city celebrated the 100th anniversary of the earthquake and fire, Gavin Newsom asked Norma, an honorary “earthquake baby,” how she felt. “Cold,” she said, “But I’ve got Gavin Newsom to warm me up.” If you look at photos from the event, you’ll see Norma elegantly composed in an electric blue hat and Gavin Newsom beaming with laughter. “Did they take good care of you?” She replied, “Can’t you tell?!”1

History work is tricky because the memories we get to keep are not equal to those we lose. Was Norma Norwood’s obituary 100% factual? Probably not. But San Francisco has always been a place where you can be exactly what you want, and Norma’s legacy on OpenSFHistory and in print speaks to the duality of truth and the largess of a city that accommodates all kinds of people. Ultimately, we are each our own Creator and what we say about ourselves, how we explain the truth that is and the truth we want to be, is just as important as the historical record.

With this in mind, perhaps the San Franciscans are the ones that give this city character and not the other way around. Perhaps, it’s ok for history to be a marginally inflated story…as long as we acknowledge the difference between what was and what we wanted to be. I want to be more like Norma Norwood.

See all images from the Norma Ball Norwood Collection on OpenSFHistory