We have our share of groundbreaking photos in the OpenSFHistory collection, that is, literally, groundbreaking: politicians and VIPs plying spades to dedicate the start of work on new buildings, bridges, hospitals, roadways, playgrounds, expositions, or fairs.

It’s a tradition with remarkable staying power. Each year the city seems to have at least two or three photo opportunities for public figures and CEOs to play dress up as blue-collar folk. Hard hats are askew; silver or gold-washed shovels are handled. Here’s a typical one from earlier this year taken by San Francisco Chronicle photographer Santiago Mejia to dedicate a new hotel in Mission Bay:

Sometimes during groundbreakings the first spadeful of earth is solemnly saved in a special container such as a silver casket or oaken chest. Here is President Taft tossing some dirt into a strongbox at the Polo Fields in Golden Gate Park in preparation for the 1915 Panama Pacific International Exposition. This was a seriously lost groundbreaking, as the PPIE didn’t end up in Golden Gate Park, but today’s Marina District instead. 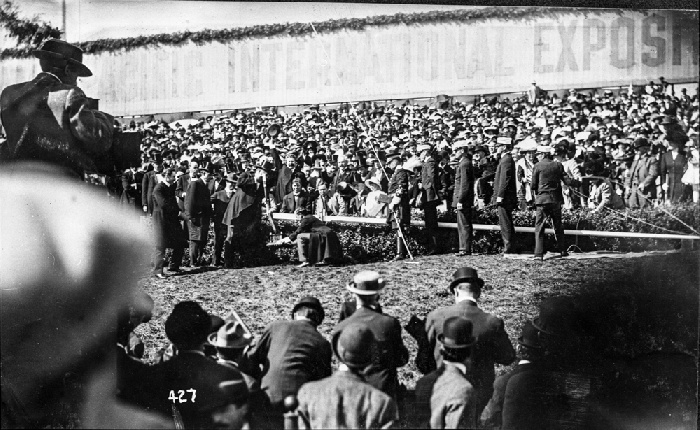 I often wonder what happens to these commemorative chests of sand and soil. The silver box used for the dedication of the 1894 Midwinter Fair in Golden Gate Park was auctioned off on the spot—with some “valuable coins” tossed in to help bidding. (More on this event next week.) I suspect the old de Young Museum ended up as a repository of many sundry dedication tools and receptacles.

Another misplaced groundbreaking: here’s Mayor Rossi shoveling on Crissy Field, a good mile from where the Golden Gate Bridge would arise, but a convenient space for the pomp and circumstance to celebrate what would become San Francisco’s most iconic structure. 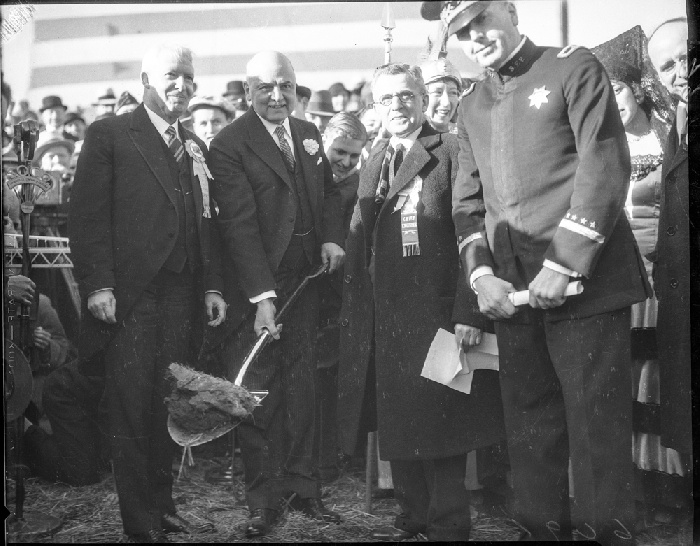 My favorites are the ones that have some fun with the tradition. In 1927, longtime parks superintendent John McLaren dedicated the park that bears his name by getting hitched up to a plow: 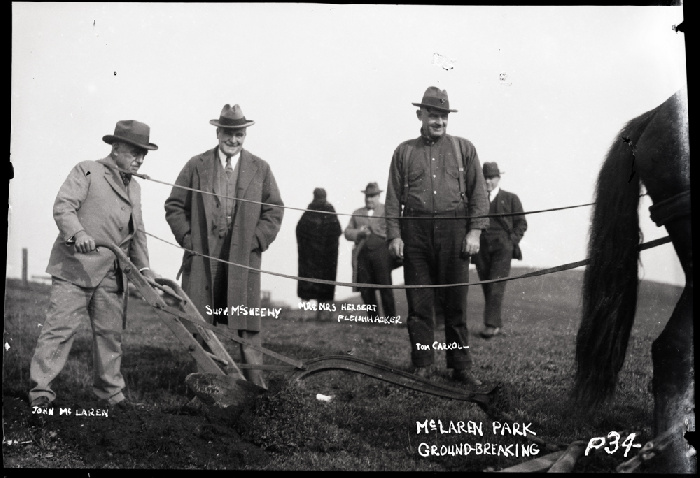 Ninety years ago this week, Mayor James Rolph, who was a true natural for ceremonial duties, upped the groundbreaking ante of dressing in workingman drag. The occasion was the onset of construction for the six-million-dollar War Memorial complex that still stands across from City Hall between McAllister Street, Grove Street, Van Ness Avenue, and Franklin Street. This was a second take at the groundbreaking for the arts and opera memorial to those who gave their lives in service during World War I. On Armistice Day, November 11, 1926, capitalist William H. Crocker used a silver hand shovel to save a clump of dirt in a copper box: but work couldn’t truly begin until a four-million-dollar bond issue was passed in 1927. With the actual start of construction, a new ceremony was deemed necessary.

Rolph, the mayor who enjoyed dressing as a motorman when opening streetcar lines, a teamster for a last horsecar run, or a pickaxe-bearing laborer for a tunnel-digging milestone, changed into overalls and a worker’s cap after his dedicatory speech, and instead of a gold spade, operated a large steam shovel to break ground. 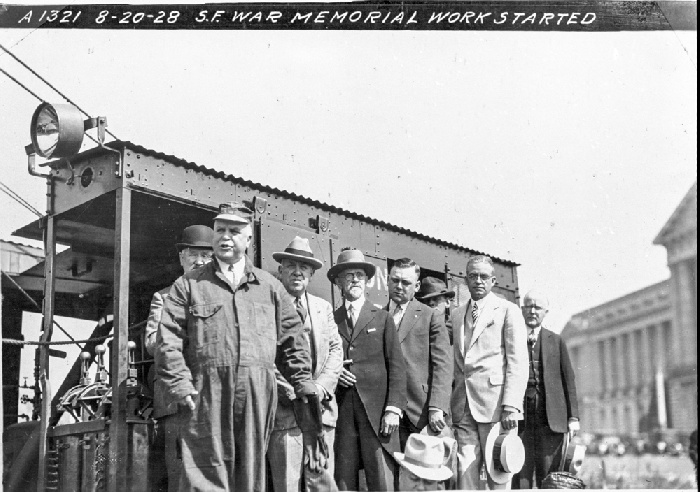 Mayor James Rolph, dressed as an engineer, stands in front of a steam shovel which he operated at the ceremony on August 20, 1928. Lewis F. Monteagle of the Musical Association of San Francisco at left behind him. Second from right is Allen W. Widenham of the War Memorial Committee. (wnp36.03698.jpg; Horace Chaffee photograph, Department of Public Works book 42, image A1321; copy courtesy of a private collector.)

Perhaps the outfit didn’t make the impression he desired at what should have been a solemn ceremony, because that November, when another steam shovel was used for the groundbreaking of the Bernal Cut roadway, Rolph stayed in a suit and even claimed he didn’t know how the shovel worked. 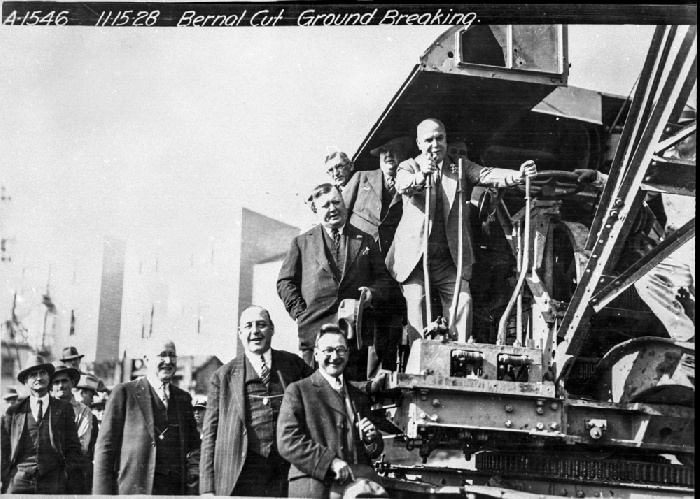 Mayor James Rolph posing at levers for the groundbreaking of work at San Jose Avenue and Rousseau Street on November 15, 1928. Fred Meyer of the Department of Public Works, Supervisors Gallagher, Suhr, and Todd. Felix Kahn of the construction company with cigar. (wnp36.03738.jpg; Horace Chaffee photograph, Department of Public Works book 43, image A1546; copy courtesy of a private collector.)