OpenSFHistory has recently posted numerous photographs of the Pacific Telephone and Telegraph Company’s office buildings and switching stations. There were many of them because during the 19th century and the first half (or longer) of the 20th century telephone technology was such as to require buildings in many parts of the city. This is the first of a series of articles intended to make sense of it all for anyone interested in these buildings. I probably won’t be trying to explain how switching stations worked or how the operators who staffed them did their jobs; that’s all beyond me. Because I’m interested in the architecture, the focus of each article will be the engineers and architects who designed these buildings: Albert J. Steiss, A. A. Cantin, E. V. Cobby, and Bliss and Faville (plus a brief but spectacular appearance by Miller and Pflueger). Besides profiling these designers, this format will put the history into roughly chronological order. I hope readers find these articles of interest.

Albert J. Steiss (1867-1909) was born in Pennsylvania and began working as a chain man for the Pennsylvania Railroad. He worked his way up, becoming the railroad’s assistant chief engineer for its lines in the far western part of the state. He next went to work for the Denver and Rio Grande Railroad, which ran from Denver over the Rocky Mountains to Salt Lake City. It was the highest-altitude major railroad in the country, and its motto was “Through the Rockies, not around them.” He caught typhoid fever there, and this caused heart trouble that remained with him for the rest of his life and was thought to ultimately cause his death.

In 1891 he moved to San Francisco to become a draftsman for the Pacific Telephone and Telegraph Company, the city’s dominant phone company; and became its engineer in 1896. (PT&T was reorganized as the Pacific States Telephone and Telegraph Company in 1900, and became known as Pacific Telephone and Telegraph again in 1907. It managed the west coast operations of the national AT&T, or Bell system.) After a decade with the company Steiss was described as Pacific States’ “engineer in charge of all construction, lines, and buildings,” not only in San Francisco, but apparently in Portland, Seattle, and Los Angeles as well. He was considered to possess “the highest order of ability.” In 1901, when Pacific States’ president, John I. Sabin, left to become the president of the Chicago Telephone Company, he took Steiss with him. Steiss remained in Chicago for two years, then returned to Pacific States T&T in 1903. This time it was not as a designer or engineer, but as the company’s assistant general manager.

It appears that Steiss was in charge of the design of the phone company’s San Francisco offices and switching exchanges during 1891-1901. Whether he designed all of the decorative details of these buildings or left that chore to a junior draftsman is unknown, but he probably supervised the entire work. The first building that can be (cautiously) attributed to him is PT&T’s West Office, at 2001 Steiner Street. It was built in 1891, the same year Steiss came to the company. At only one story in height, its several large Romanesque arches seemed unnecessarily powerful; the roofline was only a few inches above the apex of each arch and so they didn’t have to hold up much. It was visually arresting, however. 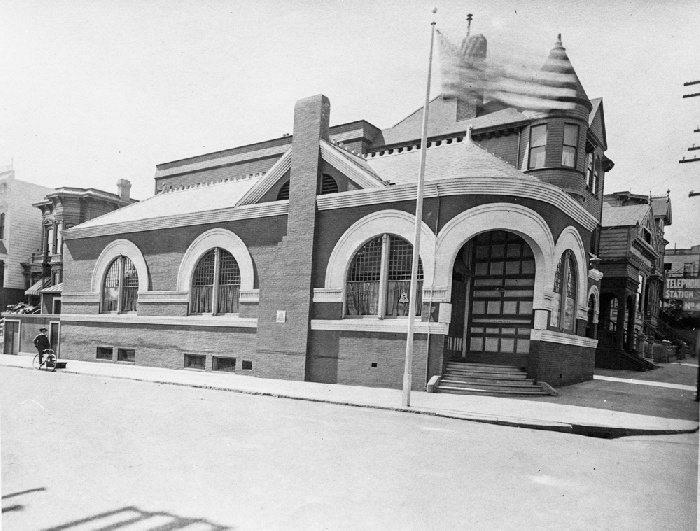 The company’s Mission Office at 2139 Mission Street (1897) was a blend of Romanesque and Classical Revival and was more delicately ornamented. Here, three arches spanned the width of the facade; above was an expanse of brick spandrels and an entablature, most likely of terra cotta. The Park Exchange, still standing at 871 Page Street (1899), is Spanish Colonial Revival in style, but the detailing in and around the column caps is not pure Spanish; it is unconventional, inventive, and pretty. This is the oldest building in San Francisco built for a telephone company. 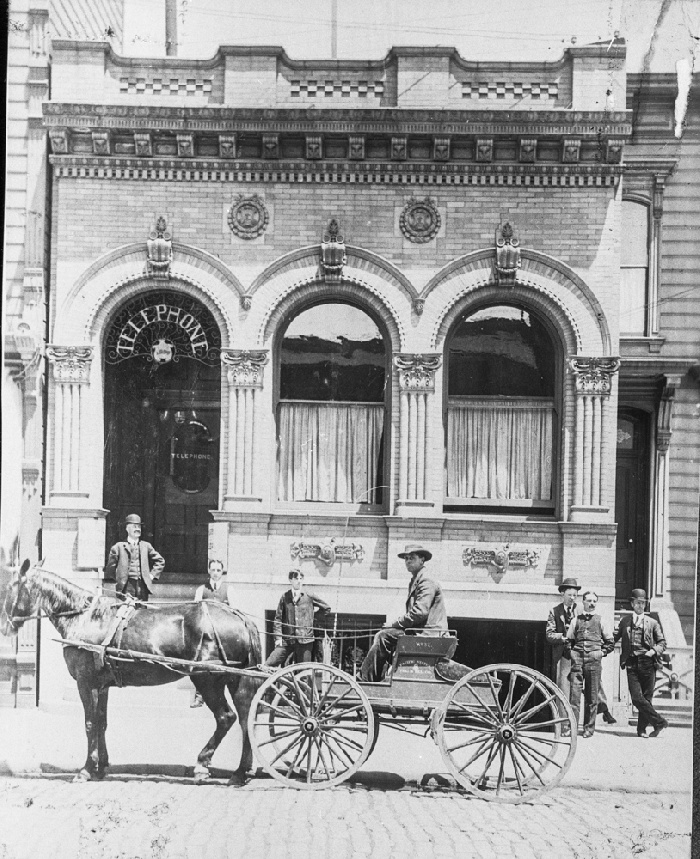 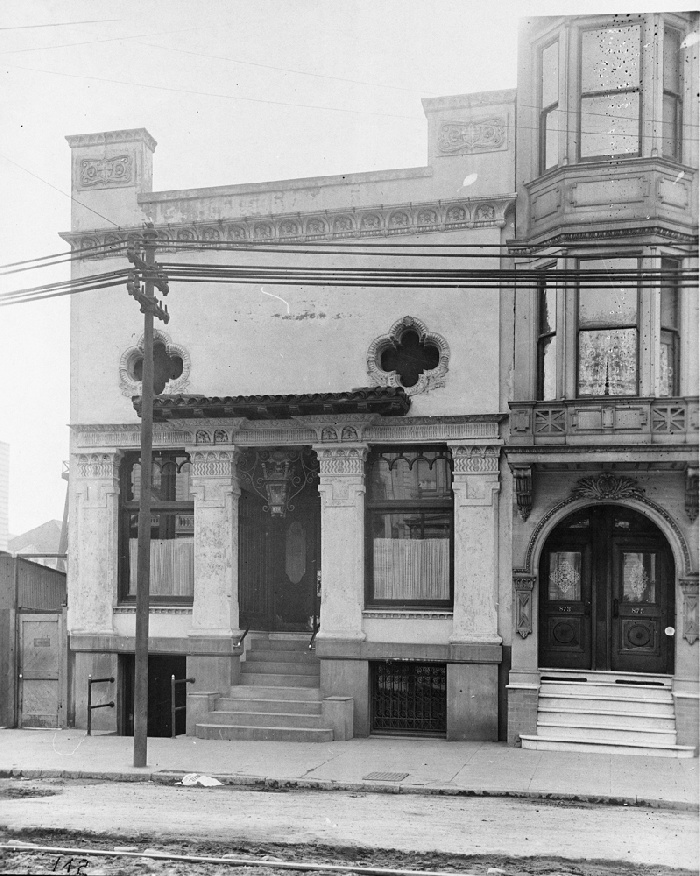 Although Steiss must have designed the structural aspects of these buildings, it is possible that their facades were designed by PT&T’s new draftsman, Alexander A. Cantin, who joined the company in 1897 or early 1898. This is not certain; they are a bit fussy by comparison with the stately Classical Revival buildings that Cantin designed for PT&T a few years later. It is known that PT&T also had other draftsmen besides Cantin at the time. Nevertheless, Cantin is a prime candidate as the author of their fronts. He certainly emerged as PT&T’s main designer soon after these were built.

At the turn of the century PT&T purchased a large lot along New Montgomery Street, from Minna to Natoma, where it would eventually, in the 1920s, build its famous sky-scraping headquarters. Here, in 1901, PT&T commenced the planning of a complex of three buildings that would include their office headquarters along New Montgomery, a two-story factory, woodworking shop, and warehouse at 141 Minna, and a five story showroom, warehouse, and factory behind it, at 147-151 Minna. For these, Steiss was the engineer and Cantin was the architect. All three of them stretched the full 160 feet from Minna to Natoma. The two-story building was built first, and it is the only one for which a photograph exists. Because it was to be mostly hidden from view by the other two buildings it was restrained in style, with ornament limited to the rusticated entrance, a profiled cornice, and Mission Revival parapets. Despite the restraint, it nevertheless had a certain power. Of course, all three had but a short existence, for they were destroyed in the earthquake and fire of 1906. 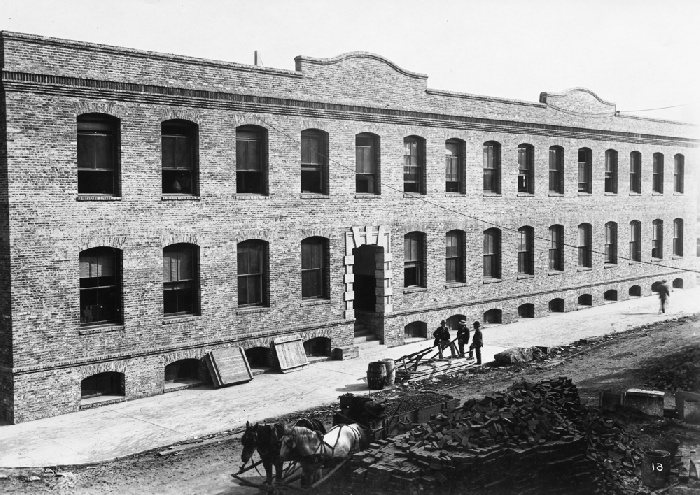 When Steiss returned to Pacific States T&T from Chicago in 1903, he did only administrative work, and the design of the company’s next round of buildings was left to Cantin. (These will be discussed in a forthcoming “A Closer Look.”) Steiss left the company in about 1905 or 1906, believing it to be mismanaged, and because he was offended when he was not made the manager, as he felt he had been promised. In the city’s graft trials of 1906-1907, he testified against the company’s vice-president, Louis Glass, who was convicted. Steiss died two years later at the baths at Nauheim, Germany, where he sought relief from his heart trouble.

The author would like to thank architectural historian Gary A. Goss for his insights regarding A. A. Cantin.