With another voting day upon us, my thoughts turn to my most direct experience with politics, when I attended the 1984 Democratic National Convention at the Moscone Center here in San Francisco. I was there as reporter/producer for a radio network and quickly learned that a convention was, by then, largely a four-day press conference for the party and a chance for some party up-and-comers to make a presence on a national stage. It was nonetheless a terrific show and one that San Francisco had helped stage for both parties several times.

On one of my recent digs through our OpenSFHistory image collection I found a number of San Francisco convention-related images. The first national convention to be held in San Francisco was the Democrats in June and July 1920 at the Civic Auditorium (now Bill Graham Civic Center). This was the first national convention held on the West Coast by either party. There was a parade down Market Street by state delegates to the Civic Auditorium. The key issue was whether to adopt a “wet” or “dry” plank, i.e., whether to favor or oppose continuing Prohibition. The Democrats nominated Ohio Governor James Cox as their presidential nominee after 44 ballots, but he lost to Ohio Senator Warren Harding in the general election. 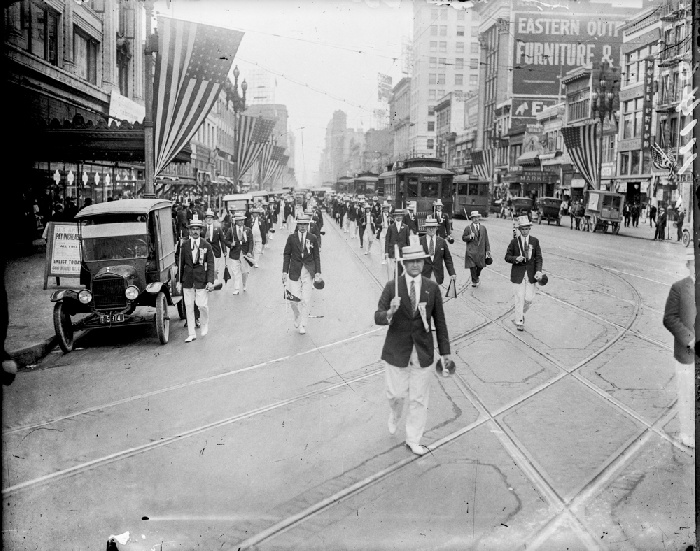 The Republicans came to San Francisco for their national convention on August 20-23, 1956, likely to take advantage of the rising popularity of Vice President Richard Nixon, a California native. There were no party challengers to President Dwight Eisenhower, but there were concerns about his health after he suffered a heart attack the prior year. Perhaps to quell those concerns, Eisenhower stood up in a convertible automobile to wave to well-wishers who lined his motorcade route up Geneva Avenue to the Cow Palace for the convention. The Eisenhower/Nixon ticket soundly defeated the Democrats in November, though the Republicans fared poorly in other national races. 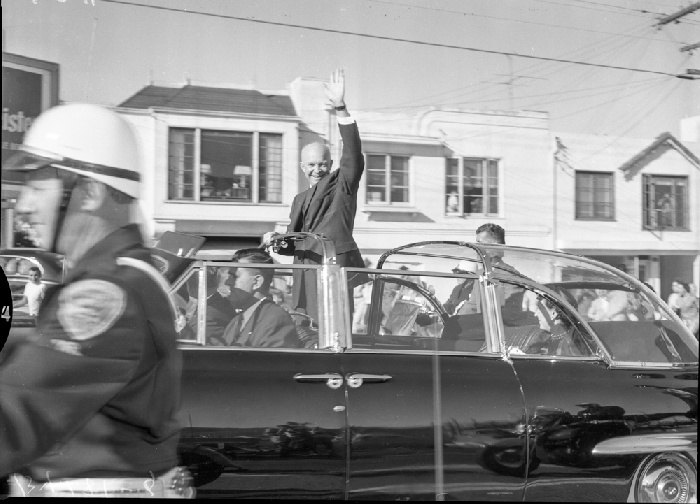 The Republicans returned to the Cow Palace on July 13-16, 1964. Without Nixon on the ticket to help carry California as the Republicans had done in the previous three presidential elections, the GOP was no doubt looking for an edge in holding California in the general election. Arizona Senator Barry Goldwater had clinched the nomination before the convention, though a platform fight at the convention between liberal Nelson Rockefeller Republicans and conservative Goldwater Republicans ensued. The Goldwater delegates largely prevailed. However, the idea of coming to San Francisco in the hopes of securing local votes in the general election may have been misguided then, as the city was in throes of civil rights and pro-marijuana marches and rallies that year. The Lyndon Johnson-led Democrats ended up trouncing Goldwater in the November 1964 election, both in California and the country at large.

This brings us to the July 16-19, 1984 Democratic National Convention at the Moscone Center that I attended. The 1984 Democratic race was a hard fought one featuring Colorado Senator Gary Hart, the Reverend Jesse Jackson, and former Vice President Walter Mondale. Though Mondale prevailed in the end, both Hart and Jackson gave well-received speeches at the convention. This San Francisco convention featured two significant female firsts and one significant LGBTQ first. New York Representative Geraldine Ferraro became the first female vice president nominee of a major party and Kentucky Governor Martha Collins was the first woman to chair a major party’s convention. In his speech, Jackson described the USA as a quilt with places for numerous types of people, specifically mentioning lesbians and gays, the first such mention in any national convention address. Mondale and Ferraro would go on to lose the general election to sitting president Ronald Reagan in one of the biggest electoral landslides ever.

It is now 34 years since the last national convention in San Francisco and it’s unknown if and when one will return here. Political conventions have become less important as party officials no longer need to gather to establish their platforms and determine winners. Consequently, the media provides less coverage of the conventions today. We may never again experience the types of conventions that we did in San Francisco in 1920, 1956, 1964, and 1984.