The hulking building on the southeast corner of 9th Avenue and Clement Street in the Richmond District has a Walgreens drug store occupying the ground floor and fourteen condominiums above. These are mundane if functional uses, but details on the facade—including the relief of a lyre high on the pediment—hint of a more dramatic history.

One hundred years ago this week, on November 22, 1918, the Coliseum Theatre opened to the public with a Mary Pickford motion picture, Johanna Enlists. First night had been delayed because of concerns of contagion during the great influenza pandemic, which peaked in late October. World War I had ended just eleven days before and all receipts from the evening were donated to the Red Cross. With all the tumult in the city and the world, the diversion of a new movie house for the Richmond District drew a big crowd. 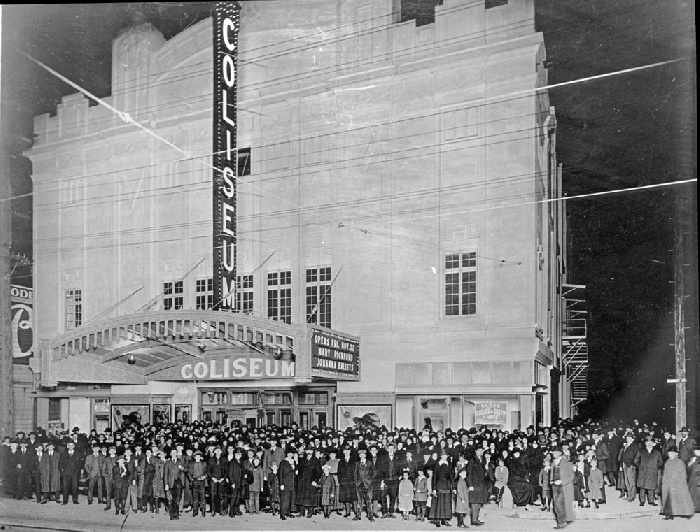 With 2,200 seats, the Coliseum’s capacity exceeded some of the big theatres downtown and reflected the popularity and importance of movies in America at the time. As late as the 1980s, Richmond District residents had five different theatres from which to choose for a night’s entertainment. In addition to the Coliseum Theatre, the Bridge, Coronet, Alexandria, Balboa, and 4 Star showed everything from foreign films to major blockbusters.

The Coliseum was made into a “talkie” with the introduction of sound in 1929. Movie theatres always tried to appear modern and current, and most underwent frequent renovations. In 1931, the Coliseum received a lush Art Deco remodel with geometric designs painted throughout its interior and the theatre ceiling stenciled with a vibrant jungle of palm fronds. A decade later, a cleaner, streamlined look was the fashion and out went the zig-zags and tropical forest.

The Coliseum closed for a few years in the early 1950s, losing business to the Alexandria and the new Coronet Theatre on Geary Boulevard. When the Coronet began hosting long-run shows such as Oklahoma! (44 weeks) and Around the World in 80 Days (96 weeks—almost two years!), the opportunity arose for the Coliseum to reopen showing second-run films. Another modernizing remodel brought a new vertical sign with three simple letters: “COL.” The theatre’s most successful period came in 1975, when it had the exclusive San Francisco showing of Jaws. The film ran for six months, with lines around the block. (Nine years old, I begged my mother to let me go. To her credit, I suppose, she refused.)

On October 17, 1989, the Bay Area was abuzz with the San Francisco Giants and Oakland A’s meeting for Game 3 of the World Series. The Coliseum appropriately, although perhaps over-optimistically, was playing the baseball fantasy film, Field of Dreams. (What baseball fan would see a movie over the World Series?) The Loma Prieta earthquake struck forty-one minutes before the first scheduled showing of the day, and the 71-year-old movie house never screened another film. The Coliseum’s operators, United Artists, decided the expense to repair earthquake damage wasn’t worth the declining ticket revenues.

The Coliseum sat boarded up and graffiti-blighted for 11 years. (Not as long as the Alexandria Theatre building on Geary and 18th Avenue has been closed:14 years and counting.) Finally, the building was sympathetically redeveloped with much of its exterior details, including that lyre, preserved.

Of the handful of neighborhood theatres left in San Francisco today the Richmond District has two, the Balboa and the 4 Star, although the latter has been for sale recently and may not be with us much longer.

Thanks to movie historian and friend Jack Tillmany for images and insight. Read more about the Coliseum and Richmond District theatres on our sister site, OutsideLands.org, and on Bill Coulter’s excellent blog, San Francisco Theatres.