While processing photographs from the collection of Martin Behrman, now in the archives of the Golden Gate National Recreation Area, I was struck by two Mission District scenes with particularly descriptive captions on the image. 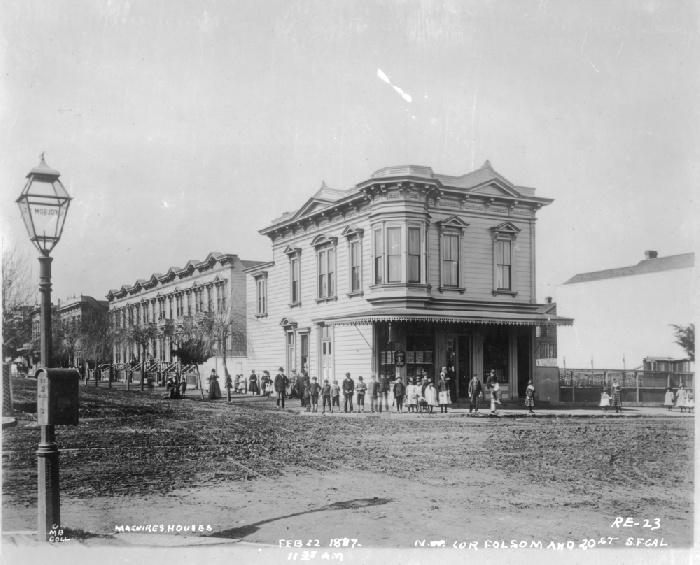 We spend a lot of time trying to pin down not only locations of images in the OpenSFHistory collection, but also dates. We often have to make vague guesses like “1880s.” Rarely do we get the exact date, much less the time of day: 11:35 a.m.! Here is the west corner of the same block on the same day: 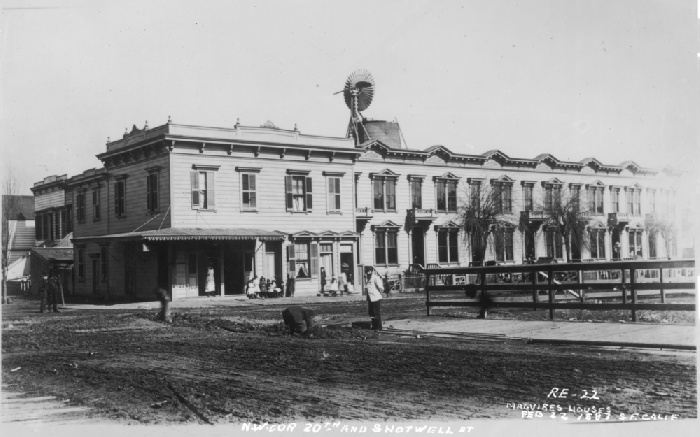 Both photographs document the northern block face of 20th Street between Shotwell and Folsom Streets, and the notations make special mention of the residential flats— “Maguire’s houses”—in the middle of the block with the undulating roofline. A grocer and a butcher, respectively, occupy the corner buildings. Groups of neighborhood children pose. A line of street trees is visible. In the first photo there’s a mailbox on a lamp post. The scene projects a refined urban neighborhood, while the water tower visible in the background of the second photograph gives a clue that the infrastructure of city life is relatively recent. At the time these images were taken the block east was mostly open land with greenhouses and a large portion of the block beyond that—between Treat Avenue and Harrison Street—was described on maps as “Swamp.”

The Maguire mentioned was Thomas G. Maguire, born in Ireland, who owned the entire south third of the block. He lived in the corner building on Folsom above the ground floor grocery store/bar run by Henry Mangels and later by Charles G. Friedrich. The other corner business, at 20th and Shotwell, was rented to butcher Philip Faubel. Maguire’s sons, Augustus Benedict Maguire and Joseph Maguire, lived off and on in different residences on the block while running a dry goods business on Mission Street and dealing in real estate and insurance. Thomas was a former plasterer for the Southern Pacific Railroad, but the rents must have been good, because by the time of these photographs he was describing his profession in the city directory as “capitalist.”

Much of the Mission District burned in the fires following the April 18, 1906 earthquake and it was a close call for Maguire’s property. A fire at 22nd and Mission was contained after much effort on the first day, and early on April 20, 1906, the great conflagration from Hayes Valley was stopped just a couple of blocks to the west.

Into the 1910s, Maguire’s row of flats still lined the north side of the street and the old water tower still rose behind them. The meat market became a saloon after the earthquake, but the Folsom Street corner still had the grocery store. During World War I, more industrial and commercial warehouse business began creeping south and west from the bay. In 1920, the Maguire properties finally succumbed to the changing character of the neighborhood. A 20,000-square-foot brick warehouse for a carpet cleaning company replaced the old grocery, butcher shop, and flats. The warehouse still stands in 2018, much older than the flats were when they were demolished, and is now serves as the factory for the Timbuk2 messenger bag company.