Many of you may be traveling through San Francisco International Airport during the holidays, fighting your way through check-in lines, waiting out flight delays, and taking off your belt and shoes for the TSA. The whole thing can be overwhelming, and personally, I go to great lengths to avoid flying because of it. (Amtrak just had a sale on “roomette” compartment train tickets…) To soothe jangled nerves I provide these idyllic images of San Francisco Airport in days gone by. 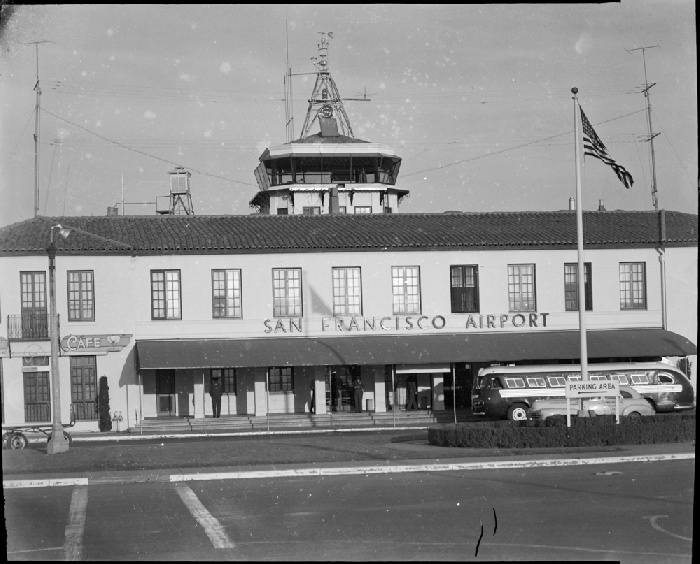 Ah… looks like the “Airport Limousine” bus at the terminal doors, dropping off passengers who shuttled in from the city. Shall we stop for a cocktail at the “Café” bar on the left? In these days, the lobby of the airport looked more like the inside of a classic big city train station: leather sofas, Spanish tiled floors, wrought-iron chandeliers, and a coffered ceiling.

In 1954, a new terminal was built. Before we go inside that, let’s remember where we parked our car first: 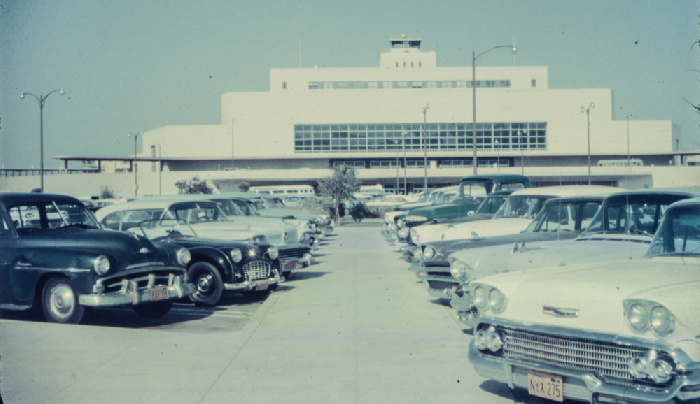 Smaller than many a Target store parking lot today… Some of these views were in collections taken by the commercial photography firms of Lumir Cerny and Morton-Waters in the 1950s. They were rescued by the staff at SCRAP, a fine nonprofit that serves as a “creative reuse center, materials depot, and workshop space” on Toland Avenue near Bayshore Boulevard. Recycled fabrics, buttons, stationary, plastics and wood are accepted and, in turn, are reclaimed by teachers, artists, and creators/educators of all kinds. Occasionally, photographic materials, such as historical negatives or prints too important to be cut up for a grade-school collage find their way to SCRAP. We at Western Neighborhoods Project are helping to find more appropriate homes for these images and, in the process, are able to scan and add them to OpenSFHistory for public enjoyment and education. 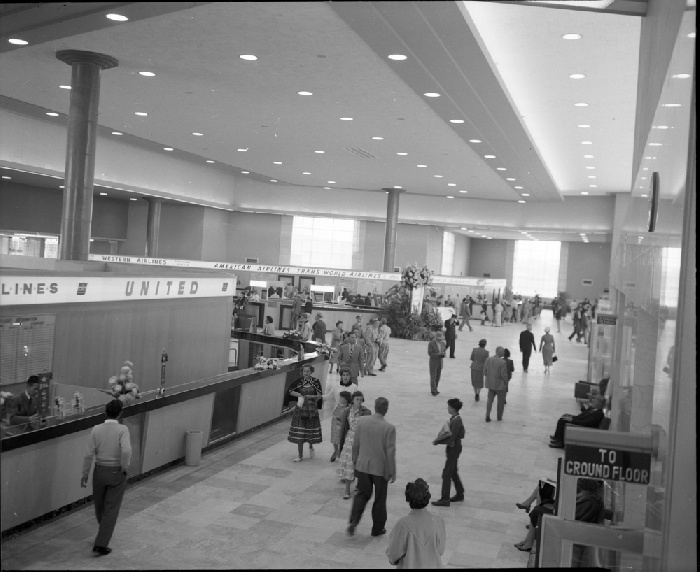 No lines at the United Airlines counter. No one towing their luggage around the concourse because it was all checked at the door. Shall we grab a San Francisco Call-Bulletin newspaper from that paperboy?

Also found at SCRAP were a series of construction images of the two hangars built on Treasure Island in San Francisco Bay. The massive buildings were constructed by the federal government as part of a planned airport to serve the city and used during the Golden Gate International Exposition (GGIE) of 1939-40 as the Palace of Fine and Decorative Arts and the Hall of Transportation. During the GGIE, and shortly after its end, Pan Am’s China Clipper seaplanes docked at the cove beside the hangars. A third building, a curving moderne-style structure meant to act as the terminal and administration building for the airport, survives along with the hangars. (Check out the Treasure Island Museum organization, which hosts some great history programs and exhibits inside the administration building.) 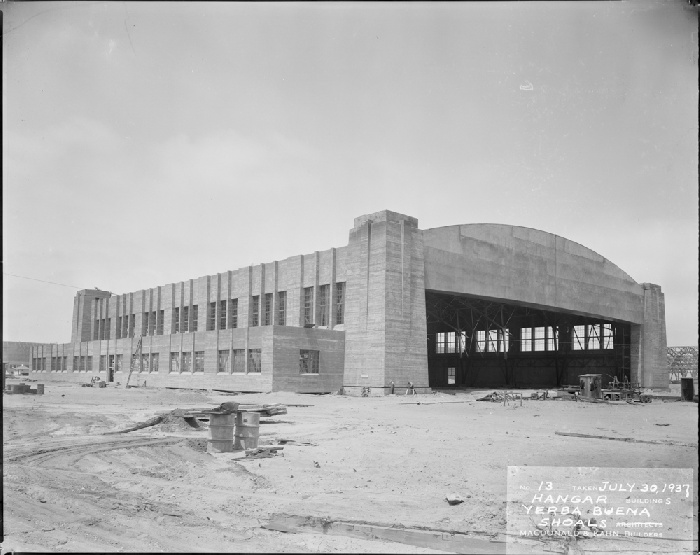 Take a look at this great video of the terminal building and a Pan Am take-off from the cove. The clip is courtesy of our friends at the Prelinger Archives. The longer home movie taken by John H. Summers additionally has amazing 1940s footage of San Francisco Airport.

The Navy took over Treasure Island during World War II and San Francisco’s airport instead grew out of Mills Field in Millbrae. Of course a 400-acre island could never have handled the 550-passenger Airbus A380 airliners or the more than 50 million people a year who travel through SFO these days, but taking off from the bay in an elegant China Clipper might be worth taking off my belt and shoes.

An artist’s 1930s conception of the planned airport on Treasure Island. The three buildings were constructed, but the multiple runways (and air traffic shown!) never existed.