Italian North Beach and Chinatown weren’t the only ethnic enclaves of San Francisco in the early twentieth century. South of Market Street “Greek Town” was the center of local life for Greeks in the city.

The Grecian consulate was at the corner of Mission and 3rd Streets, the Greek American Hall stood at 2nd and Harrison, and the first Holy Trinity Greek Orthodox Church was built at 345 7th Street (the building still stands, now as St. Michael’s Ukrainian Orthodox Church). Greek-owned restaurants, hotels, and cafes operated in between these community centers. In the OpenSFHistory collection we came across a Department of Public Works photo from a century ago this week showing part of Greek Town on 3rd Street: 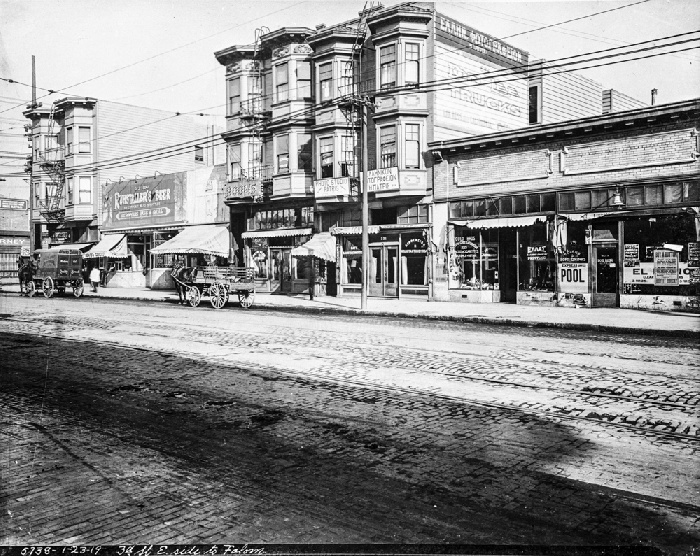 Occupying this block in 2019 is a mixed-use complex built in the 1980s. I believe it was originally called St. Francis Square, but has been rechristened as “SoMa Square.”

(Side note: old-time San Franciscans positively bristled when “SOMA” began being used in the 1980s by real estate developers. My grandfather was among many who called the area “South of the Slot,” a reference to old cable car lines on Market Street. While SOMA is one of many lost battles to real estate rebranding, it is better than another term used for 3rd Street back then: “Skid Row.”)

This circa 1920 photograph of the block gives a closer view of some of the businesses: 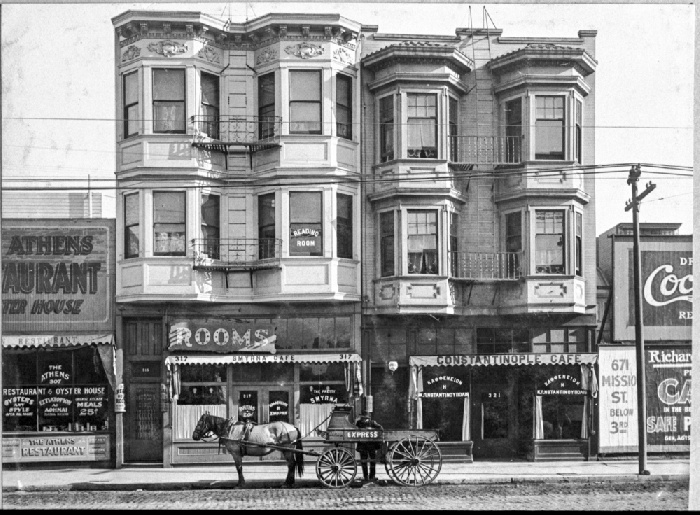 We sent this image to Jim Lucas, president of the San Francisco Greek Historical Society, who shared some thoughts:

“A great photograph related to the history of our community. Some historical context:

“Greeks started to arrive in San Francisco in 1880s but in much greater numbers after the 1906 earthquake and fire, primarily to fill the need for workers needed to rebuild the city.

“A Greek town started to develop on 3rd street. It was the center of the Greek business district. The businesses in the 100, 200, 300, and 400 block of 3rd street of overwhelmingly Greek owned. That would be also true for the adjoining side streets. There is distinction to be made between businesses and residences. Yes, Greeks lived in this area but so did many other immigrants of different nationalities.

“The demographics changed dramatically with the building of the San Francisco–Oakland Bay Bridge. Many Greeks were displaced and moved their businesses to different areas of the city.”

The San Francisco Greek Historical Society often has a presence at San Francisco History Days at the Old Mint. Be sure to drop by the free event the first weekend of March for lots of San Francisco history. More details at https://sfhistorydays.org