Balloon ascensions proved a popular draw on Sunday afternoons at various nineteenth century San Francisco “pleasure gardens” in the Mission District. Acrobats and decided amateurs with more bravery than aeronautical knowledge tried to one-up each other at the Willows (Mission and 18th), City Gardens (12th and Folsom), Hayes Park (Laguna and Hayes), and the celebrated Woodward’s Gardens at Valencia and 15th Street. Blustery announcements and ads promised bigger balloons, longer air times, higher elevations, and larger and larger animals as passengers (dogs, goats, and in one failed attempt, a horse), to be returned to ground by parachute. 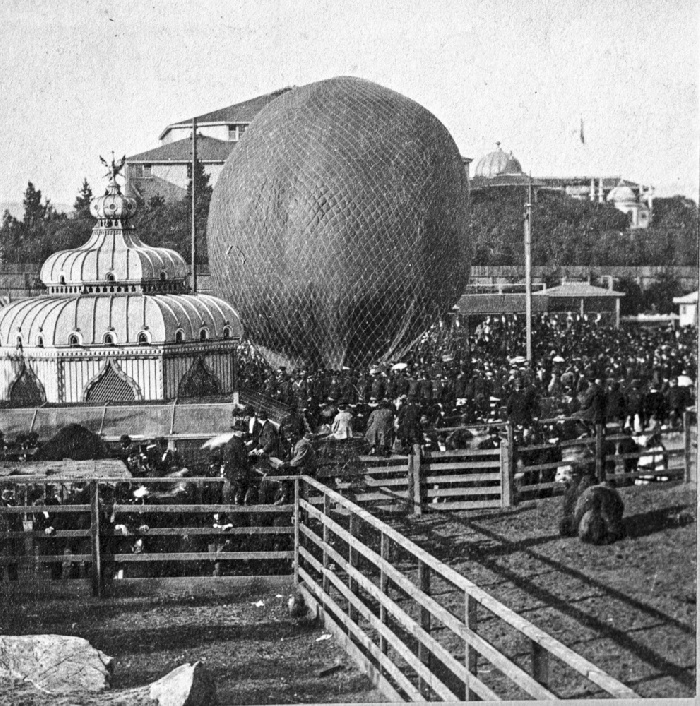 The best-known local balloon adventurers bore the last name Buislay, either actually related or opportunistic in claiming a surname connected with hot air. Auguste, Etienne, Gruet, and Justin Buislay all worked in the city as pantomimes, tumblers, and aeronauts from the 1860s to the 1880s, and specialized in hanging precipitously from a horizontal bar off the balloon with trapeze turns and twists.1

Often, usually, there were troubles: the balloon didn’t inflate enough to rise; the balloon exploded while inflating; the balloon over-inflated, shot up before the rider could board it, caught a zephyr west, and was lost in the Pacific Ocean. Then there were the times when everything seemed to go right until they didn’t. A Buislay ascension from Hayes Park on January 7, 1866, had the balloon and navigator quickly heading for Hawaii:

“A strong wind blew the balloon over the bay, outside the Golden Gate, between the Cliff House and the Light House. M. Buislay, seeing his danger, boldly cut himself and the board on which he stood free from the balloon, and fell like a cannon ball into the bay; rising to the surface, he supported himself by swimming and floating for over half an hour. He was picked up when nearly exhausted by a schooner bound for Acapulco.”2 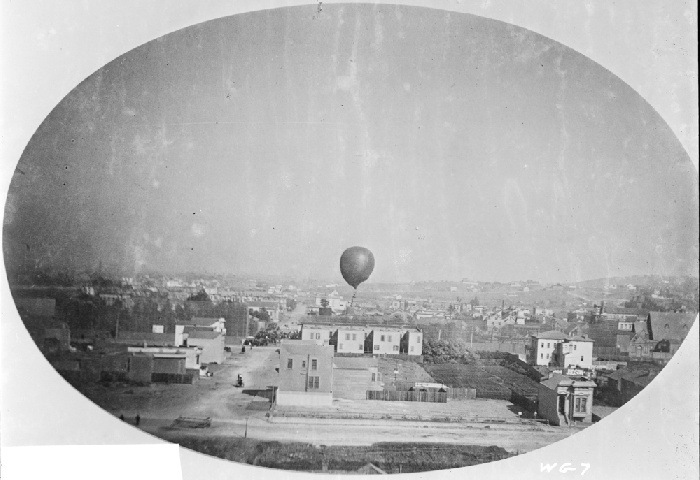 Buislay had more problems later in the month taking off from the Willows with a passenger:

“The balloon only ascended about 100 feet when it was drawn down by the heavy load. It alighted on the roof of the concert hall in the Willows enclosure, and the citizen got out. The balloon shot upward then, with Buislay hanging by his hands to the basket. He hung feet downward for a moment and then drew himself into the basket. The balloon only got up a short distance when it began again to descend. Ballast was thrown out; but to no avail. The balloon fell in the mud and collapsed, and the crowd of spectators started home.”3

Balloon misadventures by Buislays became so common—two of them fell from the trapeze the same week the balloon landed in the bay—that a reporter joked (?) that theatre promoters advertised for disaster: “Maguire has offered a premium to any members of his company who will drift out to sea in a balloon or drop from a four-story window.”4

Auguste Buislay persevered in his art. On March 4, 1866, the Daily Alta reported he made “another narrow escape from death,” when his balloon was carried by winds to the Potrero, where he was dragged before escaping as the balloon went into the bay. The following week, Buislay’s balloon went up about fifty feet before exploding. “[T]he former utterly destroyed, the later not hurt in the least.”5

We have a few photos in the OpenSFHistory collection of balloon ascensions and most are difficult to identify. The image below, however, gives enough information to narrow down a date. 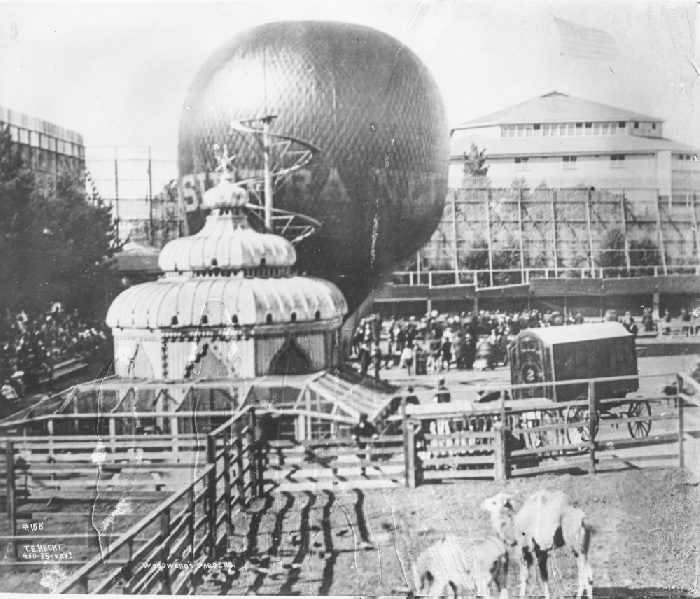 The Buislays gave their series of ever-exploding or lost balloons different names such as “Le Geant” (The Giant), “Eureka,” or “Grand Republic.” The name “Sierra Nevada” can be read on the image above one, a balloon with a few good ascensions in 1874. At first, the balloon is mentioned as belonging to a Professor Allen (such titles were often used to add scientific credibility to the performers). Allen tried to take off from Woodward’s Gardens in March 1874, but high winds pushed the balloon sideways as it began to rise. A number of men tried to rein it in, including proprietor Robert Woodward, who was lifted a good ten feet off the ground before he let go and tumbled down without injury. All agreed to quit for the day.

The next month, Gruet Buislay with five passengers got the Sierra Nevada off the ground, but lost control of its flight path immediately. The balloon headed in the direction of Redwood City, then veered east. “[T]he crowd immediately began to disperse, awaiting with lively anticipation the freshest telegrams from the Alameda County Hospital.” A couple of hours later, all landed safely on the ranch of Howard Overacker in what is today Fremont, left to figure out a way to back across the bay with their giant deflated canvas and basket.6

The last reference I could find of the Sierra Nevada was from July of 1874, when a Buislay alighted from Woodward’s Gardens with a reporter and another gentleman. The Sierra Nevada, spirited east by the winds, headed for the foothills of its namesake mountain range, and the company eventually made landfall in a forest fifty miles northeast of Auburn. The men needed three days to get home. The Examiner reported on their escape out of the wilderness. “When they left the balloon they had a small loaf of bread, and had lost most of their clothing swimming the streams.”7