Streetcars once rumbled nearly everywhere in San Francisco. We have thousands of streetcar images on OpenSFHistory.org to prove it. As you sift through all the streetcar images, you get accustomed to seeing them in the middle of streets and occasionally in tunnels. So when you see a streetcar image that isn’t in a street or tunnel, you tend to notice it. A recent upload to OpenSFHistory includes one such noticeable image, which led me down the rabbit hole of other similar images on the site. It was this 1942 image of the J-Church streetcar by the Dolores Park streetcar overpass. 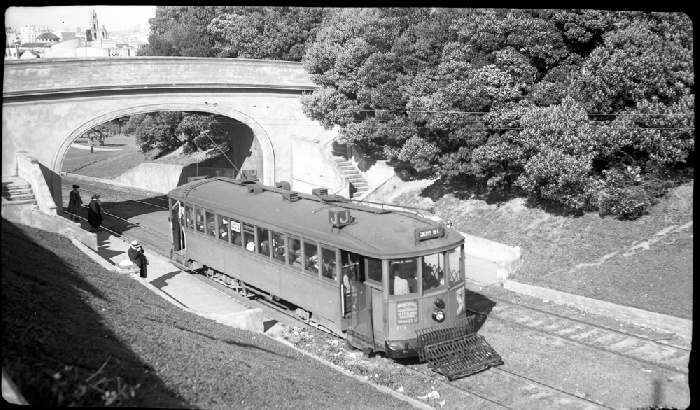 Municipal Railway J-Church streetcar #133 on the private right of way through Dolores Park. (wnp14.12345; Courtesy of a Private Collector.)

Anyone who has ridden the J-Church Muni Metro line knows that, as it heads south on Church Street, it veers off the street and into Dolores Park at 18th Street. It then travels along the west edge of the park, but instead of re-entering Church Street where the park ends at 20th Street, the line curves southeast, then south again at Liberty to 21st Street. At that point, the line curves back southwest, until finally rejoining Church Street at 22nd Street. The J-Church streetcar line later became the J-Church Muni Metro route. Why the jaunt off the street and into private lands? Let’s look at the history of the line first.

The first thought of rail transit on Church Street came from the Market Street Cable Railway in 1892, when they applied for a franchise for a cable car line that would run from 30th & Church via Church, Duboce, and Fillmore to Bay Street in the future Marina District. This line was not finished but tracks remained on part of Church Street along with a crossing at 24th street for year afterward, much to the chagrin of residents there. 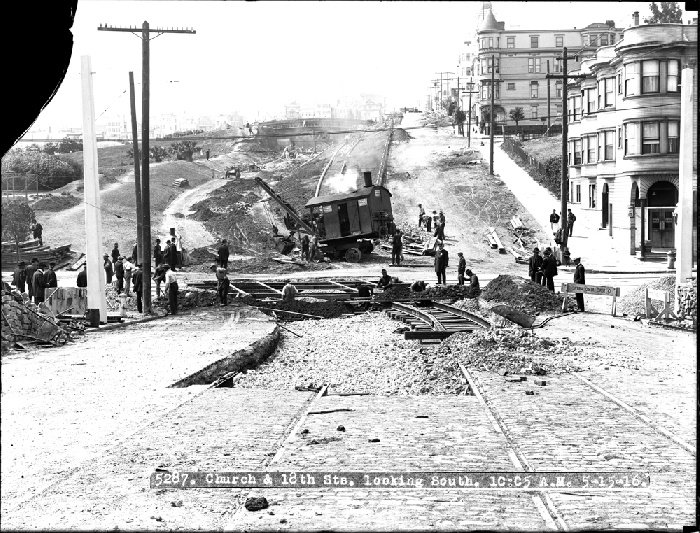 In 1912, the City engaged Bion J. Arnold to design the growing Muni. For a Church Street line, he was faced with the issue of the steepness of the street as it went over Dolores Heights. Arnold envisioned a right of way through the park, but south of 20th street, his design had the tracks swerve left (east) on 20th and then turn to head through a tunnel for autos and streetcars under the line of Chattanooga Street with Liberty and 21st streets passing above the tunnel. The tracks would have then gone about a half block on Chattanooga before passing diagonally through the block to 22nd & Church. This tunnel plan was one of at least fifteen proposals for the J-Church streetcar line. The San Francisco Board of Supervisors ultimately adopted the private right-of-way plan that circled around the steepest part of the Church Street hill, because it was less expensive than a tunnel and other plans. 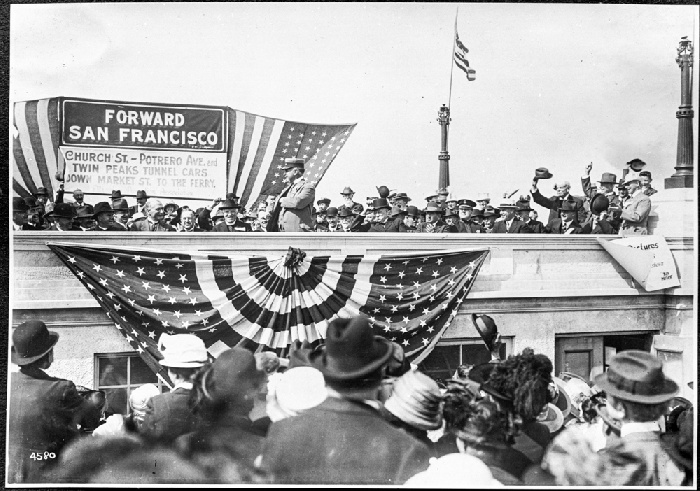 The J-Church streetcars began operating on August 11, 1917. As was his custom, then Mayor James “Sunny Jim” Rolph, acted as motorman for the first streetcar to travel the route. The San Francisco Chronicle reported that Rolph received a union motorman’s cap, card, and button at the dedication ceremony for which he declared that he was “exceedingly proud.” In Rolph’s speech, he stated that the “new Mission,” through which the J-Church streetcar would run, was the most prosperous part of the City. 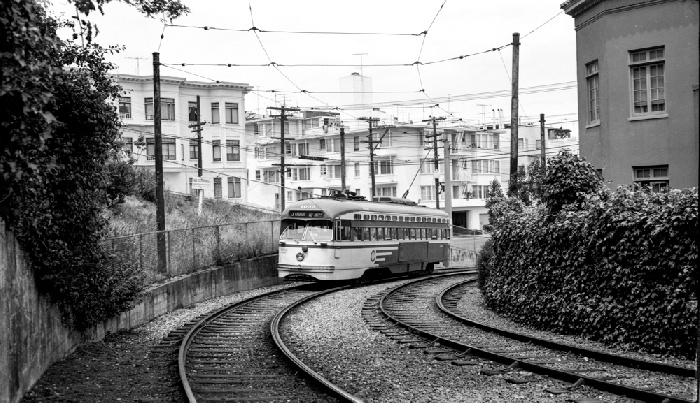 The original J-Church route went down Market Street, then to Geary, Van Ness, Market (again) and Church and its right-of-way to 30th Street. This line was changed to run down Market from Church, directly to the Ferries on June 1, 1918. There is still a climb as the line goes through Dolores Park and the neighborhood to the south. The grade is 9% in this area, the steepest climb in the Muni Metro system. However, the J-Church’s neighborhood meandering avoids the worst of the hill. Originally, at 30th Street, the J-Church line used a switchback, as the cars were double ended (i.e., operated from either end). After 1957, when single ended PCCs took over operation, a triangular junction called a “wye” to turn the streetcars around was used. 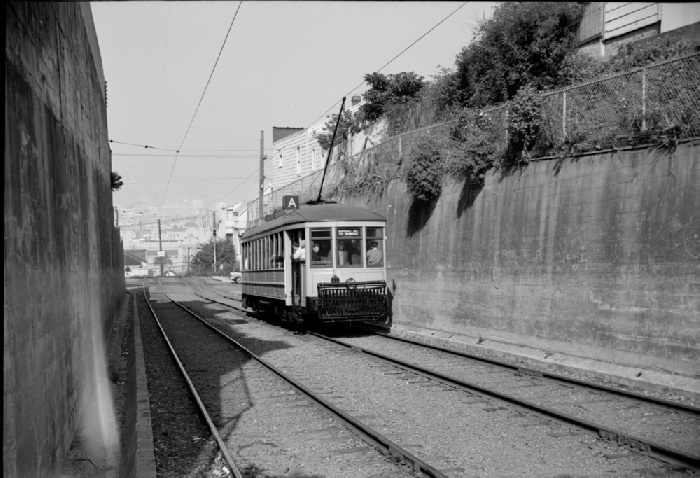 Ironically, this steep grade saved the J-Church line from being replaced by buses. After World War II, San Francisco began replacing the streetcar lines with buses, but the Church Street hill proved too steep. In fact, the new 1949 trolley coaches had a sign on their roll signs indicating a line 46 Church. However, the J-Church streetcar continued to operate. It would continue in service until 1981 when it was converted to Muni Metro light rail trains. It was the last streetcar line to be converted to light rail. (Light Rail is really a modern term for a streetcar capable of running in trains.) After the conversion to light rail, Muni extended the line to Balboa Park through the Bernal Cut previously used by the San Francisco & San Jose Railroad and later the Southern Pacific Railroad. 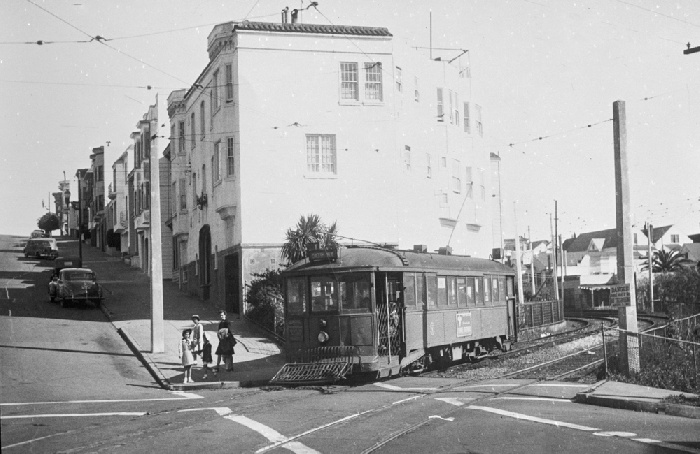 The J-Church streetcar line was not the only line to leave the streets and tunnels of San Francisco, but it is always interesting to see the rarer images of streetcars in parks and private right of ways.

(Valuable information for this article was provided by Emiliano Echeverria, a veritable font of Muni information)