While Golden Gate Park was officially established in April 1870, it was quite some time before it began to take the shape that we know and love today. Grass and trees had to be planted, roads had to be added, and structures had to be built. A little over 20 years later, San Francisco was prepared to show off its big new park to the world. Michael H. de Young had been a commissioner at the 1893 Columbian Exposition in Chicago and saw the opportunity to do a similar fair in San Francisco, where the weather would allow it to be held in the winter. Over park superintendent John McLaren’s objection, plans to hold the 1894 California Midwinter International Exposition in Golden Gate Park were approved. 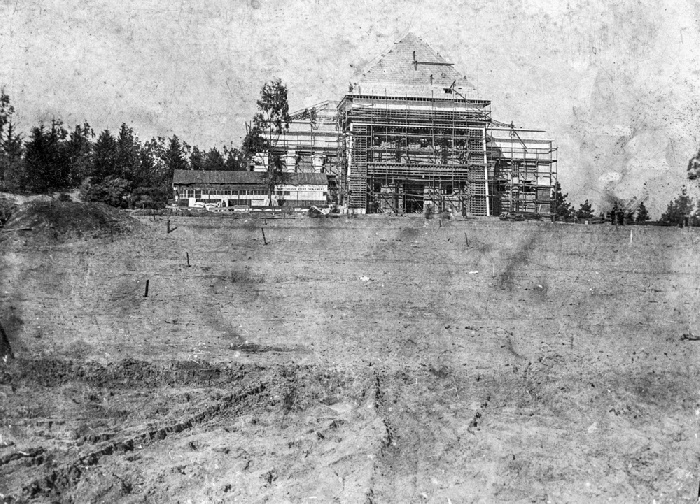 The 1894 Midwinter Fair was held in today’s Music Concourse area. A number of buildings were constructed around a midway, which featured Bonet’s Light Tower at the center. One of the buildings erected on the north side of the midway was the Fine Arts Building, which was to feature art by numerous artists, including 28 women. The Fine Arts Building was spearheaded by de Young and was a 50-foot brick structure designed in a pseudo-Egyptian Revival style. Iron trusses supported a sky-lit roof. In the image above, you see little other than dirt in the area leading up to where the Fine Arts Building is being constructed. 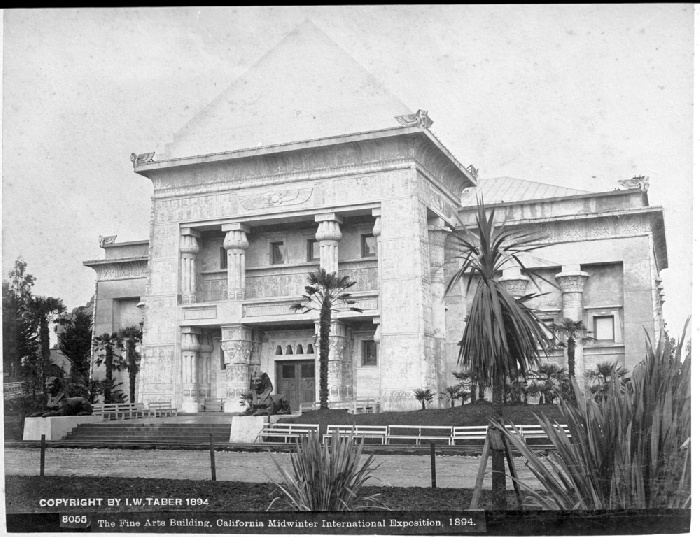 The Midwinter Fair lasted from January to July 1894. The Fine Arts Building, seen above during the Fair, was a major attraction. Afterwards McLaren made sure to get rid of most remnants of the Fair, even having Bonet’s Light Tower torn down and sold for scraps. The midway underwent a major redesign into what we know now as the Music Concourse, so that area could be used as a public gathering place and for musical performances. One building that was not torn down was the Fine Arts Building, which de Young had plans for. Following the Fair, the Fine Arts Museum was designated as a museum for the people of San Francisco. 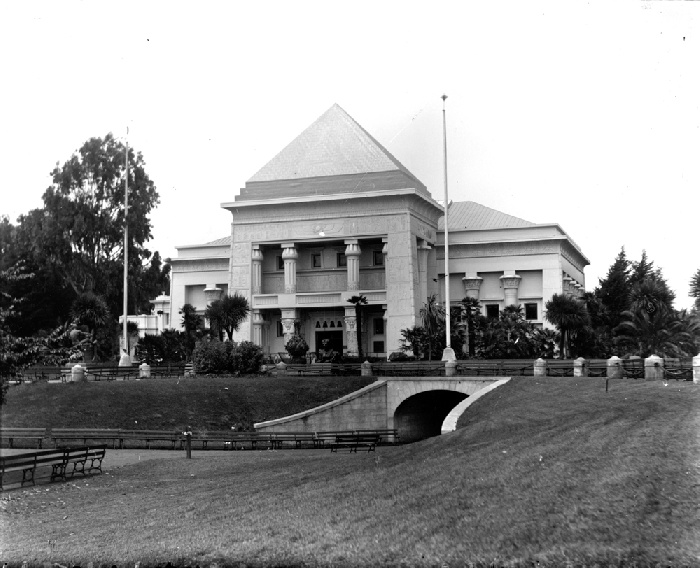 The newly christened Memorial Museum opened on March 25, 1895. It was free to the public and mostly featured the artwork of the artists whose works were displayed during the Fair. They had been convinced by de Young to donate their art to the museum. You can see new landscaping and the addition of various trees around the museum in the image above. 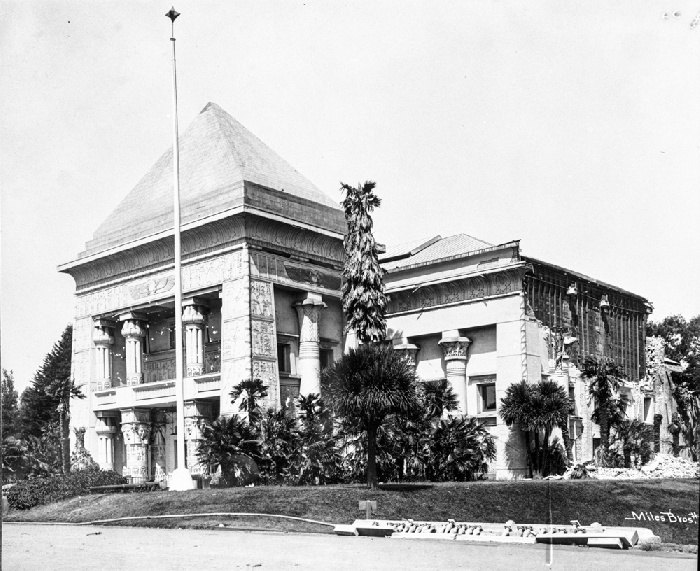 11 years after it opened, the Memorial Museum was damaged in the April 18, 1906 earthquake. As seen above, part of the East wall of the building fell down. The west wall was similarly damaged and cracks appeared in many places. The museum had to be closed for a year and a half to effect repairs. After it reopened, it continued to grow and ever larger crowds visited it. Soon, de Young realized that the old Fine Arts Building was not sufficient for the Memorial Museum. 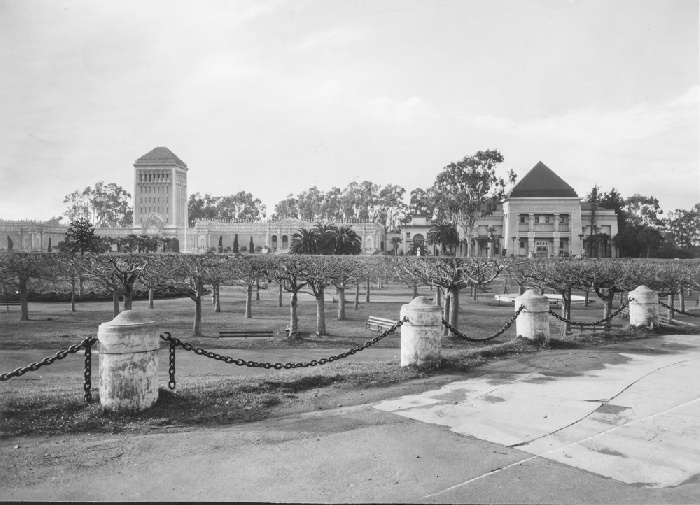 After the 1915 Panama Pacific International Exposition in San Francisco, de Young hired the PPIE’s architecture coordinator, Louis Christian Mulgardt to design a new museum. Mulgardt’s Spanish-Plateresque-style building was constructed immediately to the west of the Memorial Museum. It was completed in 1919 and de Young gave it to the City. In 1921, a central section with a tower was added and a west wing completed it in 1925. Because of all of his support, San Francisco renamed the museum as the M.H. de Young Memorial Museum. In the image above, you can see the new and old museums side by side in 1927. 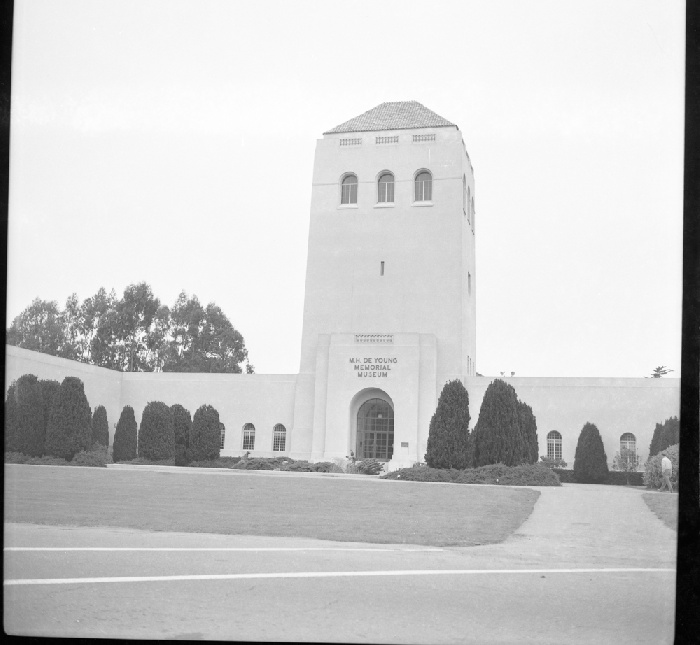 Michael H. de Young passed away in 1925. Four years later, the original Egyptian-style structure from the 1894 Midwinter Fair was declared unsafe and torn down. In the 1940s, the rest of the Memorial Museum was found to be rusting and was taken down as well. Thereafter, the front edifice of the new museum was remodeled to remove the Spanish-Plateresque elements for a “cleaner” look as this 1950s image shows.

As in the 1906 earthquake, the de Young Museum again suffered serious damage in the 1989 Loma Prieta earthquake. It was temporarily repaired, but eventually plans were adopted to raze the museum and build a new one. The de Young Museum closed at the end of the year 2000 for this purpose. On October 15, 2005, the brand new de Young Museum was opened. The new museum retained certain elements of the prior museum, but the structure was entirely new. There was a tower like the old museum as the above image shows, but the design is supposed to invoke the natural elements of the park. Today, the de Young Museum continues to be one of the most popular attractions in the park.

The view north from the Music Concourse has always looked at an art museum, but that view has changed quite a bit over the years.