Saturday October 22, 1927 was a typical foggy evening. Fog horns sounded through the murky mist. The lumber ship, the SS Coos Bay, had left earlier from Bay Point to return to its namesake port, Coos Bay, Oregon with a stop at Angel Island for supplies. As it passed through the Golden Gate in the heavy fog, the Coos Bay’s captain and crew became confused by the various fog horns and ship whistles. Accordingly, the captain ordered a slow bell and had lookouts posted. Despite the precautions, a strong ebb tide and northwesterly swell pushed the Coos Bay far out of the main channel and it came crashing into the rocks along Lands End, north of Lincoln Park. The Golden Gate’s gloom had claimed another victim. 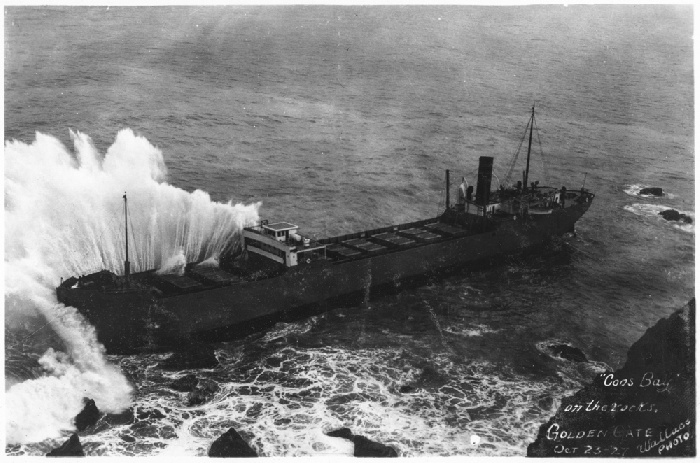 The Coos Bay had started its life at sea as a Navy collier called Vulcan. Built in 1909, it had special coal-handling gear so that it could support the Navy’s coal-powered warships. It served the Navy through World War I before it was purchased by the Pacific States Lumber Company in 1924. Thereafter, she was rechristened as the Coos Bay and made regular trips between her home port of San Pedro in Southern California, the San Francisco Bay, and Coos Bay, Oregon with loads of lumber. 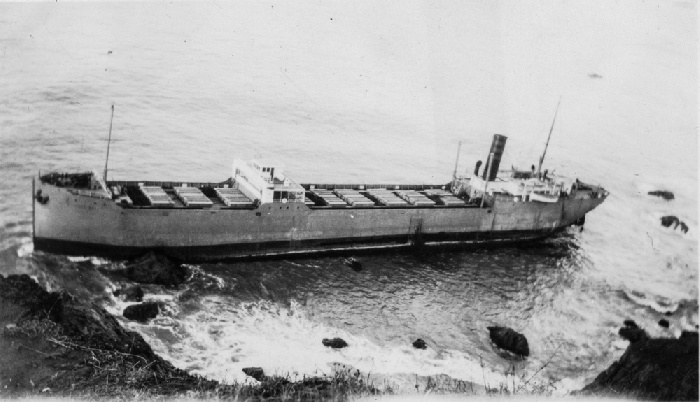 After the Coos Bay struck the rocks at Lands End, the heavy surf repeatedly lifted it and dropped it on the rocks. The rocks tore open the hull and caused the engine room to flood. The ship’s engineer described being close to the bottom of the ship as “[m]uch worse than an earthquake1.” As the ship rocked back and forth, the radioman tried to reach rescue tugs to no avail. In an interview the following day, the radioman stated that he felt like he had “lived a million years last night”2. Despite fears that there might be an explosion or the ship would break in two, the crew waited out the night on deck, keeping their morale up with coffee and songs. 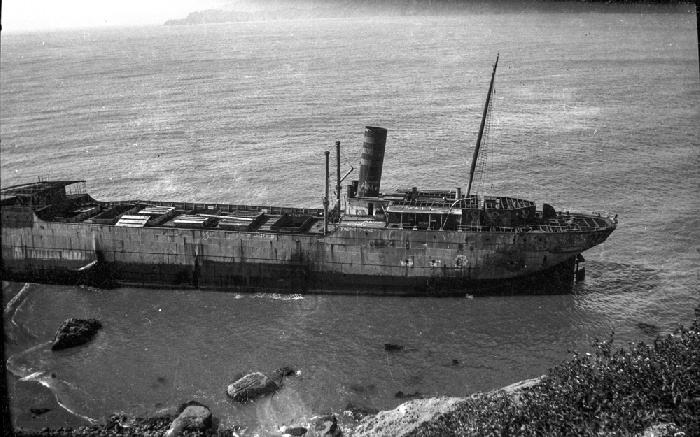 As dawn broke on Sunday, August 23rd, the heavy fog had lifted. News of the Coos Bay had spread rapidly around town and people began showing up to see the shipwreck. Thousands of people came to the cliffs at Lands End to see the spectacle. At 8:00 a.m., the Captain, B.W. Olsen, decided there was no point in keeping the crew aboard and ordered his men to shoot a breeches buoy line ashore with a Lyle gun. The first shot went high and far, causing spectators on the cliff above to duck and eventually hitting the side of a home on Clement Street before coming to a stop in an alley. Men from the Coast Guard Lifesaving station then fired a buoy line to the ship and 14 crewmembers and the ship’s mascot dog named Spark were brought to shore. Lifeboats from the Fort Point Coast Guard station rescued 19 more men. Captain Olsen was the last to leave, only doing so upon orders of his employers. 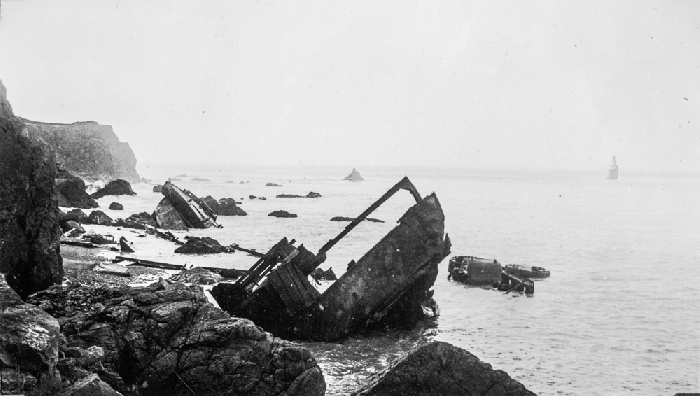 The ship’s cargo was mostly recovered thereafter, but efforts to free the Coos Bay from the rocks failed. As the Coos Bay itself was too badly damaged to be salvaged, it was abandoned. For several years, the Coos Bay remained mostly intact, but the waves continued to pound it against the rocks until it broke in pieces. Sightseers continued to journey to Lands End to see the wreck for a few years after it happened. The San Francisco Junior Chamber of Commerce led a campaign that led to the Coos Bay’s remains being scrapped in April 1930, but some pieces still get exposed at low tide.