70 years ago, on November 2, 1949, the grandest theater on the west side opened. It was dubbed the Coronet Theater, though there was some thought given to calling it the Ritz Theater. Befitting a theater that was almost called the Ritz, the Coronet looked to provide a luxurious viewing experience when it opened with loge-style stadium seating for 1350 people, including 550 rocking chairs, a balcony, a large screen, and, in a nod to the “fad” of the day, a television room where theater attendees could watch TV for free. The opening day movie was the Howard Hawks comedy, I Was A Male War Bride, starring Cary Grant and Ann Sheridan. It was “[t]he utmost in theater comfort” according to the Chronicle1.

Coronet Theater with marquee for first film shown there, 1949. (Courtesy of Jack Tillmany.)

Located at 3575 Geary Boulevard, the Coronet was built by San Francisco Theatres, Inc., which also owned the Alexandria Theater down the street at Geary and 18th Avenue and many other theaters, such as the Balboa, the Coliseum, the Metro, the Harding, and the Vogue. In those days, first-run films opened at downtown theaters. So beginning with I Was A War Male Bride, the Coronet was a second-run theater for its first six years. The Coronet and the Alexandria shared a booker who put “prestige” films at the Alexandria and action and/or adventure films at the Coronet.

Streetcars near Coronet Theater with Oklahoma on the marquee, December 1956. (Courtesy of Jack Tillmany.)

On February 1, 1956, the Coronet’s days as a second-run theater ended. It began a new life as a first-run theater with an exclusive–no other theater in the Bay Area had it–showing of the Fred Zinnemann blockbuster movie, Oklahoma! starring Shirley Jones and Gordon MacRae. Oklahoma! stayed at the Coronet for a record 44 weeks, playing in a high-resolution, wide 70mm format with stereophonic sound called the Todd-AO process. When it left, it was replaced by Around the World in 80 Days. The Oscar Best Picture-winning David Niven film merely ran for an amazing 96 weeks at the Coronet, more than double Oklahoma!’s record.

Looking west down Geary Boulevard at Coronet Theater with Ben-Hur on marquee, May 10, 1960 (Courtesy of George Fanning/SFMTA.)

The Coronet became the king of the long-running movies. After the first two successes, it featured such top movies as Ben-Hur for 75 weeks, My Fair Lady for 50 weeks, Hawaii and Camelot for 35 weeks each, Funny Girl for 59 weeks, and The Godfather for 32 weeks. 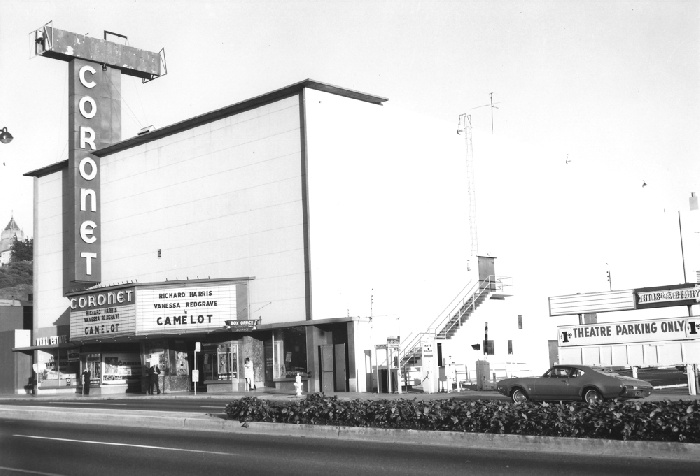 In the mid-1970s, Gary Meyer was the booker for the Alexandria and Coronet Theaters. The big 20th Century Fox movie in the summer of 1977 was The Other Side of Midnight. Fox executives wanted it in the “important” theaters2. Meyer knew about a stealth marketing campaign by the director of another Fox movie that executives did not care for. So Meyer was more than happy to book The Other Side of Midnight at the Alexandria, while taking a chance on a space opera called Star Wars at the Coronet. The only other theater in the Bay Area that booked Star Wars at that time was in San Jose.

Everybody knows now that Star Wars became THE blockbuster film that summer and a cult phenomenon ever since. The Coronet saw lines around the block of moviegoers anxious to see Star Wars. Thereafter, every Star Wars film got the Coronet Theater treatment. Additionally, some of the re-releases and special editions had runs at the Coronet.

Like many, I saw all the Star Wars films that played at the Coronet. While I missed the first run of the first Star Wars film, I saw it there subsequently on a re-release. It was widely known throughout the Bay Area that the Coronet was the place to go to see a Star Wars film. George Lucas himself has said it was one of his favorite theaters.

In 2000, United Artists Theatre Co., then the owner of the Coronet, filed for bankruptcy and the Coronet was put up for sale. It was eventually purchased by the Institute for Aging, who planned to tear the theater down and build a nursing home. The Coronet remained open until 2005 when the last film shown there was another Best Picture winner, Million Dollar Baby. There was some hope among Star Wars fans that it would remain open through the summer of 2005 so that the sixth Star Wars film, Revenge of the Sith, could be shown there. However, the Coronet closed its doors forever on March 17, 2005, a mere two months before Revenge of the Sith opened.

A couple of years after it closed, the Coronet was torn down and replaced by the Institute of Aging building you see there today. All of the “grand” west side San Francisco movie theaters are now gone, leaving just multiplexes and small theaters for Outside Lands movie lovers who do not wish to travel far for a theater experience. Those of us who grew up with movie palaces miss them dearly. Today’s young movie fans don’t know what they are missing.