Last week, we presented five of our favorite images that were added to our OpenSFHistory collection in the first six months of 2019. This week, we are looking through our favorites from July through December of last year. So let’s get going in our journey through time! 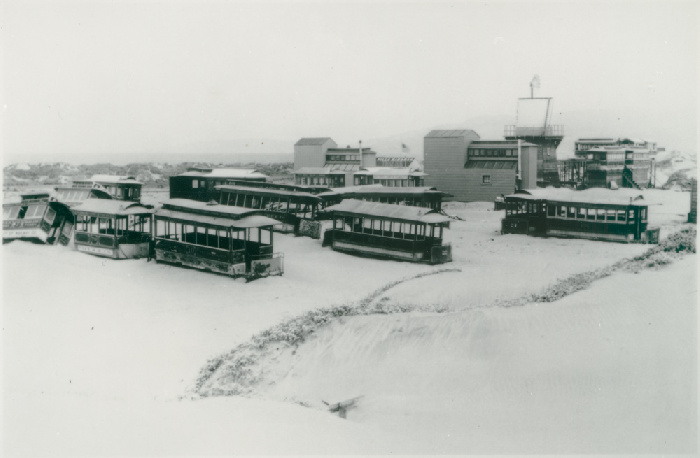 Looking northwest from near 47th and Kirkham at streetcar bodies dumped in the dunes at Carville, circa 1900. (wnp70.0815; Marilyn Blaisdell Collection / Courtesy of Molly Blaisdell)

.
Hopefully by now, most people know the story of Carville. For the uninitiated though, as San Francisco replaced old horse-drawn streetcars with cable cars and electric streetcars, the old horse-cars were sold off and taken to the great vast sand dunes in the Outside Lands. Some enterprising people took those horse-cars and would fit several together to create homes and buildings for businesses. A Bohemian community of those horse-cars homes and businesses grew out near the ocean just south of Golden Gate Park. In the great image above, you can see some horse-cars that were owned by Jacob Heyman. He was selling lots and would include a horse-car or two for the buyers. Behind them, you can see some of the re-purposed horse-cars already being used as buildings in Carville. It is probably a trick of the old-time equipment used to take this image, but it almost looks like the horse-cars and ground are covered in snow. Alas, it is just how a normal, foggy day in the dunes was seen through the lens of the times. 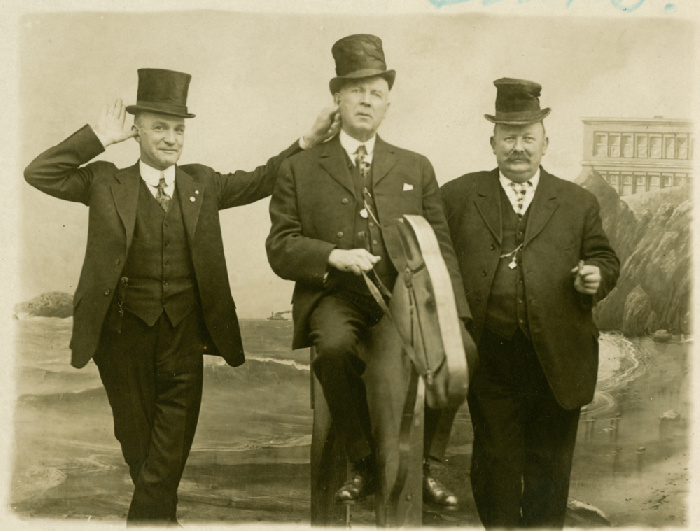 As photography became more popular in the late 1800s and early 1900s, photography portrait studios began popping up around tourist destinations. In the days long before everyone had a camera in their cellphone, the only way for people to get pictures of themselves on their vacations was to have their portrait taken at these studios. The Cliff House and Ocean Beach areas had several such portrait studios. The studios had backdrops of the local sights and various props. Some of these portraits have ended up in our collection in the past few years, but last August, we added a large group of these portrait images from the local studios to OpenSFHistory. Most of these images show the subjects looking very prim and proper as they hold still for their picture to be taken. I really liked the image above though because it is one of very few where the subjects looked to be having a little fun. All three men are well-dressed in suits and top hats. However, the gentleman on the left is holding one thumb in his own ear and the other thumb is his friend’s ear, while the gent in the center sits on a prop donkey and questions why his buddy has thumbed his ear, and the man on the left has a bemused smile on his face and a cigar in his hand. The image proves that some boys never grow up. 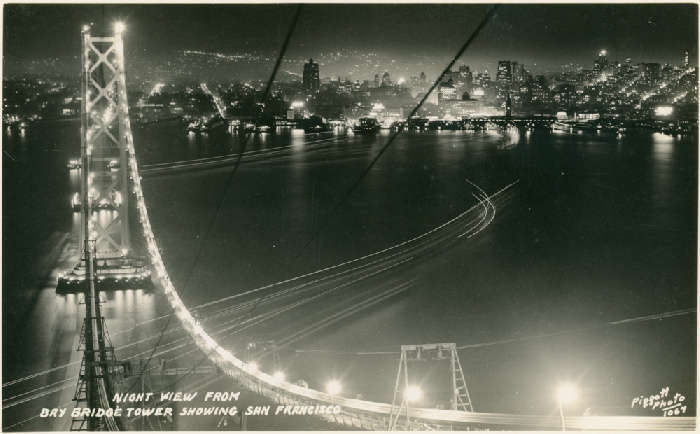 In the mid-1930s, the Bridges–Golden Gate and Bay–were under construction. During the Bay Bridge construction, photographer J.K. Piggott climbed one of the towers with his photography equipment. From the top, he took this stunning view of the Bay Bridge and San Francisco at night. In the image, we can see that the construction has reached the point where the towers have been constructed and the cables laid, but there is no roadway yet. The tracks of light in the water are boats and give you an idea of how long the exposure was for the shot. You can see the Ferry Building and its clock tower on the waterfront and at the top right, there’s the then still new Coit Tower. The city lights extend all the way to the hills beyond the downtown area. 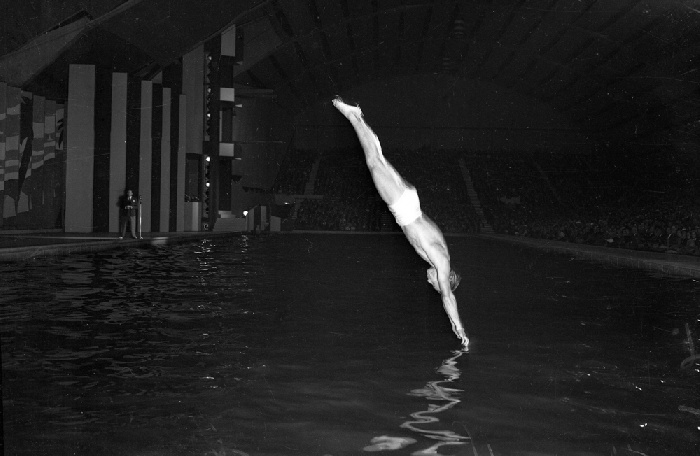 To celebrate the completion of the Bridges, San Francisco held a World’s Fair in 1939 and 1940 called the Golden Gate International Exposition on Treasure Island, which had been built for the Exposition. The theme of the event was the “Pageant of the Pacific” and it showcased the nations that encircled the Pacific Ocean. Among the attractions was a swimming and diving show called the Aquacade. At this show, some photographer caught this perfectly timed image of a diver. The diver has great form and the flashbulb light reflection off the diver onto the water makes for a very cool effect. 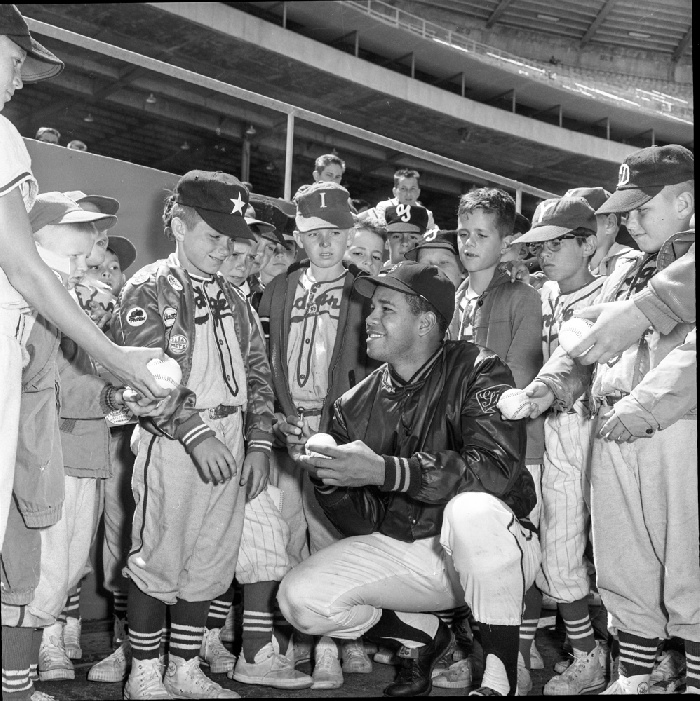 As a long-time San Francisco Giants fan, I always like to see the baseball pictures that show up in our OpenSFHistory collection. This image is great because it really demonstrates how the love of the game is passed down. The Giants’ Hall of Fame pitcher, Juan Marichal, is surrounded by Little Leaguers looking for an autograph. You know that it meant a lot to these kids to have their baseball hero spend some time with them and give them a memento that they would always treasure. If anyone recognizes one of the kids in this picture, we would love to find out who these kids are.

So these are five more of my favorite images that we posted this year. It was extremely difficult to narrow it down to just ten images to feature last week and this week because there are so many wonderful images being added all the time. With the 6000 posted this year, we now have just over 46,000 on the site. We will be adding many more in the coming year. I look forward to seeing what is to come.