Mission High School holds the strange distinction of being the oldest high school at its original permanent site, 18th Street between Dolores and Church, while not having the oldest original high school building. The reason for this dichotomy was a devastating six-alarm fire that destroyed Mission High on January 19, 1922.

Mission High School was founded in 1890, but it did not have a permanent location initially. In 1896, the Board of Education purchased a plot of land on 18th Street from the Jewish Cemetery Association and began building. A new three-story brick building was completed in 1898 in an Italian Renaissance Beaux Arts style and Mission High moved into the new building. 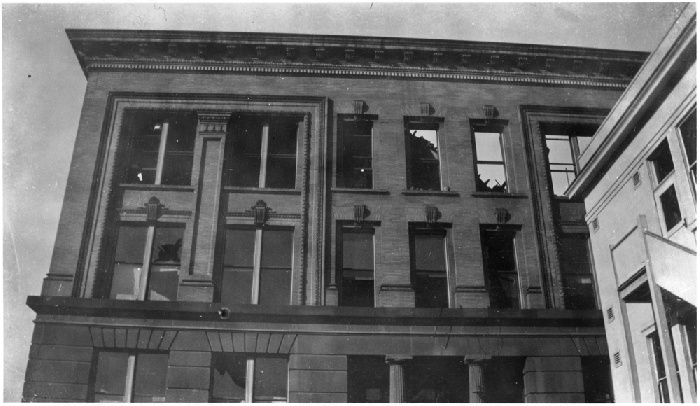 On the evening of Thursday, January 19, 1922, over 1000 students and teachers were at Mission High School for night high school courses known as the Humboldt Evening High School. San Francisco was in the midst of cold weather, so the furnaces at the high school were turned up. One of the flues was faulty, however, and live embers apparently shot up through the chimneys and onto the roof which caught fire. By the time firemen arrived, the roof was ablaze and firemen had little hope of saving the building.1 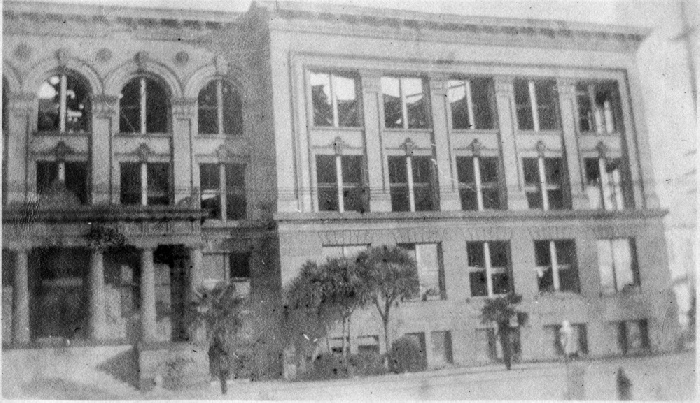 The fire caused the school’s electrical system to fail, plunging it into darkness. The principal and teachers therefore set up a human “guide line” to lead students from their classrooms to safety. As they left, students and teachers took typewriters, adding machines, other equipment and specimens from labs to save them from the blaze. By all accounts, the exiting staff and students maintained level heads. Firemen had to prevent some students from reentering the building to save even more school property. 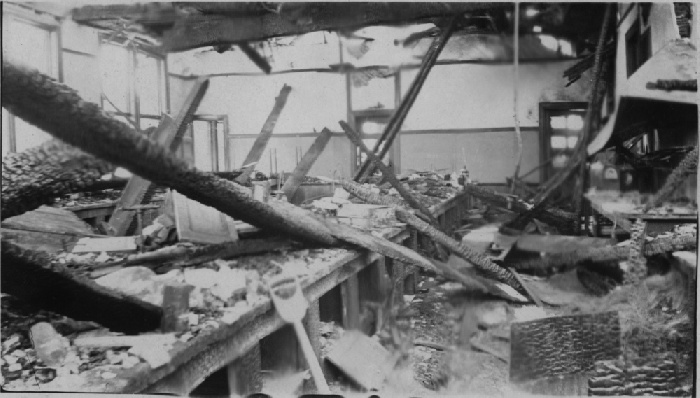 While firemen worked to put out the flames, they simultaneously sought to ensure that everyone was out of the building. Two students were found to be missing and were soon discovered trapped on the third floor of the high school. Firemen sent up extension ladders and rescued the two students, who suffered only from some smoke inhalation. The six alarms brought much of San Francisco’s fire department from around the city to the scene. The large number of responders and the City’s post-1906 improved water system prevented the fire from spreading to neighboring properties and saved a two-story wooden annex at the school site. 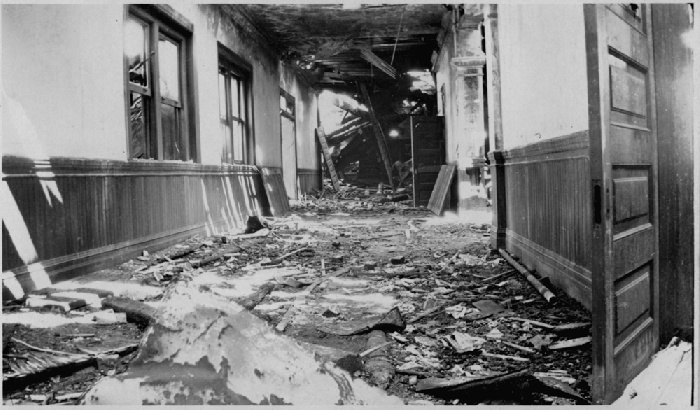 The only serious injury suffered was by Captain E.R. Doherty of Engine Co. #11. He was knocked off a ladder and suffered a broken leg and cuts and bruises. He was the only person who had to be transported to a hospital as a result of the fire. Many off-duty firemen and police officers showed up at the scene to provide assistance. Thousands of people also arrived to gawk at the rescue efforts. Boy Scouts locked arms to keep the crowd at bay and were later honored with official badges by the Fire Chief as “Fire Scouts2.” 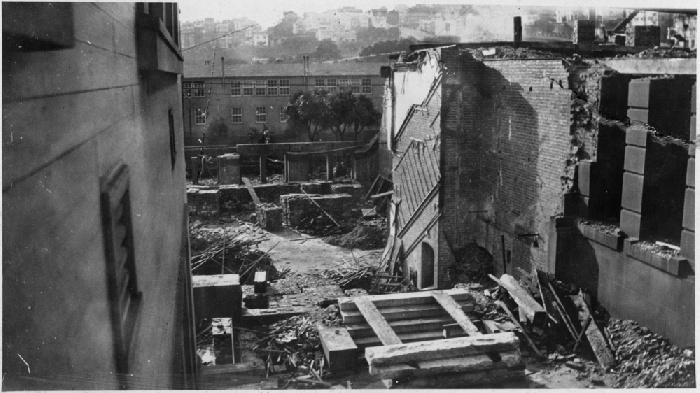 In the immediate aftermath of the fire, the Superintendent of Schools, Alfred Roncovieri arranged for Mission High Students to share Lowell High School. The Humboldt Evening High School students split up their students between the annex building at Mission High for commercial courses and Polytechnic High for technical and academic studies. The R.O.T.C. at the school obtained two large tents from the army quatermaster and set them up by the annex to house some classes3. Temporary buildings across the street from the high school in Mission Park (later Dolores Park) were also used for classes. 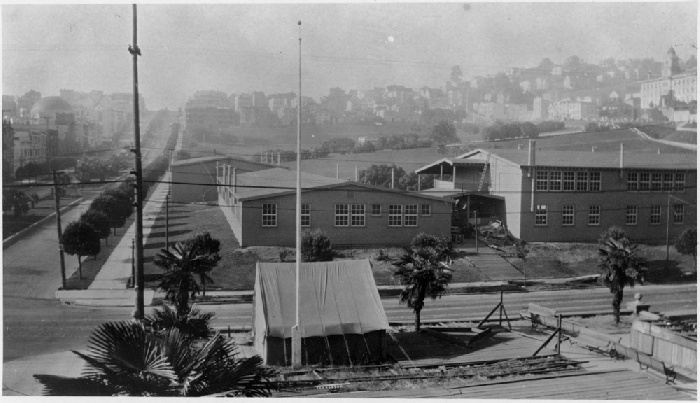 Temporary buildings in Mission Park and tent on Mission High grounds used for classes after fire, circa 1922. (wnp12.00252; Courtesy of David Gallagher)

San Francisco eventually authorized the building of a new Mission High School. The City Architect, John W. Reid, Jr., drew up the plans for a new building in a Baroque style with some elaborate ornamentation, particularly on the central tower, possibly to complement the nearby Mission Dolores Basilica. Construction occurred between 1925 and 1927 and the new high school was dedicated by Mayor James Rolph on June 12, 1927. 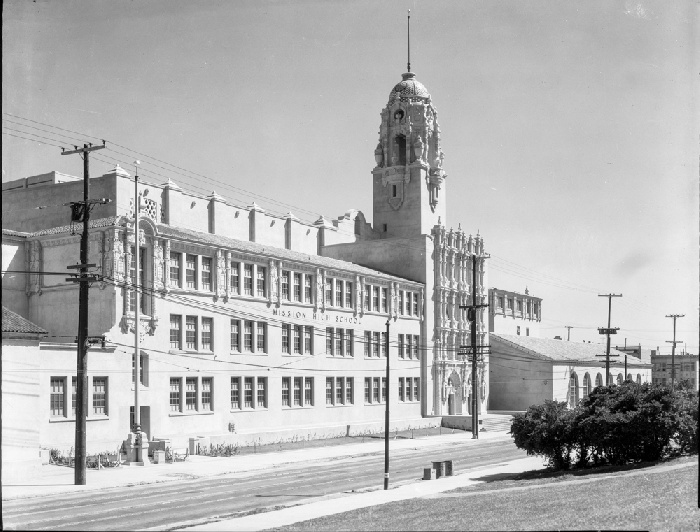 Mission High School remains in operation today, but because the original buildings were destroyed and replaced, it does not have the oldest high school buildings at the original site. Galileo High School, for one, was dedicated in 1924 at its present location on Francisco at Van Ness. The Galileo building was upgraded in the 1970s, but remains in place. The current Mission High Schools building received a major accolade as San Francisco Designated Landmark No. 255 on September 2, 2007.