One of the features during the closing days of the 1915 Panama-Pacific International Exposition (“PPIE”) was a children’s pet show. Over 1000 children came from Northern California and neighboring states to show off their pets in the Motor Transportation building at the PPIE. As the Chronicle reported, the pets included “snakes, lizards, [rac]coons, mice, bantams, fighting guinea pigs, dogs, cats, rabbits, birds, turtles, various kinds of insects, goats, and even a burro and a bear.1” 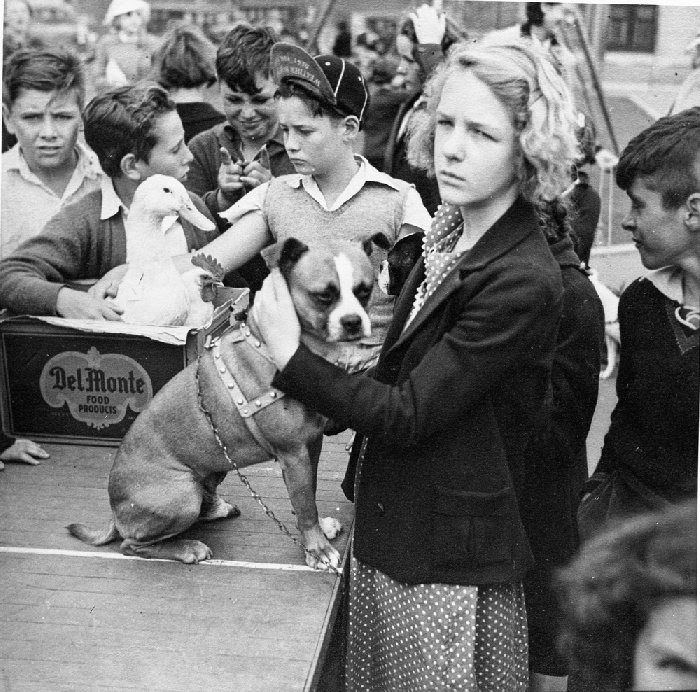 Girl with dog, boys with duck and rooster at Children’s Pet Exhibit at Argonne Playground, 1940s. (wnp26.1561; Courtesy of a Private Collector)

The PPIE children’s pet show proved to be very popular. As a result, city educators and the Society for the Prevention of Cruelty to Animals (“SPCA”) worked together to make it an annual event. By the early 1920s, the annual Children’s Pet Exhibition was getting hundreds of entries. 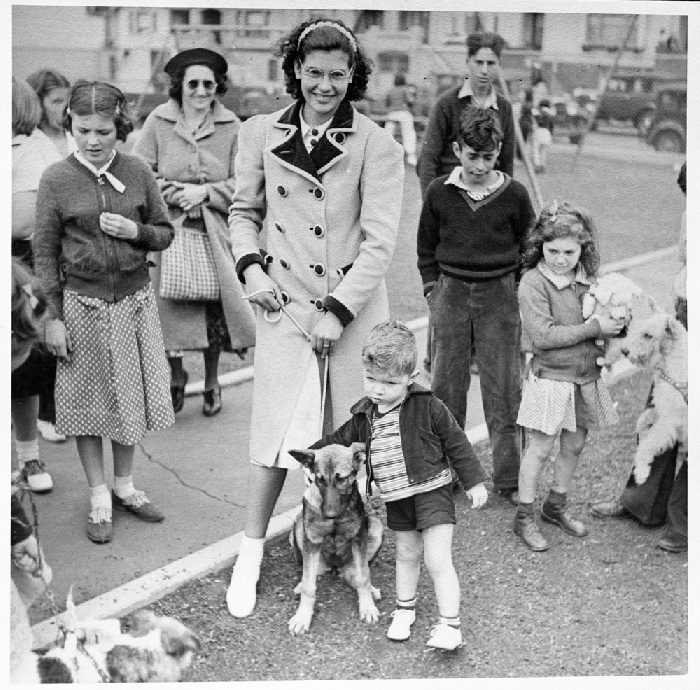 Women and children with dogs at Argonne Playground, 1940s. (wnp26.1564; Courtesy of a Private Collector)

The annual Children’s Pet Exhibition featured a number of prizes and cup winners, such as Best Trained and Best Stunts, and continued to include all kinds of different pets. In a number of years, the Boy Scouts had and received commendations for an exhibition on how to give aid to animals. The show also had visitors vote on their favorite pets for their seven loving cups awards. In 1929, the Frank McCoppin School was awarded a silver cup for promoting love of animals. 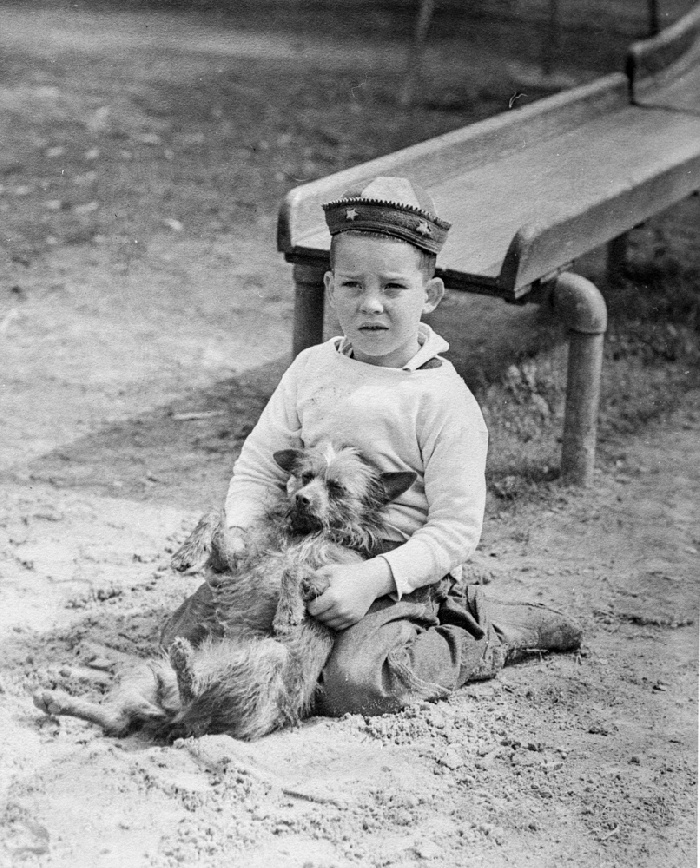 Over the years, the pet show occurred at a number of locations around the City, everywhere from the Dreamland Auditorium to the Larkin Auditorium to the Civic Auditorium. Rehearsals for the event were held at some schools. As we have been celebrating the 100th anniversary of Argonne Elementary School, we have been spending time reviewing the images we have of the school. Among these, we have a number of children and their pets at the Argonne Playground images. 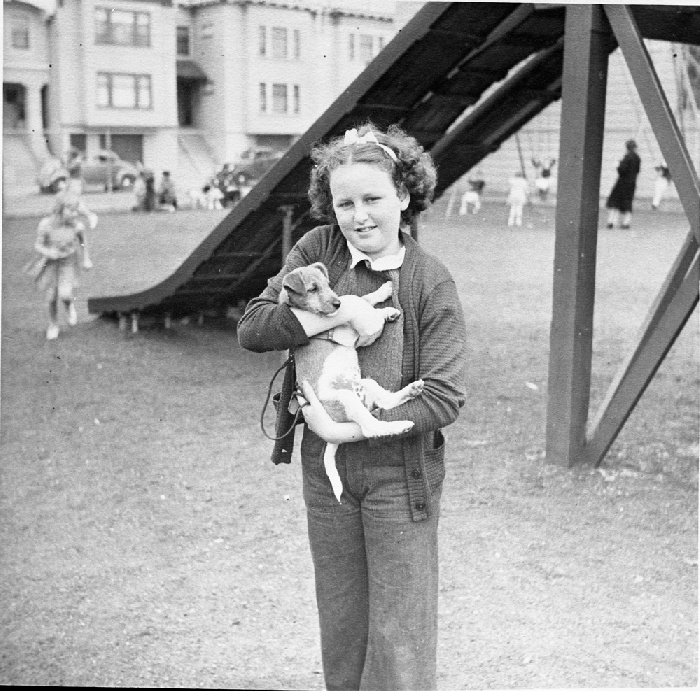 Girl and her dog in front of slides at Argonne Playground, 1940s. (wnp26.1562; Courtesy of a Private Collector)

Argonne not only participated in the annual Children’s Pet Exhibition for many years, but they also held rehearsals at the Argonne Playground in some years. The images in our collection are from one of these rehearsals, though the exact year and the photographer are unknown. From vehicles in the background of the images, our best guess is that this rehearsal took place in the 1940s. However, rehearsals were held at Argonne as early as 1925. 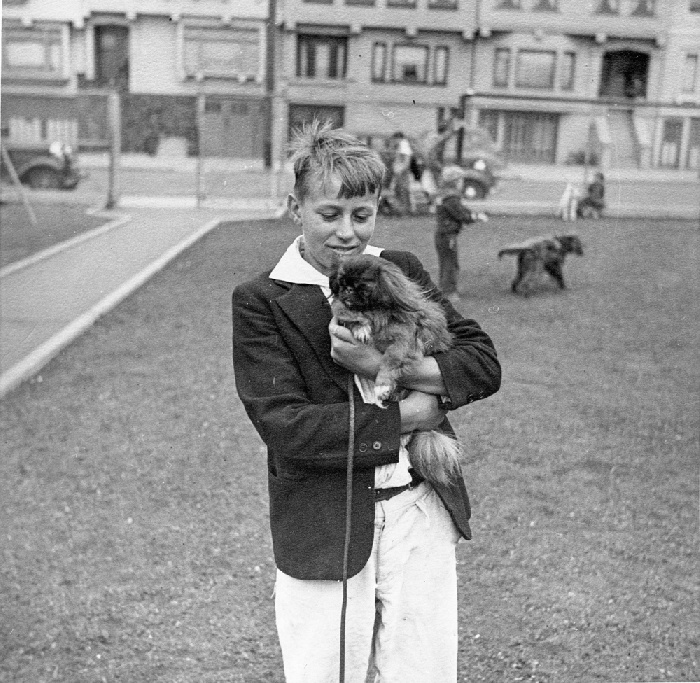 It is clear from these images that dogs were the dominant pet species at the particular Children’s Pet Exhibition rehearsal featured here, though the duck and rooster in the Del Monte box in the first image above provided some variety. Maybe the City’s pet shows didn’t have the fighting guinea pigs, burro, or bear that the PPIE pet show had, but we’re certain that there was more than just dogs, ducks, and roosters. The Children’s Pet Exhibitions no longer happen, another civic event that has gone by the wayside. However, if you ever participated in one of these exhibitions, we would love to hear from you. If you have a Children’s Pet Exhibition story to share, contact us.