Presiding over the east end of the Music Concourse, the Francis Scott Key Monument is one of the largest monuments found in Golden Gate Park. However, where you see it today is not its original location and it had a bit of a troubled history before it found its way there.

The Key Monument was a gift to San Francisco from James Lick. One of the richest men in California, Lick died on October 1, 1876. In his trust, he set aside $60,000 for a monument to Francis Scott Key in Golden Gate Park to honor the composer of the Star Spangled Banner. It took over eight years before William Wetmore Story was awarded a contract to build the monument in February 1885. Story created the monument in Italy over the next two years before having it shipped to America in numbered pieces. 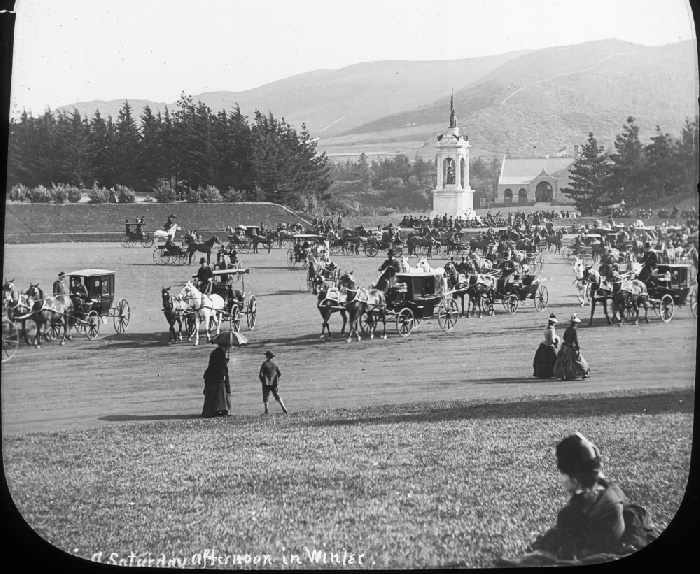 Story’s travertine monument featured a sitting Key on a large base that has verses from the national anthem on it. Above the four archway views of Key stands a flag-holding Columbia with eagles on each corner. The monument stood 51 feet tall. There was discussion of several sites for the monument–atop Strawberry Hill and at the Haight Street entrance for two–before the City settled on a spot near where the new music stand was to be built. 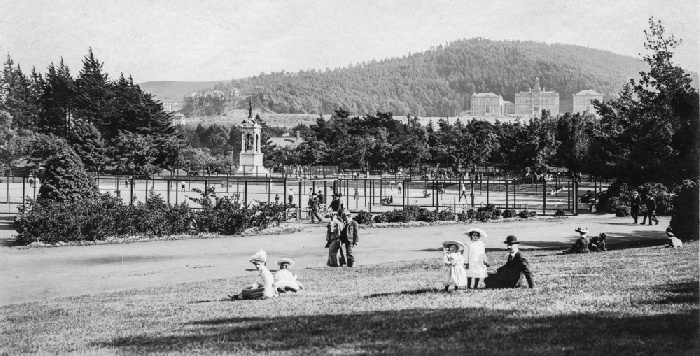 Both the Key Monument and the new music stand were unveiled in a big dedication on July 4, 1888. Mayor Edward B. Pond accepted the monument from the Lick Trust at the ceremony attended by more than 10,000 people. A military band played, the National Guard gave a 100-gun salute, and the crowd sang the Star-Spangled banner naturally. In his remarks, Pond declared: ” It has fallen to the lot of San Francisco, through the generosity of one of its citizens, to be the first to do honor to [Francis Scott Key’s] name by the erection of a monument to his memory.1”

Despite the dedication of the Key Monument, Story had not been fully paid for his work. The Lick Trustees had expected several bronze bas reliefs on the pedestal, one depicting the battle of Fort McHenry (the inspiration for Key writing the Star Spangled Banner) and another depicting a choir singing the anthem. Story had put slabs with inscriptions of the anthem on the base of the monument instead. Apparently the bas reliefs were not considered works of art under U.S. law and could not be brought to San Francisco duty-free, so Story, who had complete artistic discretion on the project, changed the concept slightly.2 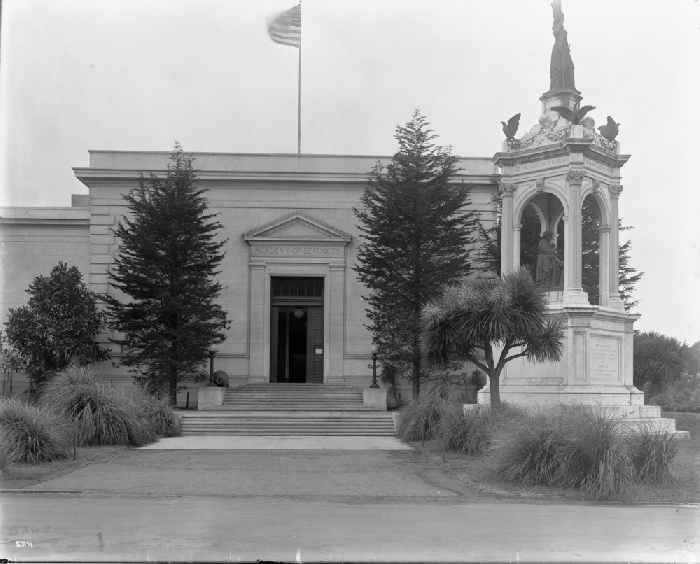 Academy of Sciences and Francis Scott Key Monument, circa 1920. (wnp26.237; Courtesy of a Private Collector)

However, the Key monument’s first location became temporary for the same reason that many other things changed in San Francisco. On April 18, 1906, the Key Monument, like much of San Francisco, was heavily damaged by the earthquake. Further, in the 18 years since the dedication of the Key Monument, trees had grown up around its location and it was decided that the placement was no longer sufficiently prominent. In January 1908, the Park Commissioners took a drive through the Park to pick a new spot for the Key Monument and decided on a spot on the south side of the Music Concourse. 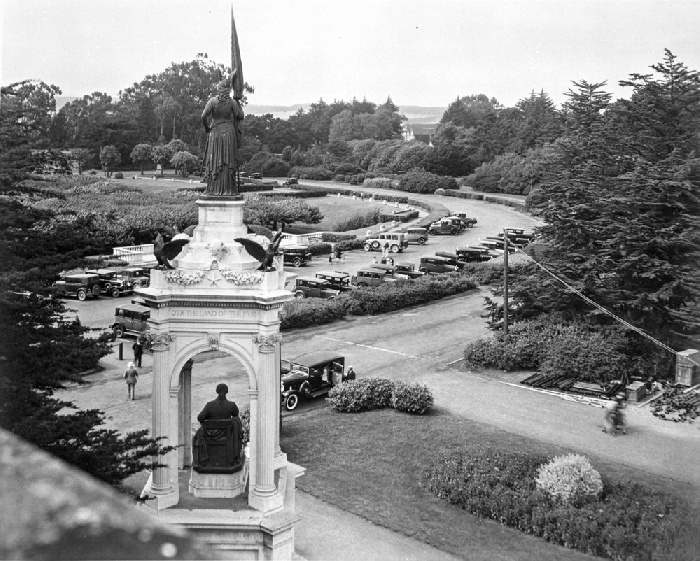 Music Concourse and Francis Scott Key Monument from roof of the Academy of Sciences, circa 1930. (wnp37.03334; Marilyn Blaisdell Collection / Courtesy of a Private Collector)

In March 1908, the McGilvray Stone Company was hired to move the Key Monument to the new location on the Music Concourse. The restoration of the monument would continue into 1909. In 1916, the California Academy of Sciences moved into the North American Hall of Birds and Mammals by the Key Monument. The Academy expanded with the addition of the Steinhart Aquarium in 1923, the Simson African Hall in 1934, a Science Hall in 1951, and the Morrison Planetarium in 1952.

The Key Monument was moved again in 1967 to make room for further expansion of the Academy of Sciences, this time into storage at the Park’s Corporation Yard. It would sit there for 10 years. Raymond Clary, who literally wrote the book on how the Park was created,3 fought to get the monument back on display in the Park. On the 89th anniversary of its original installation, the Key Monument was rededicated on July 4, 1977 at the east end of the Music Concourse. Five days later, on July 9, 1977, it was designated as San Francisco Landmark #96.

You can learn more about the Key Monument in the Outside Lands Podcast we did on it. It remains there today and recently received a $140,000 renovation. Earlier this year, a ferris wheel was partially constructed behind it for Golden Gate Park’s 150th anniversary, though construction was halted due to the pandemic shelter-in-place requirements. Maybe the Key Monument’s wandering days are now over, but only time will tell.