The 95th anniversary of the opening of Fleishhacker Pool occurred earlier this week and certain images of the pool reminded me that we occasionally come across pictures of people in boats around the City. With San Francisco surrounded on three sides by water, you typically see images of boats on the Bay or the Ocean. You don’t often think about boating in the City itself, but there were a surprising number of spots where boats once roamed here. 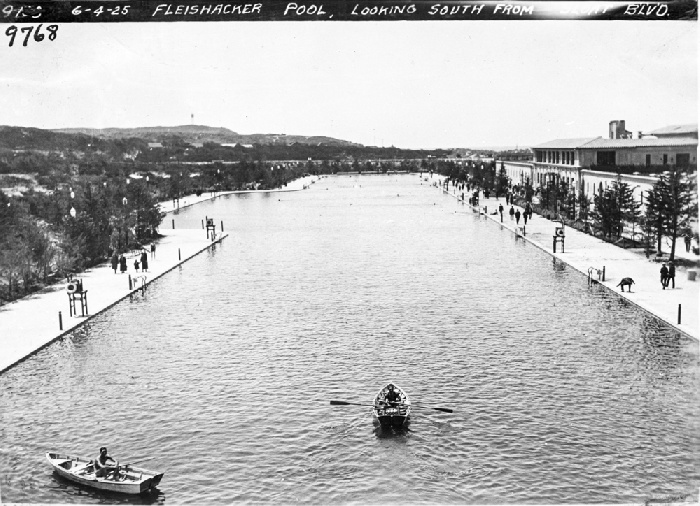 We start with this week’s anniversary. Fleishacker Pool was so large, 1000 feet long by 150 feet wide, that lifeguards patrolled it in rowboats as seen in the image above. The pool opened on April 23, 1925 with AAU swimming, diving, and water polo championships, then opened up to the public for swimming. At the time it opened, it was the largest swimming pool in the United States. Water was pumped into the pool from the Pacific Ocean and though heated, most swimmers still found the pool waters chilly. It closed in 1971 and was later filled in and paved over for the San Francisco Zoo parking lot. We imagine that patrolling the pool in rowboats was a decent workout for the life guards. 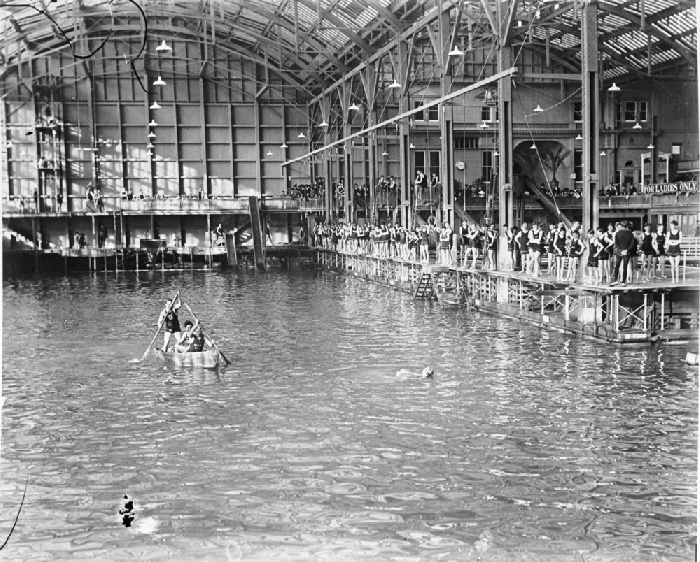 There was another swimming pool where rowboats sometimes roamed. The Sutro Baths officially opened on March 14, 1896, though it had hosted a variety of events for two years prior to that. Located just to the north of the Cliff House at Lands End, it had seven pools of various sizes and heated to various temperatures. We are uncertain why the rowboat in the image above was at Sutro Baths. But it was not a unique happenstance. 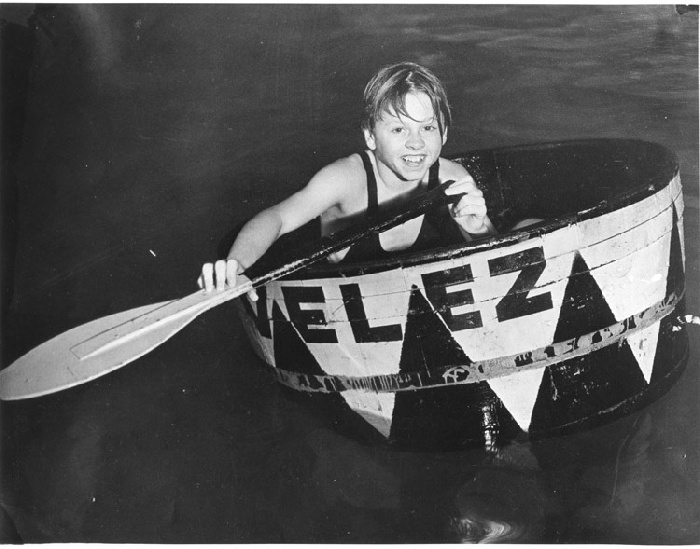 Do you recognize the face in the image above? Your eyes are not deceiving you. That is actor Mickey Rooney when he was a boy paddling a tub around the Sutro Baths. We have another image with kids paddling tubs around the Baths, so Mickey wasn’t the only one. We’re not sure how often tubs and rowboats were allowed in the Baths, but clearly it happened a number of times. 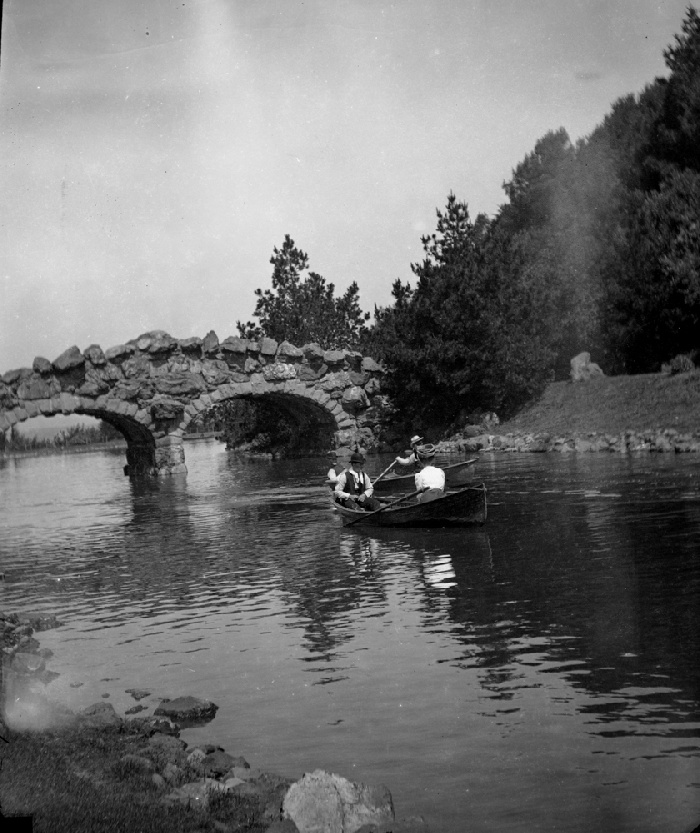 The place where you are mostly like to see boats in the City today is Stow Lake surrounding Strawberry Hill. It is a man-made lake that was created in time for the 1894 Midwinter Fair and included a boathouse. It was named for W.W. Stow, who contributed $60,000 to build it. As can be seen in the image above, rowboats were once routinely used at Stow Lake. We have a number of Stow Lake rowboat images in our OpenSFHistory collection. There’s a canoe or two on Stow Lake in the collection as well. The original boathouse burned down in 1937 and a new, smaller boathouse was built in its place after World War II. Today, you mostly see pedal boats at the boathouse, though you can still rent rowboats there. 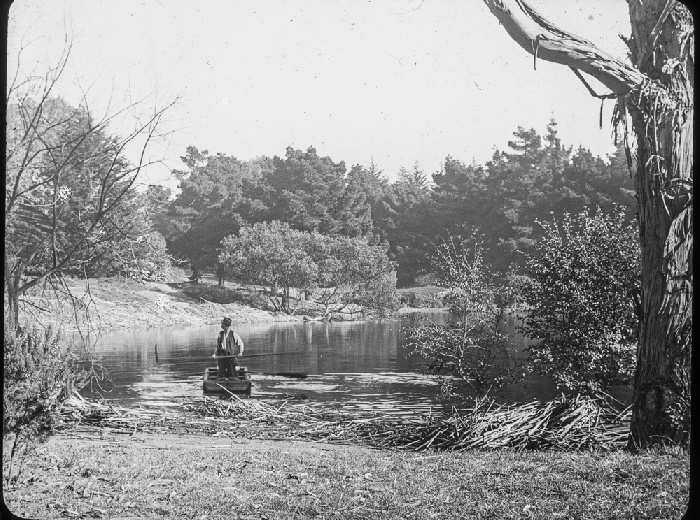 Golden Gate Park has a number of other lakes, some originally natural and others artificially created. Three of the original natural lakes are now known as the Chain of Lakes on the western side of the Park, although they now have a pump system that feeds water through the chain. Individually, they are known as North, Middle, and South Lake. You can probably figure out how those names came about. Now, the Chain of Lakes are mostly known for the birds that live there, but as the 1910s image above shows, boaters once spent some time on at least South Lake. While we don’t have images to prove it, we would guess people took boats out on other Golden Gate Park lakes like Metson Lake, Mallard Lake, Elk Glen Lake, and Lloyd Lake back in the day. 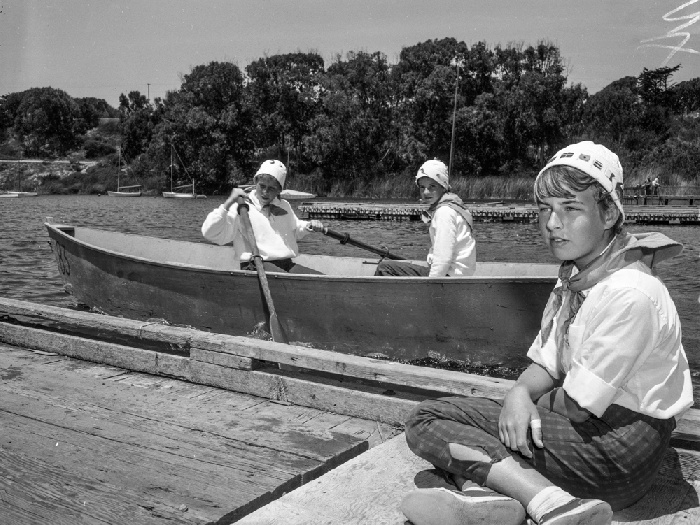 The largest lake in San Francisco is Lake Merced and it also has a boathouse, which was renovated six years ago. Boats on Lake Merced were surely happening long before the lake was part of the City. Lake Merced was christened by Spanish explorers in 1775. The Spring Valley Water Company bought the water rights to the lake in 1868 and supplied water to San Francisco until being bought out by the City in 1930. Today, several rowing clubs store equipment there and one can get boating lessons if one wishes to learn how. We don’t know if the girl scouts in the image above were getting lessons or had a club there, but they look like they are enjoying themselves. 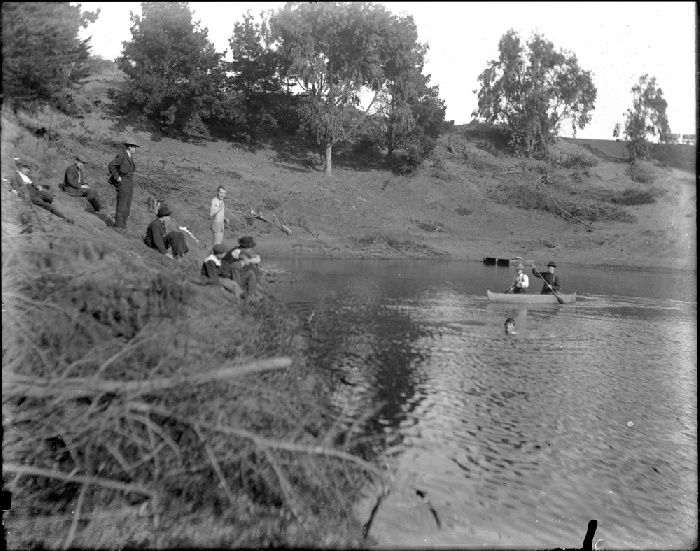 Just to the north of Lake Merced and to the west of Stern Grove is Pine Lake. It is fed by the same aquifer that feeds into Lake Merced. Pine Lake was also sometimes referred to by the delightful names Mud Lake or Pig Lake back in the 1800s and maybe into the early 1900s. Back in the days before people worried about such things, local kids would head to Pine Lake for swimming, diving, and boating. Ten years ago, James O. Clifford wrote about his childhood days and a near death experience there. The image above is circa the early 1900s and Clifford escaped death there in the World War II era. So boating on Pine Lake went on for a long period of time, though you don’t see it there anymore. 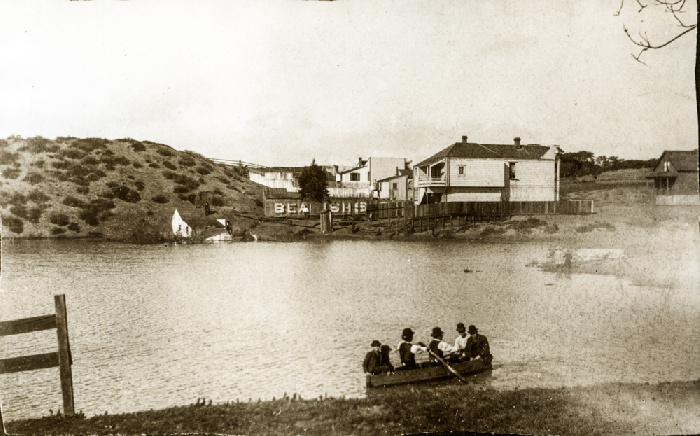 The body of water in the image above is one that most people are unaware of as it does not exist anymore. Kelly’s Pond was located in the area just to the north of Geary Boulevard at Parker Avenue. When we first came across this image, we only had a general idea as to its location. It took some great detective work by WNP Member Andrew Milhailovsky to figure out exactly where it was. You can hear the whole story of how he cracked this mystery in our Kelly’s Pond Outside Lands Podcast. It was not very big, but big enough that people would occasionally bring boats out on it. 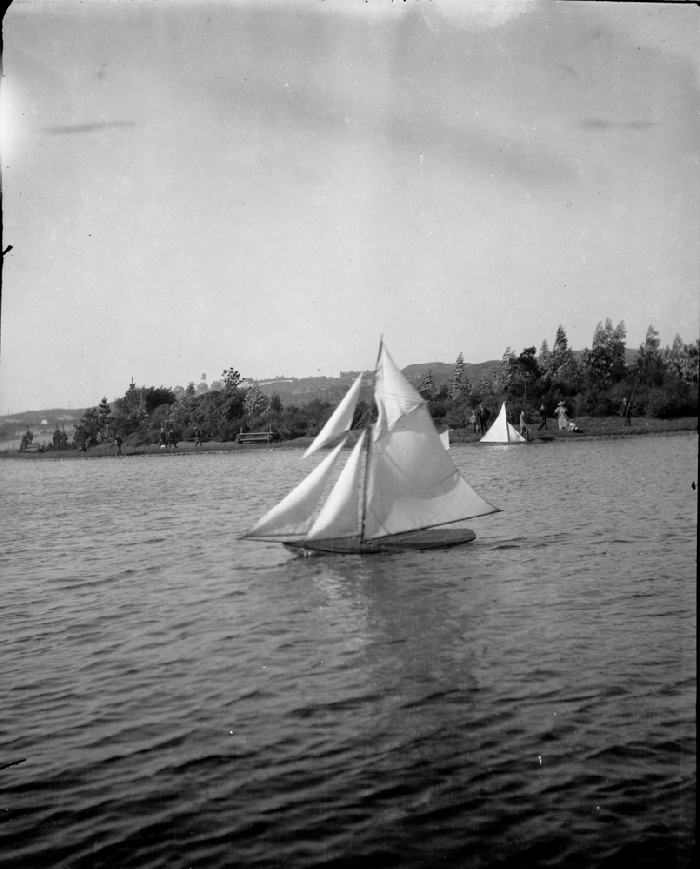 We close by heading back to Golden Gate Park for a different kind of boat. Spreckels Lake, located near where 36th Avenue enters the Park, is an artificial lake built for a specific boating purpose. Construction of Spreckels Lake was completed in 1904 so that model boaters could use it. A clubhouse for the San Francisco Model Yacht Club was built to the west of the lake and model sailboats and power boats have used the lake for over 100 years. You can hear the history of the Model Yacht Club in our our Outside Lands Podcast about it. You can see the model boats on Spreckels Lake nearly every day when the weather is good.