With protests around the country over the deaths of George Floyd in Minneapolis, Breonna Taylor in Louisville, Ahmaud Arbery in Georgia, and too many others to list, we are reminded that there is a long history of protest against unchecked violence, oppression, and racial injustice here in San Francisco. The fact that these civil rights protests are still happening today show that much remains to be done. So to gain context, we look to the past. Like today’s protests, San Francisco marched and rallied on March 15, 1965 as part of a nationwide outcry after a death. 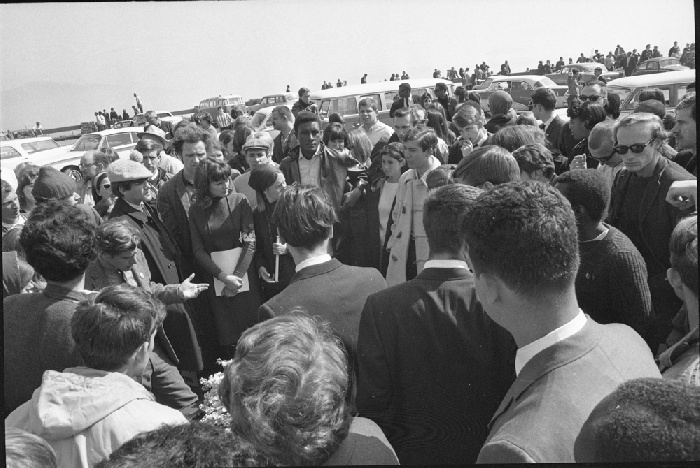 On Sunday, March 7, 1965, the first Selma-to-Montgomery civil rights march occurred. The Southern Christian Leadership Conference (SCLC) organized the march to defuse tensions after the murder of activist Deacon Jimmie Lee Jackson by an Alabama State Trooper at a February 26, 1965 march and to bring attention to their voting rights efforts. The peaceful march was marred by state troopers and “possemen” attacking the marchers on the Edmund Pettus Bridge with clubs and tear gas, an event that would come to be known as Bloody Sunday and was depicted in the movie, Selma. 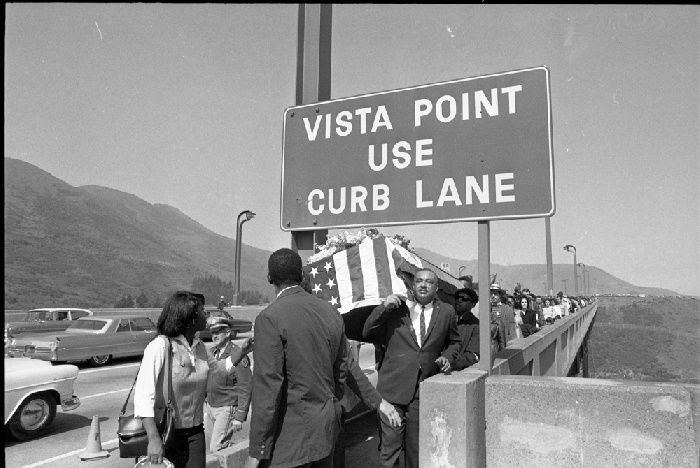 In the wake of Bloody Sunday, Martin Luther King, Jr. and the SCLC leadership organized a second Selma-to-Montgomery march for Tuesday, March 9, 1965 and called for clergy around the country to join them. Reverend James J. Reeb, a white Unitarian Universalist minister in Boston was one of many clergy who heeded the call and came to Selma for the march. However, a federal judge issued a restraining order prohibiting the march until he could hold a hearing on the issue the following week. Dr. King therefore led a march back to the Edmund Pettus Bridge where they held a prayer session before turning back and returning to Selma, a protest that became known as Turnaround Tuesday. 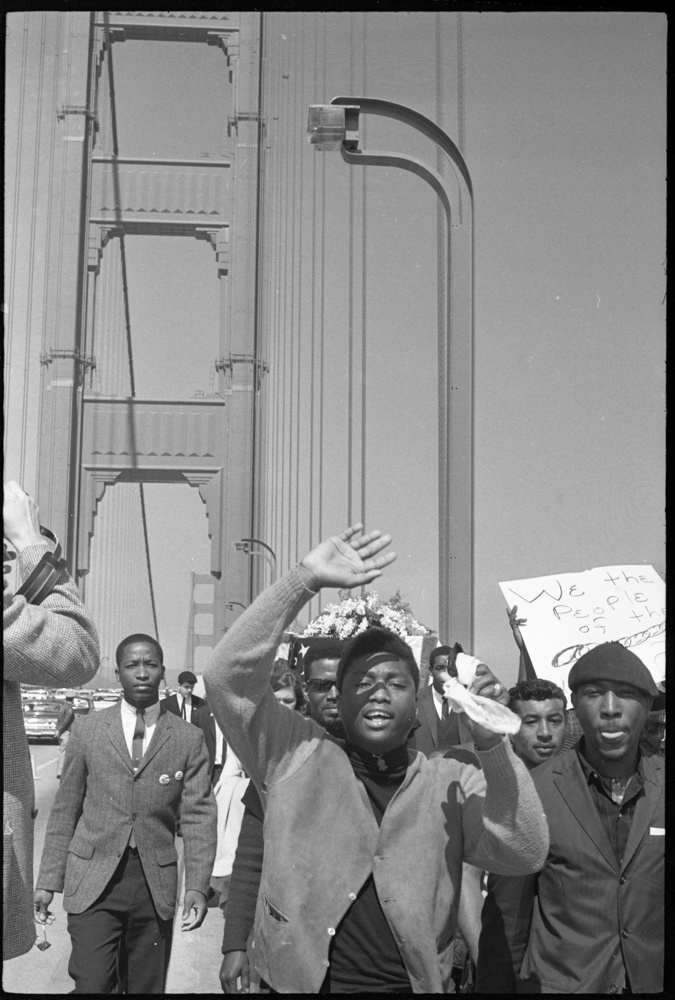 On the evening of March 9th, Rev. Reeb and two other Unitarian ministers had dinner at an integrated restaurant in Selma. After dinner, the three began walking to an SCLC meeting when they were brutally attacked by four KKK members with clubs. Rev. Reeb suffered severe injuries, went into a coma, and died two days later. 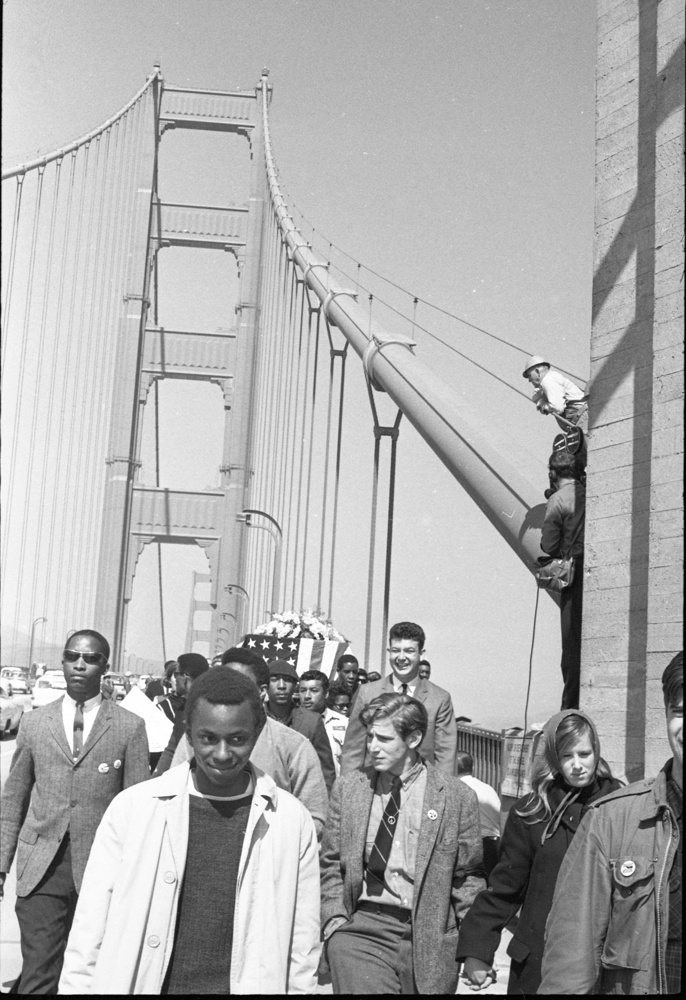 As with the death of George Floyd, the death of Rev. Reeb at the hands of white supremacists shortly after the death of Deacon Jackson by state troopers sparked a national outcry. A memorial service for Rev. Reeb was held on March 15, 1965, at which Dr. King eulogized him saying that he was “a martyr to the cause of human rights.1” That same day, people across the country marched to protest Rev. Reeb’s murder and police oppression.

Not everyone was happy that it was Rev. Reeb’s murder that sparked the nationwide protests. Stokely Carmichael, then with the Student Nonviolent Coordinating Committee, noted that ideally people should be upset when anyone was murdered by the police or others seeking to oppress them, but that it shouldn’t have took the murder of a white person for it to be recognized. Many felt that the murder of Deacon Jackson was being overlooked in favor of focusing attention on Rev. Reeb. 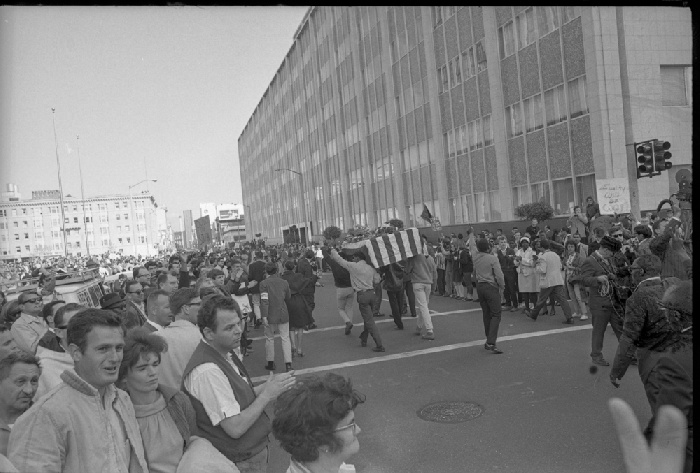 Protesters gathering in front of State of California Building on Golden Gate Avenue, March 15, 1965. (wnp14.12259; Courtesy of a Private Collector)

In the Bay Area, approximately 750 people gathered at the Golden Gate Bridge vista point on the Marin side. From there, they marched across the eastern side of the bridge carrying a mock coffin draped with an American flag. The CHP blocked off the lane closest to the sidewalk and stationed officers about every 75 feet2. 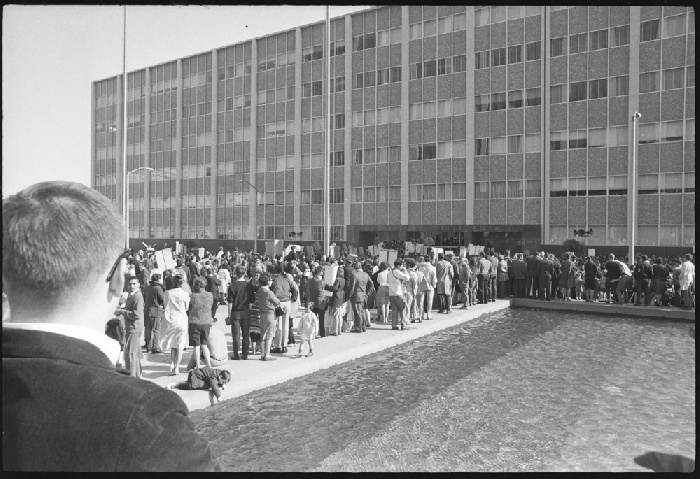 After crossing the Golden Gate Bridge, the protesters headed for the Federal Building, where a rally was held in the afternoon. The entire block of Golden Gate Avenue between the Federal Building and the State of California building filled with protesters and spilled out into surrounding streets. At the time, the federal building featured pools of water in the entrance plaza. Initially, protesters surrounded the pools, but eventually some began splashing around in the pools with protest banners. 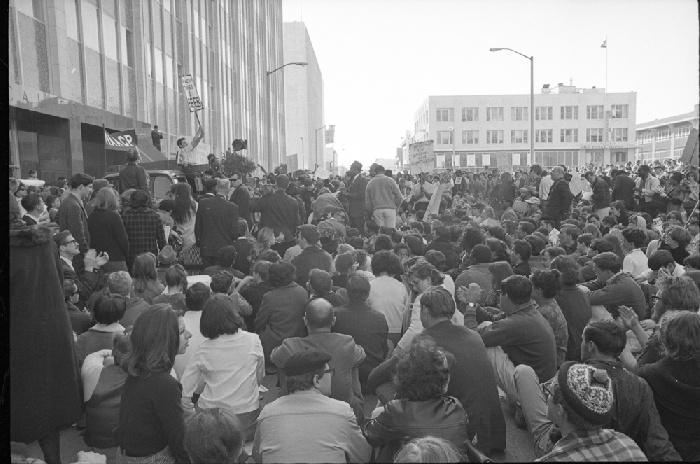 Among the speakers at the Federal Building rally was Richard Bancroft, the president of the local NAACP chapter, who said: “[t]here is no place more appropriate than the Federal Building, now that the attention is focused on the government to prevent what is happening in Selma.” Other speakers included Mario Savio, the leader of the Free Speech Movement, and Reverend Donald Gonung of the Good Samaritan Church, who had been in Selma for the marches. 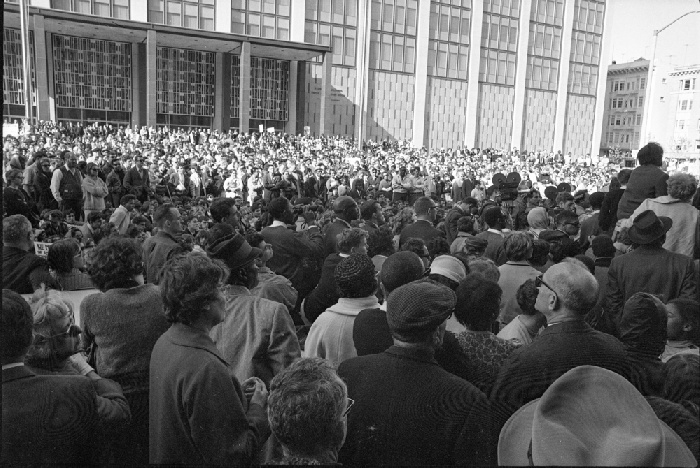 After the rally at the Federal Building in the afternoon, another rally was held at the Ferry Building in the evening. Those protesters than marched up Market Street to the Civic Center. The San Francisco marches and rallies were part of many across the country that day. In the wake of this nationwide outcry, President Lyndon Johnson sent the proposed Voting Rights Act to Congress that evening. It would be passed by Congress that summer and signed into law by President Johnson on August 6, 1965. That was a start, but as today’s protests prove, there is still much to do.