June 5th was the anniversary of one San Francisco’s uglier incidents. On June 5, 1958, a cross was burned at the home of San Francisco assistant district attorney Cecil F. Poole. If, however, your knowledge of Poole is limited to hearing about the cross-burning, then you need to hear about the remarkable career of one of San Francisco’s most distinguished lawyers.

Poole was born on July 25, 1914 in Birmingham, Alabama, but his family moved to Pittsburgh, Pennsylvania when he was young and remained there for his entire childhood. Poole’s mother was very active in the local chapter of the NAACP there. After graduating high school, he went to the University of Michigan, getting his B.A. there in 1935 and a law degree in 1938. The following year, he obtained a Masters of Law degree from Harvard Law School 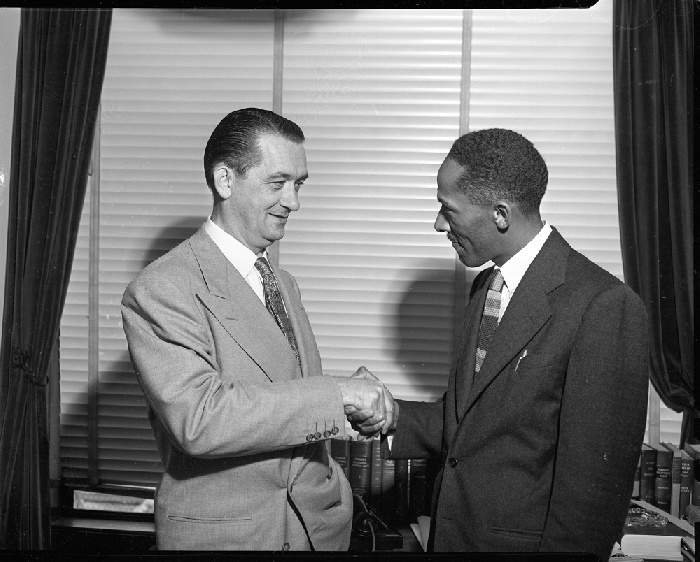 Poole initially moved back home to practice law in Pittsburgh, but in 1942, he was hired by the National Labor Relations Board (“NLRB”) in Washington, D.C. Poole also married Charlotte Crump, who was an editor at the Pittsburgh Courier, that year. The NLRB job was short-lived, however, as World War II was raging then and Poole enlisted and eventually served in the Judge Advocate General’s office at the base for the Tuskegee Airmen1. After the war, he worked briefly as the Chief of the Appellate Division of the Office of Price Administration in San Francisco before beginning private practice here in 1947. He and Charlotte also welcomed their first child, a daughter named Gayle, in 1947.

On April 18, 1949, San Francisco District Attorney Edmund G. “Pat” Brown appointed Poole as an Assistant D.A., making Poole the first African-American D.A. in San Francisco2. Poole served in the D.A.’s office until 1958. He also taught courses at the Golden Gate University School of Law and served terms as President of the San Francisco chapters of the National Urban League and the NAACP during that time. The Poole family had a second daughter, Patti, in 1952. 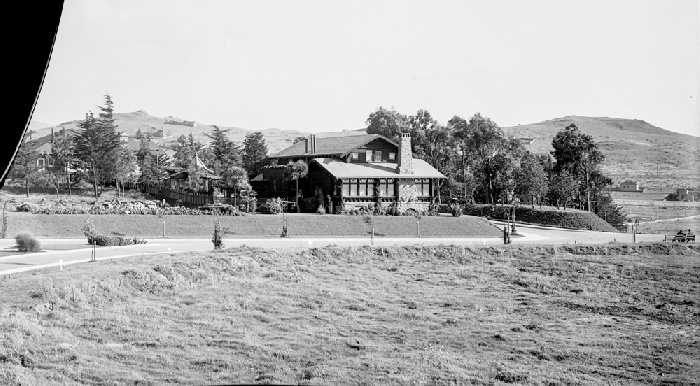 In November 1957, the Pooles purchased a house in Ingleside Terraces. Not just any house, but 90 Cedro Avenue, the original showpiece home built in 1912 by Joseph Leonard when he developed Ingleside Terraces. Like most of the exclusive subdivsions that were built in the early 1900s in the Outside Lands, Ingleside Terraces included racial covenants that prohibited owners from selling their homes to people of color. Although racial covenants were struck down by the U.S. Supreme Court in the 1948 seminal case of Shelley vs. Kraemer, the Pooles were unable to find a realtor to help them find and buy a home in the Ingleside Terraces area. They were forced to search for a home without realtor help and ended up purchasing directly from the prior owner of the Joseph Leonard house3. They were the first African-American family to live in Ingleside Terraces.

About seven months after moving into their new home, the Pooles awoke on Thursday, June 5, 1958 to find a burned cross on their lawn. The cross was found by 6-year-old Patti when she went outside to wait for her father to take her to school4. Poole told police that he was sure none of his neighbors were involved, while his wife told reporters that there had been resentment when they moved in, but no friction. Several teenagers later confessed to the cross-burning, claiming it was just a prank5.

Pat Brown was elected governor of California in 1958. Brown hired Poole to be his Clemency & Extradition Secretary, stating “I am grateful that a man of Poole’s experience and intelligence has consented to serve in this exacting assignment6. In that position, Poole investigated death sentence cases and advised the governor on whether to grant clemency. Poole was the first African-American to serve on the staff of a California governor.

After a nomination by Governor Brown and a recommendation by U.S. Attorney General Robert Kennedy, Poole was appointed as a United States Attorney for the Northern District of California by President John F. Kennedy on April 15, 1961. Poole was approved by the Senate Judiciary Committee on June 6, 1961 and he was confirmed by the full Senate the following day. In what had become a recurring theme, Poole was the first African-American to serve as a U.S. Attorney in the continental United States. In his position as a federal lawyer, Poole became friendly with both Kennedys. When Bobby Kennedy would come to San Francisco on government business, Poole would typically meet him at the airport.

While Poole was at the A.G.’s office, his wife Charlotte started a committee that worked to establish an African-American archive at the San Francisco Public Library. She also worked as a protocol officer for the City and later served on the Board of Directors for Children’s Hospital and the Board of Overseers for UC San Francisco. 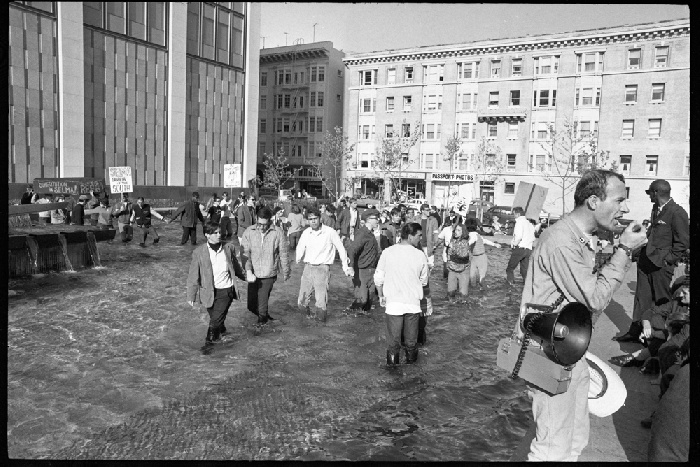 On March 15, 1965, a large civil rights rally gathered at the Federal Building on Golden Gate Avenue to protest the murder of Reverend James J. Reeb and police oppression in Selma, Alabama. Poole was criticized for not appearing at the rally and the pools in front of the building were derisively called “Cecil’s Pools7.”

In January 1968, as Vietnam War protests intensified, five protesters were arrested at the Oakland Induction Center for not having their draft cards on their persons. All five were, in fact, registered for the draft, so Poole intervened, had them released, and declined to prosecute them8, stating “the fact they weren’t carrying their draft cards indicated more a slip of the mind than a deliberate action on their part9.” This decision would be used as justification for blocking Poole’s appointment as a federal judge later that year by Republican California Senator George Murphy. Lyndon Johnson again nominated Poole for a federal judgeship near the end of his presidency, but Richard Nixon withdrew the nomination when he took office.

Poole resigned his U.S. Attorney post at the end of January 1970 to become a University of California Regents Professor of Law at Boalt Law School. Later that year he joined the law firm of Jacobs, Sills & Coblentz. Besides his private practice clients, Poole was an international observer at the trial of Amalia Fleming, Alexander Fleming’s widow, in Greece in 1971, a member of the California Democratic Party’s Credentials Committee during the 1972 presidential primary, chairman of the State Bar’s section on Individual Rights and Responsibilities, and a member of several corporate boards, including Levi Strauss. As the head of a San Francisco section of the American Bar Association, Poole, in August 1972, proposed the legalization of marijuana with the same restrictions as alcohol10. After the kidnapping of Patty Hearst by the Symbionese Liberation Army in 1974, Poole and his firm did some work for Hearst family during that lengthy saga. When Hearst was arrested, Poole was asked by her family at the last minute to represent her at her arraignment, but he could not reach the courthouse in time. 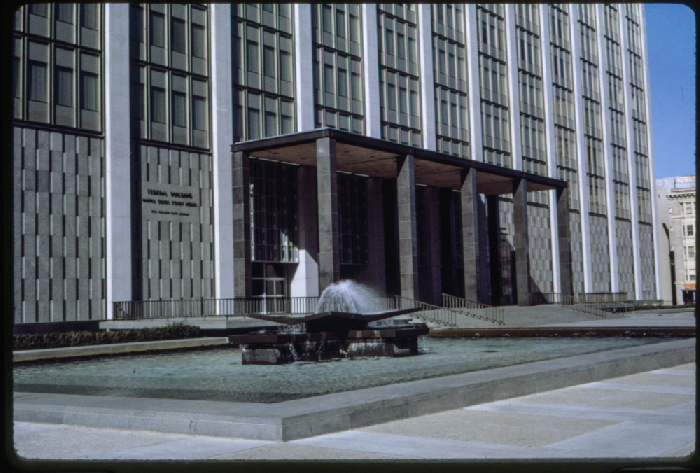 On June 18, 1976, Poole was again nominated to be a federal judge, this time by President Gerald Ford. With a Democrat-controlled Senate at the time, Republicans brokered a deal to fill three vacancies on the Northern District of California bench with two Republican lawyers and Poole, a Democrat. With the backing of both of California’s senators this time, the Senate confirmed Poole on July 23, 1976. He was sworn in on October 5, 1976 and cited Pat Brown’s advice to judges to be kind, understanding, and compassionate. “I would like to be that kind of judge,” said Poole11. Poole’s appointment was another first for him, the first African-American judge in the Northern District of California.

After only three years as a district judge, President Jimmy Carter nominated Poole to the federal appellate court on October 11, 1979. He was confirmed by the Senate on November 26, 1979. Poole was, yes, the first African-American to be a judge on the Ninth Circuit Court of Appeals. During his time on the Appeals Court, Poole wrote a number of notable decisions, including United States v. Rodriguez, where he found that evidence against a criminal suspect should be suppressed because the police had racially profiled the defendant, and In re Larry P., a case where he held that San Francisco schools could not use standardized tests to place African-American children in special education classes.

Poole’s daughter Patti almost followed in his footsteps. She joked that she could say the word “deposition” before she could say the word “daddy.” She worked as a paralegal for many years while getting a Ph.D. in anthropology, then went to law school, and passed the bar exam. However, she elected to not to practice law and opened an art gallery instead.

Charlotte Poole passed away in February 1991. After beginning to feel the effects of Alzheimer’s disease, Poole took senior status on the Court of Appeals on January 15, 1996. Later that year he was named to the Charles Houston Bar Association’s12 Hall of Fame. He would succumb to complications from pneumonia on November 12, 1997.

Poole’s career is marked by being the first African American at virtually every level of state and federal legal office in northern California. However, Poole’s career was not just remarkable because he was the first African-American in these positions, it was remarkable because he was a tremendous attorney, judge, and legal scholar, period. Cecil Poole was a giant of the San Francisco legal community.

1. “Civil Rights, Law, and the Federal Courts: The Life of Cecil Poole, 1914-1997, Oral History Interview with Cecil Poole by the California Digital Library.

8. Ironically, Poole’s daughter Patti would later marry a protester at the Oakland Induction Center who was prosecuted by her father, see I Am OMI Interview with Patti Poole in fn 3 above.

12. The Charles Houston Bar Association was founded in 1955 to provide a forum for African-American attorneys to address issues that affected their work. It officially became a part of the California Bar Association in 1975.