Another Father’s Day has arrived on this third Sunday in June. Perhaps more so this year than in years past, parents have been spending a lot more time with their children as we have quarantined in place for the last three months. As we celebrate this Father’s Day, we are reminded of former President Barack Obama’s admonition about fatherhood: “Any fool can have a child. That doesn’t make you a father. It’s the courage to raise a child that makes you a father.1”

In our nearly 50,000-image collection on OpenSFHistory, we have numerous examples of fathers with “the courage to raise” their children around this great city of ours. We have culled through our collection to find five of our favorites. 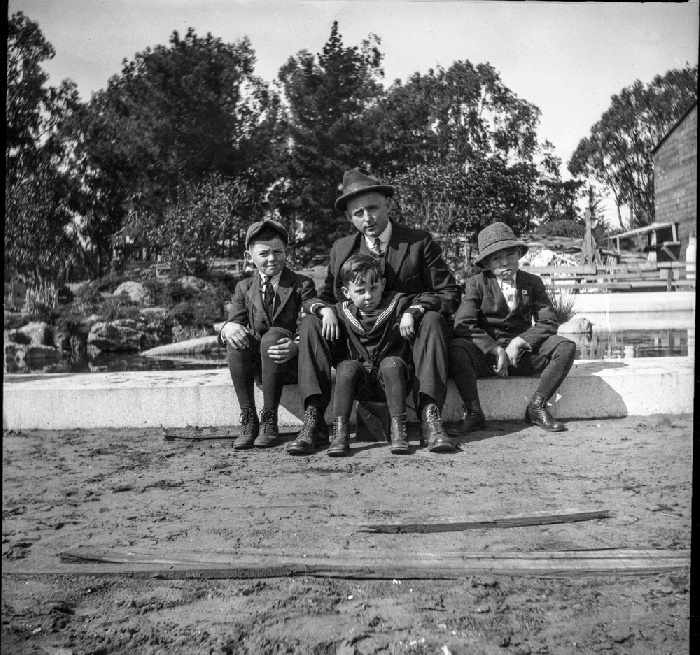 Father and three sons believed to be at Golden Gate Park Pool of Enchantment, circa 1917. (wnp14.4577; Courtesy of a Private Collector.)

Here we see a father and his three sons sitting by a pool that we believe is the Pool of Enchantment in the Music Concourse area, circa 1917. All of them are decked out in their finest duds. As such, we might presume that this is a Sunday post-church outing, but we must remember that in that era, people were in the habit of dressing up when going sight-seeing, be it in Golden Gate Park or Ocean Beach or elsewhere. The boy at right does not look very happy to be there, while the boy at left has a self-satisfied smile as if to say, “I’m glad we got to go where I wanted today.” Dad and his youngest child have matching “let’s get this picture-taking over with” half-smiles. 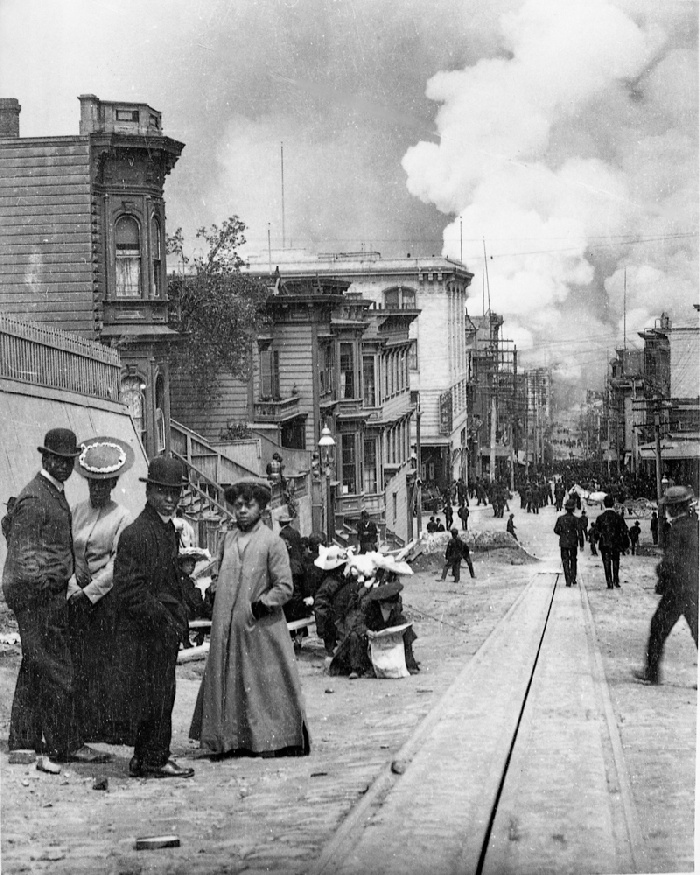 Even in the face of catastrophe, it was important to look your best. During the April 1906 earthquake and fire, thousands of people flooded into the streets to take stock of what was going on. Here, it is not only the family at left–an older father and mother and either their two grown children or one grown child and a spouse–on Sacramento Street, but virtually everybody in the background of this image is looking dapper. Everyone must surely be wondering what will happen to them, but Dad’s confident, cool demeanor surely was reassuring. His son or son-in-law adopted a nearly identical pose, which tells you that Dad has been a big influence in his life. 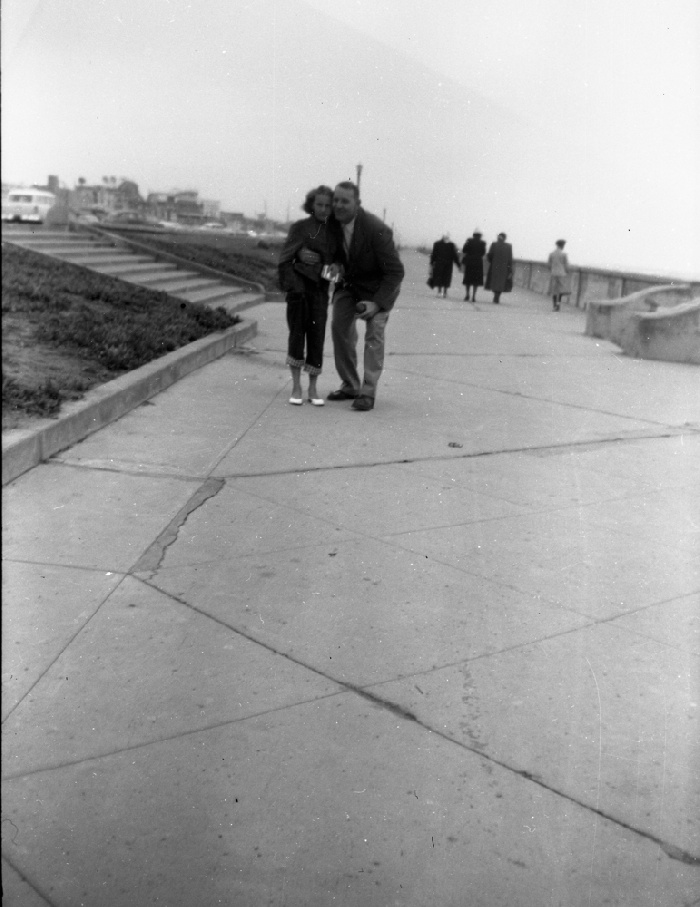 This is the type of family photo you see frequently…a father bent over so that his face is next to his child’s face in the image. From the coats that people are wearing, we can only assume that it was a typical cold, foggy day at the beach. We have several shots of this family from that day in our collection and you see the wind messing with their hair in the images. You can also make out a bit of Playland and the Dutch Windmill in the distance here. We’re betting that this young girl got to have some fun that day at Playland. 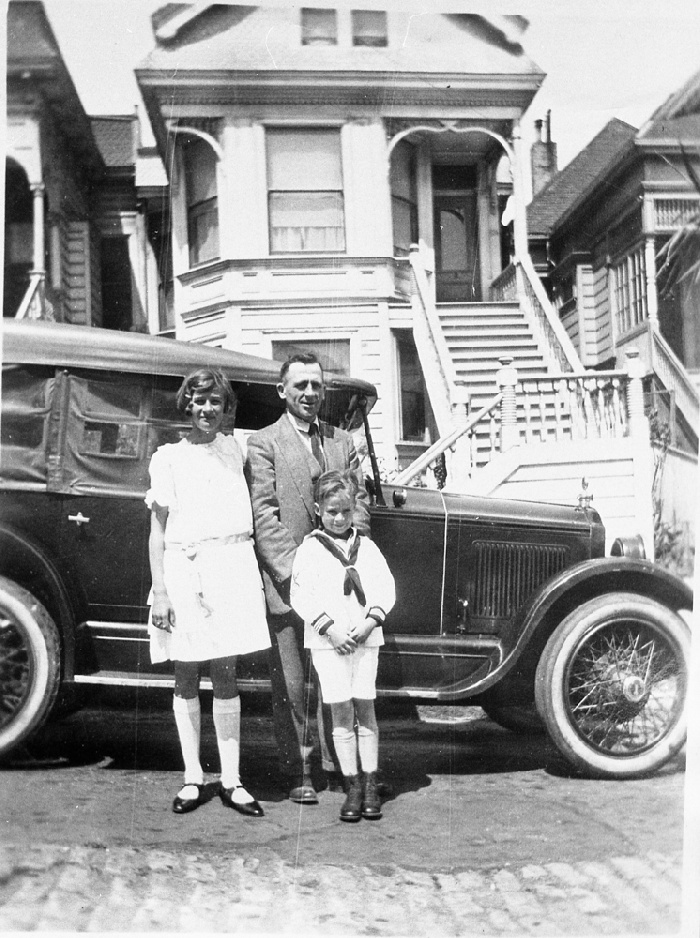 Once again, we have a father and his children dressed up, this time in front of their car on a street in Noe Valley. When you think about it, it is not that surprising to find well-dressed people in old photos. Getting your picture taken 100 or more years ago was not the everyday occurrence that it is now. So you wanted to look your best in the pictures. We love the son’s sailor uniform and the daughter’s lovely dress in this image. Everybody looks quite happy to be on whatever outing they were enjoying that day. 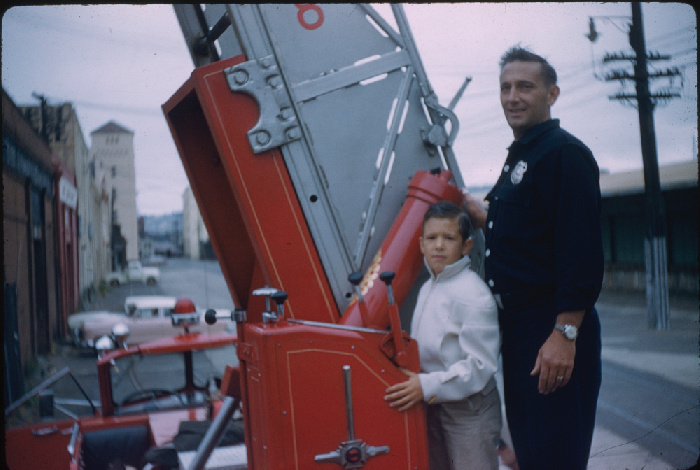 We end with another image from the collection donated by local historian and WNP Board Member Richard Brandi that we featured here a month ago. This image has Richard’s father Andrew showing Richard the control platform for the aerial ladder on firetruck #8 at the station on Bluxome Street where Andrew worked. It has been a rite of passage since the beginning of human kind for fathers to show their sons what they do. Be it hunting and farming thousands of years ago or a job in today’s modern workplace, a father showing his son what it means to work and provide for family has long been tradition. The tradition may have changed over time–today either parent may show their son or daughter where they work–but it has always been a part of growing up.

So today celebrate your fathers, whether they are here for you to visit or just in our hearts and memories. We hope, as President Obama said, that they had the courage to raise you and provide you with a good example to set for your own children.