The San Francisco Lesbian, Gay, Bisexual, Transgender Pride Parade and Celebration (“San Francisco Pride”) turns 50 years old this year. Unfortunately, because of the COVID-19 pandemic, this year’s celebration scheduled for June 27th-28th has been canceled and moved on-line. The annual event has drawn over a million people for the last 13 years and hundreds of thousands for the 30 years prior to that. This year’s 50th anniversary celebration was expected to be another huge gala.

With this year’s festivities going virtual, it is a good time to look back at the first ten years of San Francisco Pride. The images featured here are from the 1974 parade, then called the Gay Freedom Day Parade. San Francisco photographer Greg Gaar attended the event and took many pictures, capturing the joyous festival in all its glory. 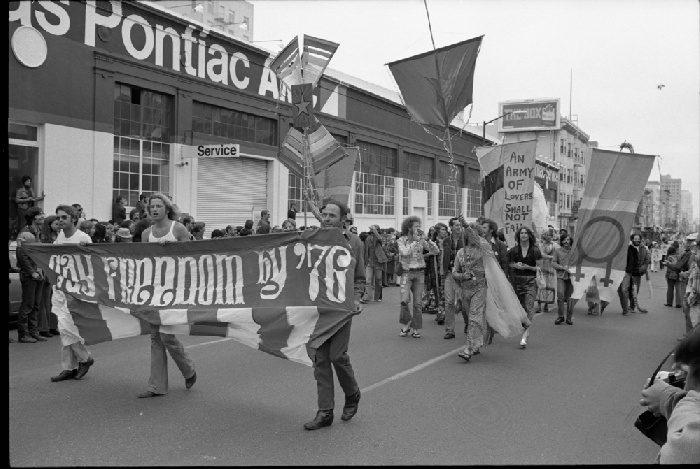 The roots of the San Francisco Pride celebrations are in New York. The spontaneous Stonewall Uprising occurred there in response to a police raid at the Stonewall Inn, a gay bar in Greenwich Village on June 28, 1969. On the first anniversary of Stonewall, marches were organized in major cities across the country. In San Francisco, 30 gays and lesbians marched down Polk Street on Saturday, June 27, 1970. The following day, hundreds of people held a “gay-in” at Speedway Meadow in Golden Gate Park. There was no event in June 1971, but the Age of Aquarius Parade on Folsom Street in August 1971 featured some gay marchers and floats. 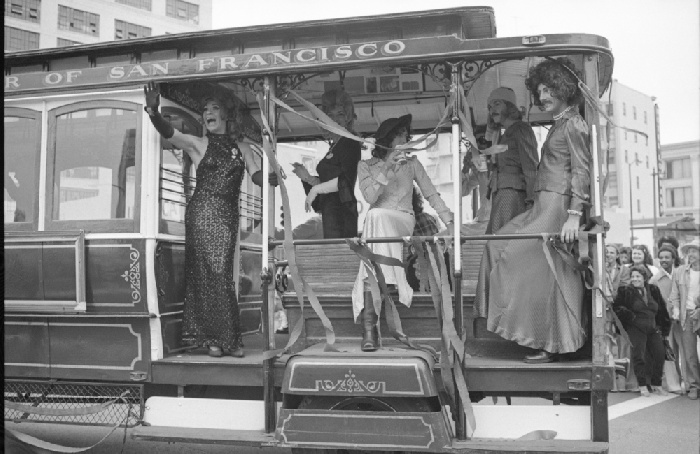 1973 found the parade renamed as the Gay Freedom Parade. On Sunday, June 24, 1973, thousands again marched, this time from Sansome and Post to Lafayette Park. Marchers came from as far away as Southern California.2 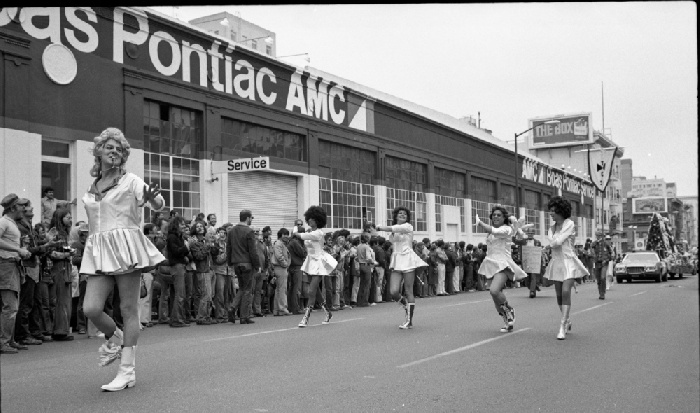 1974’s Gay Freedom Day Parade was the biggest yet, bringing 60,000 people to watch thousands of celebrants. The theme of the June 30, 1974 parade was “Gay Freedom by ’76.” Organizers were seeking an end to job, housing, and other forms of discrimination by 1976.3 For the June 29, 1975 Gay Freedom Day Parade, about 10,000 people proudly marched in front of an estimated crowd of 72,000.4 Amongst the many elaborate floats, one drag queen rode on the back of an elephant. The Chronicle noted that then city supervisor candidate Harvey Milk participated in the parade. 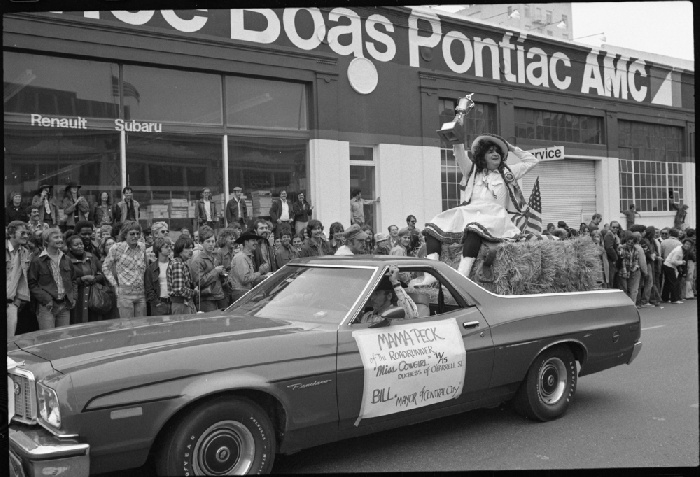 The Gay Freedom Day Parade grew to 90,000 marchers and spectators on June 27, 1976. The parade went down Polk Street to City Hall, then turned onto Market Street and headed for the Castro. There was a separate, smaller Interfaith Bicentennial Parade up Market Street the same day, but there were no issues between the competing marches.5 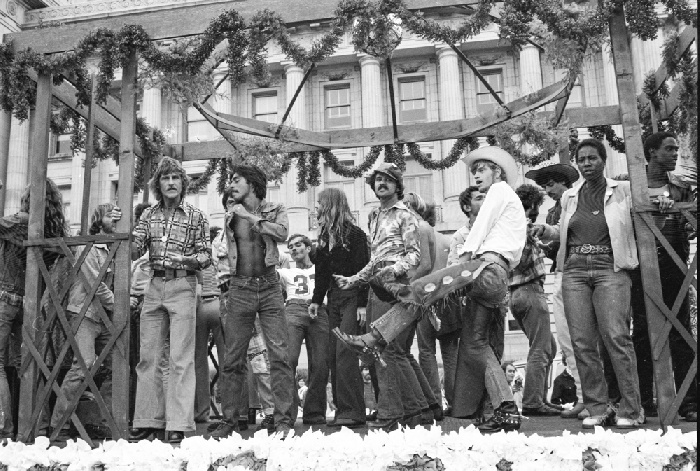 On June 26, 1977, the Gay Freedom Day Parade really became the huge spectacle that it has been ever since. More than 200,000, perhaps as many as 250,000, people took part in the parade down Market Street to the Civic Center for a big rally. Parade officials believed the turnout was a result of the attention that Anita Bryant was getting for her anti-gay crusade in Florida and the murder of a gay city gardener by four youths the prior week.6 Perhaps in recognition of how popular the event had become, the Chronicle story on the parade hit page 1 for the first time and straight local politicians like Willie Brown and Art Agnos took part in the festivities. 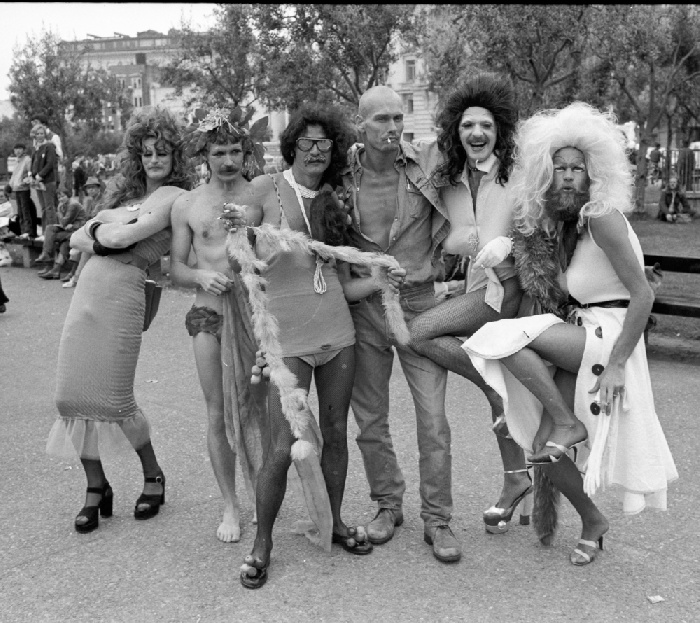 Another huge crowd, estimated at 240,000, turned out for the 1978 Gay Freedom Day Parade on June 25th. Willie Brown urged everyone to register to vote, so they could oppose a statewide initiative sponsored by Fullerton Republican Assemblyman John Briggs that would permit public school districts to fire homosexuals.7 Supervisor Harvey Milk asked President Jimmy Carter to speak up for gay rights. The parade route went down Market Street to the Civic Center again and would continue to be the route up to the present. 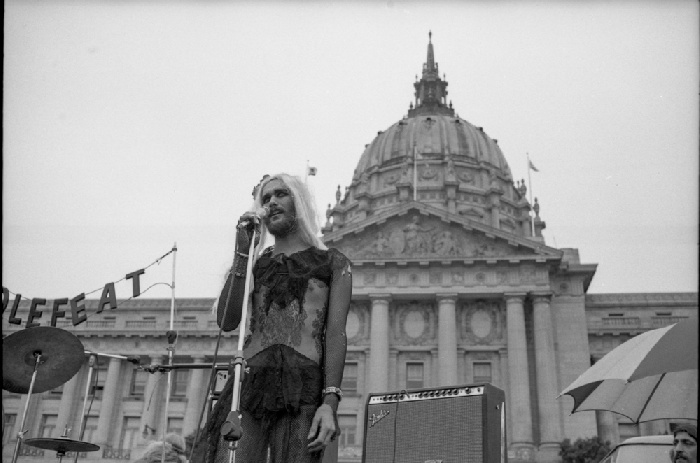 On the 10th anniversary of the Stonewall Uprising, an estimated 300,000 joined the Gay Freedom Day Parade festivities on Market Street and the Civic Center. The June 24, 1979 event was said to be the largest gathering of gay people in history,8 though, even if true, ensuing years would destroy this record. In the intervening year since the last parade, San Francisco had been shocked by the assassination of Mayor George Moscone and Supervisor Harvey Milk by ex-Supervisor Dan White. The parade came just a month after White was only convicted of voluntary manslaughter, instead of more serious charges, sparking the White Night riots. This weighed heavily on the crowd. Supervisor Carol Ruth Silver proclaimed that a “million Dan Whites cannot kill Harvey Milk” because he lived on in all of them. Other speakers criticized the police department’s action during the White Night riots. 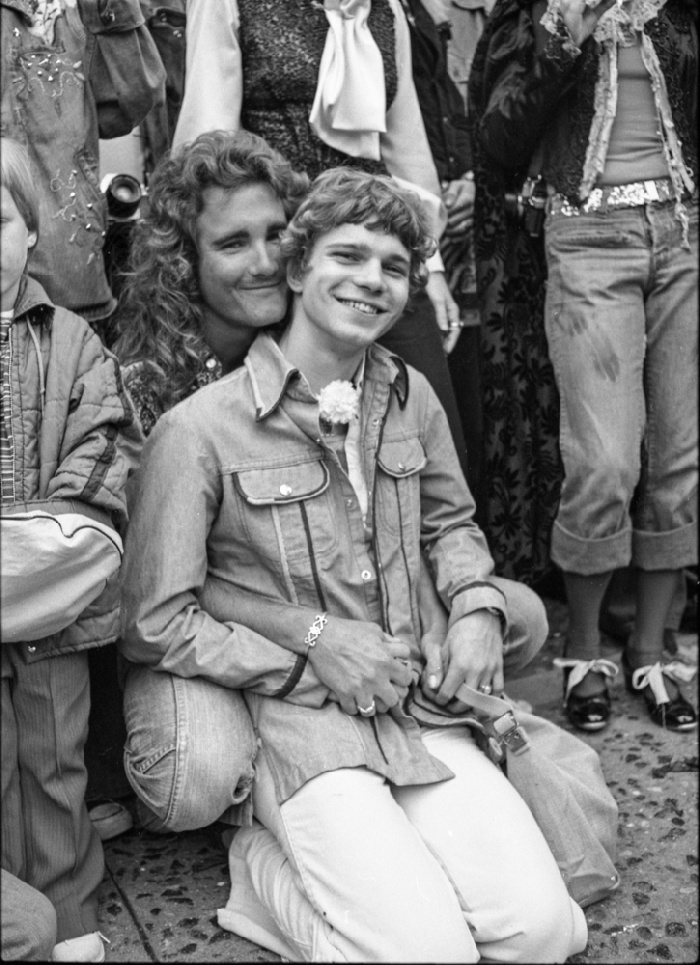 The Gay Freedom Day Parade would continue to grow over the subsequent 40 years with millions of people joining the celebration now. The festival name would change several times, finally becoming today’s San Francisco Lesbian, Gay, Bisexual, Transgender Pride Parade and Celebration in 1995. Although there is no marching this year because of the pandemic, you can join San Francisco Pride’s virtual celebration. You can also view our gallery of 72 images from the 1974 Gay Freedom Day Parade.

The goal of Pride has always been equal rights regardless of one’s sexual orientation. A lot of progress has been made toward this goal in the last 50 years, including a Supreme Court ruling just two weeks ago that gay employees were protected from job discrimination under the Civil Rights Act of 1964, but the fight is far from over. So parade or not, we celebrate 50 years of San Francisco Pride, support the fight for equal rights, and look forward to marching down Market Street again in the future.