In 1876, the nation was only a little over a decade removed from the Civil War that ripped apart the country. So with the centennial of our independence upon us, grand celebrations were planned with the hope of healing the divisions and bringing the country back together.1 In Philadelphia, the Centennial Exposition, the first World’s Fair in the United States, took place.

In San Francisco, then the largest city on the West Coast and one of the ten largest in the country, the centennial got an early start. On December 30, 1875, Mayor A.J. Bryant, named for President Andrew Jackson who was president when he was born, issued a proclamation that the New Year be rung in with five minutes of the fire bells to begin exactly at midnight. Mayor Bryant further suggested that church bells also be rung for 30 minutes. The Chronicle stated that Mayor Bryant did not want to lag behind the “Eastern Sister Cities.2 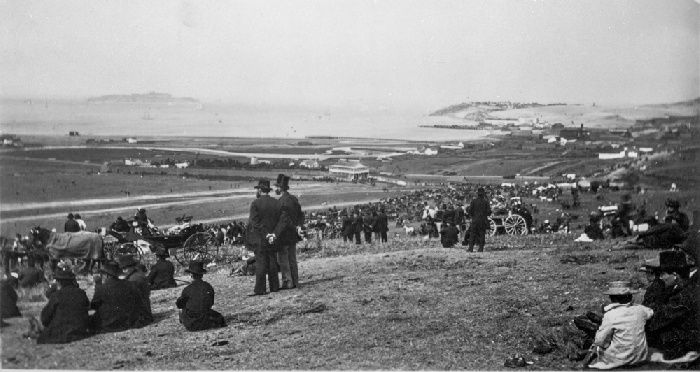 As July 4th approached, San Francisco prepared for a battle. Not a real one, of course. On July 3, 1876, the Presidio staged a mock battle to begin the City’s Independence Day festivities. First thing in the morning, throngs of people began arriving to set up shop on the hills around the Presidio grounds to watch the “battle.” Additionally, people found viewing spots from as far away as Telegraph and Russian Hill and numerous boats filled the waters around the Presidio. Estimates were that a crowd of 85,000 people watched.3

View northeast over Presidio toward Alcatraz and Angel Islands, July 3, 1876. (wnp26.605; Courtesy of a Private Collector)

Before the “battle,” a review was held on the Parade Grounds. Marching in the review were, in order, the Third Regiment, the First Regiment, the Second Regiment, the Vallejo Rifles, the Oakland Guard, two Artillery Corps, and a Cavalry group. Brigadier General McComb of the California National Guard presided over the ensuing exercises and he watched over the review along with the Presidio’s commander, General Schofield, and California Governor William Irwin. 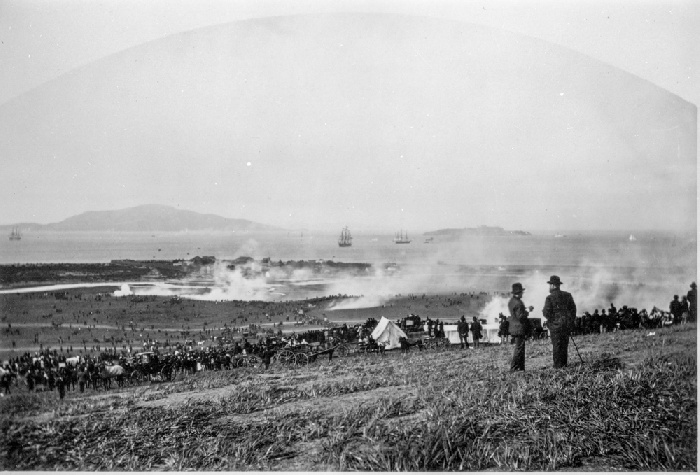 At 11:30 a.m., a naval bombardment from the various batteries ringing the Golden Gate began firing at a rock near Lime Point and a sacrificial fireboat. Shells were also fired from Alcatraz and Angel Islands and several naval vessels. To the dismay of spectators, the boat survived the barrage and a tugboat dispatched a man to set fire to it to remove the “disgrace.” The USS Pensacola fired a blank shell at the boat to make it appear as if its shelling caused the fire. Gusty winds were blamed for the poor markmanship. 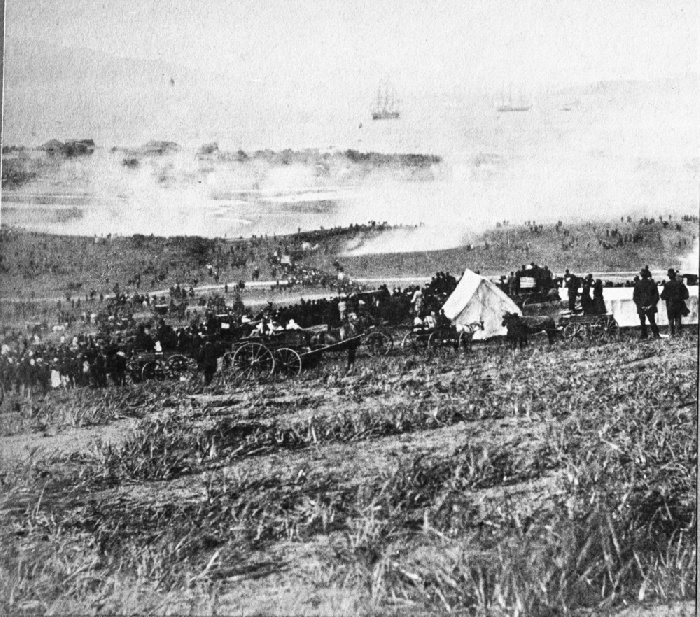 After the naval bombardment, the “battle” paused for lunch. Some spectators left then because they had expected the battlefield exercise to occur before the bombing display and thought the event was over. However, after lunch, the regiments engaged in their mock battle across the Parade Grounds. Soldiers fired with blank shells at the crest of a small ridge. Batteries on the sides fired with a deafening roar. Horse troops were initially held in reserve, but when the batteries stopped, the cavalries engaged in a series of charges. As the images above show, the smoke on the battlefield made parts of the battle hard to see. 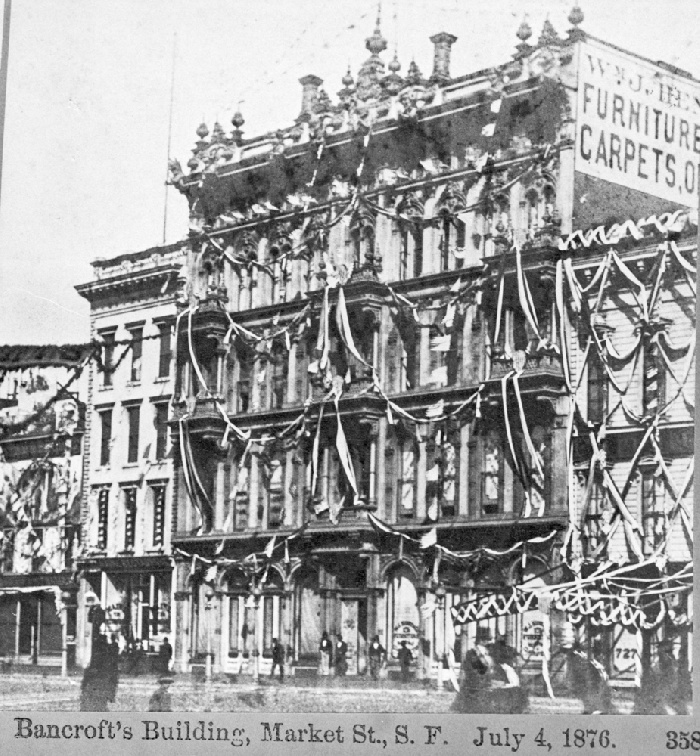 The following day marked the centennial of America’s independence. It started out similarly, with thousands of people pouring into one place to watch the festivities. This time, the place was Market, Kearny, and Montgomery Streets,4 as spectators found their spots for a huge, Independence Day parade. Crowds were so thick, the start of the parade had to be delayed in order for marchers to get there. Finally, however, the parade kicked off with some mounted police, a mounted bugle corps, and then the Grand Marshal, Supervisor D.A. MacDonald of the Twelfth Ward. 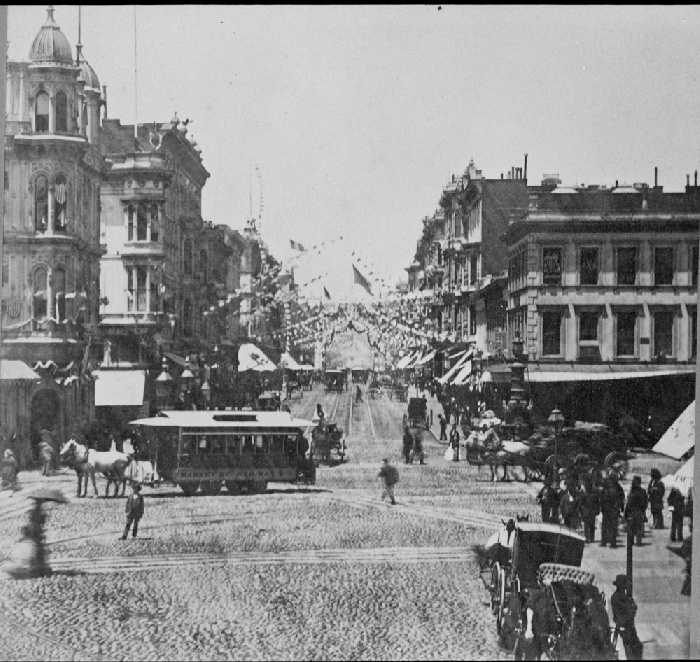 What followed was four miles of marchers that included Mexican War veterans, the National Guard, various local celebrities–called distinguished persons in the news reports of the day–other veterans, Society of California Pioneers members, Odd Fellows, and Native Americans–called Red Men in the news reports–followed up by a horse car representing Columbus landing in the West Indies. This horse car, dressed up to look like a boat landing with Columbus about to step ashore where a few Native Americans stood, would not go over well today. There were many more marchers after that, such as the Knights of Pythias, members of the Riggers’ and Stevedores’ Union, Post Office employees, the German, Irish, and Italian Societies, the Ancient Order of Hiberians, the Brewers’ Association, the Native Sons of the Golden West, a Swiss Philharmonic Band, the Portuguese Benevolent Association, and members of the Milkmen and Butchers’ Unions.

In total, it was estimated that 10,000 marchers paraded in front of 400,000 spectators. Views of the festivities were so in demand that shop windows and balconies were rented out along the route. The day ended with rockets, bonfires, and fireworks. Celebrations went long into the night. The last paragraph of the Chronicle story stated that the Independence Day merriment “[s]urpasses description, and will not likely be duplicated again for the next 100 years.” Parades over the next 100 years, such as the World War II victory parade, the San Francisco Giants arrival parade, and others, proved that statement to be a bit of hyperbole. Nonetheless, San Francisco’s commemoration of the centennial of our country’s independence was one of the grandest fetes in City history.