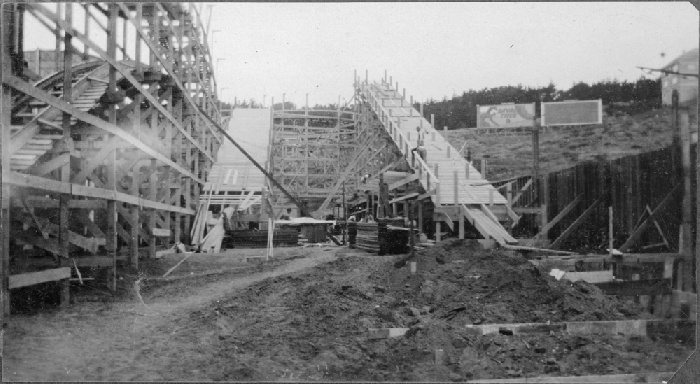 Even before the first Chutes appeared on Haight Street, carnival games and refreshment stands had begun popping up in the 1880s near the terminus of the Park & Ocean Railroad Line at Ocean Beach, just south of the Cliff House. This amusement area was unorganized and the various concessions were individually owned. San Franciscans would come out west on weekends to visit one of the roadhouses, play games, and dip their toes in the ocean. In 1906, Charles I.D. Looff, a master builder of carousels, had plans to install one of his carousels at the Steeple Chase Park at 8th and Market in San Francisco.2 After the great quake and fire on April 18, 1906 destroyed Steeple Chase Park though, Looff sent the carousel to Luna Park in Seattle instead. However, since Luna Park served alcohol, Looff finally moved the carousel back to San Francisco in 1913 and placed it among the concessions at Ocean Beach. It was advertised as the Looff Hippodrome. 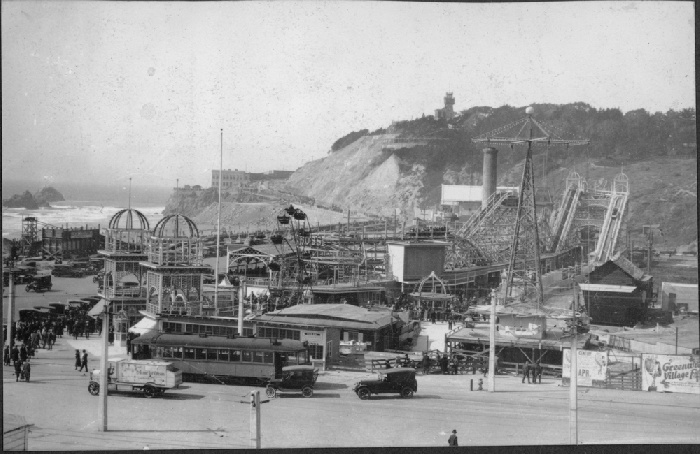 Looff died in 1918 and his youngest son, Arthur, took over the family’s West Coast operations, including the Ocean Beach carousel. There he got to know John Friedle, who ran a candy stand and some game concessions. Together, they began ambitious plans to turn the north Ocean Beach area into an amusement park to rival Coney Island in New York. They formed a partnership, simply called Friedle & Looff. With Looff’s building skills and Friedle’s management expertise, they installed the “Old Mill,” a thousand-foot long water ride in a tunnel featuring exotic scenes, and the “Figure Eight” roller coaster.3 However, the coup de grace came with the acquisition of a license to use a block of property just to the south of Sutro Heights. 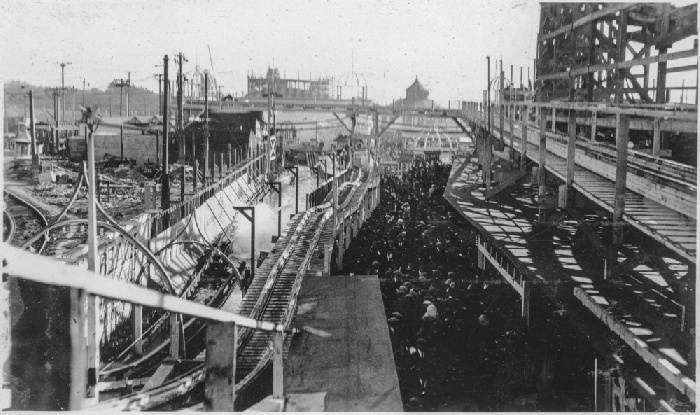 The centerpiece of Friedle and Looff’s grand amusement park plans was a new “Shoot-the-Chutes” ride, which they claimed to be the biggest in America. Built at Balboa and La Playa facing south, the Chutes towered over the the rest of the park. Capitalizing on the popularity of previous Chutes rides at other locations in the City, Friedle and Looff in 1921 named their burgeoning amusement park, Chutes at the Beach. 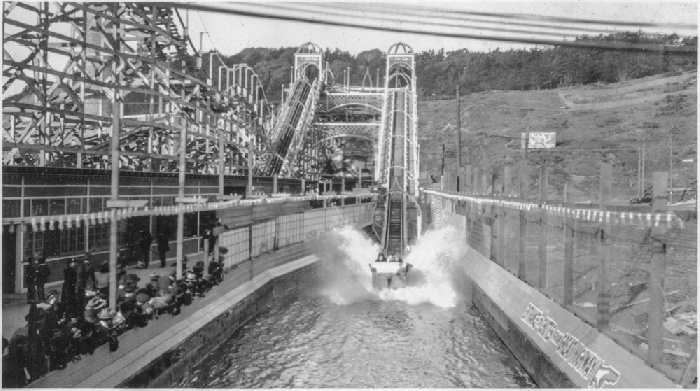 By the end of 1921, Friedle & Looff had 10 rides, including the Shoot-the-Chutes. The “Coney Island” of San Francisco was a rousing success, attracting tens of thousands of people on Sundays and holidays.4 The following year, they added the Big Dipper roller coaster which had big drops and cars moved quite fast on it. While Friedle and Looff got along well, apparently their wives clashed and it resulted in Friedle buying Looff out of the Chutes at the Beach partnership in 1923. Friedle’s brother William began acting as John’s second-in-command. 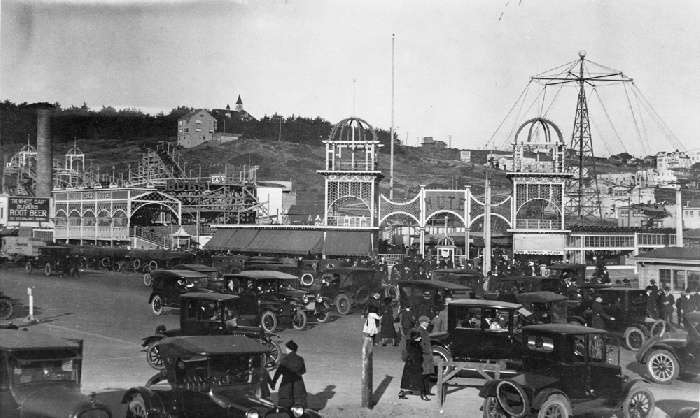 In 1923, George Whitney arrived and purchased a shooting gallery at the amusement park. He continued to acquire other concessions, by himself at first and later with his brother Leo. The Whitneys photo studio proved to be very popular as George was able to rapidly develop the photos and deliver them on the same day they were taken. Meanwhile, several lawsuits against Chutes at the Beach worried Friedle. The exact date is unclear, but sometime in the late 1920s, Friedle sold Chutes at the Beach to the Whitney Brothers and went back to his native Germany. His brother William stayed and retained ownership of the Looff’s Hippodrome, Big Dipper, and Chutes Tavern. The Whitneys renamed the park officially calling it Whitney’s at the Beach, but it was generally known and advertised as Playland at the Beach. 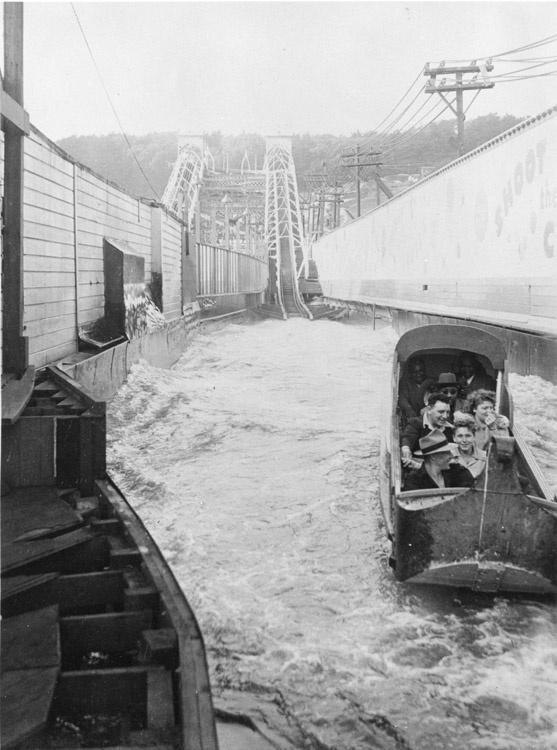 Bottom of the Shoot-the-Chutes ride at Chutes at the Beach, circa 1930. (wnp4.0995; Courtesy of a Private Collector)

During the 1930s, Playland at the Beach managed to get through the Great Depression with the Whitneys even buying, refurbishing, and reopening the Cliff House on August 5, 1938.5 Leo Whitney retired in 1939, but George continued to run the park. Playland thrived during World War II because San Francisco was a major military launching point for Pacific Ocean operations. The park expanded to four full city blocks between Fulton and Cabrillo Streets on the north and south and 48th Avenue and the Great Highway to the east and west. It also included the former Ocean Beach Pavilion to the north of Balboa Street on the Great Highway. 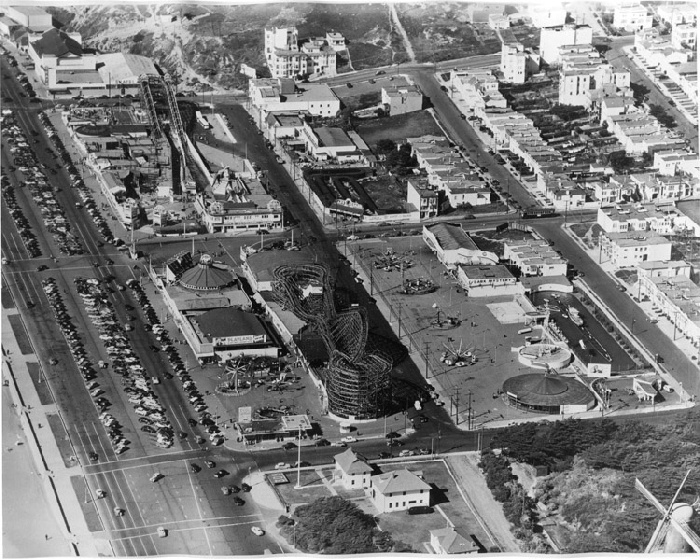 Aerial view of Playland with Shoot-the-Chutes ride, circa 1949. (wnp4.0939; Courtesy of a Private Collector)

While Playland was doing well in the post-World War II years, the Shoot-the-Chutes ride, nearing 30 years of existence, was not as exciting as some of the other rides and no longer as popular as it once was. It also took up a lot of space. On February 15, 1950, the Shoot-the-Chutes ride was demolished. After George Whitney’s death in 1958, Playland itself went into decline. It would finally close on September 4, 1972. It would be demolished and replaced by condos. The Chutes had been a San Francisco mainstay for the better part of 50 years, but their era was now over.