Beginning in 1854 with the establishment of what was eventually called the Laurel Hill Cemetery, the Lone Mountain area became the original “city of the dead” for San Francisco. Laurel Hill was found to the north of Geary between Presidio and Parker, where you would now find part of the UCSF campus and the Laurel Heights neighborhood. In 1860, the Roman Catholic church bought the land between Geary and Turk and east of Masonic to open the Calvary Cemetery. Today, you would go shopping there at the City Center complex. In 1864, the Masons fraternal organization opened the Masonic Cemetery on the south slope of Lone Mountain, where you would find USF today.

The reason these cemeteries were located in the Lone Mountain area was that in the 1850s and 1860s, this area was so far out of town that they were, in fact, outside the city limits of San Francisco at that time. It wasn’t until 1866 that the Outside Lands Act brought this area into city limits. After the Masons opened their cemetery, the third cemetery on the slopes of Lone Mountain, another fraternal organization followed suit. 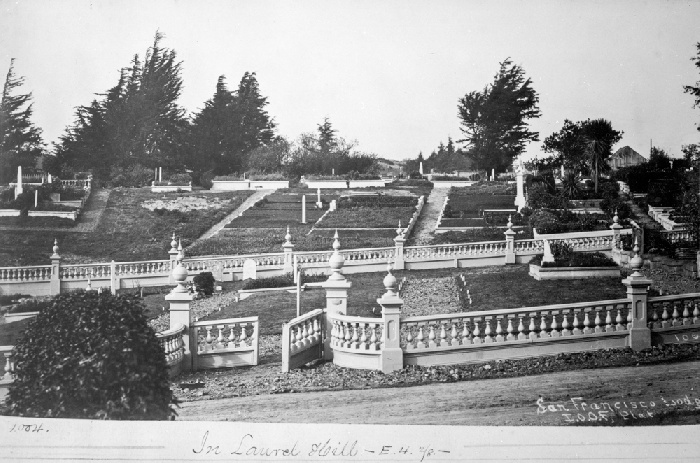 155 years ago this week, on November 19, 1865, the Independent Order of Odd Fellows opened their own cemetery. The Odd Fellows Cemetery was located on the west slope of Lone Mountain, between Geary and Turk and west of Parker. At that time, there were very few public parks to be found, so cemeteries were developed as “green space” with park-like landscaping. 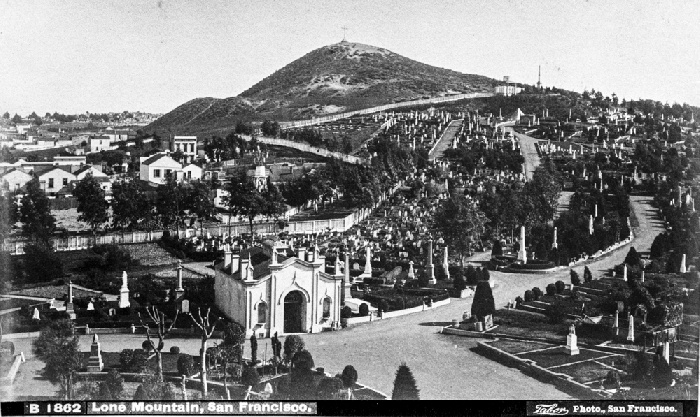 Although this was the Odd Fellows’ cemetery, others could buy plots there and some groups purchased sections there. One was a Greek Cemetery section near today’s Stanyan and Golden Gate intersection. The Grand Army of the Republic, the Civil War Veteran’s group, purchased a plat of land there and would hold Memorial Day parades that started downtown and ended at the Odd Fellows Cemetery. 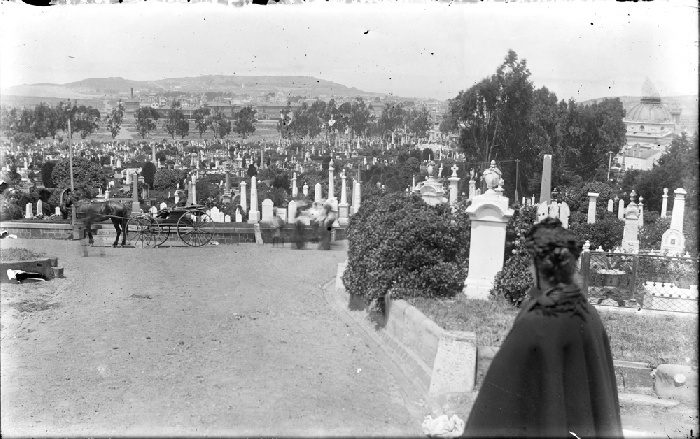 Perhaps the most prominent person interred at the Odd Fellows Cemetery was Charles de Young, the co-founder (with his brother Henry) and publisher of the San Francisco Chronicle newspaper. De Young was shot and killed on April 23, 1880 by the son of the mayor of San Francisco, the culmination of an escalating feud between the mayor and the newspaperman. The funeral service for de Young, an Odd Fellow member, began at his home on Eddy Street. Then a procession of carriages took him to his not-so-final resting place (we’ll get to that) at the Odd Fellows Cemetery.1 De Young’s widow later had a magnificent monument to her husband built at the cemetery near the entrance. Perhaps not surprisingly considering the source, the entrance to the Odd Fellows Cemetery was later cited as the “most picturesque of any of the cemeteries.2” 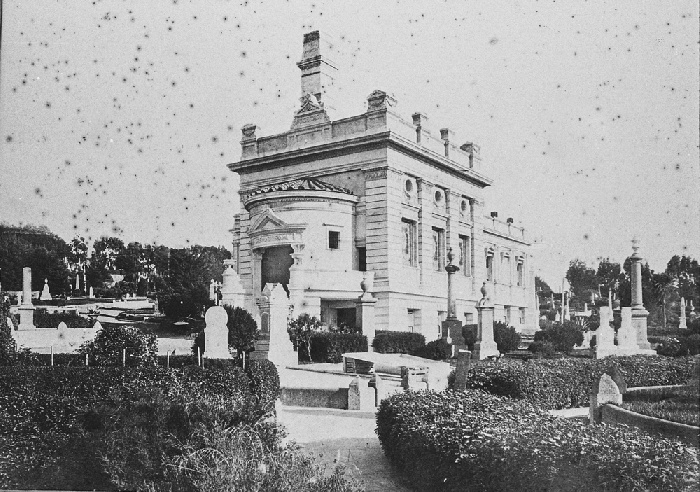 The Odd Fellows Cemetery was funded by the sale of gravesites, from which the grounds were maintained. As the cemetery filled up though, there was no longer sufficient monies to keep the site up and it began to look worse for the wear. Consequently, the Odd Fellows looked for a new source of funding. Their solution, in 1895, was to open a crematorium on the grounds and began advertising cremation as an alternative to burial. 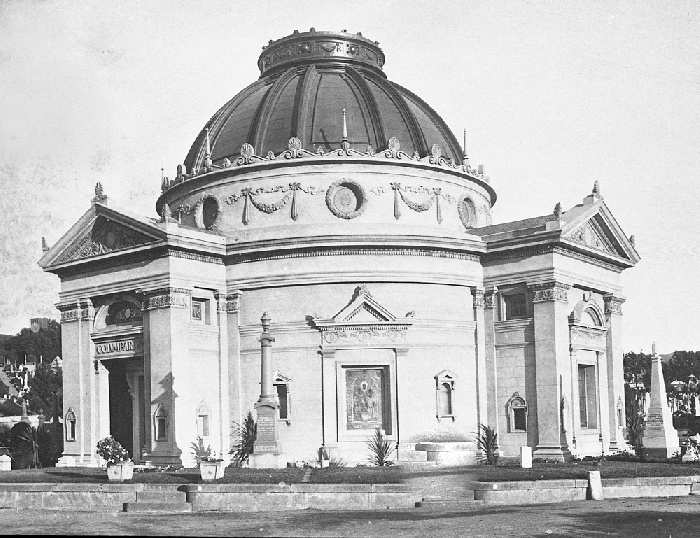 Of course, once someone was cremated, you might need a place to store the ashes. So the Odd Fellows Cemetery opened a striking new building called the Columbarium. It was designed by architect Bernard J.S. Cahill in a neo-Classical style and featured a copper dome. Construction started just after Easter in 18973 and was completed around the end of the year,4 in time to be opened in early 1898. 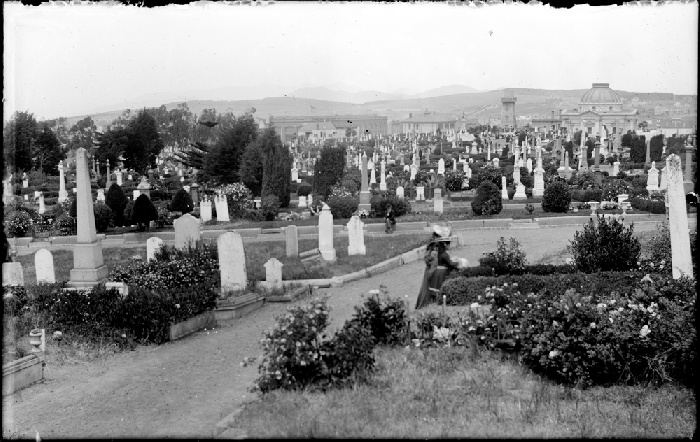 While Odd Fellows and its fellow Lone Mountain cemeteries started out in the boonies, San Francisco quickly spread westward to and past the cemeteries. As early as the 1880s, there were calls to move the cemeteries in order to put the land to better use, although couched in terms of the potential health hazards of having cemeteries so close to the population. On March 26, 1900, the supervisors passed an ordinance prohibiting burials within city limits, which would take effect on August 1, 1901.5 The ultimate goal was the removal of the cemeteries completely and the Odd Fellows saw the writing on the wall. As with other cemeteries, they looked south to Colma and purchased land there in 1904 for a new cemetery which they named Green Lawn Cemetery. 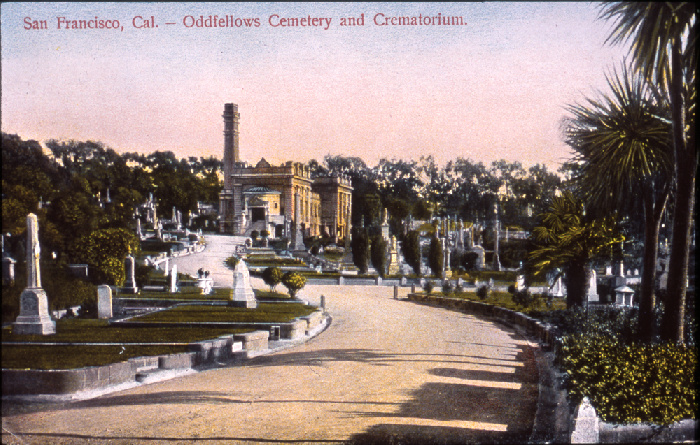 After banning burials, San Francisco, on November 21, 1910, took the next step and banned cremations within city limits.6 The same year, the United States Supreme Court upheld the City’s ban on burials.7 Although it would not be until the 1930s before the City began forcing Odd Fellows and other cemeteries to remove bodies, the end was nigh. Relatives of the deceased at Odd Fellows Cemetery were given notice in 1912 to move their loved ones. Charles de Young, as one example, was moved to Cypress Lawn Memorial Park in Colma. In 1932, some 26,000 graves were moved from the Odd Fellows Cemetery to Green Lawn Cemetery. 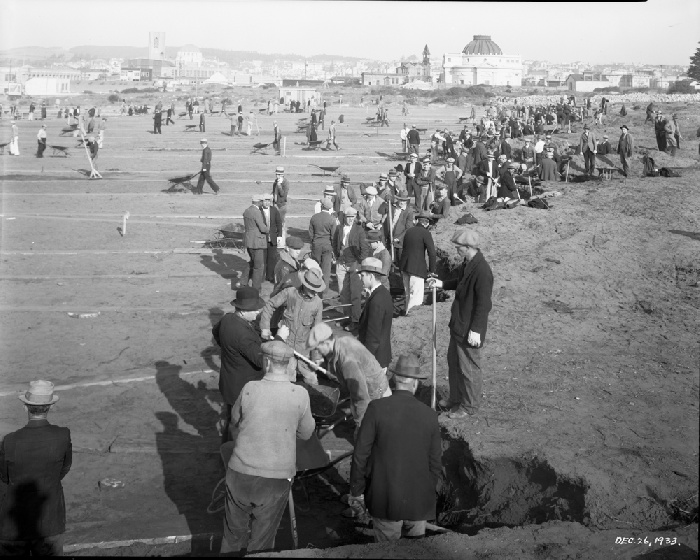 By the end of 1933, San Francisco was rapidly converting a portion of the Odd Fellows Cemetery grounds into Rossi Playground. In 1949, the Coronet Theatre opened on Geary on a small part of the former Odd Fellows Cemetery. Other public, private, and governmental uses were made of the cemetery land. However, one part of the Odd Fellows Cemetery still remains. The Columbarian was allowed to stay and it passed through different owners over the years, but eventually fell into disrepair. Finally, it was purchased by the Neptune Society, which rededicated it on September 10, 1980 and began a long and costly restoration effort.8 It can still be visited today, though perhaps not while the pandemic continues to rage.