In the days before automobiles, roads were sometimes an iffy proposition. In the early days of the Outside Lands, traveling to the ocean meant making your way through miles of sand dunes. In the early 1860s, a group of people formed the Point Lobos Toll Road Company and built a road out to Point Lobos, where the Cliff House was attracting visitors. The toll road originally started at Kearny and Clay Streets, but when streetcar service reached the Lone Mountain cemeteries, the beginning of the toll road was switched to that point.1 It was not the type of road you would find today. Rather, it was dirt and wooden planks across sand. Still it was easier than trudging across sand dunes.

As the Richmond District grew and other roads and streetcars reached the ocean, the Point Lobos Toll Road was not as profitable and it was sold to San Francisco for $26,587 in 1878.2 The portion of now Point Lobos Avenue east of 42nd Avenue was eventually renamed Geary Boulevard. Point Lobos Avenue now ran from 42nd Avenue west to the Cliff House where it turned south and continued down to Balboa Street to meet the Great Highway. This small stretch of road was very popular, however, with the Cliff House, Sutro Baths and other small shops and concessions. Still, it was a dirt road which sometimes became tricky to travel, particularly during the rainy season and occasional rock slides from Sutro Heights. So San Francisco decided Point Lobos Avenue needed a makeover. 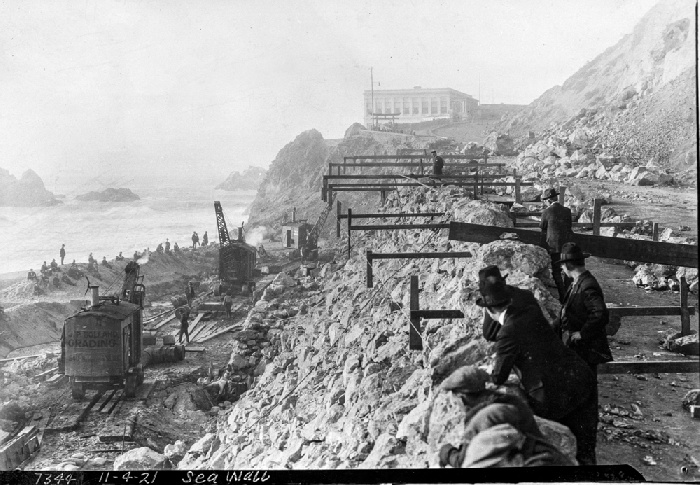 With the passage of the 18th Amendment on January 16, 1919 and Prohibition taking effect one year later, the Cliff House had a problem. No longer able to serve alcohol, business lagged despite the promotion of coffee service. In addition, Point Lobos Avenue in the Cliff House area was in “deplorable” condition with ditches, holes, and rocks that caused damage to automobiles.3 With reduced traffic to the Cliff House, San Francisco began planning to widen and pave Point Lobos Avenue to make it safer. 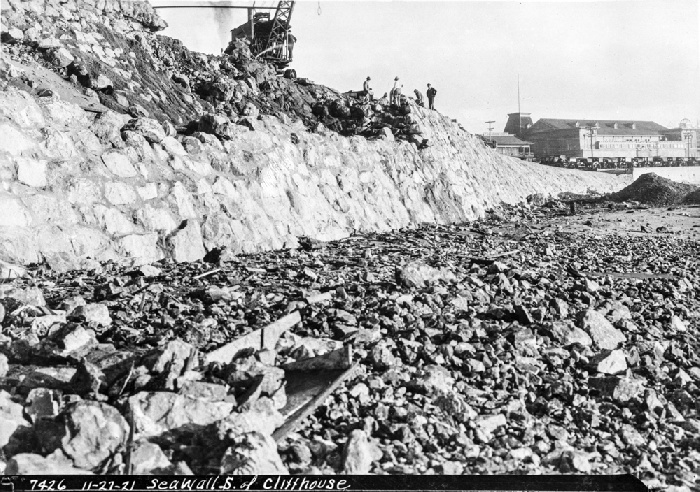 On September 23, 1921, a contract was awarded to the lowest bidder, Clarence B. Eaton, for the work.4 One of the first things to be done was to widen the road down the hill from the Cliff House. To accomplish this, a seawall had to be built to protect the road from the sea near the bottom of the hill where Point Lobos Avenue meets the Great Highway. 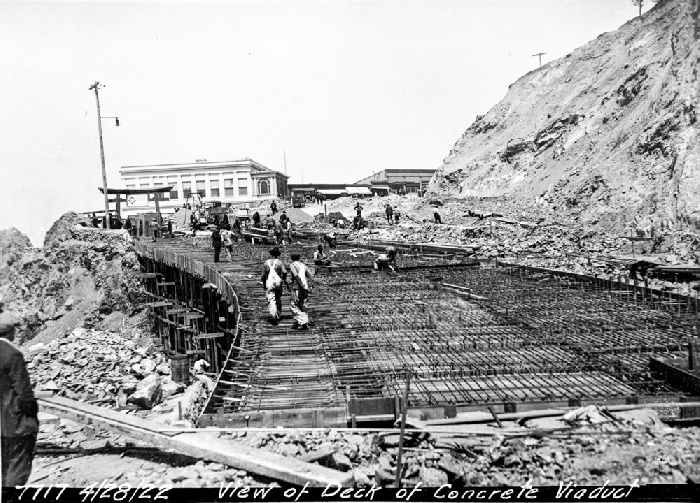 Further up the hill, a viaduct had to be built to increase the width of the road. Did you know that you were driving over a bridge as you come down the hill from the Cliff House? You might not know that unless you have spent some time walking in the sand in the Kelly’s Cove portion of Ocean Beach. This work involved the pouring of concrete for the viaduct supports and the base of the roadway. 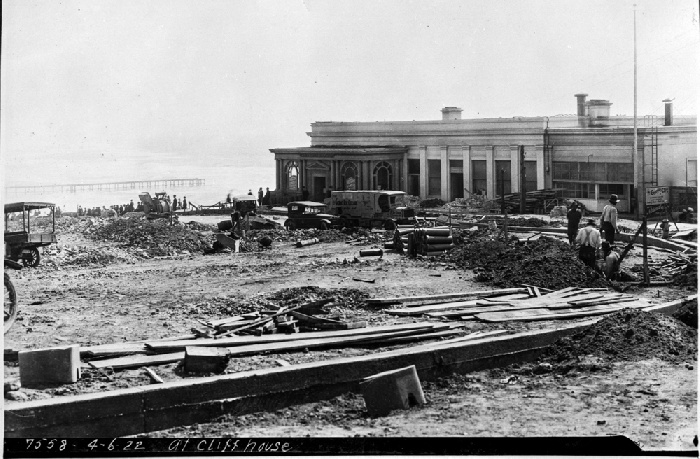 In the area around the Cliff House and Sutro Baths, the road was widened for traffic, parking, and a sidewalk. The Sutro Heights cliff area on the east side of Point Lobos Avenue, was chiseled into, both for the widening of the road and to stabilize the cliff to protect against rockfalls. 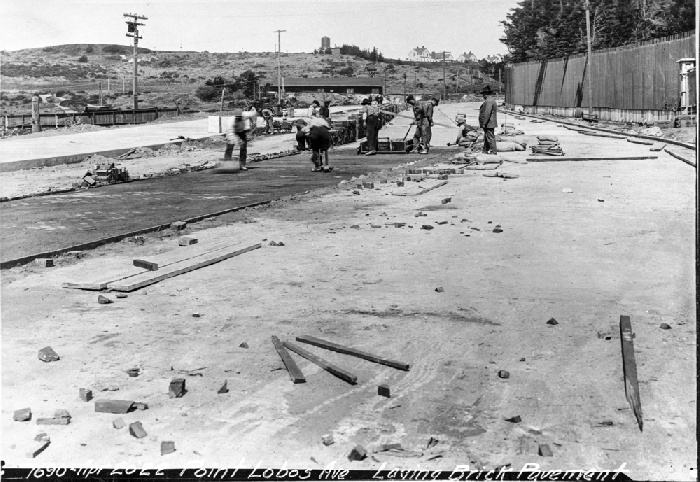 At the top of the hill above the Sutro Baths, work was easier. There was the widening and paving of the road, but there was no cliff above to be dealt with. The sidewalk being constructed extended all the way up to the streetcar depot up at 48th Avenue. 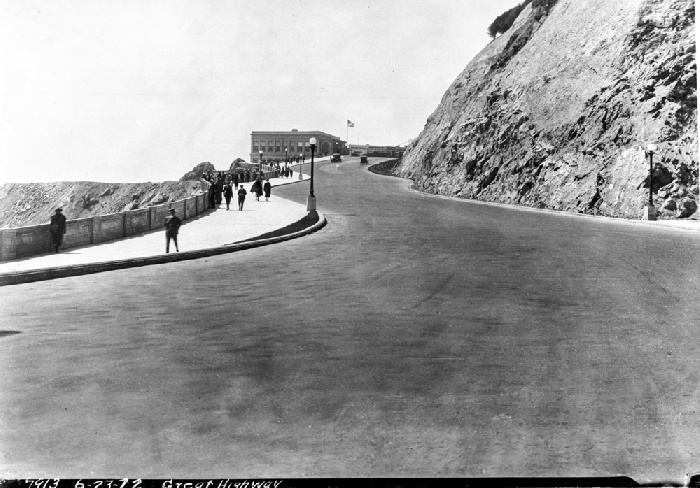 The work on Point Lobos Road was completed by June 1922. The Chronicle described the new roadway as “a wonderfully scenic path for the motoring public.5” The center of the road contained vitrified brick–a brick fired at a higher temperature and longer time to reduce the absorption of water–to diminish skidding on the road during rains. The outer part of the road was bituminized to reduce dust and corrosion. 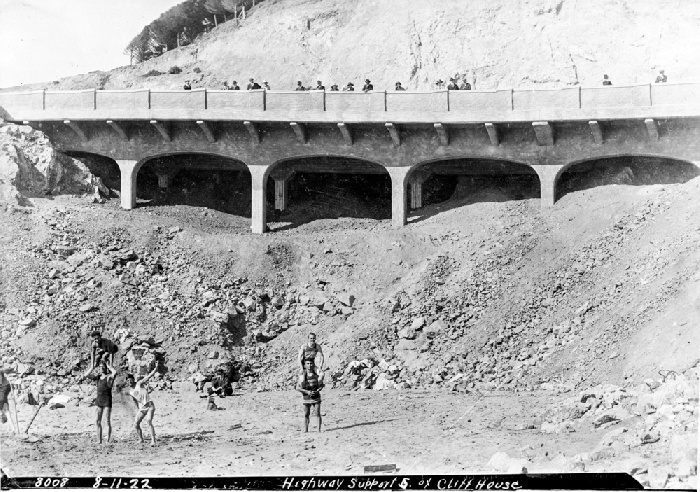 In addition to the road, the sidewalk they built extended from 48th Avenue down past the Cliff House all the way to the beach. Despite the new roadway though, the Cliff House, then run by Richard “Shorty” Roberts, wasn’t making it as a coffee shop. With his lease up, Roberts gave up and closed his version of the Cliff House in the Fall of 1925.6 Prohibition was blamed for the Cliff House’s downfall. It would remain shuttered until August 5, 1937, when the Whitney Brothers reopened it after extensive remodeling.7 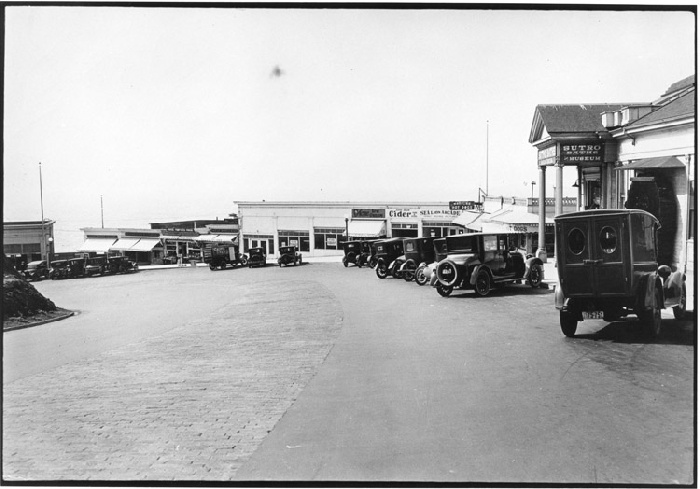