A little over a month ago, we told you about San Francisco’s second biggest snow fall, the 3.5 inches that fell on December 31. 1882. As we mentioned at that time, the 1880s saw a lot–by San Francisco standards–of snow. In fact, a little over four years after that New Year’s Eve snow of 1882, the largest recorded snowfall in San Francisco’s history occurred. On February 5, 1887. an average of 3.7 inches of snow blanketed the City.

Unlike 1882, when the day started with clear skies, San Franciscans woke up on Saturday, February 5, 1887 to find snow on the ground. It started coming down around 3:00 a.m. and kept coming down for many hours.1 While children may have been disappointed that the snow wasn’t canceling a school day, they did not waste time getting outside to have fun in it. Makeshift sleds were made to slide down hills and more than a few snowballs were launched. 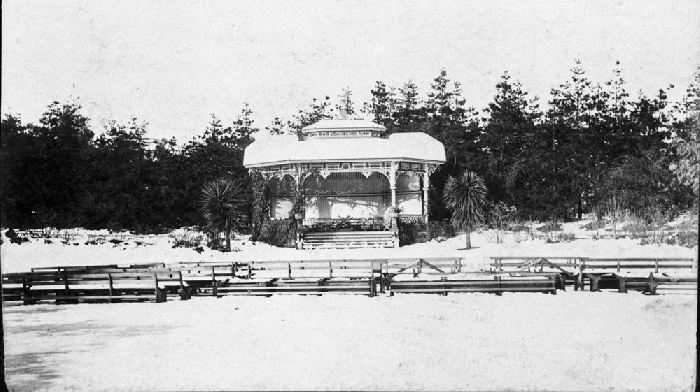 The hill on Haight Street became the site of the formation of San Francisco’s first toboggan club that day. Some transplanted New Yorkers quickly built a toboggan and named it “Major Macfarlane” after a former editor of the Albany [New York] Press. Thomas Doolan was elected club captain and Judge Pennie was chosen to be the steersman of the toboggan. Trial runs down Haight’s hill then commenced. 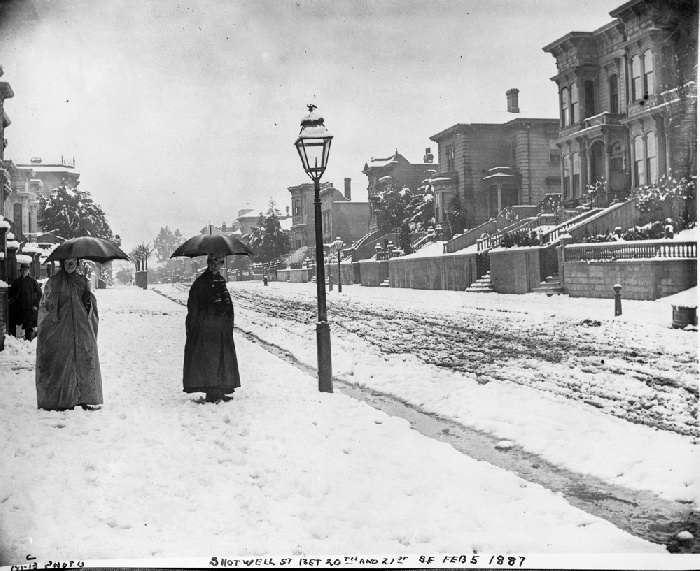 While the kids were having fun, streetcar drivers and passengers were less amused as they were frequent targets of snowball assaults. The snow was slushy, ideal for forming snowballs, but harsh for recipients. The artillery broke windows on Market, Sutter, Larkin, and Polk streetcars. Passengers and conductors could huddle inside the streetcars, both for warmth and to avoid getting hit directly by a slushy missile. Unfortunate gripmen had no such cover and suffered as a result. Horse-car drivers similarly received the brunt of snowball barrages. One streetcar slid off its track turning from Polk onto Post and struck a poultry wagon sending its driver to the hospital. 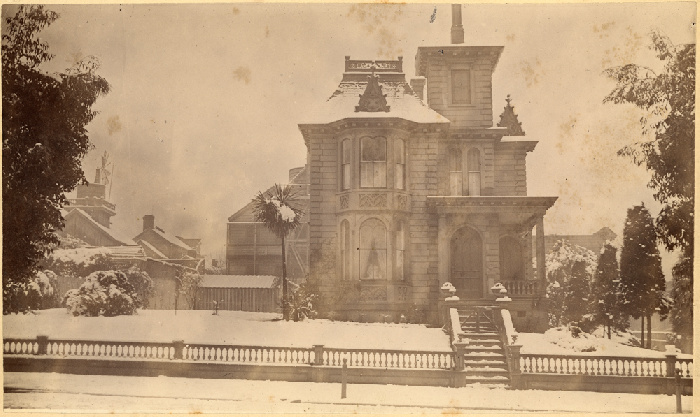 The downside to the snowball wars was a fair amount of injuries and property damage. Worse still was the targeting of any Chinese person who dared leave Chinatown by roving gangs of white men and boys. They were “unmercifully mauled” declared the Chronicle, who described it as “race strife” in which the “Chinese fared badly.” If a Chinese person crossed Kearney Street, they would get targeted by hundreds of whites and, if they dared to fire back, they would get beaten as well as pummeled by snowballs. In retaliation, whites who ventured into Chinatown would get pelted with snowballs and stones. In a few places, rivals fired across the street at each other from rooftops. This strife led to a number of arrests for battery and malicious mischief. 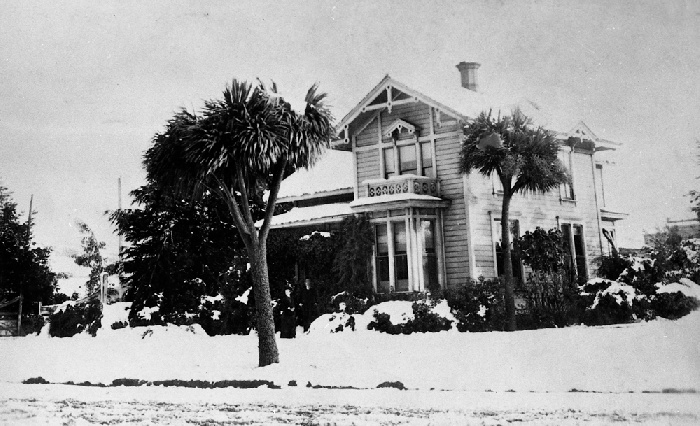 Probably first Park Lodge at corner of Stanyan and Oak after snowfall, February 5, 1887. (wnp33.00931; Courtesy of a Private Collector)

Golden Gate Park received some of the deepest accumulations. Park workers measured the snow at ten inches to one foot in some areas. Although there was some broken windows at the Conservatory and some tree branches that faltered under the weight of the snow, the Park came through largely unscathed. Park Superintendent J.J. McEwen thought the moisture would benefit the plants and that the trees might be better off with their snow-induced trimming. 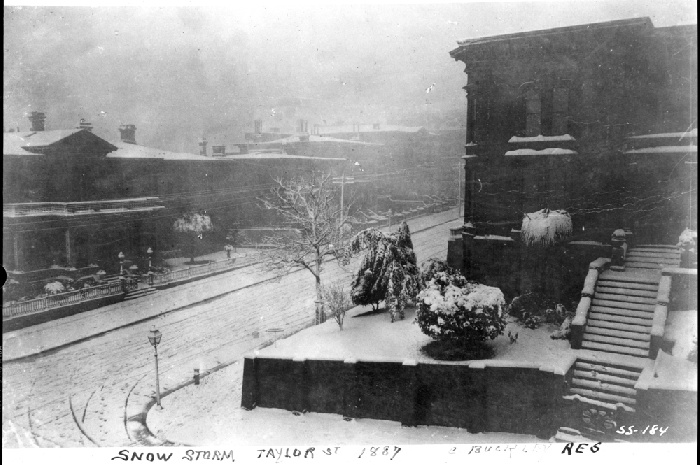 Since the nearly 4-inch average snowfall of February 5, 1887, San Francisco has seen little snow and never as much accumulation. Six storms–in 1888, 1896, 1932, 1952, 1962, and 1976–have dropped flakes across the City since then, but never more than an inch average with some larger aggregations at the highest elevations. Coincidentally, San Francisco’s last snow in 1976 also fell on February 5th, making it the snowiest date in City history. 45 years have passed since then, the longest snowless gap the City has experienced. Will we see snow in the City again? Time will tell.